The Spec Core Team has spent this week working on getting MSC2312 (Matrix URI Scheme) over the line, which is really exciting! Otherwise the team has been reviewing MSC2304 (knocking). 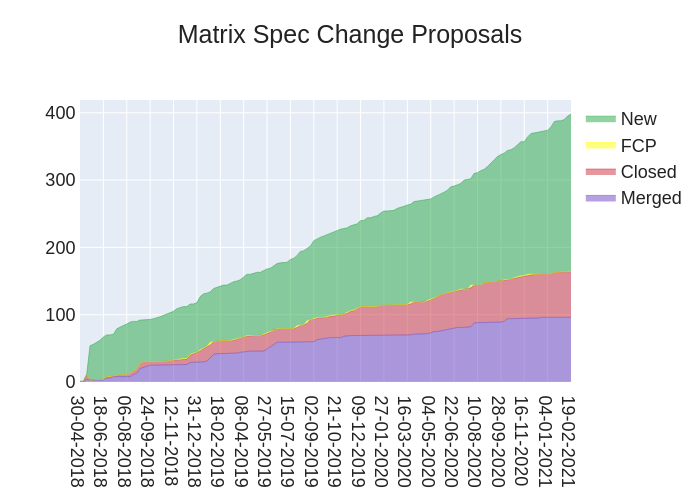 Soru has been working on experimenting with / designing a way to improve push systems within the matrix ecosystem, so that ideally clients can display full event contents in a notification and dispose of specific push notifications without the need for any extra HTTP calls. This lead her to making MSC3013 (encrypted push), so that no gateway is able to read event contents pushed down to the client and MSC3014, so that the client can know which rooms have been read on other devices, allowing them to dispose push notifications.

This is more than just MSCs already, soru already got encrypted push in a patched synapse and a patched fluffychat working locally, and it is working super great!

Dunno soru is just really excited about this somehow >~< 🦊

Let's talk more about Hedwig: This is a push gateway for matrix and an alternative to Sygnal. Hedwig is completely written from scratch in Rust (Yes! Rust!) and offers the basic functionality to forward matrix push notifications to Firebase Cloud Messaging. That's it. Nothing more. It is intended to be as lightweight as possible and so it is very fast and stable. Just change a simple config.toml file and run the binary. There are docs for how you can configure a proxy in Apache2 and an example systemD service file. Currently it only supports event_id_only formatted notifications but maybe, in the future, we expand this functionality.

This week we released Dendrite 0.3.10, and have committed a couple more fixes to master:

Synapse 1.27 is out, and you can read all about it on the Matrix Blog! This is the version that powered FOSDEM, and we're super proud of it. Especially the much improved support for multiple social login providers, which debuted at FOSDEM and is now enabled on matrix.org.

In addition to all the performance, stability, and social login improvements, there are two important things to note:

It took us a bit longer than usual to get 1.27 out the door, so we're also pleased to announce that 1.28.0rc1 is also now available, and we expect to release it early next week. Keep your eyes peeled for more on that next week!

The rejiggering to allow arbitrary images for the Kubernetes chart got delayed due to lack of time, but 1.27.0 should hopefully be the last version with that limitation.

Nio has seen some great improvements since the last update, mostly thanks to gaining a new main contributor \o/

Join us in #niochat:matrix.org for more details 😊

FluffyChat 0.27.0 is out. Not with the new design but with some minor design improvements like the return of the presence list top bar (or whatever you would name it!). Also this release brings a lot of bug fixes, working bootstrapping and the switch to our new Push Gateway (in Rust) we have invented inside of Famedly. You can find it here: https://gitlab.com/famedly/services/hedwig

I am on the brink of buying one of these! 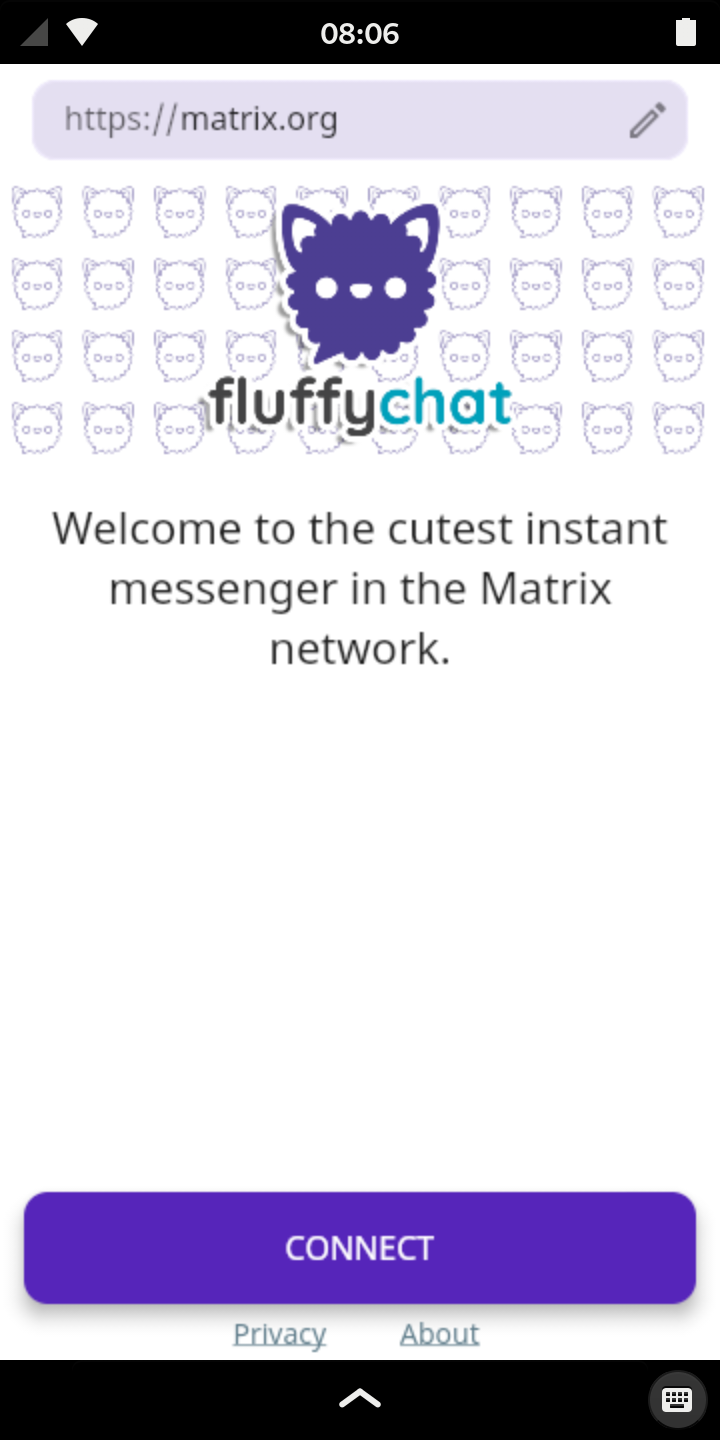 We had a fun week this time. Today I tested trilenes screen sharing code, which seems to work pretty well on X11, although it only shares the full screen atm. I expect window sharing to land next week though. We also ran into some issues with matrix.org enabling optional SSO login, which locked some people out of their accounts, since Nheko preferred SSO login in that case... This is now fixed and in such cases you will be offered both login flows.

Jedi18 also added a room name completer, which means you can finally complete aliases when typing them! The room settings were also ported to Qml and now actually show the room topic. Apart from that there were various UX fixes here ad there, like hovering actually working properly now, emote messages formatting correctly in notifications and more. We also adapted the matrix: uri support to the latest changes, although the MSC is a bit volatile atm, so it may need some more adaptions over time.

I think that's all, have a nice weekend everyone!

I'm back working on Hydrogen, and started to tackle logging to be able to diagnose problems better. I've opted for a structured log format in JSON that gives a tree of log nodes for an entire operation (e.g. sync, or sending a message, ...) which will be more compact and should also be easier to find patterns in than a pure line based format. I had hoped to get that out in a release by today but didn't get as far as I hoped, so should get released early next week. 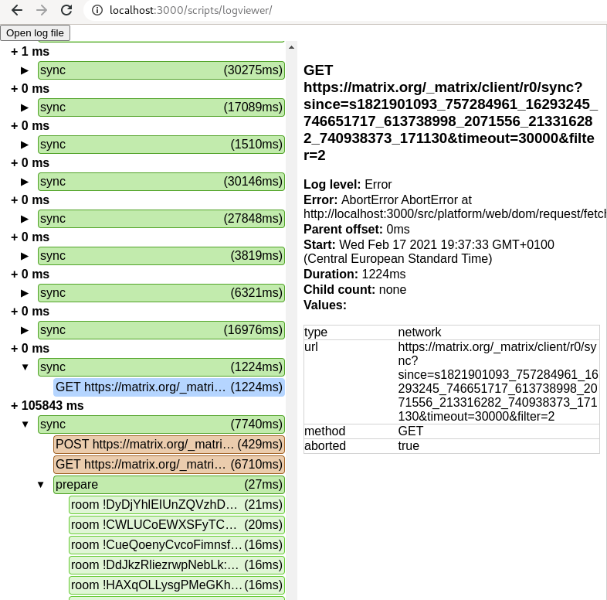 After lots and lots of work (done over many months by Marcel Partap, Max Klenk, a few others from the Technical University of Dresden, Germany and various other contributors), support for Synapse workers has finally landed in matrix-docker-ansible-deploy. 🚀

Learn more from our changelog announcement.

Thanks to Cody Neiman, matrix-docker-ansible-deploy can now install the mx-puppet-groupme bridge for bridging to GroupMe.

This brings the total number of bridges supported by the playbook up to 18. See all supported bridges here.

To get started, follow our Setting up MX Puppet GroupMe docs.

synadm is growing! Pull requests have been submitted, issues been raised, bugs fixed and quite some user community seems to have evolved around it as it’s regularly mentioned on #synapse:matrix.org

Since it’s first announcement on TWIM in December, notable things happening in the project are:

Have a look at the latest release notes for a complete list of new features and fixes: https://github.com/JOJ0/synadm/releases

Thanks a lot to contributors @hpd, @kaiyou, @schwindp, @aaronraimist and @rht! Keep those PR's and ideas coming! You have been a great help!

Next features on the roadmap are "Purge History API", regular matrix client calls support and login as a user. Help me prioritise features by raising an issue: https://github.com/JOJ0/synadm

Still, I am basically a one man show, and certainly any contributions are warmly welcomed! Even as a non-programmer you can help by keeping the implementation-status list up to date. If you find an admin API missing, please take a minute and use the integrated edit functionality github provides and add it to the list: https://github.com/JOJ0/synadm#implementation-status--commands-list. It helps contributors to quickly find out what feature they could code!

I am also thinking about finding people who'd like to join the team, code new features and help maintain codebase, review PR's, get push access and so on. Spread the word! Join #synadm:peek-a-boo.at!

Seems to be worthy, it's been included anyway!

Oh, and maybe as a side note: Since Steam voice chat failed me one too many times now, I now use Nheko for voice chat, if I just play with one other player. It is more reliable and most people I play with do have a voip capable Matrix client installed!

It seems neochat has made it into the Plasma 5.21 preview video, albeit not quite as one might expect :P

That indeed is an unusual way to get featured, well done NeoChat!