Now that the new spec platform is out, we're looking to unfreeze the spec so that spec PRs can once again start landing. That process has been written up in an issue. Once again thanks to everyone that's given https://spec.matrix.org a try and reported their feedback. 🙂

Work this week from the SCT has focused mainly around Multiple SSO Identity Providers and Spaces (+ Spaces Summaries). 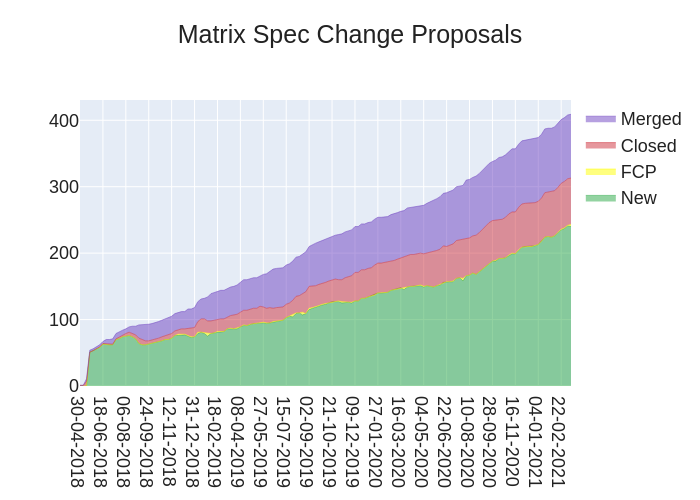 Matrix has been accepted, once again, as a GSOC mentoring organisation! See us on Google's page, check out the list of project ideas (more to come!) and join GSOC Matrix to chat.

(💭 If this gets published every Friday evening, shouldn't it be Last Week in Matrix?)

On Monday we released Synapse 1.29.0! The most visible highlights are new configuration settings which can limit disclosure of user profile information and optionally rank local users higher when searching the user directory. However, we've also made quite a few tweaks under the hood, including some initial improvements to presence performance and allowing the media repository to regenerate missing thumbnails on demand.

The next release of Synapse will focus on mitigating several known inefficiencies and problematic behaviors around federation performance; I look forward to telling you more about that when it reaches release.

We're also excited to announce that we've secured funding to participate in the next round of Outreachy internships. Outreachy encourages people from underrepresented or nontraditional backgrounds to participate in F/OSS. We have funding for one intern and are proposing two possible projects focused on either modernizing Sygnal/Sydent, or extending Complement so it can replace more of SyTest.

More updates for the chart gods! I've pushed new versions of my element-web, matrix-synapse, and matrix-media-repo charts. And a new image tag (1.29.0) for the matrix-synapse image I'm still building, still haven't quite found the time to move everything over from it and into the chart proper.

The charts are still available at https://gitlab.com/ananace/charts, and the #matrix-on-kubernetes:fiksel.info room is still a great place to drop in for questions or general thoughts/comments.

A small-ish release, adds support for decoding and rendering some more m.room.message msgtypes.

The only remaining unsupported msgtype is m.location, hopefully we'll figure out something for that soon.

Come play with the demo: https://cactus.chat

This was the week of internal changes. If you are building from source, the following changes may affect you:

Apart from that, we did also have some cool stuff happening. One thing I want to especially highlight is the push work from tilde. It is one direction that I never thought of Nheko moving in and I think UnifiedPush is a really cool project!

We also switched from inline buttons to a hover overlay for message actions. Please try it out and give us feedback, if that is an improvement or makes the experience worse! It does at least make it clearer, which button belongs to which message, make the interface less messy and scrolling faster.

We also try to suppress the notifications caused by @⁠room mentions, when you reply to such a mention now by inserting a zero width joiner. This seems to work fine for all clients and servers but Element Web... So at least for everyone not using Element Web, if someone replies to an @⁠room as a mod on Nheko, they should not get a notification anymore. (Full disclosure, that was an idea from the FluffyChat team!)

See more about Unified Push below.

libkazv is a sans-io C++ (gnu++17) client library built upon lager. Along with it there is kazv, a kirigami/qml client, and a forward bot between matrix and tencent qq. Talk to us on #kazv:tusooa.xyz

In the past 1 week we ("tusooa and her longcat," we hope someday we can

Made a new Ansible role for running Mautrix-Telegram with Docker: https://git.feneas.org/jaywink/ansible-mautrix-telegram

UnifiedPush, what is it, what happened this week, and why should you care?

UnifiedPush has been specified for Android with some apps implementing it for a few months now, but now I've been working on specifying and implementing it for D-Bus platforms. (This is mostly intended for mobile Linux OSes such as postmarketOS, but any platform with D-Bus will work!) This means I've implemented a Gotify-based distributor that runs on Linux, and also implemented UnifiedPush in nheko to give it the capability to receive push notifications. I've yet to iron out all the details, so push in nheko isn't exactly ready to be released yet, but I can demonstrate with a video!

To you, Matrix client developers who desperately want to receive push notifications and get your app woken up while it is not running (on Linux or Android), this means that you should simply implement UnifiedPush in your app to receive pushes from the user's choice of distributor. (note: D-Bus API is not yet in the spec, but under discussion) How? See https://unifiedpush.org and join #unifiedpush:matrix.org to discuss it further!

Soru, the author of mx-puppet-discord, wanted to add some clarifications for the article:

The section on having to set up your .well-known is slightly incorrect: mx-puppet-discord does normal C-S API discovery, so if your C-S API is not on any subdomain it will already just work, .well-known is just needed in case that differs. Additionally, you can set up a manual mapping in your config.yaml (also helpful if you need http for e.g. local development). This is totally unrelated to setmatrixtoken.

If you have any other questions or need help, please visit #mx-puppet-bridge:sorunome.de , thank you!

Brendan Abolivier shared this weeks ago, and we missed it. But, it's really nice content that doesn't go stale.

I did a talk at FOSDEM 2021 two weeks ago titled "Mental health and free software" in which I talk about my experience dealing with mental health issues while working as a full-time Matrix developer and give leads to address some of these issues. I've uploaded the recording of the talk at https://tube.abolivier.bzh/videos/watch/c28a3957-25cb-4519-ad3d-9f8812f88ee2 🙂