Hello everyone! I'm excited to announce that Conduit has been accepted by Prototype Fund and will be funded by the Federal Ministry of Education and Research over the next 6 months: https://prototypefund.de/project/conduit/

The focus lies on federation support and overall improvement and stability, maybe we will even land version 1.0 at the end.

I am surprised how Conduit went from a small hobby project to a very promising Matrix server in just a year. Thank you all for accompanying me on this journey, I really appreciate it.

Now what did we actually do in the last two weeks?

Conduit is beginning to run fairly well on the state resolution branch, we will probably merge it after fixing the last few bugs.

This is really excellent news! Congratulations to Timo on this achievement!

The Linux Foundation wants to use BigBlueButton and Matrix for the Linux Plumbers Conference in 2021 and is looking for developers to implement various improvements to BBB and to integrate Matrix as the in-meeting chat.

We're still working to unfreeze the spec, but in the meantime have been working on MSC2516 (voice messages) and MSC1772 (spaces) plus the merged and in FCP MSCs you see above. ⬆️ 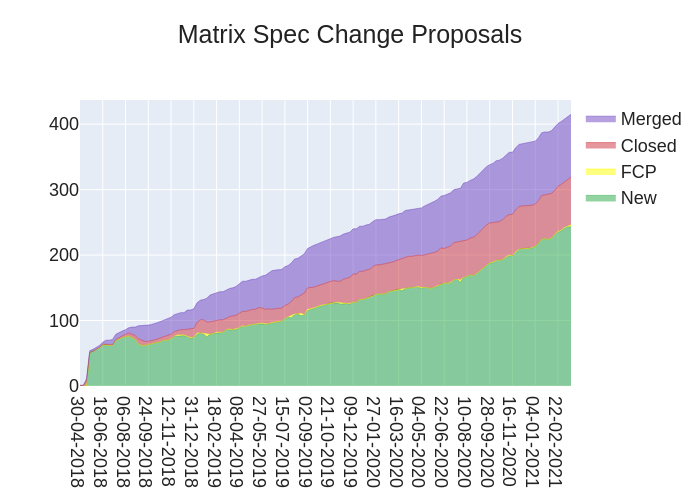 v1.2.5 is out now with several bug fixes and other improvements. The most notable things being:

As always, if you have bugs or encounter problems with setup then please pop by #media-repo:t2bot.io

As I mentioned last week, we've been focusing on nailing down some inefficiencies in federation performance. Well, Synapse 1.30.0rc1 is out, and I'm very excited to share one result of that work:

If you look closely, you'll note an order of magnitude improvement in our handling of the /_matrix/federation/v1/state_ids/{roomId} endpoint. On matrix.org, we've seen that endpoint go from averaging a few seconds of CPU time to well under 100ms. Database usage is similarly reduced.

This improvement by @clokep builds on the chain cover index that @erikjohnston implemented in Synapse 1.26.0 to speed up the calculation of auth chain differences during state resolution.

Synapse 1.30 will be released early next week.

We also shipped Sygnal 0.9.0 today, which has a few minor bug fixes as well an initial prototype of Web Push support, per the Hydrogen update in last week's TWiM.

matrix-puppeteer-line: A bridge for LINE messenger based on running LINE's Chrome extension in Puppeteer.

I ported the native https://nio.chat iPhone client to macOS Big Sur, and call that "Mio". Nio and Mio share the same SwiftUI code base, with the Mio changes being merged into the Nio upstream repository. Like Nio, Mio is still in very early stages but looks quite nice already.

A preliminary build can be downloaded over here: https://zeezide.de/download/Mio.app-0.2.0-2.zip, and I posted a screenshot in the Nio channel: https://matrix-client.matrix.org/_matrix/media/r0/download/matrix.org/RpPiQFJytjXboshcUnqnGwrd. 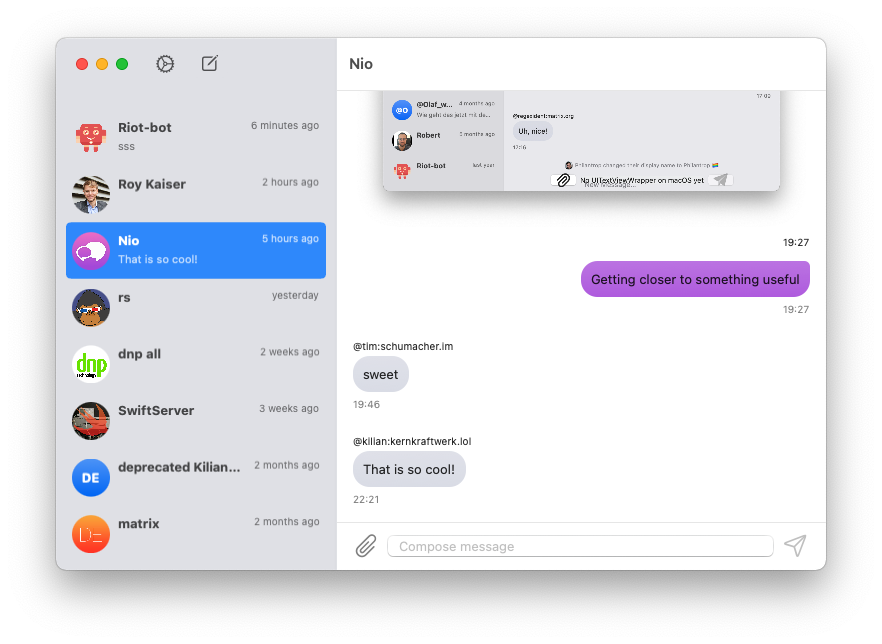 Some time ago we featured Nio running on an M1 Mac via Catalyst, this is being compiled natively for Mac.

Thanks to LorenDB, notifications now omit the reply fallback and show that that message is a reply instead. They also should not break on encrypted rooms anymore (they show that the message was encrypted for now, but they will be decrypted in the future, if that is enabled in the settings). Emotes should now also show up in them properly and if someone sends an unencrypted image, this should show up with a preview in the notification as well. 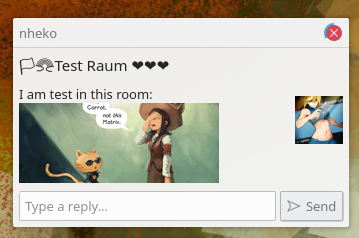 Jedi18 ported the room switcher, which can be accessed with Ctrl+K to Qml, which fixes a lot of readability issues and should improve how the rooms get filtered. 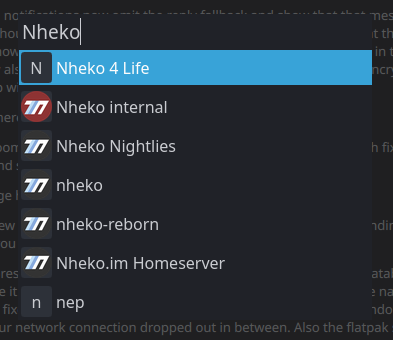 Jedi18 also fixed a few issues with playing video on Windows. Salahmak made sending media easier by allowing you to send the image by just pressing enter.

Nheko now also stores images outside of the database, which should decrease database size in the future and make it easier to clean out that part of the cache. We also now use native menus where possible and fixed a few crypto and sync issues as well as formatting of mentions sent by Nheko. Nheko should now not randomely fail to /sync anymore, if your network connection dropped out in between. Also the flatpak should now be able to use your webcam in more cases, but this means we also use less sandboxing now. If you don't like that, you can disable access to all devices, but that sadly also includes the webcam.

Yet another beta-approximation of Quaternion at version 0.0.95 arrived, with the main change being fonts finally unified throughout the application. Translators are stilll very much welcome (French is almost there to be marked as "sufficiently complete", e.g.). Expect 0.0.95 release in the nearest weeks.

And work on progress:

Element Web 1.7.23 is now available, including:

...along with many smaller fixes.

Polyjuice Client 0.4.0 has been released. This release features support for more endpoints, mostly contributed by two new contributors, multi prise and Arjan Sherpenisse. This release also has some backward-incompatible changes. See the changelog for more information.

Aligned with the Quaternion beta, stability-focused libQuotient 0.6.6 has been released - packagers already using libQuotient 0.6.x branch are strongly encouraged to update to this version.

See our Setting up Go-NEB documentation to get started.

Did you get involved with FOSDEM this year? If you hung out on Matrix that weekend and had a great time, then maybe you bought a t-shirt? Oleg did, and he shared this photo! 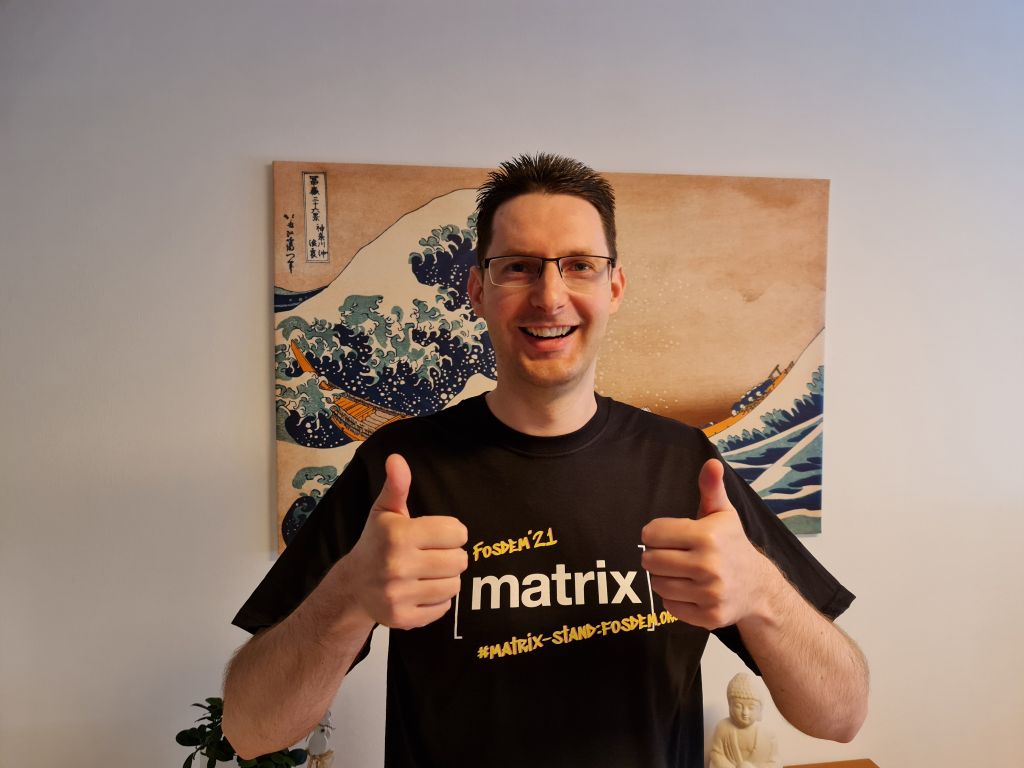