Ben is away this week for some well-deserved holidays (don't worry, he'll be back next week), so I'm filling in for him so you don't miss out on your weekly dose of Matrix-related news, let's do this!

It's demos week this week! Enjoy a selection of demos featuring: Spaces, low-bandwidth Matrix, Hydrogen notifications and bridging DMs between Gitter and Matrix!

Lots of MSCs moving through the pipeline last week and this week!

We're still working on improving our process for day-to-day MSC work, but small individual improvements seem to be adding up! Otherwise some members of the team came together and summarised the team's thoughts on MSC2190.

Still shifting internal infrastructure to allow redirecting from the old spec to the new where necessary. 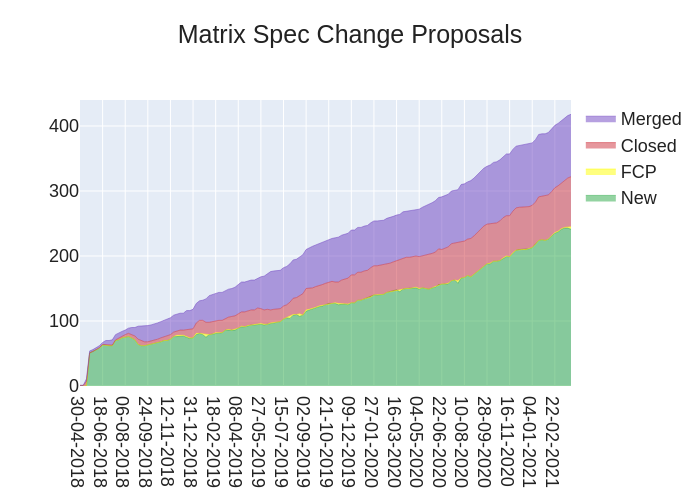 We're proud to announce that Synapse 1.30.0 was released on Monday.

The 1.30 release focused on improving our resilience to interruptions in federation, both being smarter about what work we do, as well as improving the CPU and DB performance of the state_ids endpoint by at least an order of magnitude. Check the release post for full details.

...but also check out this graph (of that endpoint only) from an EMS host after deploying 1.30.0:

That ain't gonna bother us no more.

In other news, we've decided to try out GitHub Actions for automated testing of Synapse and will report back in a few weeks. Our hope is that this makes our CI more amenable to iterative improvement and outside contributions.

It's also worth flagging that the next release of Synapse, due in early April, will be the last to support Python 3.5.

See y'all next week!

v1.2.6 is out now with a guest account patch and some added libraries to the Docker image. It's a small one, but worth the upgrade when there's a few spare cycles to use :)

As always, if you run into problems or have questions, visit #media-repo:t2bot.io

Finally did what I've been talking about for a while, and got the Synapse chart I'm doing upgraded to the point where it won't require my own image any more, Version 2.0.0. (In fact, the chart will now deploy the upstream matrixdotorg/synapse image by default)

I also went through and fixed a bunch of things, refactored the worker config some to get it closer to the generic_worker setup, added configuration to include arbitrary values in .well-known (for Jitsi and the like), etc.

And just updated my Kubernetes image and Helm Chart for Synapse to the new 1.30.0 version - note that the image has been deprecated by now though, the chart is the new go-to way to get Synapse on Kubernetes.

And then, following today's 1.30.1 Synapse update:

This is only useful to people who develop/build their own Matrix client applications.

Additional details are available in our Setting up Sygnal docs.

matrix-puppeteer-line: A bridge for LINE messenger based on running LINE's Chrome extension in Puppeteer.

TODOs: Everything I mentioned last week, except for avatars 🙂

The following is a small taste of what it will look like and will also be included in the upcoming Matrix live demo day.

Hydrogen 0.1.40 got released this week with support for push notifications (look to enable it from the settings) and some other smaller fixes.

(Note that because of a sygnal bug, push messages are sometimes failing to be delivered to mobile. This will be fixed in the coming days without any action needed if you already enable it before.) 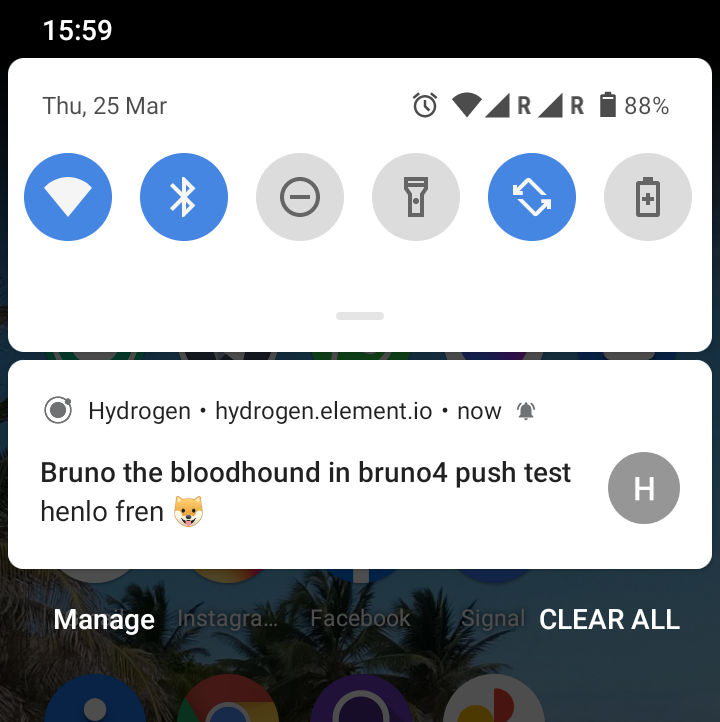 If you want to know more about Hydrogen's new shiny notifications, check out this week's Matrix live (at the top of this post)!

forward bot between matrix and tencent qq. Talk to us on #kazv:tusooa.xyz .

In the past 2 week we ("tusooa and her longcat," we hope someday we can remove this annotation :P):

Just pushed version 2.3.0 of the Matrix Ruby SDK, headline features include; Ruby 3.0 support (though might still be a few niggles in there, expect a 2.3.1 once it's been more tested), a complete redesign of the room data cache to improve memory usage and code quality, and general request additions that people were interested in.

This library allows to write Matrix clients in Scheme Lisp.

I've written a simple little script that connects to CalDav servers and sends me a summary of the events for the day over Matrix. https://gitlab.com/uhoreg/matrix_daily_calendar I find it useful as I don't have enough meetings that I'm constantly checking my calendar, so having a message at the beginning of the day helps me remember the meetings that I do have.

If you forked the CSS to style it yourself, you may want to replace it with the new CSS file and add your changes again, to get the new styling.

Come play with the demo: https://cactus.chat

krazykirby99999 shared with us their guide for creating simple Matrix bots in Python: https://www.reddit.com/r/matrixdotorg/comments/mdqitp/how_to_create_a_matrix_bot/

Hey everyone 👋 One year ago I started to explore combining CRDTs with end-to-end encryption (Matrix's Olm/Megolm) to allow people to collaborate on the same documents/data. Couple months back I got a first prototype working and then evolved to a production ready app. Think of a simple Google Docs, but end-to-end encrypted and offline-first (iOS & Android for now).

This is not a project built directly on Matrix, but I thought it was a very cool use of Matrix's end-to-end encryption library, olm!