From Nico (@deepbluev7:neko.dev), who is assisting with GSoC admin this year:

As already mentioned a few times, this year the Matrix organization is taking part in GSoC again. This is an amazing opportunity for students to take part in various Matrix-related projects and helping those projects implement awesome new features. Submission for this closes on April 13 this year (which is Monday on my clock)! If you want to take part in GSoC as a student, submit your final proposals now! You can find some examples here: http://matrix-org.github.io/gsoc. If you want to submit your own ideas, please contact a potential mentor before that. If you have questions, please check out the #gsoc:matrix.org room.

After a lot of work behind the scenes, we've now officially unfrozen the spec! 🧊 🔨

This means spec PRs that change the actual content of the spec can be made again, and made they certainly have been! Huge thanks to TravisR for writing all of those up (and others for reviewing!), and for the last push of removing all of the old spec toolchain from the matrix-doc repo.

With this out of the way, we move forward migrating the old spec pages over to the new site, as well as to the next release of the spec, which will feature a new global versioning scheme! 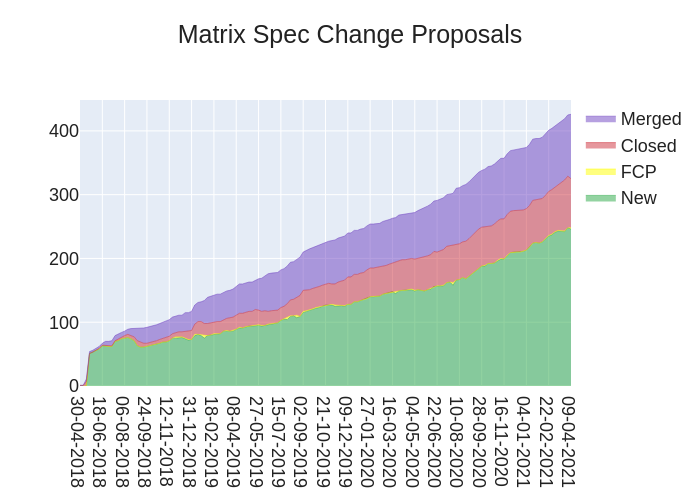 We released Synapse 1.31 on Tuesday. There are certainly nice things in it (read the release notes), but also, two days after that... WE FINALLY REMOVED SUPPORT FOR PYTHON 3.5!

As part of that, we now have a formal deprecation policy that explicitly states our platform support strategy. Namely: we follow upstream lifecycles. Thus, we can say with confidence that we will drop support for Python 3.6 in December of this year. So when upgrading, please do ensure that your operating system of choice provides modern Python packages.

By the way: if you're looking to contribute to Synapse, now is a good time to start grepping for 3.5 or xenial or stretch and seeing what cobwebs turn up which can finally be swept away. 🕸🧹

We're also experimenting with using GitHub Actions for CI, and would certainly appreciate reviews and pull requests from folks who are more knowledgeable in that area, especially around speeding up workflows and caching.

We'll be back next week with more details on the specific quarterly goals the team is committing itself to, but until then, 👋!

I don't know specific change helped, but 1.31 is a noticeable performance improvement for my Synapse, so thanks team!

Been a while since I last updated twim about matrix-registration.

there has also been work on a nix package and module over here:

https://github.com/NixOS/nixpkgs/pull/107654 and a nur package to test it right now:

But here are the newest changes for the just released v0.9.0

There have been a lot of changes to the config file and web api,

please refer to: https://github.com/ZerataX/matrix-registration/releases/tag/v0.9.0 and make sure to check the sample config for other changes you might have missed

and as always feel free to join #matrix-registration:dmnd.sh for support or w/e else!

Updated my Kubernetes chart - and image, for those still using it - to the new Synapse 1.31.0 release.

I sent some messages between two Element web instances this week.

yes, but there's no Mac involved

After finishing push notifications last week, this week I've been getting on top of the bugs that had previously come in, before getting to more feature work. There were 3 releases with 7 bugs fixed, the last release being 0.1.45 just now.

For people that use our Nightlies and Windows at the same time, we fixed our nightly builds for Windows now.

For people often going to the TWIM room, we fixed "TWIM" now actually finding the #thisweekinmatrix:matrix.org room. (We also fixed a lot of other small issues on the side, that are less interesting and hope we can tie a release soonish. :3)

Rather meta, that this fix relates so specifically to TWIM.

In the last weeks, we have landed several smaller features:

We also fixed a lot of smaller issues, including joining rooms from the global room list, emotes, some commands and deletion of images and added lots of visual improvements. We're still investigating a bug that makes NeoChat get stuck on startup, and some fallout from our recent redesign of the timeline.

There is a new library in the wizarding world: Polyjuice Server, an Elixir library to help with writing Matrix homeservers. It is still in the very early stages, but it is starting to take form. Please note that this is just a library and not a homeserver implementation, as I don't want anyone to mistake this for something that's actually useful. (And now that I've scratched this itch, I should attend to my secret personal side-project that I've been neglecting...)

In 20 years, will we look at this small comment from uhoreg and say, that's the first hint of the project that would change the world?

I finally started writing some plugin development docs for maubot. It doesn't cover everything yet, but you can find it at https://docs.mau.fi/maubot/dev/getting-started.html. Setup docs were also moved from the GitHub wiki to docs.mau.fi and some of those docs have been improved (e.g. it now has instructions for enabling e2ee)

I released Guile-Deck 0.2.0, a GNU Guile SDK for the Matrix network: https://github.com/artyom-poptsov/guile-deck/releases/tag/v0.2.0

forward bot between matrix and tencent qq. Talk to us on #kazv:tusooa.xyz .

In the past 2 week we ("tusooa and her longcat," we hope someday we can

Thanks to Aaron Raimist (Aaron), matrix-docker-ansible-deploy can now install and configure the Mjolnir moderation tool (bot).

Additional details are available in our Setting up Mjolnir documentation.

For german speakers: my matrix talk from the Chemnitzer Linux Days is now online.

If anyone understands German and listens to podcasts, Krille Fear and I will be on the LinuxLounge on the 25th of April: https://social.tchncs.de/@theradiocc/106025736391026211

In fact there are dozens of people who understand German, and surely some subset of these listen to podcasts. With these conditions accepted, the LinuxLounge appearance will go ahead.

Matrix Live 🎙
Google Summer of Code - GSoC -- Final Call: put your seatbelts on!
Dept of Spec 📜
Dept of Servers 🏢
Homeserver Deployment 📥️
Dept of Bridges 🌉
Dept of Clients 📱
Dept of SDKs and Frameworks 🧰
Dept of Ops 🛠
Dept of Events and Talks 🗣️
Dept of Interesting Projects 🛰️
Matrix in the News 📰
Dept of Ping 🏓
That's all I know 🏁