This week we hosted Open Tech Will Save Us #12!

In terms of Spec Core Team MSC focus for this week, we talked a little bit about MSC2970 (path requirements for push gateways) and left some thoughts on the MSC. We also merged a few spec clarification/fixup PRs as they trickle in following the spec unfreeze last week. 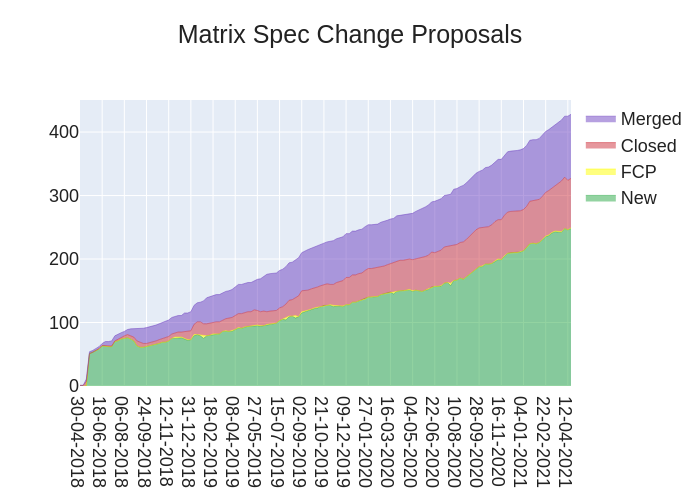 A lot of progress is happening currently! Federation is becoming more and more stable and missing features are being implemented:

In addition to Homeservers, the Matrix spec also describes Push Gateways and Identity Services, which augment our ability to send notifications or discover users via identifiers like email addresses.

On the Matrix.org Foundation side, we maintain production-grade reference implementations of these services:

We recently became aware of a few security and denial of service concerns in Sydent. Yesterday, we released Sydent 2.3.0 with fixes for those issues. It's extremely uncommon to self-host Sydent, but we wanted to highlight our work there all the same.

We've also finally settled on quarterly objectives for the Synapse team at Element, and the first thing we're focusing on is gaining a better understanding of how Synapse uses memory. Specifically, we'd like to drive down the peak RAM associated with joining large, complex rooms like Matrix HQ. We've already landed a small speed up to that effect, but expect more specific metrics in the future.

Synapse 1.32 is due out early next week, and we look forward to seeing you then.

If you had a problem durng the upgrade to 1.28.0, there is a fix here to restore the backup : https://github.com/YunoHost-Apps/synapse_ynh/issues/246 Element Web integration had been updated to 1.7.24 (1.7.25 available in branch testing)

So much bridge news this week!

Next week on Wednesday (2021-04-21), the old Gitter bridge (identified as @gitterbot:matrix.org) will be shut down and any plumbed rooms (bridged connections) remaining will no longer bridge. To replace this, we've already migrated all of the portal rooms and many of the plumbed rooms in preparation so most users will not need to take any further actions. The remaining rooms with the old Gitter bridge are unfortunately not possible to migrate and for those communities a clean break will be needed. The new native Gitter bridge is here to replace this!

You can read most of the same information and details if you still need to plumb for your existing room in the blog post, https://matrix.org/blog/2021/04/15/old-gitter-bridge-end-of-life-2021-04-21-to-be-replaced-with-native-bridge

Hey hey folks, something I can finally talk about in the open is that Element now has a Teams bridge! After months of being isolated on a desert island being fed nothing but rice crackers and diet pepsi, I can talk about our newest bridge. It's fairly feature packed with support for all the usual formatting options, plus Jitsi widget bridging (as links) and full puppeting including DMs. Matthew even went and nattered to The Register about it. So you heard it here first, no network is truly safe from the open federation and we hope to welcome teams users into the Matrix. The bridge is currently a closed source offering under the EMS banner for now.

You can read about it in https://element.io/blog/ems-launches-bridging-for-microsoft-teams/

Heise wrote an article about the Teams bridge: https://www.heise.de/news/Fuer-MS-Teams-Verweigerer-Element-startet-neuen-Bridging-Dienst-6017946.html

Incidentally, would you like to work on lots of bridges and make things happen? Please reach out!

Also, some more news. I've started making improvements to matrix-github as it continues to serve as the primary way for me to get notifications from GitHub. The latest improvements are that you can now dynamically create and assign filters to notifications coming to the bridge. This means you can name filters and turn them on and off as required (i.e. don't bug me about matrix-org on weekends please). The v0.1.0 release is out.

Have questions/ideas/mad-experiments, come chat to us in Matrix Github Bridge.

I've been using this for months now, and can confirm it works great!

It's a simple puppetting bridge to the public telephone network via providers like Twilio. It's designed to be modular and support several different providers (though it only supports Twilio ATM). Once more providers are added, it will be possible to seamlessly migrate your phone number between multiple providers and save conversation history. Chats are created by starting a DM with the control bot (currently hardcoded at @_pstn_:myserver.org) and running the dial command. Multiple users can join a room with the control bot and are all given access to puppet the bridge.

Some planned features could include: (I'm not committing to any of these ;D)

It's not ready for production use, though. It's still stuck on a SQLite DB and has a few usability issues.

Check it out on GitHub and join #matrix-pstn-bridge:kb1rd.net. 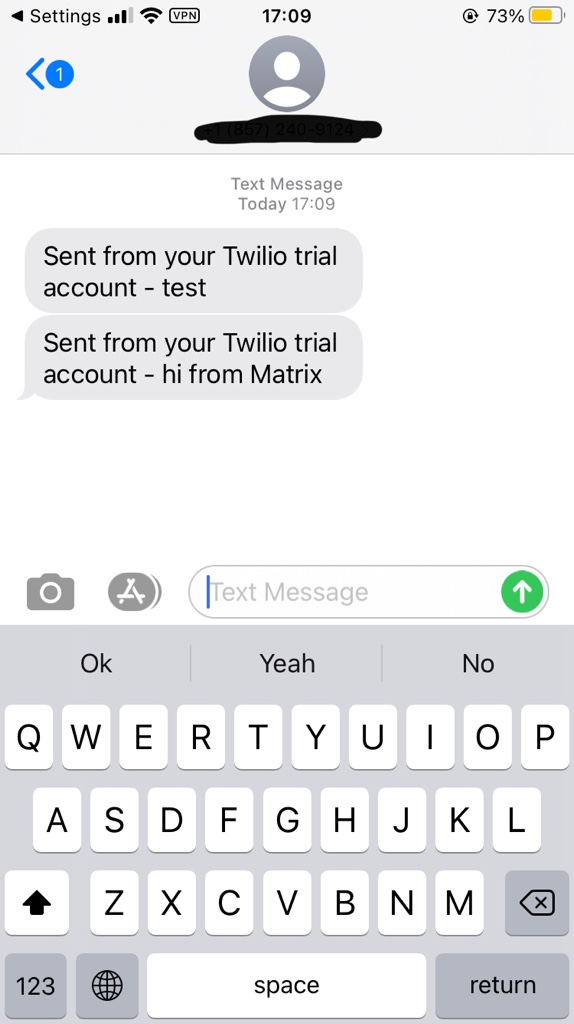 It's been almost two months since we shared an update 😱

Lots of things have happened in that time:

In addition to all the PRs, we are taking part in GSoC this year again! Proposals have been written, reviewed, updated, finalized, submitted and now there's some quiet time until the student projects are announced on May 17th.

I wrote a new tool for fediverse: search Peertube via Matrix. It uses Sepia Search API to search on all participating public Peertube instances. You can also select any single instance. It's implemented as a module for Hemppa the bot - see docs here: https://github.com/vranki/hemppa#peertube-search #peertube #matrix