University of Innsbruck featured in heise.de

The German IT platform Heise has conducted an interview with the university of Innsbruck which chose Matrix/Element over Microsoft Teams. Reasons: it's free, decentralized/federated, expandable and secure.

"free, decentralized/federated, expandable and secure" sounds like a great set of reasons!

Heise article, naturally, is in German. Element have some content in English discussing the deployment, and how well-suited Matrix is for universities. Finally, the best kind of feedback: an Innsbruck professor cheers the utility of federation:

And the best thing: The federation across different institutions really works. I can still participate in project related chats with my former team @ETH_en while seamlessly supporting lectures at @uniinnsbruck. All out of one tool, one login. pic.twitter.com/6LXHcu7Jjf

Btw if anyone wanted to hear Krille and me live, we are live at the linux lounge now. It's in GERMAN! https://theradio.cc/blog/category/shownotes/linuxlounge/

Exciting! Possibly. For the lucky few who can understand it anyway!

If anyone did miss the opportunity to listen to the live stream: Here you can find the recording, with show notes, as well: https://rec.theradio.cc/item/ll244/
We were happy to have Krille and Nico with us. 🥳
(website in german as well as the stream recording)

We've opened up a new room for MSC authors to come and ask about the MSC process, as well as for review and feedback on their MSC ideas over at #sct-office:matrix.org. If you're unsure what the next steps for your MSC are, or aren't sure whether an idea would make sense for inclusion in the Matrix Specification, then this room is the perfect place to ask about it. Come on by!

In terms of MSC work, Spaces remains one of the most active topics in the spec this week, with MSC1772 finally reaching Final Comment Period! A lot of work went into writing and reviewing the MSC, as well as crafting the implementation - so congratulations to everyone involved! Of course, any concerns can still be raised over the next 5 days by anyone before the proposal is ultimately merged to the spec.

There are a number of changes being merged to the spec as we move swiftly towards the next major Spec release. Those that have merged this week are:

Otherwise there's been a smattering of discussion and updates on various MSCs, such as MSC2730 (verifiable forwarded events), MSC2249 (requiring a user to be able to see an event to report it) and MSC2516 (voice messages).

Also - knocking is now published to the unstable spec, check it out at: https://spec.matrix.org/unstable/client-server-api/#knocking-on-rooms 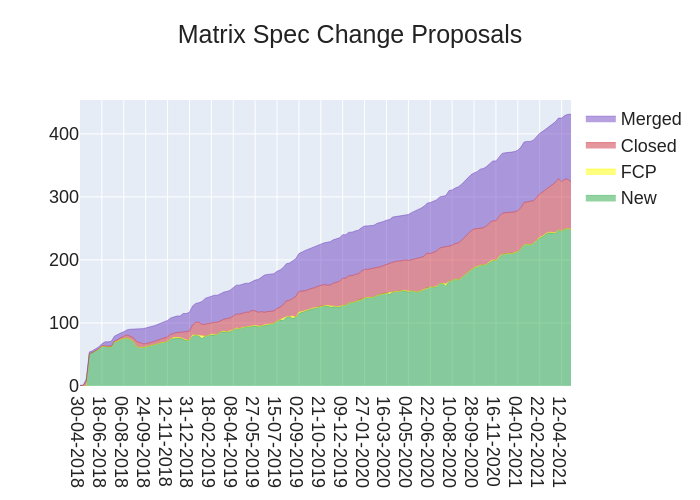 The demo will attempt to connect to other devices using Bluetooth Low Energy, even if internet connectivity isn't available. Local connectivity over Wi-Fi is also supported. It's still very rough around the edges and there are lots of bugs, but feel free to give it a go!

Join #p2p:matrix.org for more chat and to provide feedback!

We managed to work on a few features the last two weeks, but there are some very annoying issues with major Matrix clients:

We expect to release 1.33 on Tuesday; more on that next week. But generally speaking, much of our development focus has been on profiling the memory usage of small homeservers joining large, highly-federated rooms for the first time. For example, we see a graph like this when joining Matrix HQ:

At a first pass, we're aiming to significantly reduce the initial spikiness of that graph, and we think #9910 will help with the subsequent slow ramp up in memory.

We've also been discussing how to balance our relatively rapid release cadence with managing low severity security issues. If you have any thoughts, preferences, or relevant experiences to share, please comment here!

Announcing a new bouncer style Matrix IRC bridge to bridge the gap between IRC and Matrix in a way that's easy to configure and manage by homeserver administrators for small scale deployment.

It's written in Python and started off as an experiment if it's possible to create a somewhat well performing stateless IRC bridge that's practically almost zero configuration. It quickly found a use case of being able to join !channels on IRCnet that hasn't been possible in the past.

Intended target audience are people who run their own homeserver and would like to transition from a combination like ssh+irssi to pure Matrix (with weechat-matrix, of course!) but still keep IRC close without losing the "fine details" of the protocol that happens when plumbing a room properly.

As the bridge is written by someone who doesn't really know Python help is much appreciated in the form of filing issues, sending pull requests or just discussing about it on Matrix to tell how you would like to use it!

Development and support in #heisenbridge:vi.fi

Hey there, it is your friendly neighborhood cat client! Pardon, chat client!

Jedi18 implemented forwarding of messages. Just select a message and press Alt-F or use the context menu to send a message to the room you select in the popup! This encrypts and decrypts messages and media appropriately, but be aware that sending an encrypted file to an unencrypted room uploads the file unencrypted. (In all other cases the media is not uploaded again.)

Furthermore matrix.to links are now rewritten to matrix:-URIs internally. This means joining rooms and such should now work the same across both of them. It also makes navigation to events work now and even has a shiny highlight effect now! You can also create links to events now from the context menu. These are generated as matrix.to links, since currently the onboarding experience should still be better. Once the next version of the matrix.to website gets deployed, you can even just click there to open the event in Nheko! (Instead of having to copy a /join command).

Since "Copy link to event" was confusing to people and AppAraat opened his present box, only to realize it did not contain "Copy link location", we implemented that too as well as a copy action, to copy the event body for good measure. I hope everyone who got confused will forgive me!

Apart from that we also updated our screenshots on https://nheko-reborn.github.io/ (and all AppStream based store pages) to be higher resolution and reflect the current design. Furthermore we fixed the login on conduit homeservers and that no rooms were shown, if the server didn't support the groups API.

We rewrote the room managing code moving it from QML to C++ and unify how we manage rooms in NeoChat. This allowed us to support the matrix-URIs scheme, making it possible to open rooms and show user information when clicking on a matrix: link in your browser. Sverin Saji improved the look of the typing indicator and Jan Blackquill improved the keyboard navigation. 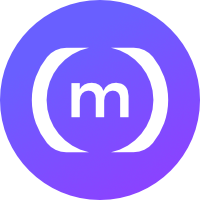 This week I published the first public build on TestFlight:

There are a few reports of issues when signing in which I'm looking into. A few other changes include:

As requested by benpa after my last update, here's a video of it running on a device:

If you spend any amount of time with Bruno, eventually the topic of sourdough will arise - now it's even sneaking into his updates!

I announced this project last week. It's exactly what it sounds like: A puppetting bridge to puppet a telephone number from Matrix. It's currently pre-alpha and not ready for use on public-facing HSes.

Not too much has happened in the last week as I've been a bit busy. The main thing is that there's now a dev branch where outbound voice calls work. Other than the 2014 SIP experiment, I think this is the first bridge to make voice calls work?

I hope having a reference VoIP bridge can help pave the way for more VoIP bridging. I'm already looking into how code can be generalized for other bridges. For example, I've opened an issue in matrix-bot-sdk to add helper classes and stuff for VoIP support. I'd be curious to see how other bridge builders think this could be accomplished. 👀

If you're interested in PSTN bridging specifically, there's a room for that.

If you're interested in VoIP bridging in general, there's a room for that, too

etke.cc - like Element Matrix Services, but on your servers, under your control and without restrictions

Some context: I like how simple EMS allows you to setup the Matrix homeserver, but it lacks any internal tuning or customization ability. Do you want more? OK, setup it yourself and try to stay normal while trying to configure coturn to properly run in docker cluster. Because of that, I did a service where you can order initial setup and configuration of homeserver (yes, with coturn in docker cluster!) and with full control of customization and fine-tuning of manual configuration (website even has step-by-step guide how the process works).

Source: https://gitlab.com/rakshazi/matrix-ansible/ It contains basic security stuff like ufw and fail2ban, system maintenance like updating packages, cleanup of old logs and docker images, configuration of swap, some additions like absurdly simply healthcheck page and website deployment to base domain. Documentation may be found in readme files for each role

The FLOSS Matrix hosting system built on AWX, it enables you to manage multiple Matrix servers for many clients in both a commercial or non-commercial context. We are currently doing a free giveaway of on-premises server plans, if you're an experienced user or Matrix admin you can receive a free on-premises subscription and hopefully provide us with some feedback.

For more updates on this project visit our Matrix room: #general:gomatrixhosting.com

GoMatrixHosting was previously Oasis Hosting - looks like they're making great progress improving their product, may be time to have another look.

Some of you might already have seen that bot show up in rooms. To clear up some confusion around it I will briefly explain what it does and what it is supposed to do:

What does it do?

The Bot is simply existing to do the same task as Matrix Traveler (bot) already did for years now. It joins rooms, listens for an alias, tries to join it.

The main difference between these 2 bots is that my bot also searches for aliases in old messages.

What does it save?

It only saves the relations between rooms. This means it knows which room was posted where. It doesn't know who posted it, when it was posted, why it was posted or any other content of messages.

However due to matrix' nature it does need to get the data once onto a synapse to read trough it. This means it has the data on my synapse. (Running in helsinki at hetzner).

What can I do if I do not want it?

The easiest way is to just ban it. It will fully forget that room.

Kicking works too but it might again join if it gets found again.

Where is the source?

The source code is available at https://git.nordgedanken.dev/MTRNord/server_stats/-/blob/main/src/bot/mod.rs

Also note this bot is still very early in development which is why it does not respond to you yet on any commands. This will be added in the near future as well as a readme in the repository