It for now is only a graph of room relations but in the future is supposed to be extended for a server based graph as well as a Table to search your room within.

Be aware that the page is best viewed and used on desktop. Clicking a Room Node will open a new tab with the matrix.to link. If this fails this might be because of no canonical alias being available.

For the developers the data can be taken from https://serverstats.nordgedanken.dev/relations The format currently is only available in the d3js format but in the future that API also will be extended for different usecases.

For any feedback like accessibility issues or other issues please reach out to me either via DM or in #server_stats:nordgedanken.dev 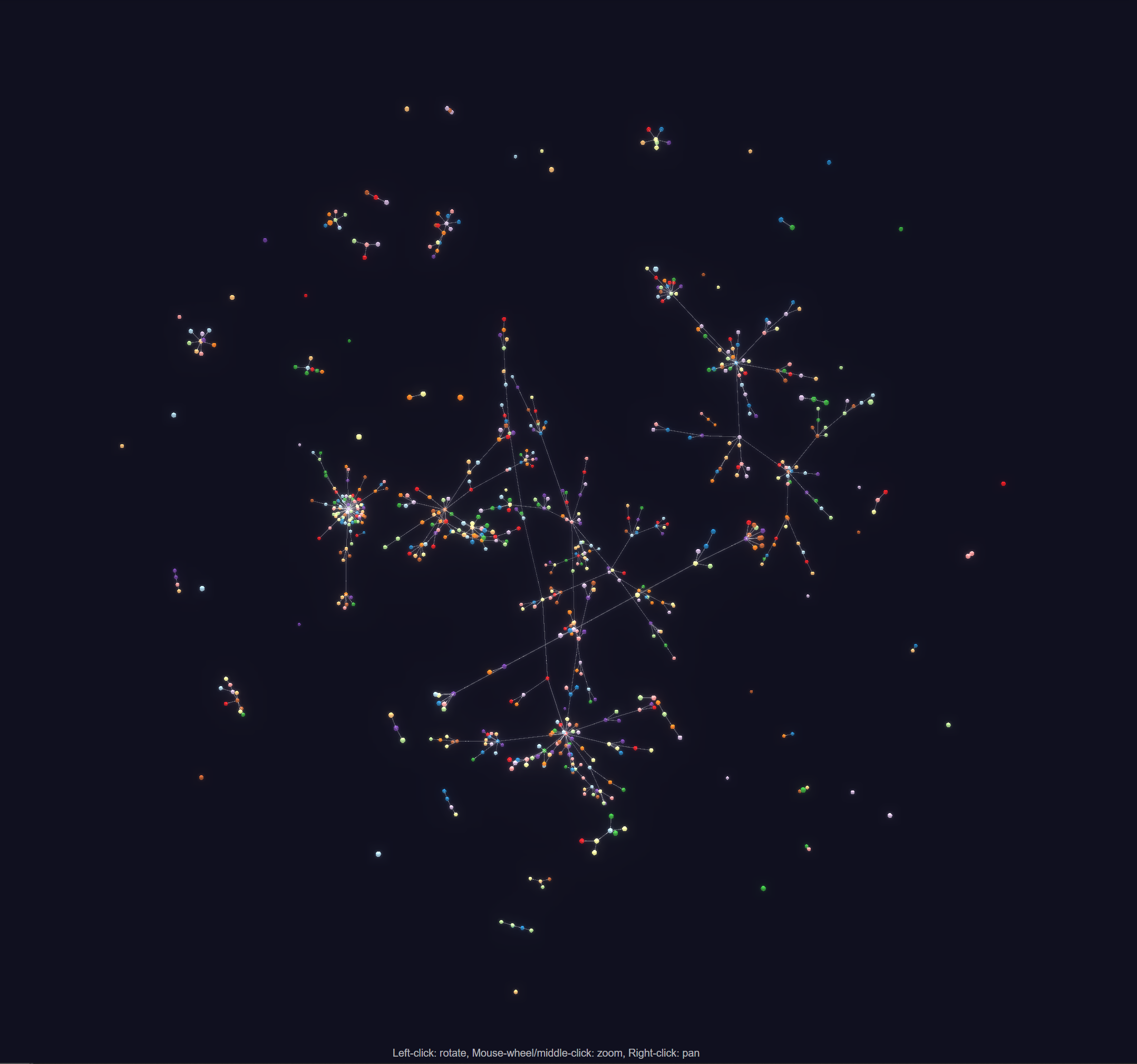 Here are all the actual MSC-related changes to the raw Matrix spec that landed this week!

A reminder that #sct-office:matrix.org is available to communicate directly with the Spec Core Team. A clarification from the last edition of TWIM is that this room is intended to be a low-traffic room solely for asking about the status of a/your MSC, rather than the Spec process or anything else. There is however #matrix-spec-process:matrix.org for discussion of the Spec process, and #matrix-spec:matrix.org for discussion of the Matrix spec and MSCs in general.

Otherwise the Spec Core Team has been doing a little bit of house-keeping. For those that have been living under a rock, Spaces is an upcoming feature intended to replace the old Groups/Community stuff with a much-improved implementation. And one that will actually make it into the spec! We've closed all old groups-related MSCs as they are now obsolete.

Additionally we've been giving some feedback on MSC2946 (Spaces Summary) which is another part of the Spaces puzzle (and is still a blocker for the release of the feature), as well as MSC3079 (Low Bandwidth CS API) which allows Matrix to operate on resource constrained devices and networks. Yours truly has also been making some PRs (one, two) to help clarify the Spec process. 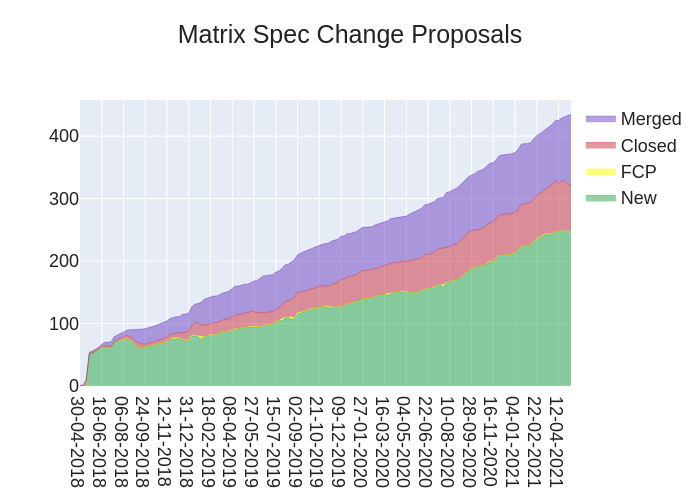 Yesterday we announced the source code release of Pinecone, our new peer-to-peer overlay network, which we are developing under the P2P Matrix banner.

If you missed it, we wrote a blog post that explains some of the juicy details. The source code is available on GitHub.

Join us in #p2p:matrix.org for the latest P2P developments!

It's a release! Synapse 1.33 is out, and we plan to release a security patch for it on Tuesday, May 11th. This follows our previous discussion where we committed to trying to decouple routine security updates from our regular feature releases.

Read the release notes for details, but the big news is that we finally have experimental support for moving presence off of the main process. We're still testing it, but we hope it will allow instances that need presence to more easily scale out.

In last week's TWiM we shared a graph of Synapse's memory use when joining Matrix HQ for the first time. In particular, we saw a spike to 1.4 GB before settling at 800 MB.

In the week since producing that graph, we've managed to nearly eliminate the spike, halving it to 760 MB. After backfilling history, the room settles at around 650 MB:

These changes are still a work in progress, but we hope to get them merged into Synapse in time for the 1.35 release on June 1st.

Additionally, Nico (@deepbluev7:neko.dev) has a request:

I wrote a patch for synapse, that reduces the size of almost empty incremental syncs by 50% (30% if you include http headers). If you are a client developer, you may want to test your client against a synapse with that patch applied, since it broke quite a few clients, that relied on synapse sending empty fields. While synapse sends empty fields, other server implementations, like conduit, don't, so fixing any issues here will help with portability across different server implementations too. With a bit of hope this patch can actually be applied in a few weeks to the official synapse, but it was backed out from the next RC because of the breakage. So if you can, please test your client, which you are developing, against the following PR and fix any issues you experience from it: https://github.com/matrix-org/synapse/pull/9919

The regular updates for my Helm charts (and still deprecated Synapse image) have been pushed, for Synapse 1.33.0/1 and the Matrix Media Repo 1.2.8. (technically last week, but it was after friday, so I'm throwing it in again)

The initial alpha version of Brooklyn is now public, which means you can now (try to) use mautrix-imessage on a jailbroken iOS device for iMessage bridging. Setup instructions are on docs.mau.fi: https://docs.mau.fi/bridges/go/imessage/ios/setup.html

Brooklyn was developed by ethanrdoesmc. It's an app/tweak that handles communicating with iMessage and runs mautrix-imessage as a subprocess for the Matrix side. The initial alpha supports basic text and media message bridging. Sending and receiving tapbacks, replies, read receipts and typing notifications will also be supported in the future.

Heisenbridge the bouncer style Matrix IRC bridge has seen numerous updates in the past week:

Minor fixes to ghosting issues and some other stuff. This will be the last big update for a while as it has mostly stabilized enough for daily use.

More testers are still welcome to get the remaining issues ironed out so if you need to connect to unbridged and unplumbed networks and run your own homeserver it would be an excellent time to try it out.

Experimental support for call bridging has landed. Now you can call phone numbers right from Matrix, with partial support for MSC2746. A few things to keep in mind:

Just a reminder, the GH repo is here and the Matrix room is #matrix-pstn-bridge:kb1rd.net . There's also a general VoIP bridging room at #matrix-voip-bridging:kb1rd.net.

matrix-appservice-irc has a new release candidate

The IRC bridge matrix-appservice-irc has a new release candidate. The upcoming version 0.26.0 will include many features and bug fixes. Here are three highlights:

Please test it and flag any issues you have upgrading:

In this release we have mostly focused on bugfixing and stability. We have switched to the new Flutter 2 framework and have done a lot of refactoring under the hood. The annoying freezing bug should now be fixed. Voice messages now have a new backend which should improve the sound quality and stability. There is now a more professional UI for editing aliases of a room. Users can now see a list of all aliases, add new aliases, delete them and mark one alias as the canonical (or main) alias. Some minor design changes and design fixes should improve the overall UX of the app exspecially on tablets.

Version 0.30.0 will be the first version with arm64 support. You can download binaries from the CI and we will try to publish it on Flathub. Together with the new Linux Desktop Notifications feature, this might be interesting for the Librem 5 or the PinePhone. Sadly I don't own one of these very interesting devices. If you have one, I would very like to see some screenshots of it! :-)

If you want to try the binary from CI, keep in mind that GDK_GL=gles needs to be set to force it to use the OpenGL ES. Flatpak build on Flathub already has it set up and works out of the box.

Some distributions can have issues with input fields and virtual keyboard, making it look like the input is set up as right-to-left. To my understanding, it's an issue of certain older GTK versions with Flutter. 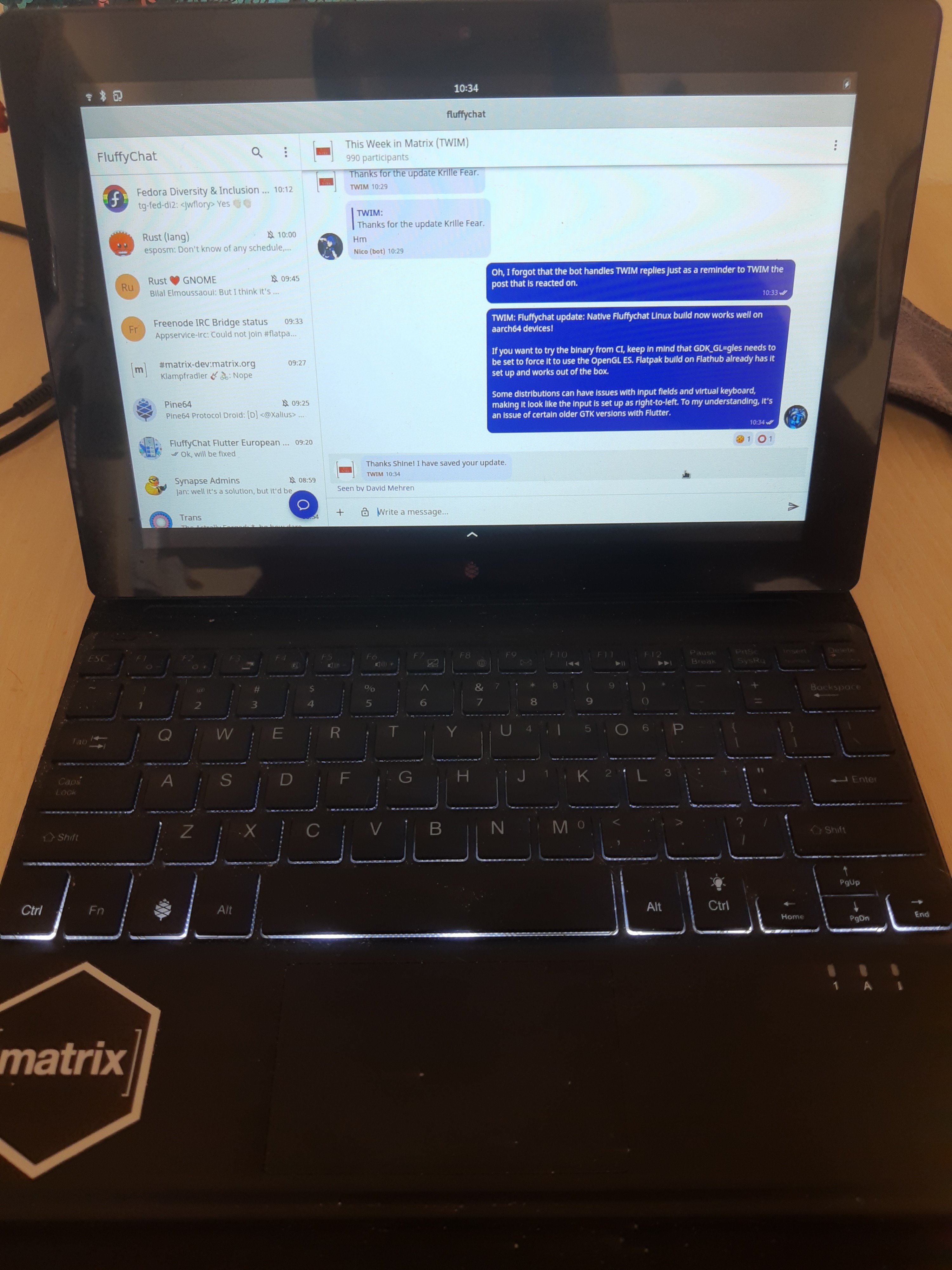 Nheko now should stop showing you actions, that you can't do anyway, because that is confusing and useless. This includes the following and more:

Tell us, if we missed something or we removed an action, that you actually have permissions to do!

Apart from that we also started working on some of the features for the next major release. That release will mostly focus on bringing End-to-End-Encryption out of beta. As a first step, Nheko now shows if a message was sent from a verified device or not. This has 3 different trust levels:

These are some biggish changes, so if you experience issues, tell us in #nheko:nheko.im!

Hot on the heels of our previous announcement and building on the fresh foundations of our rewrite, Julian got busy on room history. It now appears when a room is selected in the sidebar! To make that selection easier, room filtering in the sidebar has been implemented by new contributor Veli Tasali. Once a room is selected and displayed, messages can even be sent to them! Sounds like we’re done and the client is ready… SHIP IT! Not really though, as it’s still very basic, but at least the bare minimum to make it actually usable is now here.

As a nice bonus, we do lazy loading, and rooms are now added to the sidebar in batch on startup to ensure good performances. The sidebar also got some refinements from Kévin (!732 and !736).

Finally Veli also helped us get the docs for fractal-next published, lowering the barrier to entry for other new contributors. They are available at https://gnome.pages.gitlab.gnome.org/fractal/fractal/.

For further details, Julian published a technical overview of the internals of the new codebase.

Updates provided by the teams

Very excited about the Spaces progress! Looks like everything that I found in recent testing is fixed!

Trixnity finally got released this week. It's a Kotlin multiplatform Matrix SDK for high level access to Client-Server API and Appservice API. It has all (and some more) features from matrix-spring-boot-sdk which is based on Trixnity now (an update for that will be released soon). Trixnity can currently be used on JVM and JS as platform (Native is not working yet). It is also very customizable by adding custom room and state event types.

It also brings the option to use HTML data attributes for configuration.

I did a video a few months back trying to show the physical layout of Matrix over the years by looking at the phonehome stats and the number of active users per server (showing full-mesh edges between the top 100 servers, heatmapped by how busy the servers were at either end of the edge). There was a bug in the phonehome stats during 2017, but it's still fairly cool...