This week Dan talks to Erik about the state of Synapse generally, and in particular the work Erik has been doing for performance.

Some combination of me, Kegan, Bruno and neilalexander have been working on v3 of the CS /sync API. (Today's /sync API in matrix is v2; v1 was the old /events API). We're not yet at the point of publishing a draft or MSC, but it's coming soon. It's really exciting work which flips Matrix around so that sync scales independently of the number of rooms you're in - and it's at last possible to write rich clients which only ever sync the bare minimum data needed to work: i.e. lazy loading eeeeeeeeverything. Watch this space :)

Here are all the actual MSC-related changes made to the raw Matrix spec this week!

There's been activity from the Spec Core Team on a number of different MSCs, such as MSC3189 (per-room/space profile data). Additionally a spec PR for Matrix URI schemes has been getting feedback and is moving forward at a quick pace! There was also some feedback from the team on MSC2448 (blurhashes) which I'll get around to answering shortly 🙂.

Otherwise I think this week was a bit implementation-heavy for the team (the Spec Core Team is a task in addition to our full-time jobs). Hopefully next week will grant us more of a breather. 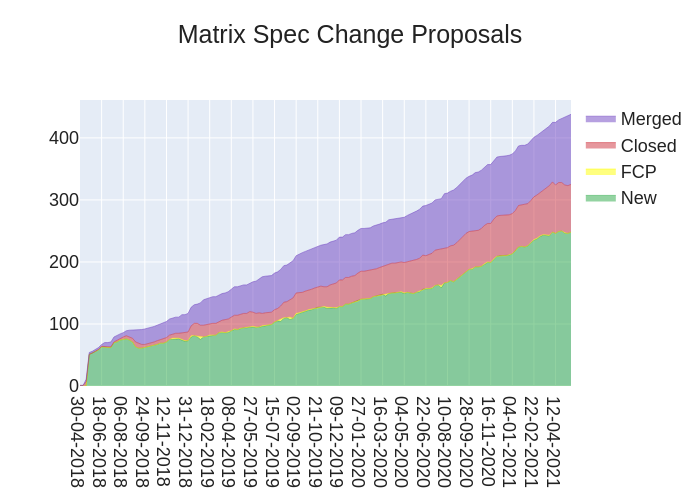 Hello TWiMmers! The bulk of our update is in Matrix Live today, so go check out the video above ☝️ to hear about how we're reducing the amount of memory it takes to join large rooms, and why joins take so much memory in the first place.

Otherwise, we're mainly getting ready for the public debut of Spaces as a beta feature, but more on that next week... 😉

Oh, and before we go: please make sure your Synapse is up to date! We released 1.33.2 on Tuesday, which contains a low severity security fix.

Another installation of the regularly scheduled Kubernetes Helm Chart updates (and another bump of the deprecated Synapse image). Now up to Synapse 1.33.2 and Element Web 1.7.27.

This week was spent on stability improvements & bug fixes.

Calling for testers! The bridge is at a point where it's mostly usable, but it still has quite a few blindspots. If anyone is willing to try it out & report issues, it would be a great help!

Shout-outs to @lecris:lecris.me for being an early tester & having given a lot of useful feedback 🙂

Last time, we updated you on starting DM conversations with Gitter users from Matrix. Now we have the other side of this complete! From Gitter, you can now start a one to one conversation with someone you see from Matrix 😀

Just hover over their avatar to bring up the user popover, then press the "Chat privately" button. 🗣

Goooooooood afternoon folks and happy Friday! This week we're announcing the 0.26.0 release of the matrix-appservice-irc bridge which contains precious goodies:

As always please come tell us about it in #irc:matrix.org and make sure to check out the new docs if you get a bit stuck.

Hydrogen can now leave rooms and forget archived rooms. URLs are now also clickable in the timeline. Get the full details in the release notes! 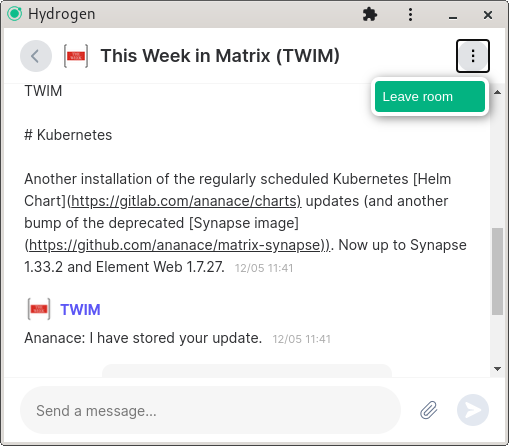 Visit #general:gomatrixhosting.com to join in the discussion.

GoMatrixHosting offer a great way to get your own homeserver without needing to run it yourself. Check them out!

Matrix was featured on fedoramagazine.org

From Dept of Humour in #twim:matrix.org 😅: