Travis rolled out MSC3202 to aid in the quest for end-to-bridge encryption without having to rely on /sync. Otherwise the Spec Core Team has been reviewing MSCs and focusing on the last remaining spec PRs needed before cutting a new spec release. Watch this space! 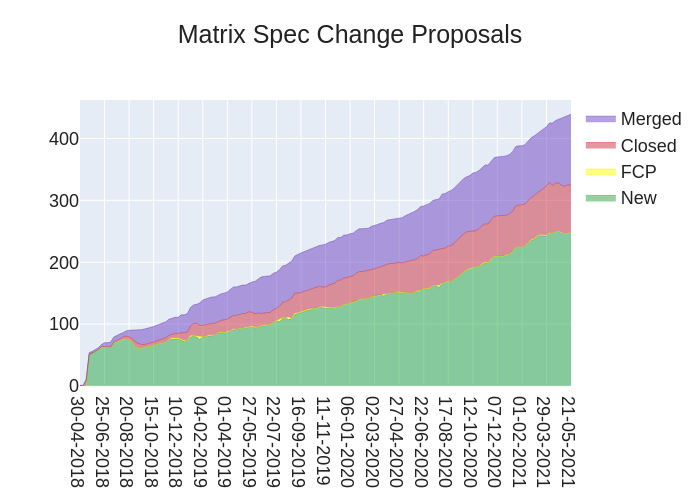 Awesome to be able to VISIBLY see the progress in that graph!

The big news this week was the launch of Spaces, supported by the release of Synapse 1.34.0.

However, there were quite a few other fixes, improvements, and additions: I'd encourage you to read the release announcement for those.

But more than anything, we're hard at work realizing the room-join memory improvements we talked about in last week's Matrix Live, and we expect to have some exciting news to share next week. Concretely: the pull request to support incremental parsing of join responses was merged, and several pull requests (#10017, #10018, #10035) to simplify and slim down the code for verifying event signatures are in review.

See you next week! 🚀

Here are some Conduit news!

And this week brings another instance of the regularly scheduled Kubernetes updates, with Element-web going to 1.7.28 and Synapse having been bumped to 1.34.0 on both the deprecated image and the chart.

Howdy folks! I'm sure many of you read the news about the new libera.chat IRC network starting up, and many of you also reached out (via pretty much every channel available) to ask about a potential bridge. libera.chat are doing a remarkably good job of getting spun up but are hyper busy with all the inbound users and need a bit more time, so in the meantime I would ask that everyone subscribe to https://github.com/matrix-org/matrix-appservice-irc/issues/1324 to listen for changes as they happen.

The matrix.org bridge team are on the case! Expect news in the near future :)

Submitted by the teams

As announced in the general Matrix GSoC post, we are lucky to get two interns this year again. Alejandro (whose previous work includes switching to matrix-rust-sdk for syncs) will implement multi-account support, while Kai (also a regular contributor by now) will help bring our application rewrite to the same functionality level as our current nightly and stable versions. Both projects will build on top of Fractal Next.

Julian came back from his vacation and immediately got quite busy reviewing and merging contributions from others. Kevin (also known as zecakeh) and him made good progress on several fronts:

Released 0.1.53 with support for linking to room this week, which should allow to add Hydrogen to matrix.to soon. Also started working on redactions, which is useful in itself and also lays the foundations for reactions and edits coming next.

Check out this flattering portrait of Nheko on the Brodie Robertson "Linux Tips & Tricks" channel.

We've been quiet in the past weeks, but certainly not due to lack of activity! So many awesome things have happened, I don't even know where to start. I guess I'll go chronologically:

We published so many new crate releases. Most of our crates didn't see non-alpha releases for almost a year and now we've finally reset that counter! Now you can depend on ruma 0.1 and get bug fixes and new functionality through cargo update without having to worry about breaking changes. Huge thanks to @zecakeh for automating our release process, without that this would have taken so much longer.

We got initial spaces support! I'm super excited that we're now enabling client authors to take spaces into account, even if "taking into account" will initially just mean filtering out space rooms from their room lists. Code-wise, this was actually a relatively small change, with ruma-client-api receiving support for room types and ruma-events receiving support for the event types m.space.child and m.space.parent.

We're swapping out ruma-signatures' crypto library. Since ring, which is what we've been using so far, doesn't currently support cross-compilation to WASM, there's long been some interest to exchange it for something else for webbrowser homeserver experiments. A viable alternative library was identified a while ago and now @ShadowJonathan has taken on the task of implementing the switch.

In addition to unblocking the WASM usecase, this work revealed a bug in ring, which generated invalid PKCS#8 documents. We are pretty confident that once the switch away from ring (including a small compatibility shim to convert the invalid documents), a certain class of signature verification failures that Conduit has been getting will be fixed.

We're taking part in GSoC again. As you might have seen in the earlier blog post, two students are working on Ruma as part of GSoC this year: @Frinksy (for the first time) and @DevinR528 (for the second time).

By default, we still install Element, as Hydrogen is still not fully-featured. Still, people who'd like to try Hydrogen out can now install it via the playbook.

Additional details are available in Setting up Hydrogen.

Thanks to Toni Spets (hifi), matrix-docker-ansible-deploy now supports bridging to IRC using yet another bridge (besides matrix-appservice-irc), called Heisenbridge.

To get started, see our Setting up Heisenbridge bouncer-style IRC bridging documentation.

etke.cc is "spantaleev/matrix-docker-ansible-deploy as a service" and we got some updates:

If you're trying out all those cool Spaces (Element Blog) and have some old Communities/Groups hanging around, I have the bot for you.

spacebot makes quick work of the conversion by translating as much as possible to the Space structure. Simply DM the bot and say !convert +group:example.org and it'll go off and make your Space.

The bot doesn't invite everyone from your Community to your Space, giving you a chance to configure the Space further before advertising it within your rooms.

The source can be found on GitHub if you feel like running your own or seeing how simple it is under the hood. #spacebot:t2bot.io is a great place to get help if you're having problems getting it going, and #help:t2bot.io would be glad to assist you if the t2bot.io deployment doesn't do the right thing.

P.S.: Spaces are currently considered Beta in Element, so they might not be perfect just yet. #spaces:riot.ovh is the room to join if you have questions about Spaces.

Hemppa the bot is a general purpose Matrix bot written in Python. This week it gained two useful admin tools: Kick by wildcard (for cleaning up zombies after bridge decomission) and making tombstones to point room to a new one. https://github.com/vranki/hemppa

A little bit different, but matrix related, this week I added Matrix push support to the raspberry-noaa-v2 project. This is a project which runs on a raspberry pi to automate receiving, decoding and post processing of images over radio from weather satellites. It's easy to build a cheap ground station for this with little more than a USB SDR dongle and a metal coat hanger. If you want to see the pictures I am decoding you can join #weather:cadair.com.

Cadair, living in the north of England, will only see this symbol unfortunately 🌧️

The Project now has a proper webpage at https://serverstats.nordgedanken.dev/ !

Planned features for the webpage

Be aware that this page is very new and therefor might have bugs. It also isn't yet mobile optimized.

For questions, suggestions or fast updates check the #server_stats:nordgedanken.dev Room or for questions regarding issues with the bot in a specific room feel free to write a DM to MTRNord :)

Due to a bug with my homeserver or synapse it happens for some rooms that synapse generates a lot of join events (Lots of "server_stats bot made no change" messages). If you see this please write a message to MTRNord so I can manually prevent my bot from trying to join the room over and over again as I cannot easily detect this kind of issue before joining.

The issue can be followed at https://github.com/matrix-org/synapse/issues/10021

This might be of interest for TWIM. It's a little web app that supports token-based registration in the Matrix UIAA. Sort of like matrix-registration, but aiming for compliance with the UIAA spec

Circles is a new project to build an E2E encrypted social network on top of Matrix. https://www.kombuchaprivacy.com/circles/ https://www.kickstarter.com/projects/cvwright/circles-a-secure-social-app-for-friends-and-family

It's really early days for this project, but please check it out!

The fedora project is discussing which domain to take in https://discussion.fedoraproject.org/t/so-what-domains-should-we-use-for-our-matrix-server/29842

Un-burying the lede: Fedora are making the jump to Matrix!