anoa gifted us with:

The Spec Core Team is working towards finalising the remaining spec PRs and the new spec release process. Good news is there's only one final spec PR to go! Bad news is it's probably going to be one of the hardest :)

Otherwise the team was pleased to see that noticeable progress is being made on the MSC backlog. But that doesn't mean we get to rest on our laurels! 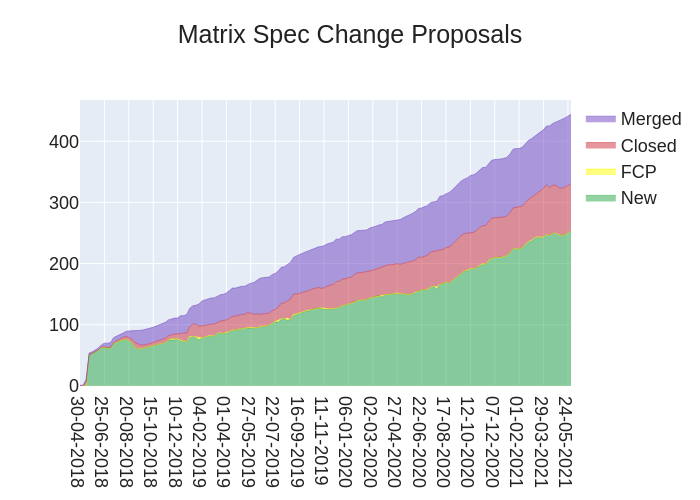 We have interns! In addition to Matrix.org's participation in Google Summer of Code, Element has funded two Outreachy interns to work on backend projects, and we're overjoyed to welcome the following folks to Matrix:

We're also working to unify and standardize the module API which is used to extend Synapse, and your feedback would be very welcome. Similarly, if you have any experience with adding custom modules to Docker images or Debian packages and have thoughts on how we should best support that (or just examples of projects which do that well), please weigh in at #9944.

Lastly, we're looking forward to the release of Synapse 1.35 which will bring significant improvements to memory use during room joins, but that's for next week. 😉

I've been working on a smart media worker/proxy, to offload initial spikes in traffic for homeservers behind slower network uplinks.

There's a <remote> component that sits on a small vps, handling the upload and download endpoints (and soon, thumbnails), with an in-memory cache to quickly respond to requests. Media still gets forwarded to the <local> component where it gets stored in Synapse's media folder with an accompanying database entry, so all media is still stored long-term in the way Synapse expects it to be, so the proxy can be removed at any point.

Currently not production ready but you're welcome to snoop around the repo :)

Seems like quite a useful project! Other adventures in splitting out the media server from the homeserver include TravisR's matrix-media-repo project.

Conduit is a Matrix homeserver written in Rust.

Timo also shared with us a milestone dashboard for Conduit being production-ready: https://gitlab.com/famedly/conduit/-/milestones/3. It's exciting to see the multi-implementation Matrix homeserver landscape really beginning to take shape!

Another weekly Kubernetes Chart update, this time only for element-web though - which was updated to 1.7.29.

Hey folks, some of you (well, frankly most of you) wanted to hear about our plans for libera.chat. I've been hard at work this week building a brand new bridge which is hosted on the libera.chat homeserver and it's nearly ready to go. We're just making a few final preparations before taking it out of beta, but it's currently available as a portaling bridge. You can currently reach any channel on libera.chat by joining #<channel_name>:libera.chat. You can also add the homeserver to your room directory in your Matrix client to search all the bridged rooms.

We're also hanging out in #libera-matrix:libera.chat, if you have any questions. Of course, the bridge is proving to be very popular so please be patient :)

Definitely one of the most sought-after Matrix bridges lately. Props to Half-Shot, Libera.Chat and everyone else for getting it all together in such short notice.

Somewhat experimental feature that has landed this week is the ability to use single puppeting in a public Matrix room to bridge IRC channels.

This support comes through a new PLUMB admin command for network rooms that will ask the bridge bot to join a public Matrix room and an IRC channel.

On IRC side there will be only a single user/bot that will relay messages from Matrix users. This is a stop-gap between fully puppeting Matrix users on IRC and doesn't need explicit permission from an IRC network to use by channel operators as long as bots are allowed.

On Matrix side puppets will join and leave based on their presence on the IRC channel. The bridge bot does not need any special permissions in a room as it doesn't do permission synchronization so it can be kept without any power levels.

Unplumbing a room is as simple as kicking the bridge out and it will take the puppets with it.

As this is a fairly new feature it does have some rough edges so feedback is greatly appreciated.

With all this said, if you're in the need to bridge any IRC channel on any network with little friction, Heisenbridge should have you covered!

If you're using Heisenbridge to connect to Libera.Chat from a network block that has SASL enforcement enabled (like some VPS providers) you can now configure SASL credentials to authenticate at connection time to bypass this restriction.

This only implements SASL PLAIN for now. Certificate authentication may be looked at in the future.

But that's not all

In addition Heisenbridge is now featured on matrix.org 🥳

matrix-puppeteer-line is a bridge for LINE Messenger based on running LINE's Chrome extension in Puppeteer.

This week brings a variety of assorted bugfixes & feature improvements in the testing branch. Included are:

The past few weeks have been busy with fixing bugs. As a result, we plan to release NeoChat 1.2 next week. You can help by testing the Flatpak beta version of NeoChat: flatpak install https://flathub.org/beta-repo/appstream/org.kde.neochat.flatpakref.

Aside from bug fixing, Tobias worked a bit on E2EE encryption in Quotient and Noah added a fancy typing indicator. 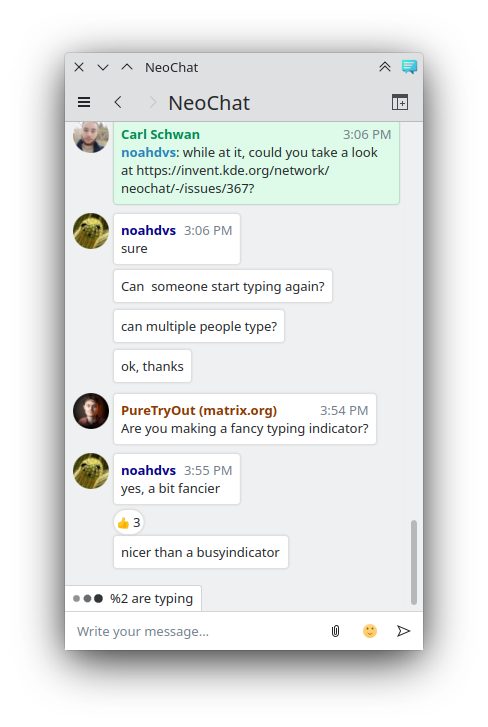 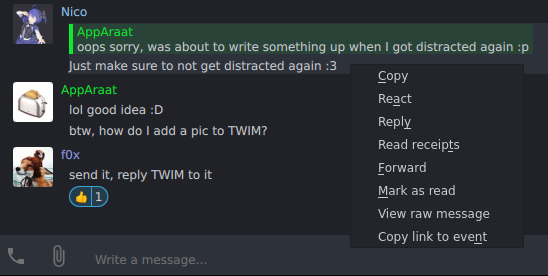 FluffyChat 0.31.1 has been released with a lot of bug fixes, stability improvements, minor redesigns and a lot of refactoring under the hood. 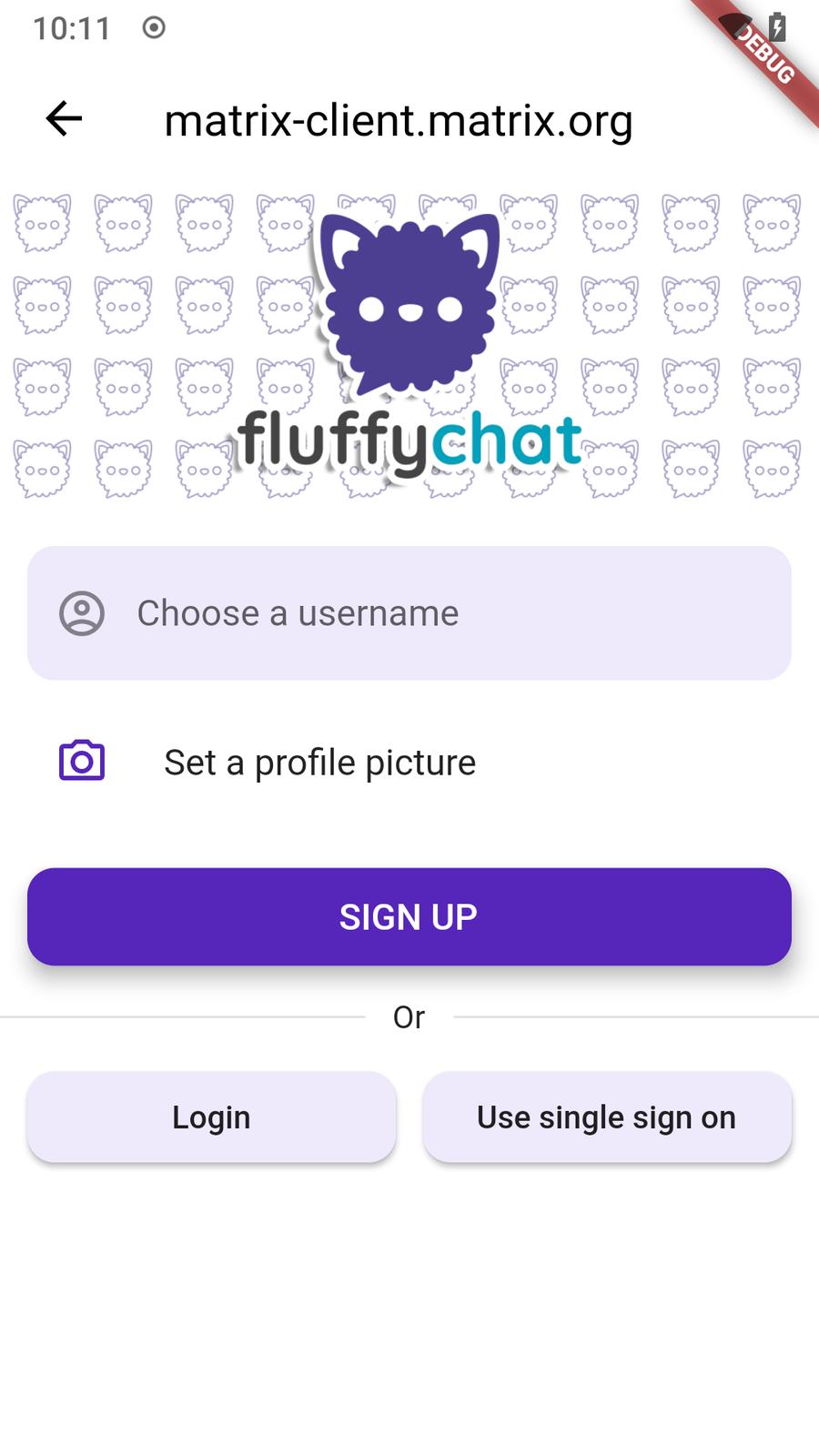 Fractal is a Matrix client written in Rust, and one of the first to use the matrix-rust-sdk!

Since last week, a couple things landed in fractal-next. Julian added support for accepting/rejecting invites (!754/#759). Kévin did an internal restructuring of how we handle the SyncResponse in !759. The visible consequence for users is that room categories (also known as tags) are updated directly in Fractal when the user changes it from an other client. He also switched from comrak to ruma’s markdown in !756. It shouldn’t have any impact for users, but should mean less code in the end on our side and more consistent code as well. 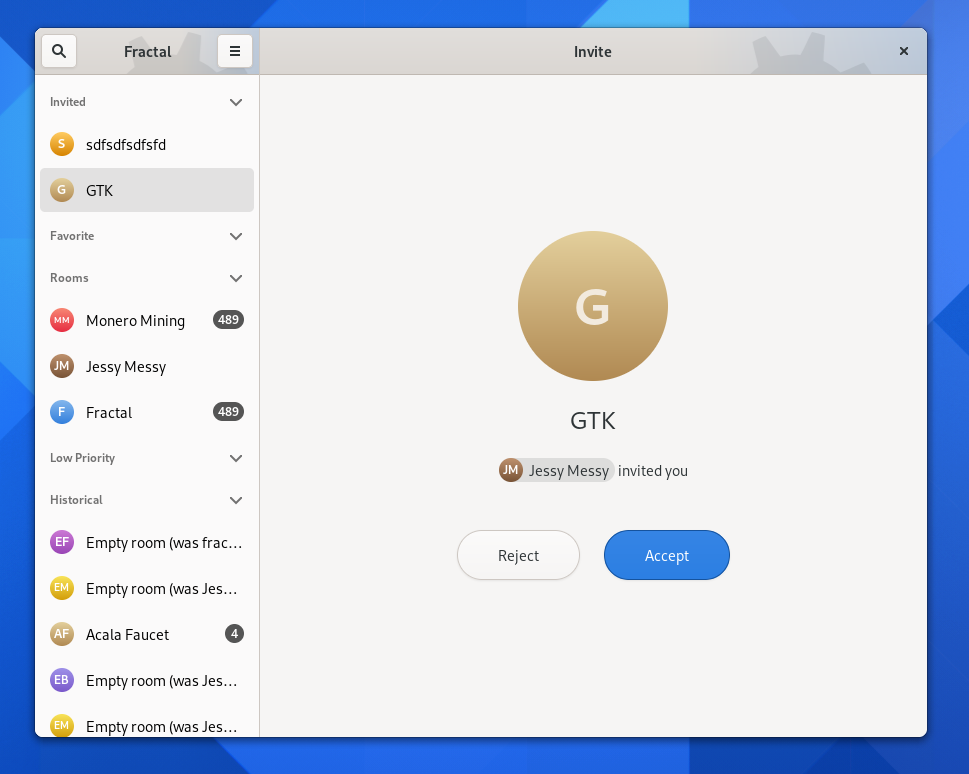 Crafted by the Element teams.

I forked autodiscover-client-configuration to implement the Server-Server counterpart of getting the API endpoint from a server_name.

We are finally open for business. Start your own Matrix service today with GoMatrixHosting!

And quite soon after:

Check us out on GitLab: https://gitlab.com/GoMatrixHosting/

Or come say hello at: #general:gomatrixhosting.com

Beeper is a Matrix client and service that makes it easy to connect all your digital communications in one place.

Been a while since our last update! The biggest development is that we've hired some fantastic members of the community including SpiritCroc from SchildiChat to work on Beeper Android and Kilian from Nio to work on Beeper iOS.

Projects in the works

We are hiring React, iOS, Android and SRE/Devops engineers. If you're interested, send me a DM! 100% remote, we'll hire you anywhere you are. 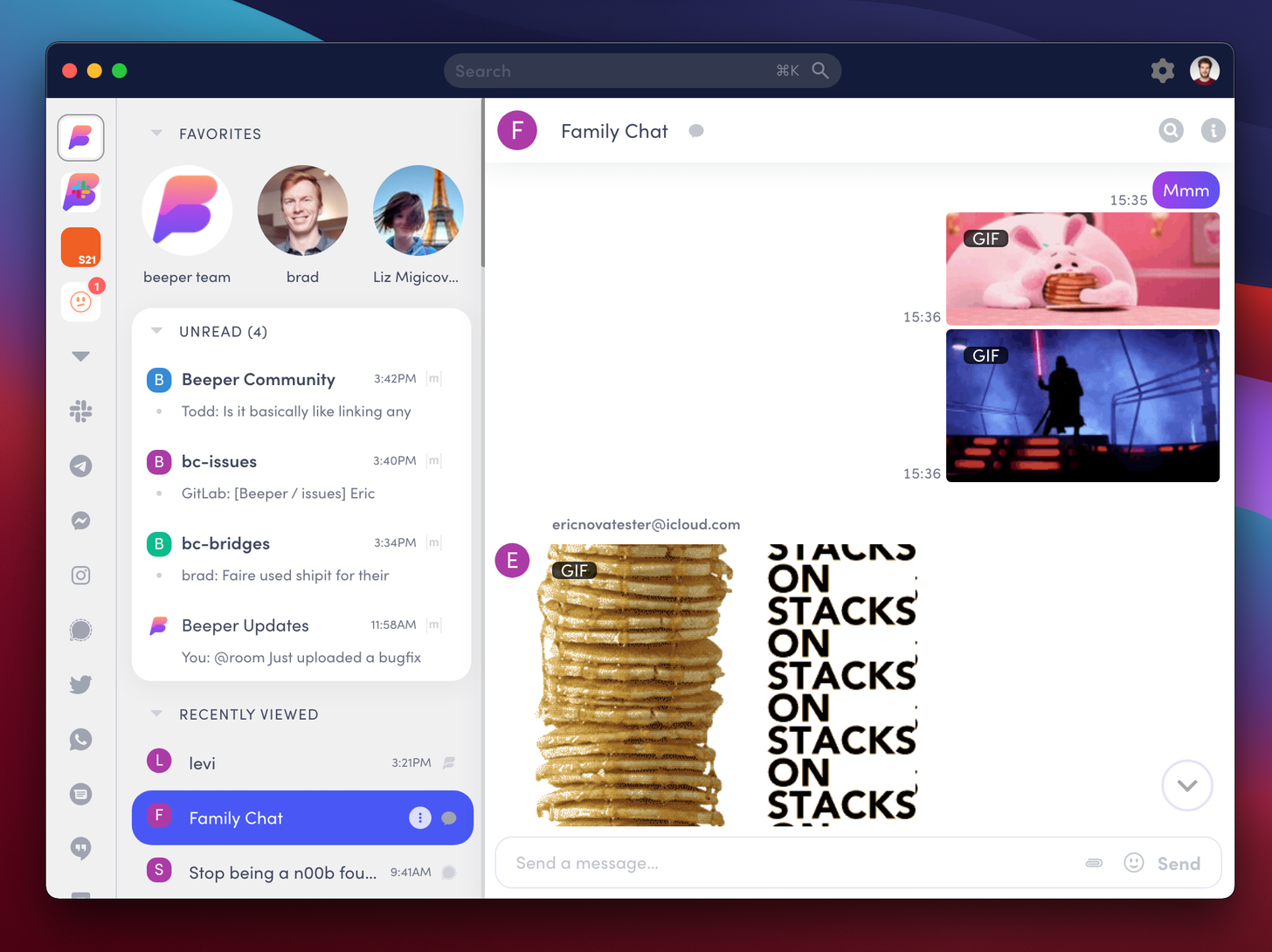 Eric's Matrix ID is @eric:beeper.com. Reach out if you're interested in getting involved!

If you want to use spaces to run an invite-only community, but can't wait for knocking and restricted room membership to make their way into a stable room version, you may be interested in Airlock, a very simple bot that I wrote to automatically invite people to a space's rooms and subspaces when they join.

It requires zero configuration—just invite the bot to your space and all of the rooms and subspaces within it, make sure it has invite permissions, and you're good to go! You're welcome to use my hosted version @airlock:townsendandsmith.ml, or run it yourself.

It's great to see people building useful tools to bridge the gap as Spaces inches closer out of beta.

Host your blog on Matrix

About a month ago I came up with the idea that it would be interesting to use Matrix as an API for a blog. Sometime later it turned out that it's possible, and one thing led to another, and now I have a blog hosted on Matrix 😃

Long story short, the blog is a space and each post is a room within that space. This allows you to read the posts in your Matrix client of choice and also have discussions right underneath the content.

You can read more details on how it's done on the blog itself (incl. links to ugly code on my Github): https://evolved.systems/hosting-a-blog-on-matrix/. If you want to chat about this, join #blog:evolved.systems !

Longtime readers may remember Luke Barnard's take on the concept of Blogs built on Matrix back in 2019 with Journal. It's really exciting to see a modern version of this concept - and using Spaces no less!

Server_Stats is a project to make statistics about the Matrix network neatly catalogued and browsable.

The tool now has a separate list for rooms that are spaces at https://serverstats.nordgedanken.dev/spaces this allows you to find Spaces easily and fast :)

Check out the Sourse at: https://github.com/MTRNord/server_stats or join the room at #server_stats:nordgedanken.dev for questions :)

Circles markets itself as a private, end-to-end encrypted social network built on top of Matrix.

The Circles beta is open source

It's AGPL for now

But automatically transitions to dual-license under AGPL / Apache 2.0 when 'Murica turns 250 years old. (July 4, 2026, for my international friends)

I love seeing Matrix projects dipping into the social networking sphere. It's an untapped market!