Wired UK have published a feature on Matrix in their print edition this month. We'll be sure to link to it when it's made available online! I just learned that in a poll of 89 universities in Germany, Matrix ranked third place in the chat category already.

The source is in only available in German, unfortunately: https://zenodo.org/record/4817795

However, the conclusion list (first table) may be understandable from context. It lists the top three solutions per category with their respective number of universities using it.

The evaluation was "which solution are you using".

The Instant Messaging part starts at slide 15, the first chart on that slide is "which solution do you use", the second is "How content are you with the solution?", with Matrix having the best average of all solutions, namely ~8.8/10.

What's also noteworthy: Those using matrix are the happiest with the solution

This week the Spec Core Team has been reviewing various Spaces MSCs, most recently MSC3230 (Space ordering). We're also hoping to square away the aggregations MSCs (message editing, reactions, etc) once and for all, though this will likely take a concerted effort from a few members to pull off.

Finally MSC3231 is a (currently draft status) MSC from Callum, one of Matrix.org's GSoC students this year! His project aims to allow native token-based registration to homeservers (the idea is so that you can generate a few tokens from your registration-disabled homeserver and hand them out to a few trusted friends and family members).

And finally, work still continues on finishing up the technical portions of the new release process for the spec. As mentioned last week, we've attempted to split the work up over multiple people in order to get it done quicker. Slowly but surely... 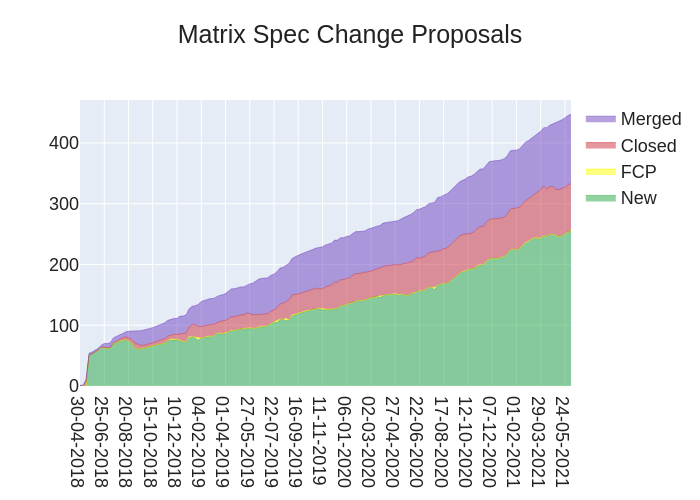 Hello from the Synapse team! A short update for a short workweek (thanks, bank holidays!):

Catch you next Friday! 👋 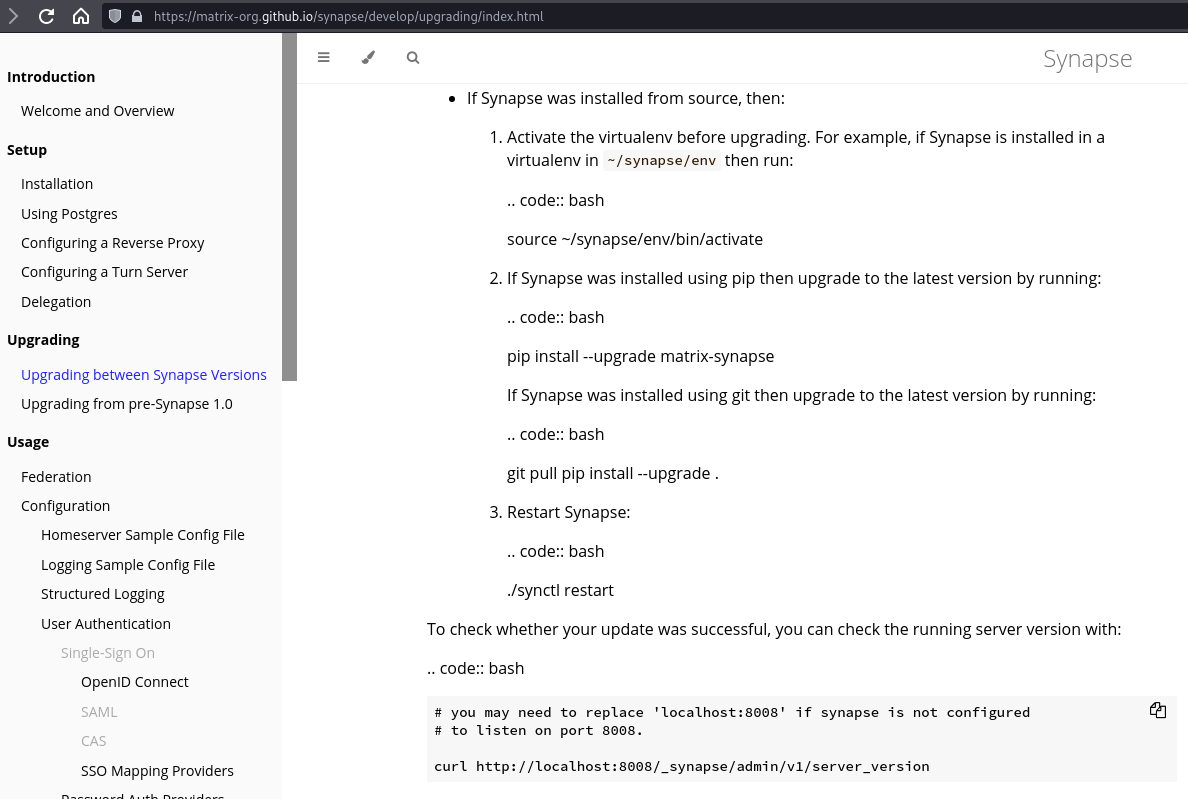 Another round of updates on my smart caching media proxy. After refactoring a lot (as always), I implemented thumbnailing! Now the only big feature left to add is url previewing. I also have a test deployment configured on media.pixie.town now, so you can try fetching a bit of remote media through there, or view this submissions screenshot

Got started implementing a Prometeus /metrics endpoint, with a rudimentary Grafana dashboard for my test installation.

While they both implement Matrix' media endpoints, they serve rather different niches, where matrix-media-repo fully decouples the media repo aspect, my proxy cooperates with Synapse's filesystem and database, to speed up operation while ultimately making it a seamless drop-in and removal process.

And another weekly installment of Kubernetes Helm Chart (and deprecated Docker image) updates, tracking the Synapse releases this week (1.35.0/1).

Half-Shot hit us late with a pair of updates:

Hello. This week we've released an update to the https://github.com/matrix-org/matrix-appservice-bridge/ library containing a security fix for room upgrade handling. The security report will come later, but for now we advise anyone using the room upgrade handler feature to upgrade to 2.6.1. By the same token, we would also advise all IRC bridge admins to update their bridge to 0.26.1.

The Libera.chat bridge is still ongoing

Howdy folks. As you've likely seen over the last few days, we're still hard at work getting the final pegs in place for the libera.chat bridge. As usual, you can start using the bridge now while it's in beta by going to #<foo>:libera.chat, but we're hoping to have the thing stable by next week. Catch us in #libera-matrix:libera.chat for the juicy gossip about it.

These changes (and ones before it) will be merged to master once I reorganize some messy commits.

The next big task is still to fix outbound read receipts (i.e. to make it so that the bridge syncing a message doesn't make your > LINE contacts think you actually read that message). Once that is done, I'll consider the bridge to be in beta.

Thunderbird now has Matrix support based on matrix-js-sdk enabled in the Nightly builds.

The star feature is probably that we support multiple Matrix accounts in the same client. Right now all your unencrypted rooms with text messages should work fine. While we think we won't destroy your account's state, it's still recommended to use a testing account with it. During account setup, it will ask you for a password, even if the homeserver supports SSO. If you intend to log in through SSO, just leave the password field blank.

We're not quite at the point where we support all the things you love about chatting with Matrix. Many of the missing features and polish to make communication successful are tracked in this meta bug. The goal for that milestone is to enable Matrix in our Beta builds.

You can get a Thunderbird Nightly build at the bottom of thunderbird.net by switching from "Beta Channel" to "Nightly Channel". If you run into bugs with the Matrix integration, please report them through this form. When filing a bug, please include debug logs. You can copy the debug logs for the account by going to the "Show Accounts" dialog, right clicking the account and selecting "Copy Debug Log". Note that the debug log may contain information from any of your conversations, so you might want to check the contents before posting it anywhere.

NeoChat 1.2, our third major release, was released this week bringing many improvements to the timeline and text input component. If you missed it, you can read the announcement here: https://carlschwan.eu/2021/06/01/neochat-1.2-bubbles-better-text-editing-and-more/ and we even have a nice release video :) https://www.youtube.com/watch?v=4lcH4tm6uTk

Other than that, we started working on an integration with KDE web shortcuts functionality to quickly search selected text on the web: https://invent.kde.org/network/neochat/-/merge_requests/279. 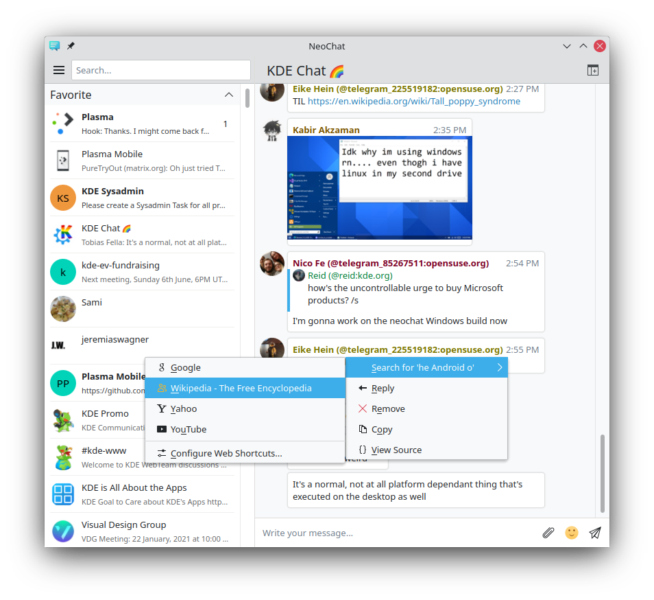 Callum, our GSoC student, after spending some time on Synapse, had now his first go at Nheko's codebase. He implemented, that you can now just enter the server name on registration instead of the full URL. This means entering conduit.rs or matrix.org works now nicely, since those servers are actually hosted at a different URL. He's now working on the Token Registration MSC, which he will implement in Synapse and Nheko, so exciting times ahead!

We also had a small contribution from pcworld, who fixed that if you only viewed the room list in the narrow layout, you would not get notifications for the last selected room.

I'll leave you with some words, that you may have heard a few times already: "Watch this space for next weeks update!"

A dozen merge requests have been integrated in our fractal-next branch since last week.

Amongst the more trivial changes, Julian made sure rooms are added to the sidebar in batch (!737) to improve performances, added in-app notifications for invite errors (!760), added a menu entry to leave rooms (!769), and implemented display of user and room avatars (!770). We also gained a right-click-menu entry to display event sources thanks to Kévin (!766).

Released Hydrogen 0.1.56 this week, with redactions. In the meantime, I've been making good progress on reactions, which should hopefully get released early next week. Midhun has made good progress on the right panel, ironing out the last bugs.

Here's a sneak preview of reactions (with slow network to show off the local echo animation):

I guess it's a long time from our last twim. Here's what is going on in that time: 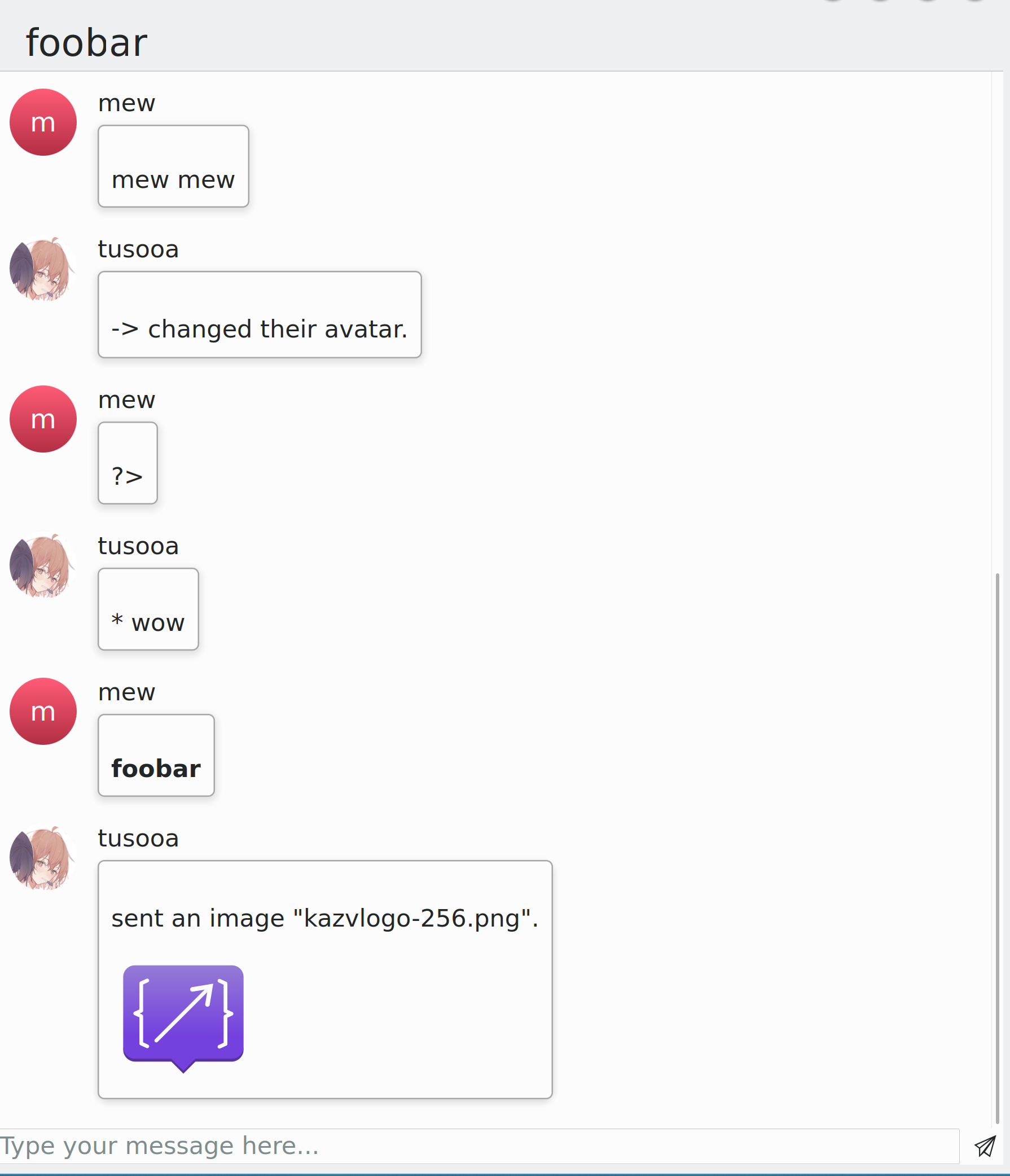 On August 21-22 the annual Free and Open Source Conference (short FrOSCon) will take place. Usually the conference takes place in a German University of applied Sciences Bonn Rhine Sieg. This year it will be virtual. On the positive side - we don't need to travel.

As German Matrix community grows this is a great opportunity to meet each other and hack together.

We are planing to do a virtual Dev Room this year. The idea is to exchange on the latest Matrix development and projects, get to know each other and drink <your_favorite_beverage> (virtually) together. 😉

To make it happen we need your help!

Dev Room is living from talks and workshops - this is your chance to present your Matrix project or to do a workshop!

If it's your first talk or workshop some free of charge coaching is included. 😉

It was a great place to chit-chat and to get your in-depth answers regarding Matrix at FOSDEM this year. 👍️

We also planing to have a virtual booth at FrOSCon.

We need your support in answering questions about Matrix or just to have a good time.

If you want to take part please contact @oleg:fiksel.info (or [email protected]) ASAP to add you to the Dev Room participants list.

BTW: we also have a #FrOSCon:fiksel.info room

You can also support circles on Kickstarter.