This week's room is: #art:matrix.org

"Share your artwork and drawings and chat about it. You don't have to be good!"

If you want to suggest a room for this section, send an email to

[email protected] or a Matrix message in #roomoftheweek:fachschaften.org

Yep, go ahead and email your suggested Matrix room-of-the-week to Timo!

MSC3079: Low Bandwidth CS API now has an experimental implementation containing a proxy server and mobile bindings! In addition, there's a blog post explaining how to use this implementation to add low bandwidth support to your servers/clients! This implementation will use about 22% of the bandwidth that the normal CS API would use. Please be aware that low bandwidth Matrix is in its infancy and is subject to change without notice.

Mostly Spaces and E2EE work this week. New spec release is still in the works.

Graph will return in a future edition!

I have spent quite a bit of time lately working on Pinecone network convergence for P2P Matrix. There's still quite a bit to do in order to call Pinecone "complete", but a network of 50 nodes now bootstraps entirely from cold much more quickly and converges on full end-to-end reachability in roughly 6 seconds. This is a significant improvement to before! Keep an eye out for future P2P Matrix demo builds using these new protocol changes. 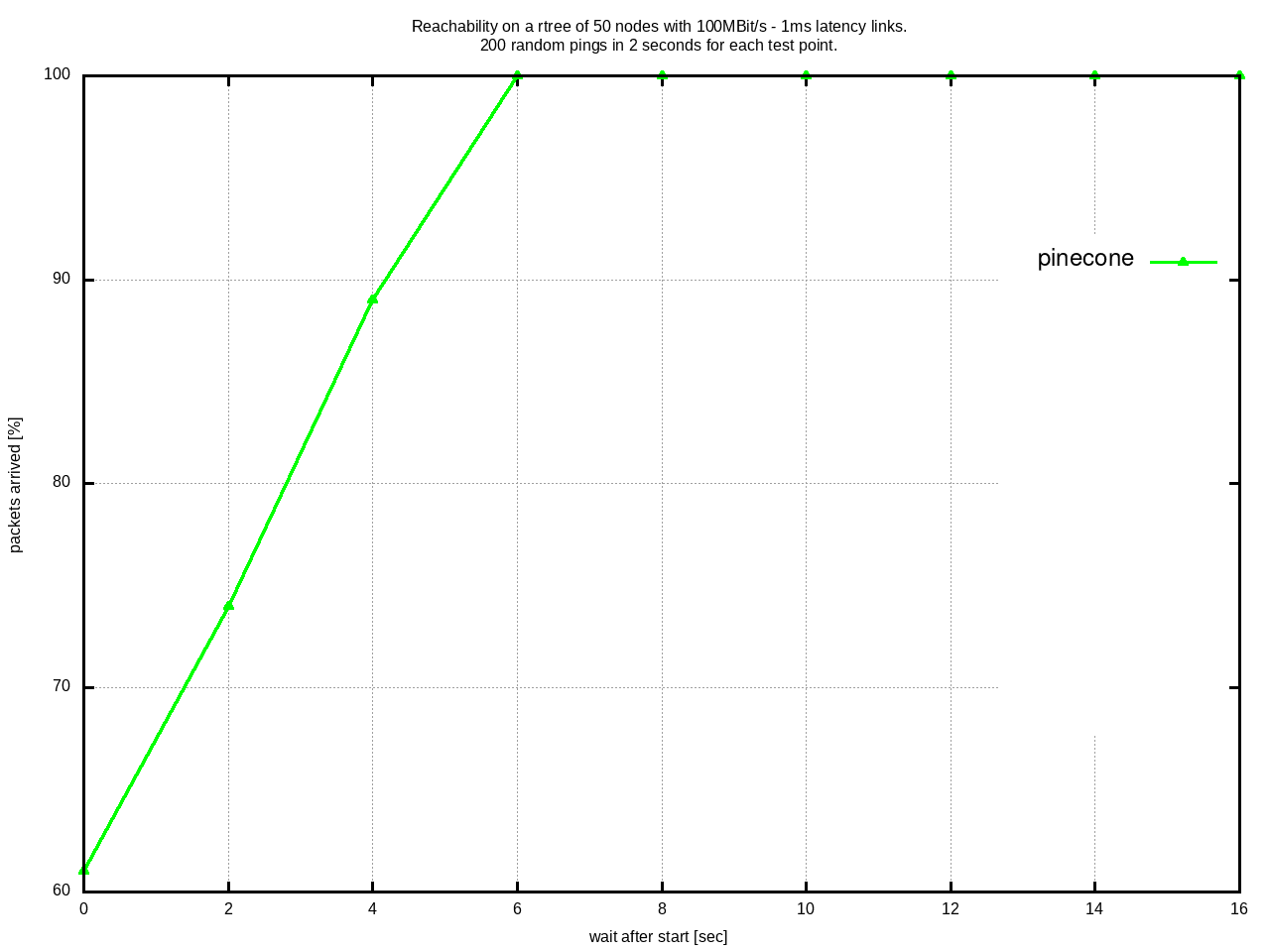 This chart also represents interest in Pinecone over time!

Hello! The last two weeks I mostly tried to make our database backend swappable so we don't need to rely on the sled database anymore. I was able to try out rocksdb, but there were bugs in the rust bindings which required inefficient and unsafe workarounds.

If you know about other key-value databases that work better with Rust, please comment on the issue:

This week I implemented the remaining API route for URL previewing. Already has some nicer url preview results like showing images with Twitter posts and proper YouTube previews instead of the cookie wall text :)

With this, synapse-media-proxy should be a drop-in overlay for all Synapse's /_matrix/media routes. I don't really recommend using it in prod yet however, but I have a test instance that could use some responsible disclosure pentesting at https://media.pixie.town, please DM me @f0x:pixie.town if you find anything :)

After over a year of work and over a hundred commits, we're now one major step closer to supporting MSC 2403: Add "Knock" feature, which allows users to request admission to rooms which would otherwise be invite-only. Specifically, last Wednesday we merged (#6739) which is an experimental implementation of the MSC, under an unstable prefix. Knocking is not available in any current room versions — we need to implement room version 7 for that — but the remaining work is minimal¹ compared to what it took to get to this point. 🙂 Major kudos to Sorunome, Anoa, and Clokep for their work on both the spec and implementation.

Otherwise we're looking forward to releasing Synapse 1.36 early next week, and we have some great things in store... but I'll not spoil them today! 🤫

From everyone on the Synapse team, have a great weekend!

¹: Well, on the server-side at least. No clients support knocking, yet...

Hi folks. Some time ago I asked here about any projects that provided a local Matrix "node" through docker, and it seemed not much existed in that space, so I went ahead and created the following repo:

If this is something that would be useful to you, feel free to give it a try and send some feedback, either here or through GitHub issues. Thanks in advance! I hope this is helpful to some of you 🙇

Thanks uhoreg for passing this on! Looks like a really useful way to get a local env running

Hi folks, just a quick update on the Libera.chat bridge situation. We're still rapidly working on the bridge, the milestone highlights for this week are:

We're still continuing to rapidly work on the bridge, with a release expected on Monday 🤞. For any of you who aren't in the know yet, you can start bridging to libera.chat by simply joining a channel like #libera-matrix:libera.chat or by searching the libera.chat room directory.

I'm hoping we'll be nearing the end of our journey on this bridge, and it will settle into a natural stable state over the coming days! Anyway, thanks everyone for your patience and we hope to see you on Matrix or IRC!

Hi bridge followers, today we've released 0.27.0-rc1 of the IRC bridge containing a huge number of changes following all the work we've been doing on libera.chat. Notable things to call out in this release are:

Please report bugs as you see them to https://github.com/matrix-org/matrix-appservice-irc, and let's all pray this will be a smooth release :)

Read receipt improvements are here! They are in temporary branches until they've been tested for stability:

After this, only a few read receipt improvements are left to be made:

I've been slowly refactoring the room and communities list to prepare it for spaces. This work is now mostly complete, changing ~4000 lines of code, of which 1500 just got deleted. All of the sidebars are now expandable and collapsible, so you can see the full name of your tags and communities and the lists should also update more dynamically now. Startup also only takes half as long as before on my system and Nheko uses 100MB less memory for my account. Next week I'll probably add spaces to the communities list as well as the room list.

Apart from that LorenDB has been rewriting the member list as well as the invite dialog in Qml and manu has been making progress on the room directory. All of that seems to be coming along nicely and behave much more reasonably than the old versions. There has also been a lot of progress on the Italian and Esperanto translations as well as a few smaller bug fixes and performance improvements.

I hope we will make it to space next week! 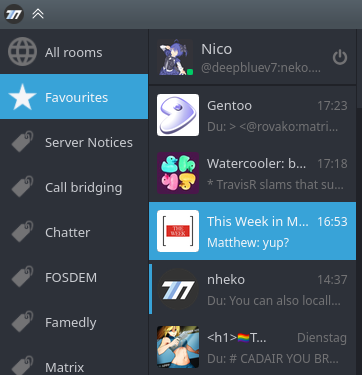 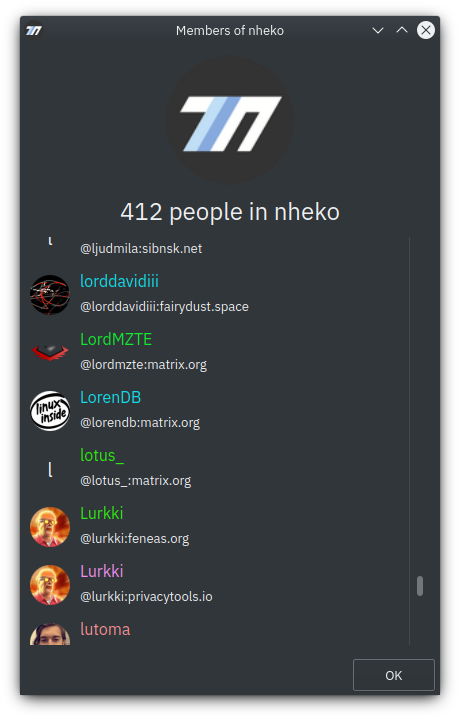 This week was a busy week for NeoChat. We added tons of cool stuff! We rewrote the setting page to add a bit of organization in the settings. This also pushed us to add new appearance options. You can now add a blur effect as background, change the color scheme of NeoChat and switch between bubbles and a more compact layout as you wish. 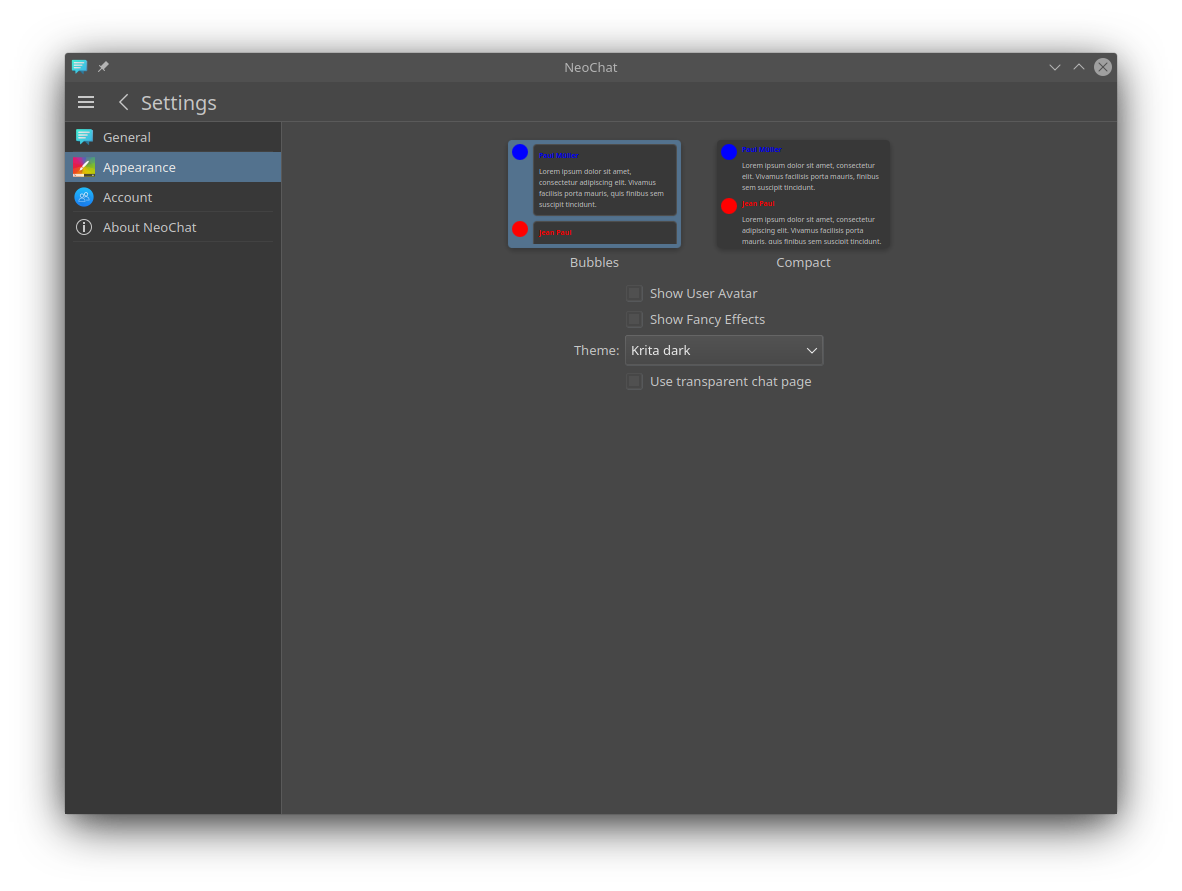 Another thing we worked on was spellchecking. NeoChat will now add a small red underline under misspelled words and will suggest corrections. This is using the Sonnet frameworks and will integrates perfectly with your personal dictionary from your other KDE apps. 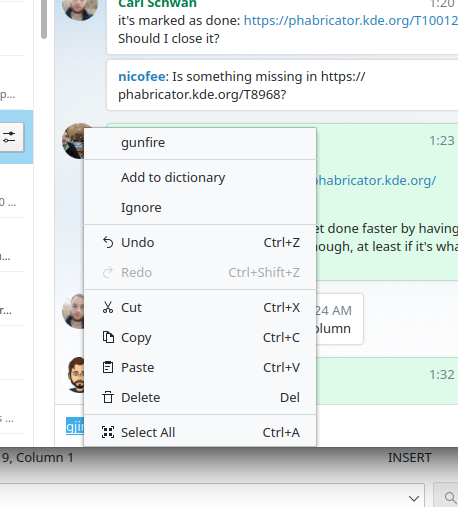 Finally something we added two weeks ago but forgot to mention, we added a quick room switcher using the Ctrl + K shortcut. 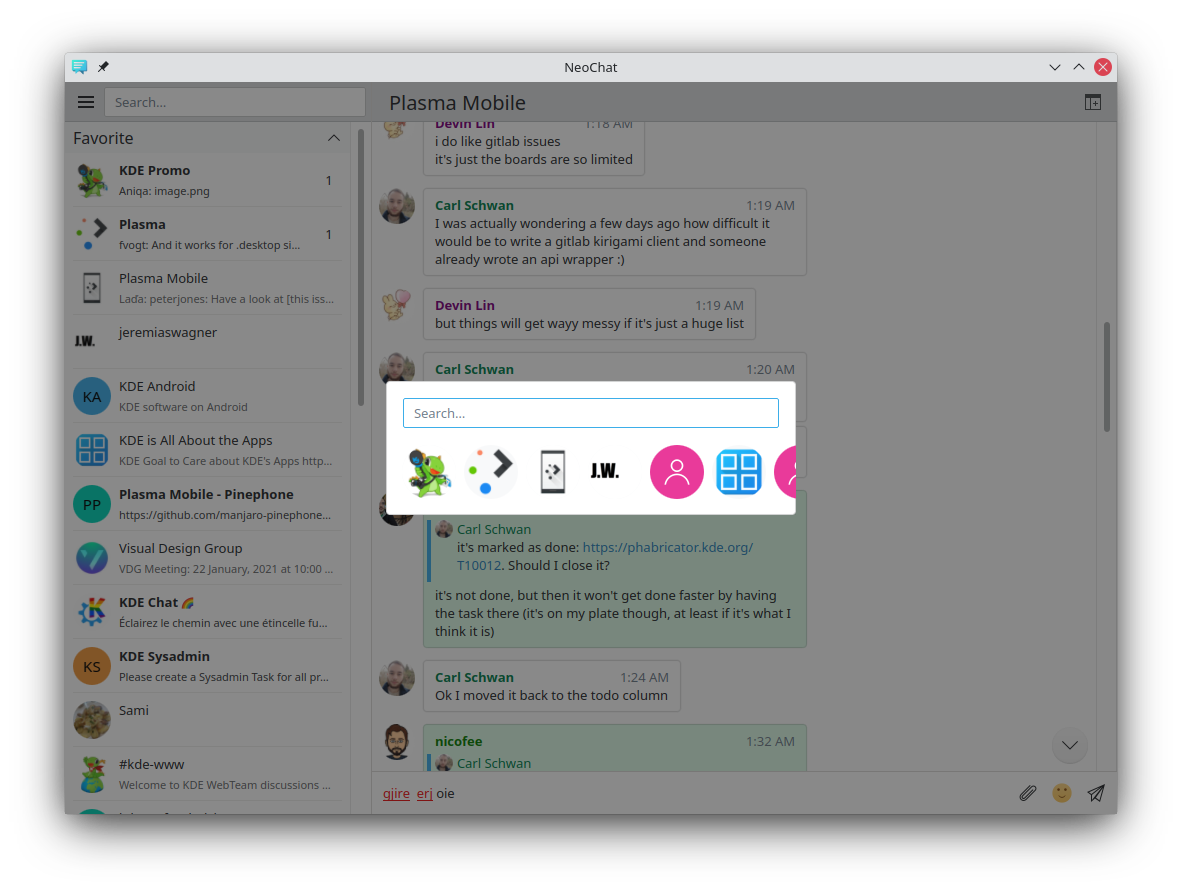 Another small release - libQuotient 0.6.7 is out, fixing an issue causing NeoChat to not add rooms to the roomlist after joining. Thanks to Carl Schwan for hunting the problem down!

Apparently my work-in-progress end-to-end-encryption implementation for libQuotient was bad enough to cause performance problems on my homeserver (Sorry about that!). This should be fixed now 🙂

Thanks to jo , Nico , joepie91 🏳️‍🌈 and poljar for helping to archive these improvements and hinting where improvements were possible to be made :)

Simple-Matrix-Bot-Lib allows anyone who needs a bot in a Matrix Room to do so without having to spend unnecessary time learning a complex framework!

If you live in France (or eurozone) and your Matrix-related project need some funds, you may candidate to the 2021 #MécénatCodeLutin grant program for FLOSS by Code Lutin. Candidates may fill the dedicated form before july 8th.