This week's space is: RPG

Spaces work continues with MSC3083 (Restricted room memberships), which will include a new room version due to the new join_rule of `restricted. On the other side of things, MSC3245 (voice messages) and by extension extensible events, is moving as the implementation work is pushed forward. Lots of activity on MSC3215 (improved moderation tooling) as well which will no doubt prove to be invaluable as the Matrix network continues to grow. 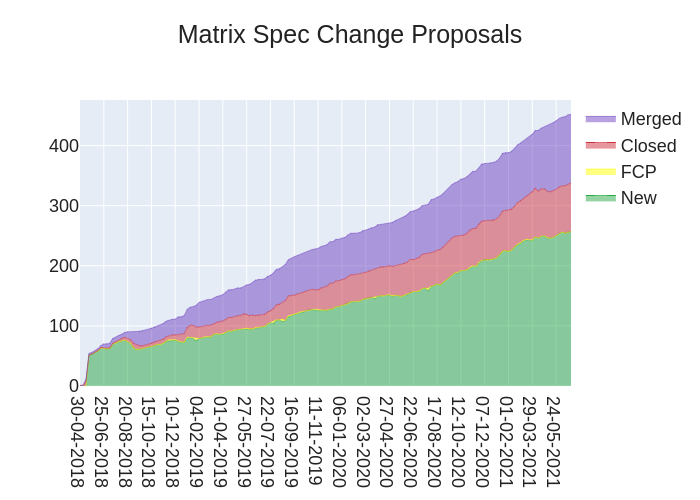 After some more work on swappable database backends, I worked on a few small features:

Knock, knock TWIM! It's a new week, and I'm filling in for Dan today to bring you an update on Synapse's latest progress!

Hot off the heels of Synapse 1.36.0’s release last week, we’ve put out 1.37.0rc1! It includes the long-awaited “room knocking” feature (note that no clients currently support knocking), a completely reworked pluggable modules interface and experimental support for backfilling history into rooms. With knocking support in, this means Synapse now has support for room v7!

Among those exciting updates, we also have the usual churn of bug fixes and improvements across the board. Many updates to the documentation as well as we lean into using the new Synapse documentation site more and more. Please help us test the RC if you can!

This week too sees some Kubernetes chart updates, with element-web being updated to 1.7.31 and matrix-synapse getting some fixes for envvars and mounts, as well as some improvements to the ingress support.

Element Web integration had been updated to 1.7.28 (1.7.29 available in branch testing)

It has been several months since we last updated you on MSC2716 for backfilling historical messages into existing rooms but we made some big progress this week and merged an experimental Synapse implementation taking us one step closer to importing the massive archive of messages on Gitter over to Matrix! This iteration will only make the historical messages visible on the local homeserver but we have plans to make them federate in the next. It's still early days on this before we can actually use it on Gitter. Here is a proof of concept to get your juices flowing:

Loving Hydrogen right now. It's fast and works great! See Bruno present reactions as one of the Matrix Live demos (scroll up)

In terms of code, this week we didn't get much activity. The only noteworthy news is that we can now send spoilers, and use two new commands: /tableflip and /unflip thanks to Smitty van Bodegom.

Aside from that, we had 2 productive BoFs during Akademy 2021. The first one was about creating a library with shared chat visual components for KDE's chat apps: NeoChat for Matrix, Tok for Telegram and Kaidan for XMPP, KDE Connect and Spacebar for SMS, ... The second BoF was more about NeoChat and Quotient and we discussed how to move forwards with some problems (e.g. non-hacky text input auto-completion) but also the roadmap around E2EE, Spaces and Widgets support. Speaking about E2EE, we will have some very good news to announce next week, stay tuned!

/me only learned about /tableflip and /unflip this today... and looking forward to this E2EE news!

In the past couple of weeks, Alejandro and Kai started the coding period of their GSoC internship and explained on their blogs what they will be working on. Their projects are respectively to add support for multiple accounts, and to bring Fractal Next to feature parity with current stable. Read more details on their blogs, and subscribe to them to keep informed as they go!

Julian managed to land the “Explore” view, our room directory. There may be some changes down the road, but it looks good for now: 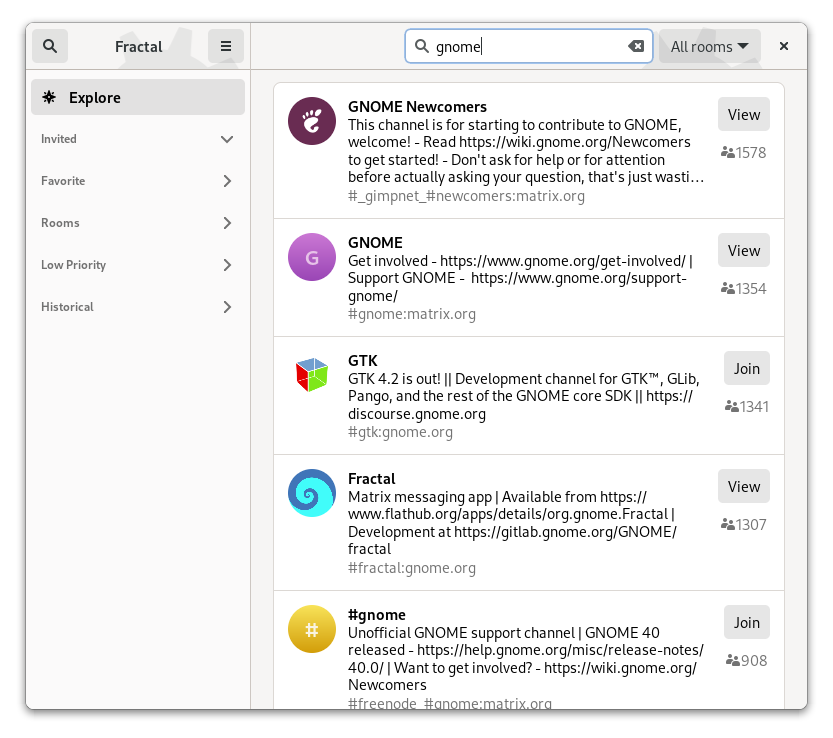 Newcomer Giuseppe De Palma removed bashisms from our git hook because they were preventing him from contributing. They then went on to tweak the history style to remove the grey background around it. They also got rid of a papercut from the login form: before his intervention, users needed to provide the full homeserver URL with the http:// or https:// scheme prefix. It will now default to HTTPS.

We also did some housekeeping work that should improve the experience for people joining us on the Fractal Next fun. After being away for a while, Christopher Davis came back with a patch to add a couple more build related directories to our .gitignore. Julian cleaned up the pseudo-milestone description that we had in the README, now that we have a proper Gitlab milestone. And finally, I added a warning on the login screen to better reflect on the Work In Progress state of the branch.

Updates from the teams! Android will return next week.

0.0.95 RC is out, available from the usual place at GitHub, and also as Flatpak from Flathub. The usual stabilisaton/bug fixing work, no new features compared to betas. This version is considerably better, and more stable, than 0.0.9.4 - packagers are welcome to push it as if it were the final release. Translators, please help to complete more languages: Polish is at 90%, Spanish almost 80%, and French just below 60% - you can make a difference!

Last week's news actually, but libQuotient master branch can built with Qt 6 now, laying ground for the GSoC works on PyQuotient - Python bindings for libQuotient. The library has also been updated to follow the latest CS API specification, which means basic low-level support for knocking, with higher-level library API for it coming later.

Polyjuice Util is a library of Matrix functions for Elixir that can be used for both client-side and server-side applications. Polyjuice Util 0.2.0 has been released, which includes functions for common errors, handling identifiers, and for checking room permissions. Thanks to Nico for his contributions to this release. This release also contains some backward-incompatible changes. See the changelog for more information.

Polyjuice Client 0.4.1 has also been released, which uses the new Polyjuice Util release, and adds support for the whoami endpoint (thanks to multiprise).

Hello dear Synapse Admins, synadm v0.30 is out. lt seems I was in "story telling mode" already when I wrote the release notes yesterday. That should perfectly suit a TWIM article as well 🙂 So there you go, copy/pasted from https://github.com/JOJ0/synadm/releases/tag/v0.30 with love:

New subcommand matrixsupporting execution of regular Matrix commands. As a first shot a command to issue any Matrix API call has been implemented:

Note that this is meant to be a convenience function in case a Synapse homeserver admin wants to quickly help users e.g set specific settings available via regular Matrix calls and not the Synapse admin API directly. Also note that it is not meant to replace the awesome Matrix CLI tools that are already out there. matrix-commander, matrixcli to mention just a few.

The second command below matrix is:

It implements a plain login on a Matrix server using username and password. It can even be used to retrieve a token for an admin user, e.g helpful for setting up fresh synadm installations. Read about it here

The README has been updated to point to the nicely rendered docs recently published at https://matrix-org.github.io/synapse/develop/usage/administration/admin_api/index.html

Update via PyPI or git as described in the update chapter: https://github.com/JOJ0/synadm#update

Thanks to the friendly people in #synadm:peek-a-boo.at for reviewing, testing, discussing functionality and giving advice. And for this release, a special thanks to @hpd:hpdeifel.de https://github.com/hpdeifel

Matrix Navigator aims to be a replacement for curl when querying and mutating room states, including permissions.

with the change of policy we deployed on GNOME's Matrix instance, it occurred to me that we had overlooked an important aspect in our relationship with Matrix: do we own our Matrix account? And the answer is... maybe! In this post I cover the differences between personal account, organisation-owned account, the importance of segregating activities on Matrix... and why this may change with Portable Identities in the future

the French government deployed Tchap, an instant messaging based on Matrix. They are looking for tech and processes oriented people to improve the service.

I know this isn't TWIM-worthy, but I figured people in this room would find it interesting: yesterday there was a very popular post on reddit about how we don't appreciate email enough, and in the comments there were some mentions of matrix as the counterpart for messaging:

Actually I think this is very interesting. Worth taking a read to understand how people not already using Matrix might see the world.