I'm the Principal Data Scientist for the Ansible Community. We're hoping to switch to Matrix as our primary platform in the near future, and I've just written up my thoughts on why that's a good idea, what the consequences might be, and where we go from here. Find it at https://ansible.github.io/community/posts/matrix_and_ansible.html

A concrete plan has been drafted for publishing the new spec release, and is currently undergoing execution. This release will include many changes that have built up since the last release (back before the new spec redesign even), as well as the new Matrix Global Version Number scheme. Look forward to it dropping soon!

Otherwise Bruno has been hard at work continuing to push forward the various aggregation MSCs (1 2 3 4). MSC3083 (restricted room memberships) is being updated as part of finalising the new Spaces feature as well as MSC2716 (history import).

As well as lots of new MSCs as listed above. Busy times! 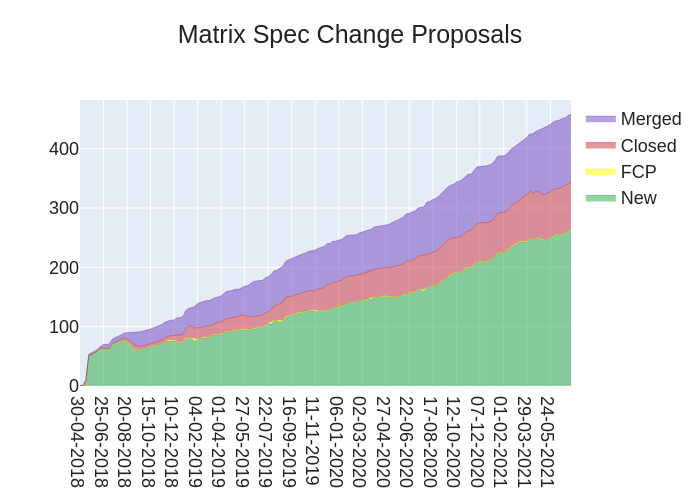 The last two weeks I worked on a few very big optimizations. We also almost finished sqlite support for Conduit, which is slower than sled in benchmarks, but has much better RAM usage characteristics.

We will stay highly tuned!

Big(int) news! This week Matrix.org processed its 2^31st event, exceeding the range of a PostgreSQL integer column for the first time. This caused a bit of a scramble in the aftermath of last week's spam attack, as we had a few integer columns in our schema which we needed to convert to bigint. Fortunately, we were able to complete the change sufficiently in advance (#8255), and also took the opportunity to audit other columns and sequences in the database which could conceivably overflow. Synapse 1.38, due out next week, will automatically migrate homeservers when they upgrade. We run the migration as a background task, so homeservers should continue functioning as normal throughout, though they may use a bit more disk and memory, especially when rebuilding indexes for the new bigint column.

We're also starting to hone in on our team's goals for this quarter, and it's looking like our primary focus will be on improving room join speeds. Wish us luck!

Lastly, we're overjoyed to announce that @reivilibre, a former intern on the backend team, joined Element this week! We can't wait to see where he helps us take Synapse!

This week too gets a Helm Chart update, with element-web having been updated to 1.7.32

This week was spent on adding proper support for LINE user joins/leaves (though invites/kicks are still a TODO), bug fixes, and ease of deployment. Docker and systemd setups will be ready shortly.

And this bridge should soon be listed on https://matrix.org/bridges/, if it isn't already 🙂 Thanks madlittlemods (Eric Eastwood) for accepting the PR!

Updates provided by the teams!

There are two announcements that we can share with you this week:

Apart from that, we have mainly been focusing on smaller improvements and fixes, while staying up-to-date with new Element releases.

For more information about SchildiChat, feel free to visit our website or check out our source code!

Also, feel free to join our Matrix rooms, which you can find in the new SchildiChat space: #schildichat:matrix.org

Spaces work is making progress. Some rooms can now be previewed. To improve that situation, I wrote an MSC to preview specific rooms. Alternatively we will try to get the previews for the few rooms you aren't joined to from the space summary API, currently we are just fetching the existing state. You can also now join previewed rooms and the design of joining invites was adapted to match it.

red_sky☄️ went through the pain of fixing the Windows builds after we changed our http backend last week. So if you want to try it out, you can test it on Windows. We also replaced the old, boring spinner with an animated Nheko logo. If you see that a lot and think it is Nheko's fault, don't hesitate to open an issue! But in most cases it will probably be your server. Sadly no screenshot of how the spinner looks like, my server is too fast and taking a proper screenshot is too much effort because of that. ;p

We also fixed an issue with updating device lists in the develop version of Nheko. If you were using the nightlies, now is a good time to update! In more E2EE news, symmetric megolm backup fixes the issues I had with the online key backup, so looking forward to implementing that. 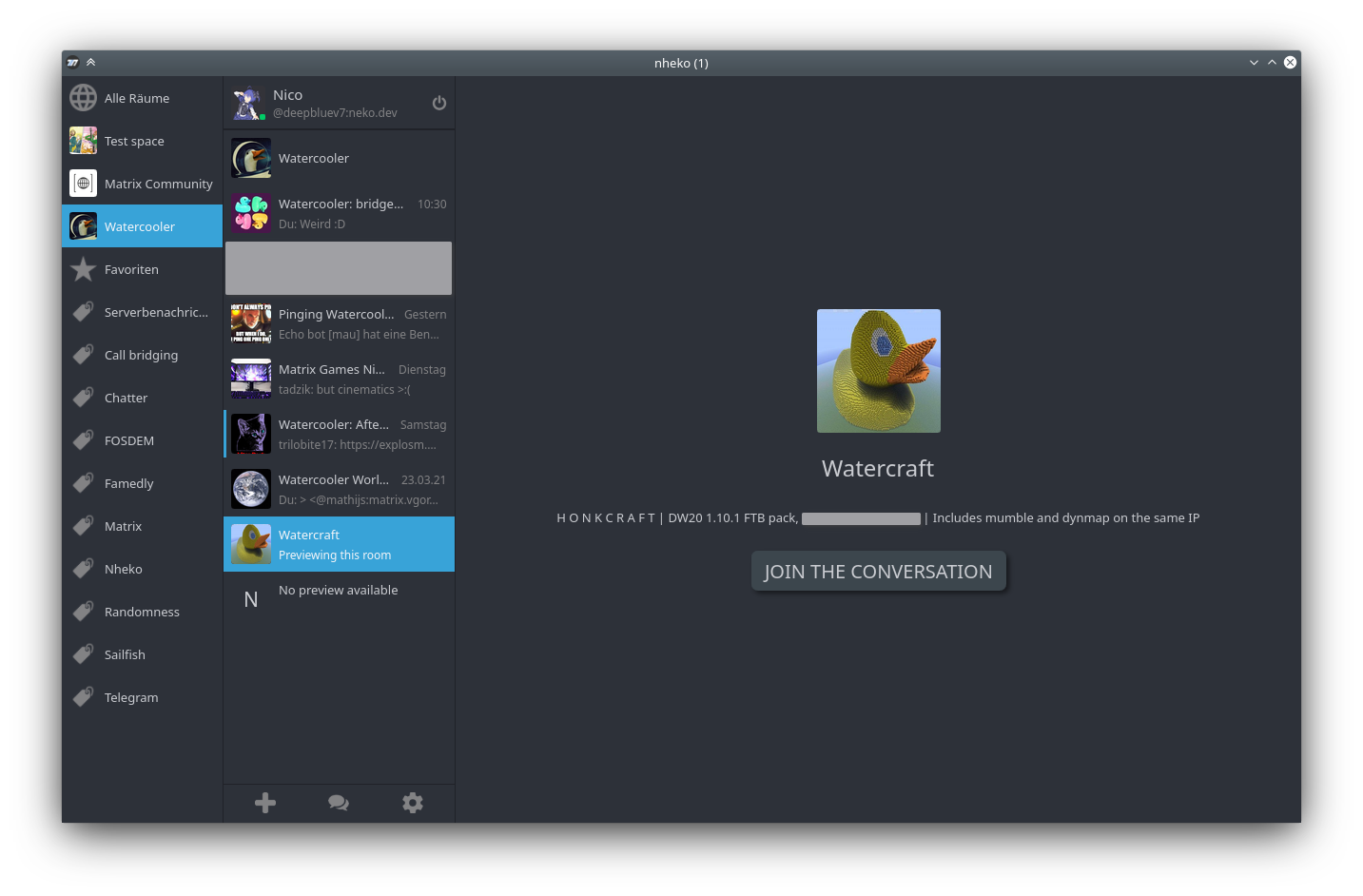 The latest release of opsdroid is out with various fixes which can be seen in the changelog. The main point to note for matrix users is that older versions of matrix-nio (the matrix client library used by opsdroid) did not support the synapse change to omit optional fields from sync. Therefore if you are using our docker images you will need to update to 0.23 to get a container with the newest matrix-nio included.

The other change which is relevant to matrix users is that Oleg has added support for version 2 of the Rasa NLU framework, so you can once again do open source, self hosted natural language bots.

This release adds a fix for compatibility with Synapse >= v1.38.0

This bot is based on opsdroid bot framework and aims to control actions in home-assistant via Matrix.

Feel free to come by at #home-assistant-bot:fiksel.info 😉

Thanks to Gwmngilfen I touched RStudio and toyed a little with some data as well.

You can find some graphs over at https://github.com/MTRNord/server_stats_r_statistics/blob/main/scripts/rooms_members.md

For the first graph the credit fully goes to Gwmngilfen :)

The second one is in log scale for both axis but essentially the same :)

This is obviously currently very spare but I hope to add more statistics when I understand R lang :) This is in fact my first time doing something with R so my skillset is limited :)

Matrix Bot inside of a Docker Container

Run Matrix Python bots inside of Docker Containers with Simple-Matrix-Bot-Lib and Docker!

This is a guide for isolating and running your Matrix bot within a Docker container. It is also applicable to bots written using other libraries and languages.

This week's space is: #mathematics-on:matrix.org

"For questions about any part of maths!"

In meta twim news, the twim updates bot (which posts in #twim_updates:cadair.com) has been upgraded to opsdroid 0.23 and now correctly keeps the formatted body when an event is edited.