Several members of the Spec Core Team reviewed MSC2674 (Event relationships) this week in order to help push along the efforts to finally ship aggregations in the spec. Otherwise MSC3245 (voice messages via extensible events) is moving along with final comment period proposed this week. The implementation in Element Web in reportedly working well, helping to prove the spec in practice. And finally, MSC3277 (scheduled messages) which appeared over the weekend to try and allow for scheduling events to send later in Matrix (and all the fun edge cases that come with it).

Thanks to everyone who submitted, read and reviewed MSCs this week. It takes people to move this stuff forward! 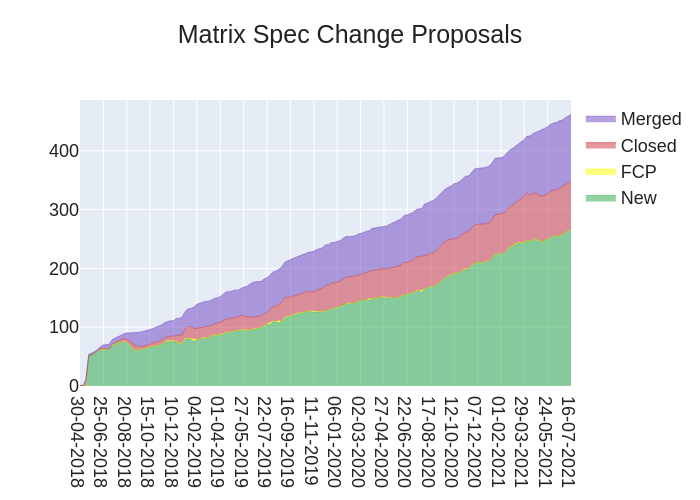 We heard from Callum last week, and will have more reports in future, but for now just know that all seven GSoC projects are progressing well. To remind yourself of this year's projects, see the list provided by Google or our welcome blog post.

I reckon you can count the two Fractal interns as well. :)

Reckon you're right pardner! We'll look forward to a roundup of the work done for Fractal too.

In case you missed it, we released Dendrite 0.4.0 on Monday and wrote a blog post about it! It's taken us a little while to get to this release, but it includes a number of quality-of-life improvements and changes that will significantly reduce the amount of resources needed to run a Dendrite server. The full changelog is available on GitHub and many juicy details in the aforementioned blog post, but at a high level this release includes:

Since the release, we've been working on:

Since our last update, our Sytest compliance numbers have been on the rise again, taking us ever closer to our goals:

The big news of the week is the release of Synapse 1.38, which converts several integer columns to bigint, allowing Synapse to process more than 2 billion (231) events. Which, incidentally, matrix.org did last week 📈:

But that's not the only thing new in Synapse 1.38. We also landed the ability to set an expiry time on cache entries, allowing you to reclaim memory from infrequently accessed caches. Configuring this to "1h" on matrix.org has already yielded a noticeable reduction in overall memory use 📉:

We'd encourage you to read the full announcement for more — See you next week 👋!

Another short update about my GSoC project, this time about the Synapse admin API for managing tokens. https://calcuode.com/matrix-gsoc/2021-07-16_admin-api.html

This week too brings updates to my Helm Charts, with Synapse having been updated to 1.38.0.

A bridge for LINE Messenger based on running LINE's Chrome extension in Puppeteer.

Docker is now supported, via Dockerfiles that actually work now! But for the time being, Docker images must be built manually, as I am yet to deploy a Docker registry for prebuilt images.

For more info on all of this, see SETUP.md.

What I'm working on next is a bot command to list all of your LINE contacts & groups (similar to mautrix-whatsapp's list <contacts|groups>), and the ability to sync a LINE DM by inviting a contact to a Matrix DM. This will allow messaging LINE contacts that the bridge didn't yet create a portal for.

And please, feel free to try out this bridge! It should be serviceable for day-to-day usage now. I still won't be able to host a public instance of it for a while, though (as it is fairly hefty due to having to run Chrome), so you'll have to self-host if you want to try it.

This week we fixed bugs. Switching room should now be quite a bit faster again and once Qt 6.3 is released with some important bugfixes, scrolling in Nheko should be super smooth. (We can't enable that flag yet, because of 3 bugs in the item pooling code in Qt.)

With updates supplied by the teams

Still working on getting a big update out today with rendering of formatted messages and a brand new member list in the right panel!

After a month of hard work, we(I as GSoC student and kitsune as mentor) have bindings with tests for almost all core classes and also initial version of the demo client, in which you can log in with a password or SSO, the server you enter is resolved automatically and also after successful login data is being synchronized. There is also a possibility to log out. So this part is on the same level as in Quotient.

Also, a small video with the client in action.

Over the first weeks of July, Teckids e.V. held their annual summer camp for kids between 9 and 15 years. This year, after we started introducing Matrix and Element as a chat platform from September 2020 onwards, the camp was heavily relying on the platform for various parts.

Before the camp started, we invited all 90 participants to a chat room to get together, share a bit about what they expect, already did with coding and technical stuff, talk about what food they'd like to have for the barbecue, and stuff like that. Many of them engaged in the discussion, and started exploring Element (before you ask, yes, we hat a lot of snow and party poppers 😛!). Some got really excited that they could even change or add features to Element, or ask for such changes – we had to promise to hold a session where we find out how to add one new animation to Element. Unfortunately, Element is developed on GitHub, so the potential young contributors are locked out by the exclusive Terms of Use there. We are trying to reach out to Element HQ to find a solution.

During the camp, verifying crypto sessions using emojis again made for a good party game to get to know each other (like, find the kid a nickname belongs to on the camp site, start verification, and compare emojis – a lot of fun that we, again, did not even have to start, because someone always finds out about it and asks what it is about).

Now that everyone got to know Matrix for chatting, in one of our workshops, the participants discovered that not only people, but also devices can send messages, and react to replies – in that workshop, the kids built a chat-ops IoT door beel (for their tent on site, or room at home). They soldered a circuit board to fit an ESP (MicroPython) micro controller on, and coded a small program (using templates with differing complexity levels), defining what the door bell should send when a button is pressed, on what messages to react, and the like. We produced a fun video about the project (German audio, English subtitles): https://eduvid.org/videos/watch/20a50c25-ecb4-48c0-9b13-de2548f290d4?subtitle=en . The (minimal and somewhat buggy) MicroPython client library is published as µtrix.

Now, sadly, the event is over, and we slowly see (as expected, only a part of the) participants moving over to our long-term project chatrooms; we will start clearing the virtual camp site chatroom during the weekend to make room for a new group.

Asked about the regularity of these events, Nik replied:

We are still experimenting with our new camp formats. As bad as it all is, COVID caused a lot of innovation here because we were forced to leave the known roads we normally travelled, and now we are starting to integrate all that new stuff (like really embracing Matrix) into outdoor and presence events. I think we are on a really good way with it, and surely I will keep posting updates that might be of interest for the greater community.

This week, I'm reporting the changes to our backend service since it last appeared on

All these changes are available from version 0.5.0.

The Reidel Law Firm from Galveston, Texas have produced an excellent business-oriented guide to using Matrix and Element. As they announced in a blog post last month:

Reidel Law Firm remains committed to providing top notch legal services in Franchise Law, International Trade Law, and Business Law while maintaining accessibility, (one of our Firm’s core values) to our clients, colleagues, and friends of the firm. Utilizing our own secured chat platform allows us to be in communication with our clients around the world while maintaining the utmost in data security and client privacy.

I believe in Matrix+Element and encourage my clients and law firms to get ahead of the curve or get left behind and become irrelevant. Email has to die, its just the worst. Also, I forgot to note earlier that the guide is copyright free. I hope other business owners will use and revise it for their own uses.

Strong words! You can find the guide from Reidel on their website.

This week's room is: #formula1:matrix.org

"The pinnacle of motorsport! We're in an exciting time in Formula 1 with a close championship and exciting battles. Come hang out and chat about the upcoming race in Silverstone on July 18th!"