This week gematik announced they will use Matrix for their interoperable instant messaging standard.

Loads of coverage is available, take a look!

In terms of Spec Core Team MSC focus for this week,

Room Version 8 has been proposed as part of MSC3289! This intends to include the new "restricted" room version from MSC3083, which allows access to a room based on one's membership in another room, as is most useful for features related to Spaces. 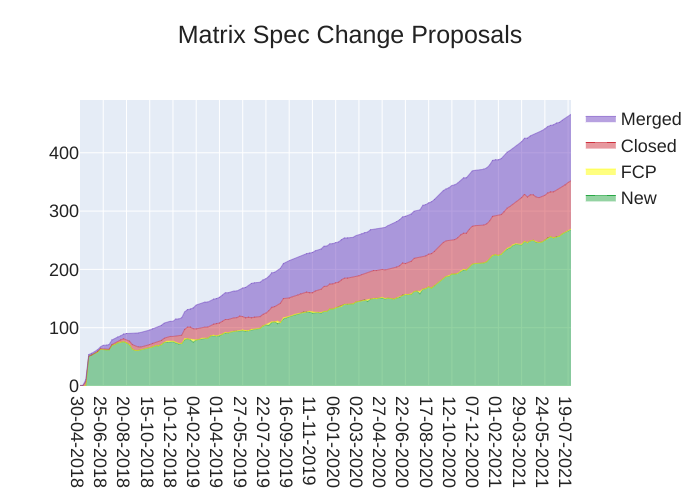 sorunome has been working on MSC2545:

Sorus Image Packs MSC2545 is taking shape more and more! While barely anything happened on the actual MSC itself, nheko recently implemented a sticker picker based on it, and there is a PR for fluffychat for a sticker picker, too, finally making stickers interoperable between clients of different vendors!

Here's a video of fluffychats sticker picker in action: https://gitlab.com/famedly/fluffychat/uploads/26382317e2424d7566eb18e102ddd6cb/fluffy-sticker-picker.webm

🚨 Yesterday we published Synapse 1.38.1 which mitigates a client bug triggered by changes to /sync responses in 1.38.0. Specifically, new Element Android sessions were unable to decrypt messages in end-to-end encrypted conversations.

⚙️ Otherwise, we've been doing quite a lot of internal / infrastructure work. Notably, we've completed the move from three separate CI systems to just one: GitHub Actions. We're also, for the first time, publishing Debian packages for our Release Candidates. We hope these changes move us towards a more reliable and seamless release process.

We'll have a lot to talk about re: Synapse 1.39 next week, but until then, enjoy the weekend! 🏖

And this week too has brought updates to my Helm Charts, with element-web being updated to 1.7.33 and matrix-synapse to 1.38.1

A bridge for LINE Messenger based on running LINE's Chrome extension in Puppeteer.

These changes make it possible to sync LINE chats/groups that previously may not have gotten synced, due to the intricacies of how LINE on Chrome handles chat history (especially on first use of the bridge).

LorenDB has rewritten the invite dialog as well as the memberlist in Qml. This means they work now much more reliably and show the users in appropriate colors and a few other small improvements.

Apart from that, Nheko now has support for sending stickers! This is based on Sorunome's awesome MSC2545, so no integration manager is needed and it is trivially easy to share your sticker packs (just invite someone into the same room!). You can use stickers from your account data or upload stickers into a room so every room member can use it. If you found a sticker pack you like, you can enable a pack from a room globally by going into Nheko's room settings. You can check my current preferred set of stickers here: matrix:r/nico's-stickers:neko.dev

Currently you can't edit a sticker pack yet from Nheko. Support for that will come in the near future. Until then you can use either FluffyChat, Element's DevTools or my hack to import Telegram sticker packs into a room. Note that Nheko's sticker pack support is incompatible with integration server based sticker packs like the one Element uses. On the other hand, you don't need an integration manager to use them! Custom emote support based in the image packs MSC is coming in the future to Nheko too.

Furthermore we fixed some bugs to move E2EE in Nheko out of Beta. We are close now and we have a plan!

That's all, don't get your hands too sticky! 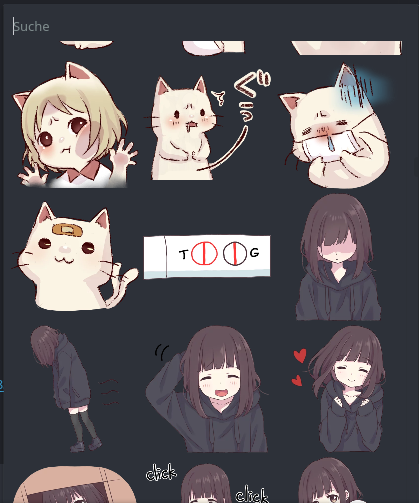 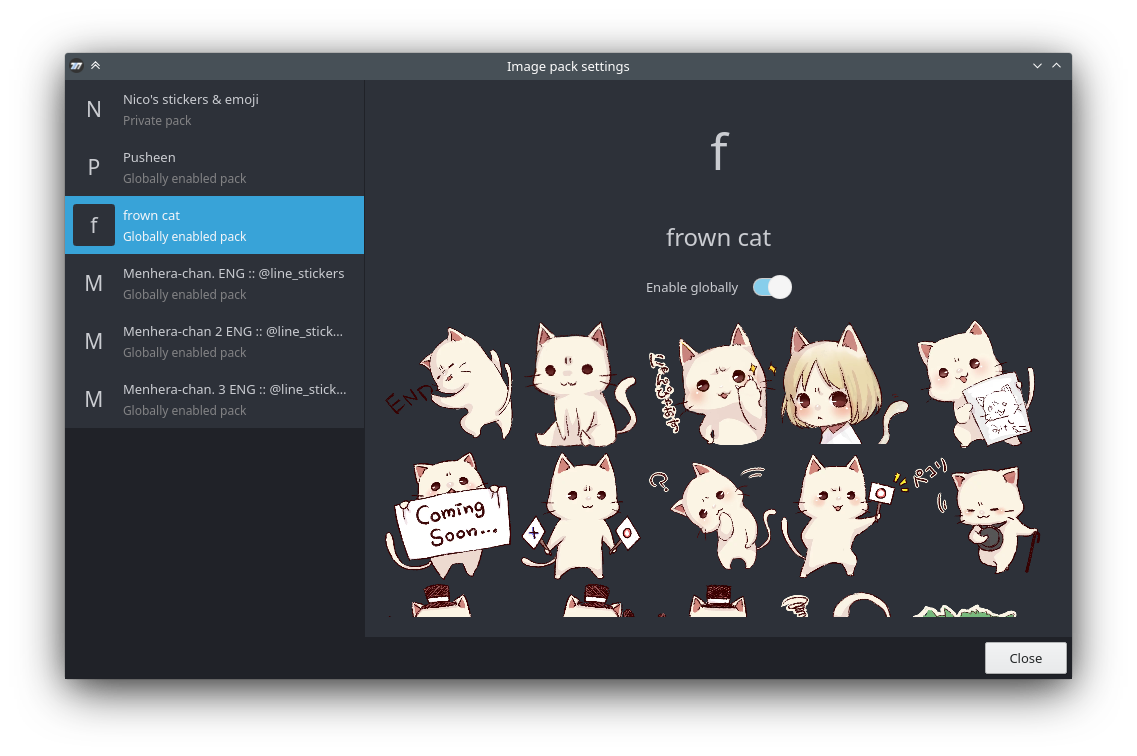 It’s been three weeks already since our last update and we have a fair amount of new things to report.

As I write this, our interns Alejandro and Kai are at GUADEC, the annual GNOME conference, presenting during the interns lightning talk. The former has submitted a couple of merge requests (!793 and !794) that were necessary for the UI to accommodate his upcoming multi-account work. The latter has provided a view for when no room is selected. As for their mentor, Julian, he changed member loading so it only happens once a room is opened, to improve performances. He also changed Matrix event handling to use SyncRoomEvent, which paves the way for display of various message types in the timeline of a room.

And to conclude this summary, we welcome 🎉 newcomer Veli Tasalı who fixed a papercut I reported: when typing long messages, buttons next to the message entry were expanding along with the entry and now they keep nicely aligned.

Šimon Brandner shared some images of the new VoIP UX: Naturally the screen sharing feature will allow you to share your own screen, rather than Šimon's!

We've integrated the LinkedIn bridge into Beeper. The bridge is in beta and is generally ready for use. Since the last update, we moved it to GitLab, added a Docker image, and implemented reaction and redaction handling in both directions! We also fixed a bunch of bugs across the board to improve reliability.

The Android SMS bridge mentioned in the last update is progressing. It should be ready for self-hosted use in a few weeks, so our next update will probably include that.

Related to the SMS bridge, I've made mautrix-syncproxy, which is a microservice to do the /syncing required for end-to-bridge encryption (to-device events and such) in the cloud and forwarding the data to the normal appservice transaction endpoint. When combined with mautrix-wsproxy, it allows the SMS bridge to only have a websocket connection, which uses significantly less battery than a HTTP request every 30 seconds. The sync proxy partially implements MSC3202 and the to-device part of MSC2409 (partially because it only does individual users rather than all appservice-owned users). 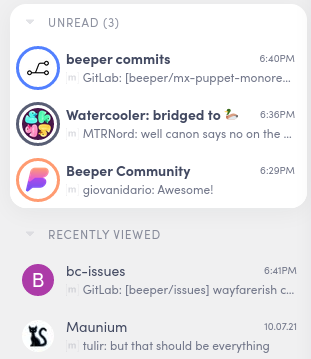 Just tagged and pushed version 2.4.0 of the Ruby SDK, along with an updated image for the example bot. This version adds support for the Matrix URIs as well as some basic spaces functionality, it also fixes some errors due to the removed empty /sync fields in Synapse 1.38.0

Feel free to drop by #ruby-matrix-sdk:kittenface.studio for any questions or comments.

Hebbot (This Week in X bot)

Several GNOME contributors and I have been following TWIM and really enjoyed the concept. Since open source is about sharing ideas, we wanted to deploy something similar for GNOME.

I gave this room's beloved twim-o-matic a try and fiddled a bit with the code. But I soon found that it is too specialised for matrix.org. That's when I decided to write a project agnostic TWIx bot based on matrix-rust-sdk called Hebbot!

Here is how it looks in practice with a companion website for GNOME. If you’re interested in how it looks behind the scenes, have a look at this blog post which explains how it works.

I released a first version on July 17, but I’m already working on making it smarter for a next release. In the meantime you can already use it for your project!

Love it, though I wish twim-o-matic had more of my attention! Maybe we can retire it and use Hebbot..?

This week I have developed a new plugin for OctoPrint which is a tool for controlling and monitoring 3D printers, which sends notifications about your prints and status of your 3D printer to matrix. The existing OctoSlack plugin also has Matrix support but fell foul of the /sync response changes in Synapse 1.38, and also sent the images from the camera to Matrix as inline images rather than m.image events, so they didn't render on some clients.

My new plugin can send messages on most events supported by OctoPrint, but the core events which are configurable through the OctoPrint web UI are print started, paused, completed and failed as well as print progress notifications. If you want Matrix notifications for your 3D prints, you can install the plugin through the official OctoPrint plugin repository or by installing from the GitHub repository. If you have any feature requests or pull requests, contributions to the plugin are very welcome.

Here is a preview of a print progress notification from something I was printing last night: 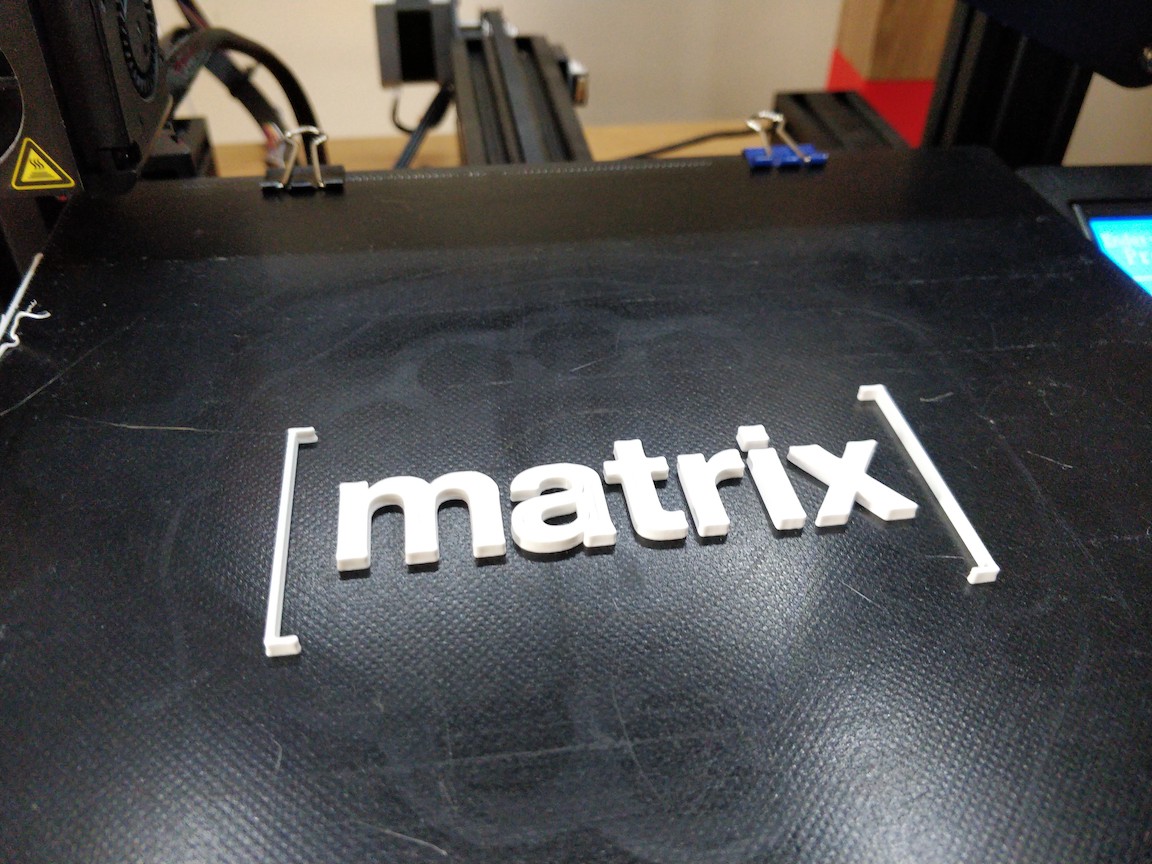 Following on from my post about how I'd like to convince Ansible to move to Matrix, I looked into the relative sizes of the networks, took a look at the active users in our channels, and even took a shot quantifying bridge restarts and netsplits to assess relative stability. Check it out here

A new Beyond Chat room (#beyond-chat:matrix.org) has been created! This room is meant for discussing various projects that build on Matrix for use cases beyond chat, such as collaborative documents, blogs, generic key-value databases, tools for thought, etc. Please join if these topics interest you. 😄

Hey everyone, my name's Robert Long. I've just joined Element last week and I'm coming in to work on the VoIP team. This week I started working on full mesh video conferencing and I'm super excited to share more as the work progresses!

This week's room is: #godot:feneas.org

"A very helpful and friendly place for general discussion or questions pertaining to the FOSS Godot game engine and using it to make games, whether one is just beginning to learn or wish to discuss more advanced aspects of game (or Godot) development."

Amazing to see @Navy_Innovation showing off low-bandwidth @matrixdotorg decentralised comms to 1SL (Head of the @RoyalNavy) using Titanium: our CivTAK Matrix plugin. At this rate Matrix is on track to become the common language across the entire public sector!⚓️📻🇬🇧 https://t.co/UDIA2GBVm9