We forgot to mention that Doug is also the creator of Watch the Matrix! https://github.com/pixlwave/Watch-The-Matrix This allows you to use your Apple Watch as a native client (rather than through another iDevice)

These fellows all recently started to work for Element, and (claim!) to enjoy it. Element are HIRING, so if YOU think think you'd like to apply, check out https://apply.workable.com/elementio/ for current listings and details of how to apply.

We finally did it! We released Conduit Beta: https://conduit.rs/release-0-2-0, we even made it to the Hacker News frontpage: https://news.ycombinator.com/front?day=2021-09-02

This is huge news for us and hopefully we will see a lot more Conduit instances pop up in the near future.

Congratulations to Timo and the gang, you're making superb progress!

You may be wondering: what's up with all of these abandoned MSCs?? The answer is that the matrix-org/matrix-doc repo changed its base branch to main to help preserve the git history since the spec website rewrite. In doing so, all PRs were automatically updated to the new base branch by github... except those that were coming from deleted users and repos. Those ones were simply closed!

But as they seemed to be have been effectively abandoned by their authors, it was more of a cleanup than an accident. However, if your MSC was affected by this change and you would like to continue it, please contact someone in the #matrix-spec-office:matrix.org and we'll help you out.

The random spec of this week is... MSC2448: Using BlurHash as a Placeholder for Matrix Media!

MSC2448 defines a way for clients to include a "blurhash", or a short, textual representation of a blurred version of an image, inside events which other clients can show while waiting for thumbnails to download from media servers. This replaces the potentially blank space while an image's thumbnail is loading with a (IMO) beautiful alternative!

Yes I wrote this MSC... but I swear it's what the script picked! We do not question the script!! 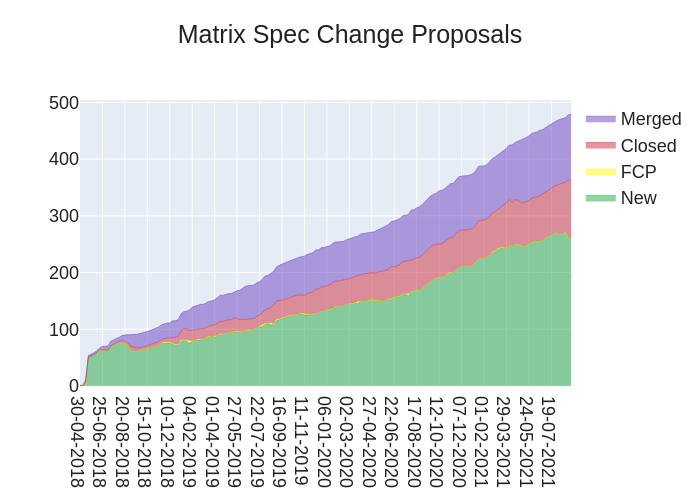 And yet again another week of Kubernetes updates, my Helm Charts now have element-web on 1.8.2 and matrix-synapse on 1.41.1

Hey folks! I had some spare time today so I've invested it into the matrix-github bridge. The latest work is GitHub discussions support. It's still needs a bit more testing / minor feature implementation, but I leave you with a screenshot below of how it currently integrates spaces! 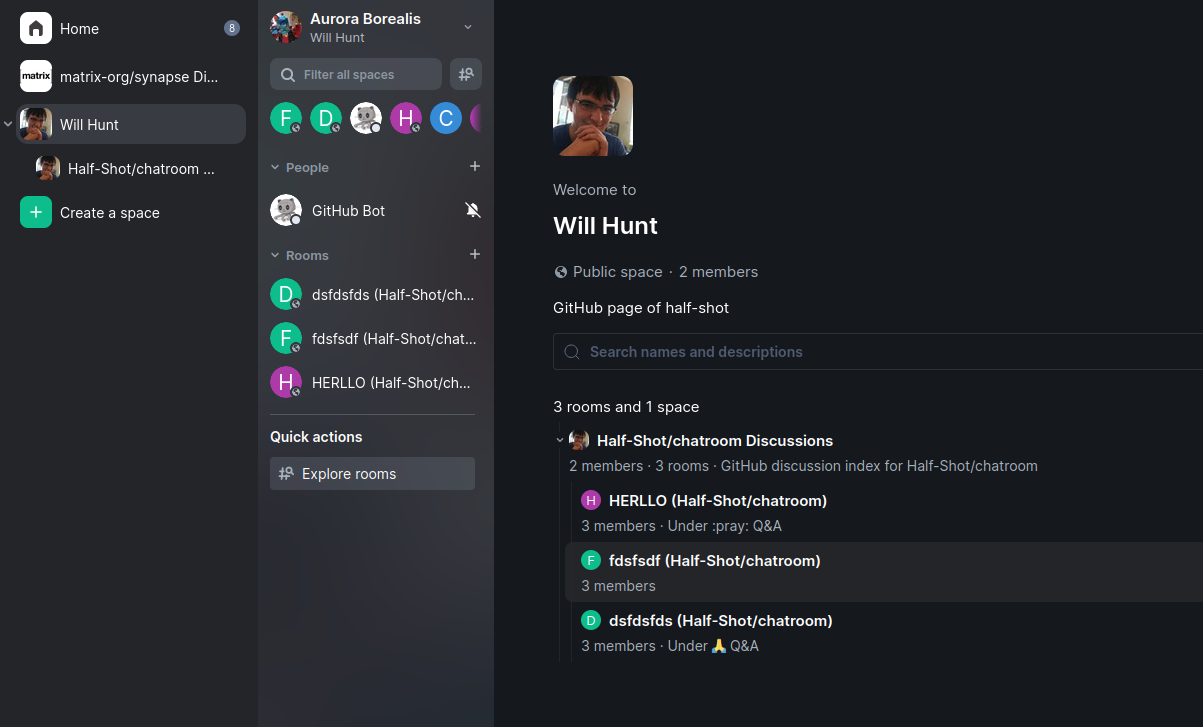 We had a race between 3 Translators this week. All 3 of them were trying really hard, so in my opinion every placement is a first place, buuuuuut Thulinma actually came first by bringing the Dutch translation from 5% to 100%. A few hours later Priit came in as a close second updating the Estonian translation to 100%. ISSOtm noticed that and tried to catch up which resulted in a 3rd place finish for the French translation. Now I understand the excitement people feel watching others compete in sports without having to do anything themselves!

red_sky (nheko.im) meanwhile fought a much more difficult enemy, Apple documentation and code signing! To be honest, I expected him to be beaten, but Nheko's DMGs are now actually properly signed and notarized. So if you are on macOS, you should now see less ugly warnings when installing Nheko. All nightlies building of the master branch are signed as well as our future releases.

In more community contributions, resolritter fixed the right click menu not working on replies. So you can copy a link from a reply now by right-clicking it without having to scroll up. Thulinma fixed window alerts not working when using conduit, because Conduit does not implement the /notifications endpoint Nheko uses and he helped me debug and fix device lists not showing up when using Conduit as well as sessions always getting rotated in "Send encrypted messages to verified devices only" mode.

In our work to stabilize E2EE we also now require a proper secrets daemon running on Linux (and other platforms, but there it is always provided by the OS). This is used to store the pickle key as well as the cross-signing secrets, so that an attacker can't read the from the config file. We already used such a daemon before, but we failed silently and we didn't use it for the pickle key until now. So if this prevents you from running Nheko, please open an issue so that we can work on a solution. Those APIs can be really fickle so additional testing and feedback would help us out a lot!

Also exciting is that Nheko now supports playing encrypted audio and video files without storing a temporary unencrypted copy on disk as well as animated images like WebP and GIF! It took us a while to figure out a proper solution, but now you can send animated stickers and you will finally be able to understand why other people were lauging at still images. (We also had to fix some bugs in our sticker editor, where we didn't add the mimetype to the sticker info for that.)

Some more embarrassing news, I didn't know I was a moderator in #conduit:fachschaften.org, so I happily pinged everyone in the room while discussing room mentions. To prevent that from happening in the future, Nheko now shows a red warning above the message input if you will be pinging the whole room to give you time to reconsider. If that is not enough to stop me from doing that, we might require confirmation before sending such messages in the future, but so far this seems to work. Pinging everyone by accident can really scare you and composing a message in Matrix shouldn't be scary!

I hope I didn't forget anything and please make sure you check out Conduit, since they are doing a great job in revealing bugs in Nheko!

This release fixes a bug which makes it impossible to send images in unencrypted rooms. It also implements a complete new designed new chat page which now uses a QR code based workflow to start a new chat. 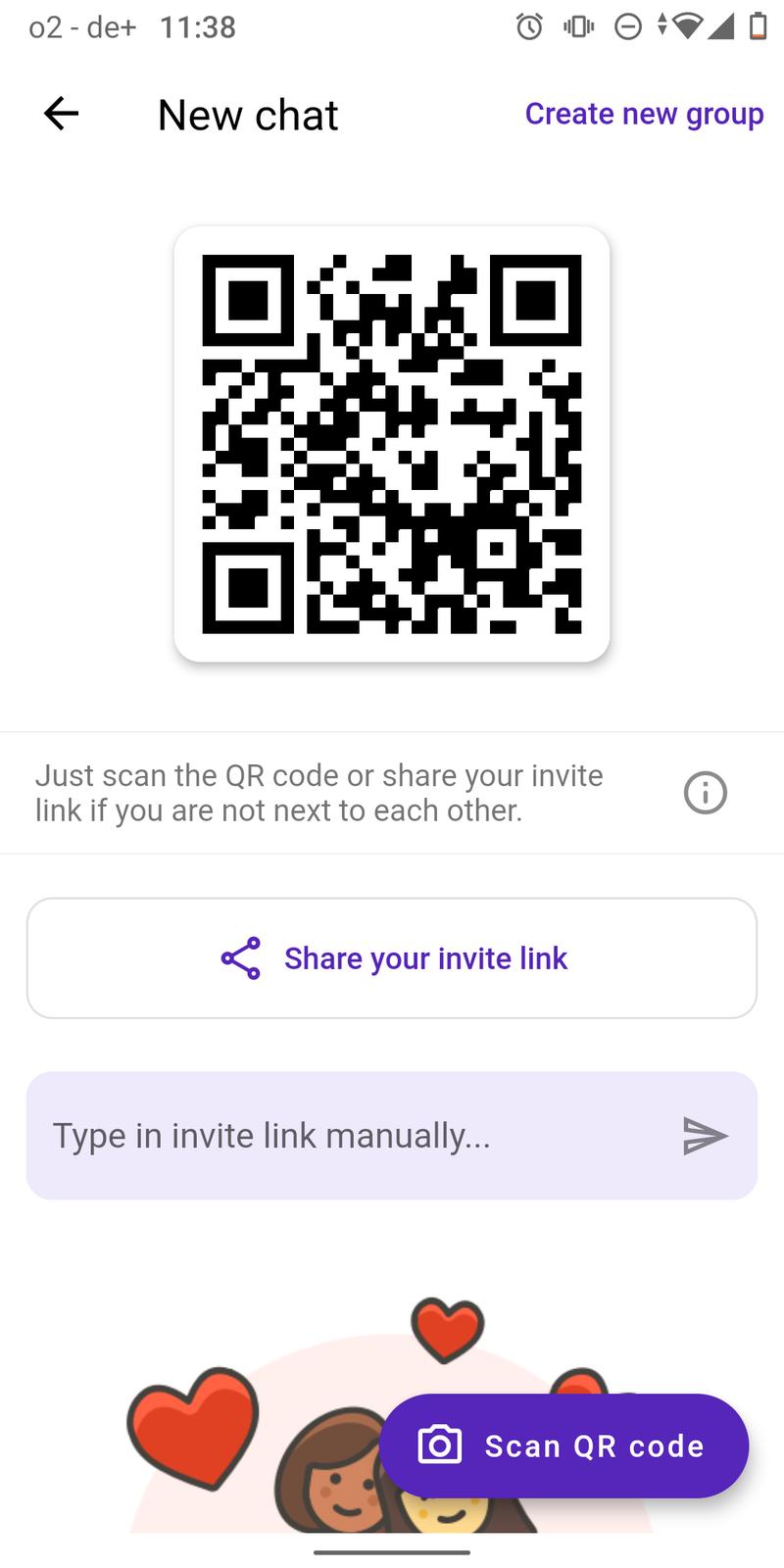 This version of the simplematrixbotlib package adds the ability to send messages formatted in markdown via the bot.api.send_markdown_message() method. Example usage is shown below:

Circles is a project to build a secure, end-to-end encrypted social network, using Matrix as the foundation.

We're getting very close to a real App Store launch. The latest beta release this week is 0.98 This version might be The One! So please, if you haven't tried Circles in a while, give this one a shot. Also please share the link with any friends and family who you think might be interested. The current signup token has plenty of slots for everyone.

If you want to see some activity in your circles, invite me to follow your Community circle and I'll invite you to follow back. I'm @cvwright:kombucha.social.

If you've been using Circles with your own (non-Kombucha) server, you probably DO NOT WANT this version. Support for bring-your-own-server will return very soon after our App Store launch.

The CoMatrix project enables the usage of the Matrix protocol (more precisely Matrix Client-Server API) for constrained IoT devices via CoAP and CBOR in a constrained network (e.g. a 802.15.4/6LoWPAN network).

CoMatrix provides a gateway, which ports Matrix to CoAP/CBOR/(DTLS). This gateway communicates with constrained IoT devices on one side via CoAP+CBOR and translates to the Matrix protocol on the other side (i.e. HTTP+JSON). CoMatrix also provides a client library (for RIOT-OS) which is a starting point to implement CoMatrix clients (for constrained devices) which are able to interact with Matrix homeservers via the gateway.

I have made a small 120k pipeline-agent software (including all dependencies except NodeJS v8) which can run on multiple platforms (including OpenWRT) and takes pipeline work over the Matrix protocol. In the end it's going to be used to setup things like VPN connections between gateways.

We also have a commercial web portal almost published where one can create web apps and configure pipelines to process the results. And yes, the portal also uses Matrix as its persistent storage -- it was implemented using my Matrix CRUD Repository from last week :)

The agent software (pipeline-runner) is open source and has zero (0) runtime dependencies except NodeJS, and available from here: https://github.com/sendanor/pipeline-runner -- It's still in early development, though.

This week's room is: #music-discovery:matrix.org

"Discover music through peers - Please write a small description of your discoveries. No uploads of non-free music please. For discussions and chat please visit the room's sibling #musicdiscussion:matrix.org "