As just blogged there is an important security fix coming for several Matrix clients. More news, and patched versions will be announced on Monday. Though there is no evidence this vulnerability has been exploited, please be ready to upgrade on Monday.

Lots of new MSCs this week. Thanks to everyone contributing!

I'm actually surprised myself that this wasn't part of the spec already! Looks like it would be a nice to-do to get this implemented and then checked off by approvers. Anyone want to submit some PRs to HS and AS implementations? 🙂 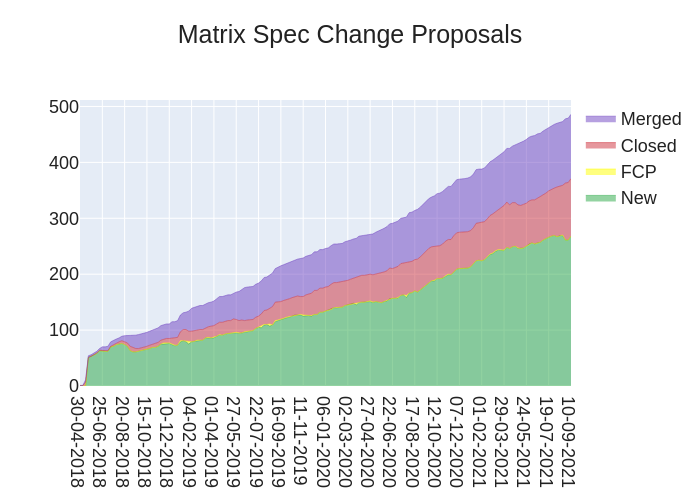 Dimension, an integration manager alternative for Element, got a refresh from @TimeWalker to bring the project up to modern day standards. Please give it a go if you've been running Dimension, and report bugs if there's problems! While I haven't personally had time to maintain it as much as I'd like, it's great to see people taking on 3 year old bad code and fixing it 😄

For TWIM readers, Dimension is an "integration manager" that replaces the default one shipped with Element. It's not entirely mobile-ready yet, but does give a user interface for managing various bots, bridges, and widgets. In practice, an integration manager isn't needed as most bots and bridges (and even widgets) can be set up without an integrations manager, like all of https://t2bot.io/ (ironically, given Dimension was originally targeted at t2bot.io). People do still use it though to configure self-hosted platforms with their very own Element, Synapse, bridges, and bots.

While I still probably won't have much time personally to maintain it, PRs are certainly accepted. Dimension is a bit complex to work within and test, but people in #dimension:t2bot.io should be able to help out.

Synapse 1.42.0 is out now! This release includes support for Room Version 9, which fixes an issue with Version 8's support for restricted rooms. We also implement a bunch of new MSCs (including MSC3231: Token authenticated registration by Callum Brown as part of his Google Summer of Code project), improve efficiency, and sidestep a longstanding issue with users getting stuck in unsupported room versions. Read the announcement for details!

This Sydent release also includes support for Jinja2 templating, a complete overhaul of our CI/CD pipeline, and a comprehensive update to the codebase to follow modern Python practices including the addition of mypy type hints throughout.

Lastly, we'd like to welcome Shay to the Backend Team at Element. Her work as an Outreachy intern paved the way for the recent improvements to Sygnal and Sydent. Thanks, Shay, and welcome aboard!

And another week, another Kubernetes Helm Chart update, this time seeing matrix-synapse updated to 1.42.0 - as well as a whole lot of fixes to support the new ingress object version introduced in Kubernetes 1.19

Hi folks, we're massively pleased to announce the third major release of the TS/JS bridging library matrix-appservice-bridge. This release contains several large breaking changes to the previous way of life, most notably we have stopped using the matrix-js-sdk for most of our code, instead using the matrix-bot-sdk (Hi TravisR , we see you up there!).

There are several reasons why we went this way:

Thanks to Travis and the matrix.org bridge team for working through these changes!

There are a bunch of common sense improvements that break API compatibility in this release also, so please be sure to check them out and update. We don't anticipate supporting 2.X except for extreme circumstances.

Finally, we'll be updating the matrix-org suite of bridges over the coming weeks so please watch for bugs and let us know how we're doing!

After a couple of weeks/months of internal testing and public beta testing, the latest stable version (1.2.0.sc42) now supports UnifiedPush!

This means that you can now choose your own push provider, if you do not want to use Google's FCM push notifications. Huge thanks to @sim_g:matrix.org for working on this!

You might remember my short story from last TWIM about the race between different translators? Seems like that one was good enough to motivate a few people to contribute translations. While those don't seem to be 100% complete yet, we saw a significant jump in translation percentages (especially Portuguese), so thank you to everyone who contributed to that!

Thulinma also made the whole userprofile scrollable, which improves the experience on small screens a lot. He also implemented message deduplication by event id, which is required by the spec to be done on the client side. This fixes a lot of duplicates when using conduit and your join event appearing 2~3 times on synapse.

We also fixed an issue with how different homeservers update one time key counts and added some additional code to remove old one time keys, if we ever uploaded to many (which might have happened in the past in a few edge cases). We also now escape img tags in usernames correctly in more places, redundant date separators when paginating back in a room should not appear anymore and tastytea decreased the margins on blockquotes, so that they look less jarring and take up less space.

So many merged requests have been merged since our previous update two weeks ago that I can’t even 😲.

The biggest news is that multi-account support landed in fractal-next (don’t be fooled by the title of the MR, it’s more than just a widget!). I feel like this is one of the most requested features across all clients, yet not many have it yet, and I’m ecstatic that we’re joining them 🎉. This work was done as part of GSoC by Alejandro under the mentorship of Julian 👏. 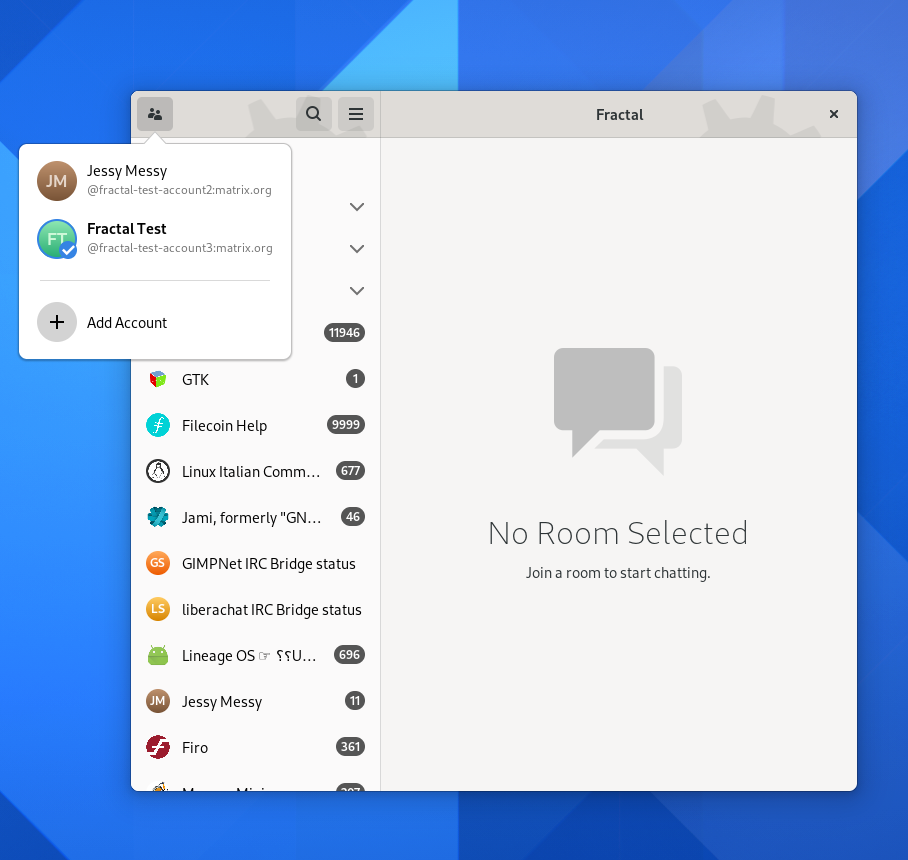 Kai made it so that rooms are sorted by activity in fractal-next, like they already are in stable ✔️. He also fixed module inception, for better code quality 🐛.

Julian landed a whole bunch of changes ❗️ He added scrolling and a scroll to bottom button, fixed keyboard shortcuts and a wrapping issue with long “words” that caused the timeline to jump to a wider size. But all this pales in comparison to loading previous events 🤯

v0.6.0-beta.2 has been published of matrix-bot-sdk as an early version to support encryption on bots and improvements to appservices. It's a bit self-directed to figure out how it works, but #matrix-bot-sdk:t2bot.io is available to try and help out.

Please give it a go and report bugs. The final v0.6.0 release is expected to contain not only encryption support for bots, but also appservices and real documentation. For now though, it's just the bots.

After 6 Months I finally got a use for this again so I finally did update this.

Basically everything as before but now including recent tokio, recent (stable) matrix-rust-sdk and rust edition 2021.

Source as before over at https://github.com/MTRNord/mrsbfh

It's an "automation backend" bot of etke.cc and has following features:

Miounne hits first stable release. I already shared some info about it here some time ago... but now it's stable! Source code has 83+% of unit tests coverage and some bizzare bug have been fixed.

Besides, now you can use pinned version of the bot (docker registry)

PS: we have #miounne:etke.cc room to discuss (whine) and post updates about it

Patience, a full stack integration testing approach for Matrix clients and servers, has added initial support for Hydrogen this week. As it already supported Element Web, we now have a (basic) system for testing multiple clients together which is taking shape! 🥳 From here, we plan to add configuration options to express the permutations of clients you want to test together.

This project is still in its early stages, but we hope to eventually have support for many different clients and then use it to test common flows like user verification, which can differ quite a lot across clients. If you're interested in this topic, feel free to join the new #matrix-patience:matrix.org room.

Someone has been making Matrix fanfic! I'm not sure how federation ties in, and for some reason they feature rubber duck debugging at one point but otherwise it looks fun :) https://www.youtube.com/watch?v=9ix7TUGVYIo