We've been chatting with Denis about the vulnerabilities disclosed by Element this Monday.

If MSC2918 above is giving you feelings of déjà vu, don't worry. It already had FCP proposed, but due to a resolved concern being incorrectly processed by mscbot on github, a new FCP proposal was carried out.

In other news, MSC3381 (Polls - mk II) receive a fair amount of attention this week. It implements inline polls via a new m.poll type and makes use of the concept of extensible events. Do check it out if you're interested in voting through means other than message reactions!

Otherwise Alexandre Franke and myself will be looking at cleaning up the CI of the matrix-org/matrix-doc repo next week, as well as continue to move the infrastructure for the new spec release forwards.

The random spec of the week is... MSC1235: Proposal for Calendar Events.

This one is entirely new to me, and has some slight overlap with some work for MSC2762: Allowing widgets to send/receive events, where we were thinking about how a widget could act as a calendar using Matrix rooms and events as a calendar backend.

The more you know 🌠 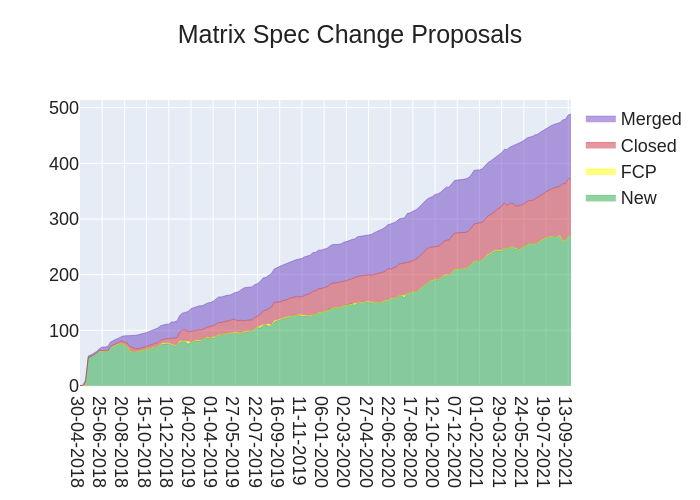 The Synapse team is busy gearing up for 1.43.0 next week, which will make room version 9 the default for newly created restricted rooms, among other things.

We've also been doing quite a lot of work on Sydent. Notably, last week's 2.4.0 release introduced a few regressions which have been resolved in subsequent point releases. The one-shot case folding migration script for Sydent is still performing unexpectedly slowly; look for that to be resolved soon.

As the end of the year approaches, now is a good time to ensure you're ready for the deprecation of PostgreSQL 9.6 (November) and Python 3.6 (December). Do you have plans to upgrade to Pg 10 and Py 3.7 or newer? If not, there's no time like the present! 🗓

Lastly, Hacktoberfest 2021 is less than two weeks away! Many Matrix projects intend to participate, including Synapse.

With rooms version 9 as the default, it feels like Spaces are trying hard to escape beta!

And yet again more Kubernetes Helm Chart updates this week, with element-web being bumped first to 1.8.4 and then 1.8.5. More improvements for the new ingress object in K8s 1.19 also landed.

Better message formatting coming up in v1.2.0, I hope 🤔

matrix-docker-ansible-deploy has also been updated with the new release, thanks Slavi!

mautrix-hangouts has turned into mautrix-googlechat. It's still in alpha stage, but text messages work in both directions, media from google chat works and threads from google chat are bridged as replies.

Find more about Cinny at https://cinny.in/ 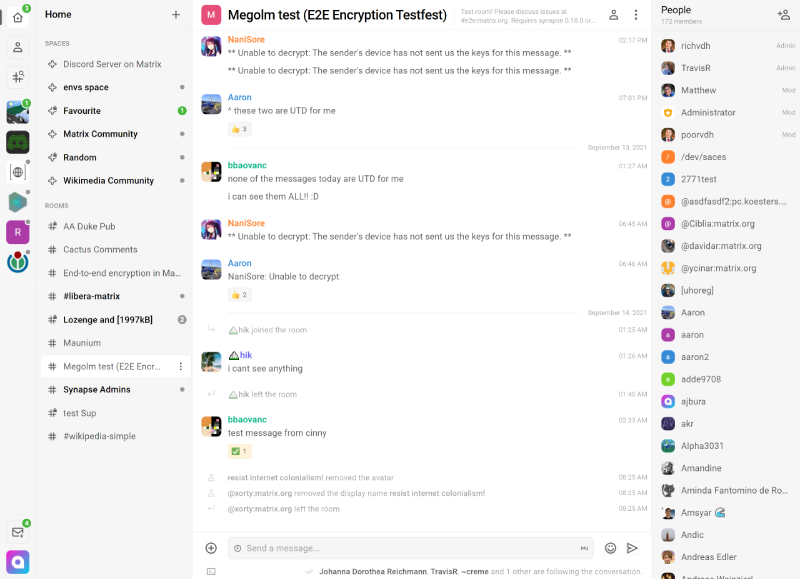 Alexandre Franke got a bit carried away and announced in French:

Released 0.2.9 & 0.2.10 this week with the main thing being improvements in preventing scroll jumps when resizing or loading more content in the timeline. Not 100% of scroll jumps will be solved with this release, but it should be improved a lot. Please report any issues you may encounter in this area! There were also a few bugs fixed, see the linked release notes. Try it out at hydrogen.element.io!

Beeper is a unified chat app built on top of Matrix. We've created 10+ open source Matrix bridges and integrated them into an easy to use all-in-one service which does not require setting up your own homeserver. You can learn more at beeper.com.

We've been hard at work for the last few weeks and have a number of updates we'd like to share across all our clients and bridges.

For detailed release notes, check out our changelog here: https://beeper.notion.site/Beeper-Product-Changelog-cdbc7b68526d45f7b8ced8d4ba170c8d 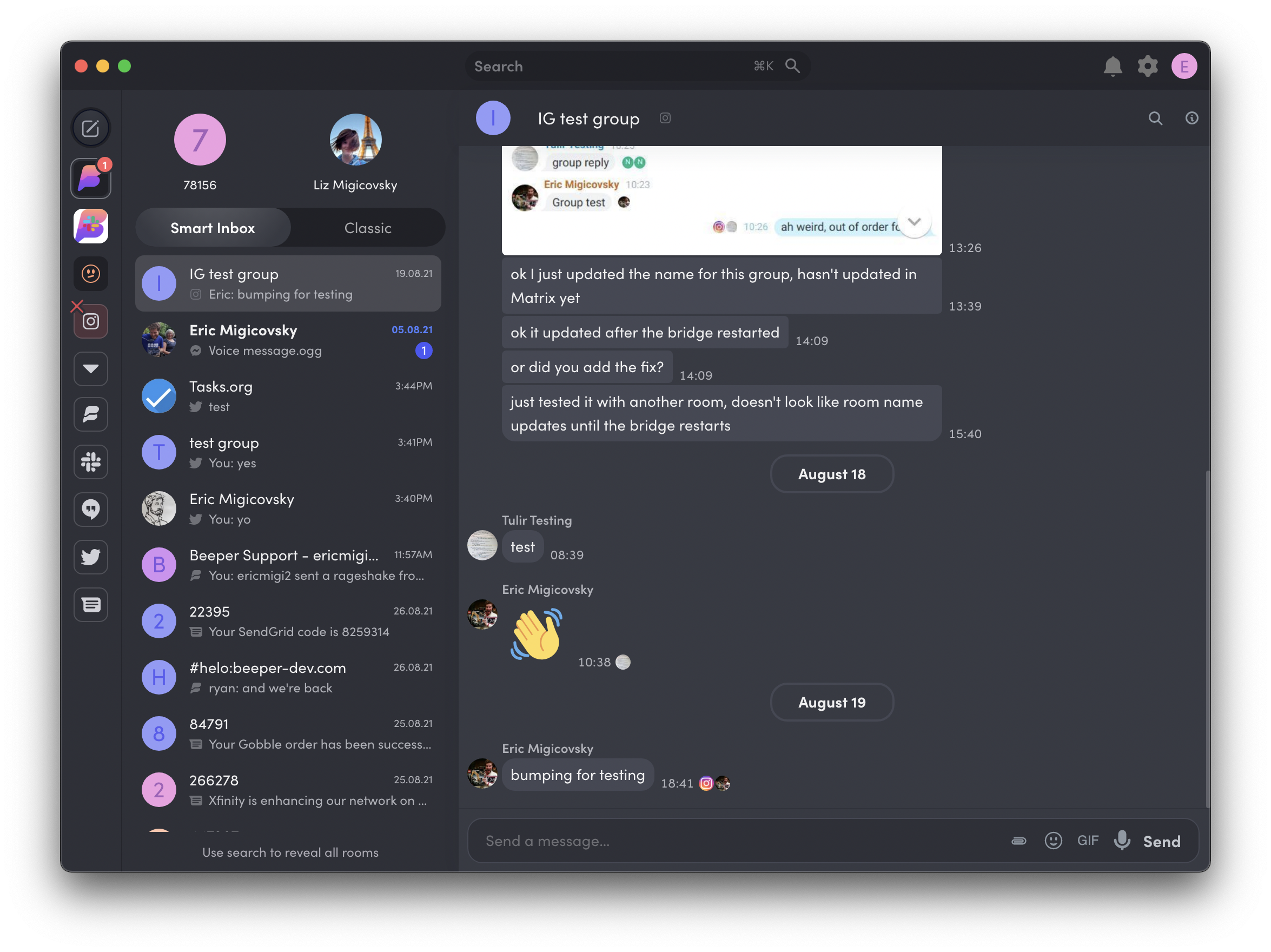 Check out our Jobs page here https://beeper.notion.site/Jobs-Beeper-ff5da486daed462ebfc4b21eacc48cae. Apply via that page or just send a DM @eric:beeper.com

Nheko got a lot more colorful this week. red_sky (nheko.im) and LorenDB finished up the jdenticon support. This means instead of the first character of a users display name, you now have the option to see a colorful avatar for users without an explicit avatar. You may have seen something similar on Github and other platforms. Currently this needs the qt-jdenticon plugin, which is a bit troublesome to install correctly, but we should improve that in the near future.

Prezu added a homeserver entry field to the room directory, making it much more useful (no history yet though). Thulinma added a /goto command to navigate to specific events or room and fixed scrolling to a specific event (in the past it only approximately scrolled to the right location). Symphorien added the Alt+A shortcut to navigate between rooms with active mentions and notifications. Additionally Priit completed the Estonian translation.

Additionally we released a security fix on Monday (together with a few other clients). We only released a fix for the master branch in Nheko instead of also the latest stable release. This confused a few people, but I hope my explanations made sense. The gist of it is:

I hope this clears up some of the confusion. Feel free to visit us in #nheko:nheko.im and tell me, that I am wrong. 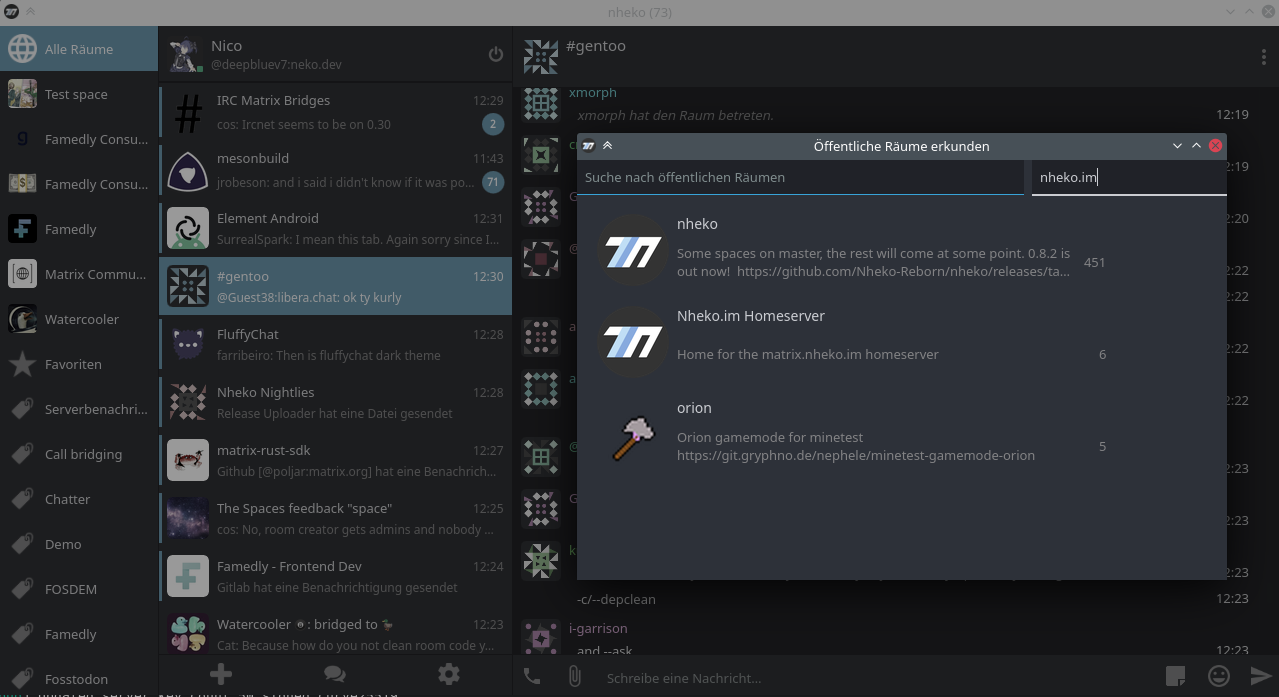 This week saw two releases of libolm, a library that implements olm, megolm, and some other Matrix-related encryption functions. The main changes in version 3.2.5 are new functions for getting error codes rather than error strings so that implementations don't need to rely on string parsing to decode errors, and added support for fallback keys in the Android and iOS bindings. There were also improvements in error handling in the unpickling functions, and the shared library no longer exports certain private symbols, which caused problems when those same symbols were exported by other libraries. The initial implementation of this last change caused build failures in some environments, so version 3.2.6 was released to fix this.

Polyjuice is a collection of Matrix libraries in Elixir.

A few from the wizarding world this week.

The Polyjuice project wades further into bad pun territory with a new project: Polyjuice Draughts, a set of checkers to verify that a homeserver is set up correctly and is accessible for clients and federation. It is similar in goal to the Matrix Federation Tester, but also checks client connections. It can either be run from the command line, or it can be used in a Matrix room, thanks to Igor, by sending a message of the form !servertest <servername> in a room that has an appropriately-configured bot in it. There is currently a bot in #synapse:matrix.org that can be used.

As you can see from the screenshot, my server isn't quite set up correctly, and I should fix it some day...

Polyjuice Client 0.4.3 has been released. This release adds functions for getting room membership (thanks to multi prise) and checking the server spec versions, along with some bug fixes.

I have converted the script for auto updating the Element-web instance to latest version from Gist to the full Git repo MurzNN/element-web-update and added support for .env file to set desired variables.

This is a bash script that checks the new released version of Element from official Github repo and if it differs from installed - updates the local files with deleting old version (to cleanup old files) and unpacking new one, but with keeping the config files by mask config*.json.

You can put it to your crontab.daily and got an always fresh Element with forgetting about manual update routine. 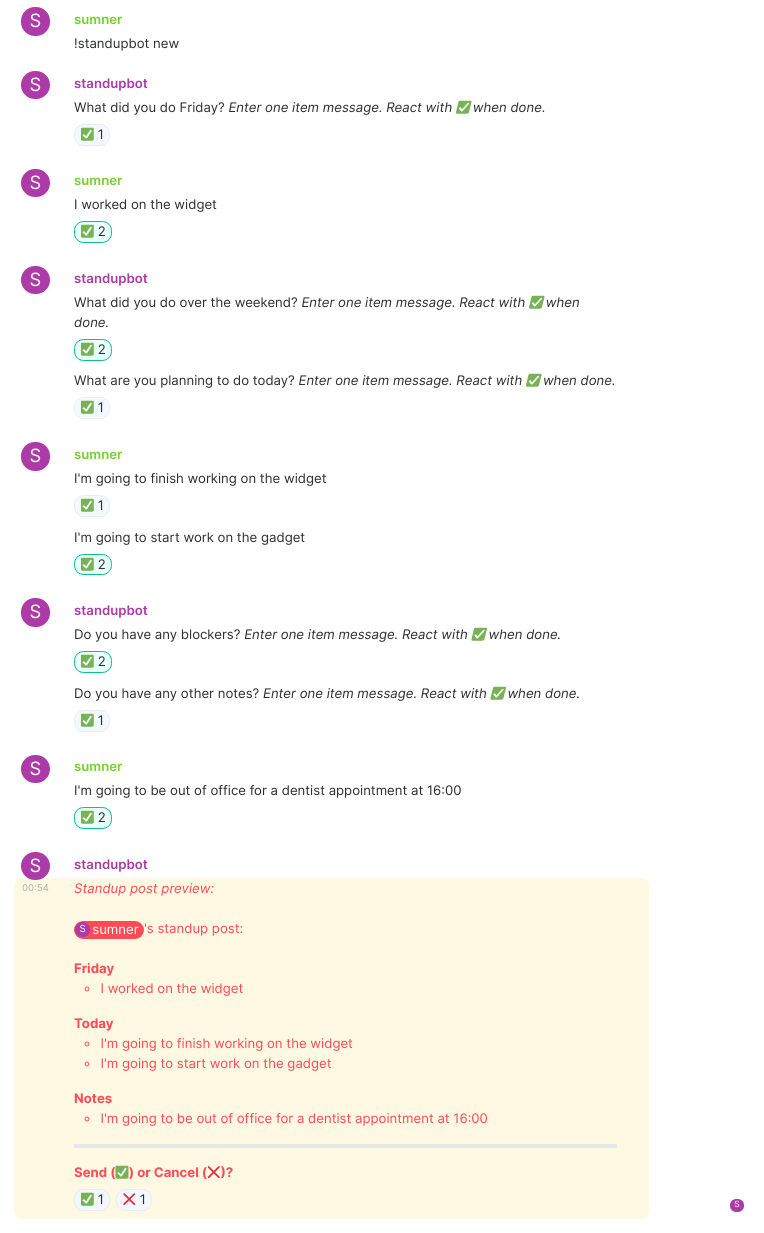 You can find the source code here: https://sr.ht/~sumner/standupbot/

Are you in Berlin 🐻🇩🇪? Why not join us on Tuesday evening at 7:30 PM for a beer or two while chatting about Matrix development and hosting. We're going to meet at Schoenbrunn. This is a small 3G (self-tests are ok) event in an outdoor beer garden.

I am super happy to finally give you another update on TheBoard, due to holidays during the last weeks I had less time to work on TheBoard. But now there still accumulated enough changes for a little Update:

I experimented what technologies I could use for the still required GUI elements. A new User List was implemented using Vue.js. Vue seemed to be a little overkill for the kind of GUI required in the case of TheBoard. So I re-implemented the user list with react-no-js. I am happy with react-no-js and it is used for a user list plus a tool settings menu on the right hand side of the canvas.

The tool panel in particular opens up a lot of possibilities. The eraser already makes use of it by giving the option to only delete specific item types (Image, stroke or text). This can be very handy if you want to delete strokes drawn on top of an image without deleting the image as well. What can be deleted is highlighted by a new filter system which allows to make any modification to objects selected by a filter function (see the attached image) 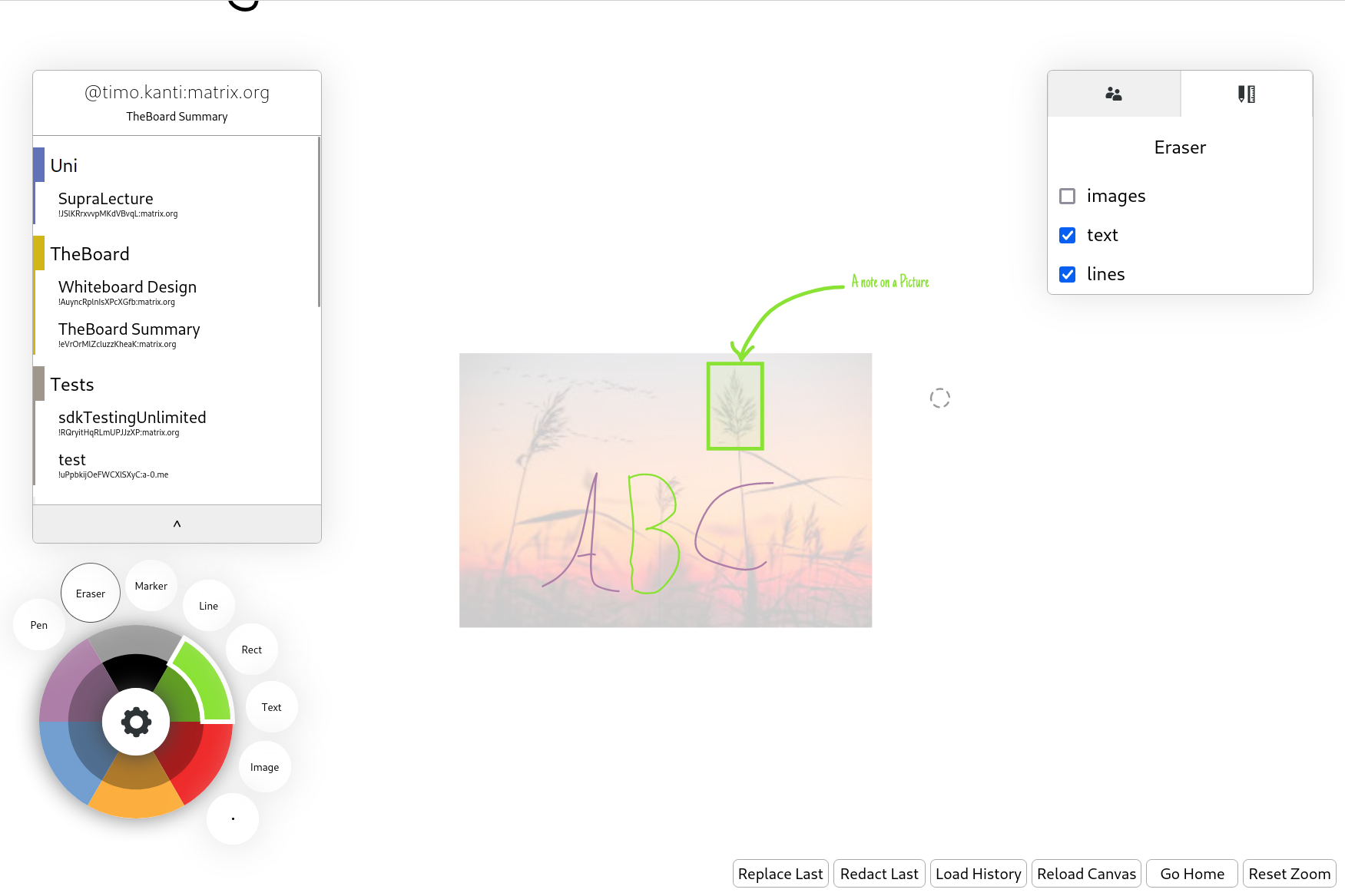 The Board is very exciting! I could see in the planned use cases that Timo already intends to make a widget out of it. It would be very useful for real-time collaboration, but that's not all! When asked if a standalone app will come, Timo confirmed:

Indeed. I wasn't thinking about a builtin home-server yet. But a standalone app is still planned because I want the app to be able to manage different boards. Therefore I need to be able to control room creation and listing rooms. It should basically feel like onenote if you intend to use it like that.

@s7evink The game is called AAGRINDER, hosted at aagrinder.xyz, the code is here, the bridge implementation is here, wiki is here. The game is a text-based sandbox multiplayer browser game that I (Maze) have been building for the past 3 years. Built from nothing, no game engine. It generates an infinite procedural terrain to venture in. The integrated chatbox is nothing special but it's really nice to have it bridged to Matrix now, it's less lonely when playing alone. The appservice bridge creates users matching player name and color. Display names from Matrix are presented in the same color as in Element.

Hopefully you're able to extract some useful information out of this ^^

I love the retro vibe of the game, it's really cool!

Third Room is an experimental metaverse client I've been working on for the past couple weeks. It combines three.js and Matrix to create 3D voice chat rooms where you embody an avatar.

There's a lot more info in my talk from last night at the Open Metaverse Interoperability Demo Night (my talk starts at 37:43)

If you want to chat more about Third Room, you can join our Matrix room: #thirdroom-dev:matrix.org The future is now, I'm really thrilled about Third Room!

Beeper mentioned they have several positions open, and Element is also talents hungry. I’m particularly ecstatic to see that developing skills around Matrix can get people jobs. Of course I encourage strongly people to experiment with the protocol and use it in all sorts of crazy ways!