Hi folks, I've been let loose on more spec things: This time I'm looking at synthetic events. The goal with this proposal is to give appservices more visibility over the innards and actions of a homeserver. When a user registers, we want an appservice to know (perhaps to send them a little greeting, or to provision some resources) or perhaps you want to clear up bridge resources when the user deactivates their account.

The hope with this proposal is that it's going to set the foundations for services to be able to hook into and provide richer functionality based upon user actions outside of rooms. It might sound a little dry right now, but eventually I'm hoping this can be extended in lots of ways and potentially do away with per-implementation modules, instead writing services that work with all homeservers.

Please give the proposal some love/feedback :)

When asked if that was a specification change he drafted because of limitations faced when trying to implement a bridge, he said:

Yeah, so it's something I've been plotting for a while, but internally we wanted the ability to "act" based upon signups to a homeserver i.e. sending a welcome. In the past this has been implemented client-side in Element, but that has obvious caveats.

The traditional response has usually been to write a Synapse module, but I wanted to do something that could be used on other homeserver implementations and also not have to have it co-located with the homeserver, so the natural home for this kind of logic was appservices.

There are other things there too like logouts / deactivations which are good for erasing data on a service too. Generally I'm hoping it can be extended further once it's stable, for other use cases too

MSC3401 (Native Group Voip Signalling) has been receiving positive feedback over the course of the week. The MSC spells out how one would go about implementing native, decentralised group voice and video calls over Matrix without the need for a third-party service. This is the next step forward after the full-mesh group signalling work, as demoed in previous editions of TWIM, lands. Quite exciting stuff!

Otherwise there was another Spec Core Team retro this week. Discussion focused mainly on how to handle event types that not every implementation using Matrix may need (think pinned messages and how that might not be very useful for IoT networks...). Watch this space!

The random spec of the week is... MSC2666: Get rooms in common with another user!

This is actually already implemented and enabled by default in Synapse, believe it or not. But no clients have support for it yet (there is an outstanding matrix-react-sdk PR...).

This is a pretty cool feature in my opinion, any client want to be the first? 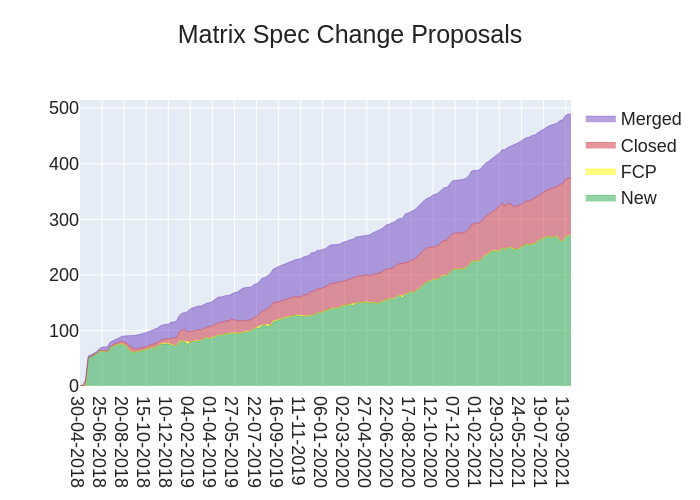 MSC3401 looks like there's a lot of work going on on the native VoIP side. I can't wait to see what the future holds!

This week we released Synapse 1.43! This mainly contains internal changes, including those in preparation for Spaces leaving beta, but it's worth calling out that this version of Synapse now uses the MSC3244: room version capabilities API to ask clients to prefer room version 9 when creating restricted rooms.

Support for room version 9 was introduced in Synapse 1.42, so we'd strongly encourage administrators to upgrade.

Perhaps more notably for Synapse developers, we've spent quite a lot of time over the past few weeks improving the SyTest suite of integration tests. Several of the tests had race conditions which would cause them to occasionally fail when testing a multi-worker deployment of Synapse. These flakey tests have plagued our continuous integration pipelines, and are finally being fixed.

The long term plan is still to transition to Complement (written in Go) and away from SyTest (written in Perl), but we still need to ensure that SyTest is reliable in the meantime.

This week - like all weeks - brings some Helm Chart updates, with matrix-synapse being updated to 1.43.0.

The chart store has been redone to track multiple versions now too, so older versions of the charts will stick around for a while.

Hi there, Didn't post updates about the etke.cc service for a while. If somebody not familiar - we setup and maintain matrix servers (based on awesome spantaleev/matrix-docker-ansible-deploy)... and setup VPN... and DNS recursive resolver, and... AND!!!! Provide hosting, yes. So, starting today that's available for everyone (we offer it for some time in "well, you know, we don't provide hosting, but if you want it so hard..." way and it works good)

Even with that update (literally the most requested thing, was in every third order we got), provided hosting considered as your own server, the only difference that you don't pay hosting provider directly, but through us. So, you get root access to the server and we treat it as any other customer's infrastructure

I've also started releasing source archives as GitHub releases for distribution packagers and the project is published to PyPI to have more installation options.

matrix-docker-ansible-deploy has also been updated with the new release, thanks again Slavi 🍻!

What improvements did hifi bring to the formatting you may ask? I asked, and hifi answered:

This release features a lot of bug fixes and the new multi account feature which also include account bundles. Multiple accounts and voice messages on iOS, in a single release, no less! Fluffychat is not only cute but also powerful.

After 2+ years of development, Quaternion makes a leap from 0.0.9.4 all the way to 0.0.95. The release notes list some key improvements: reactions, Markdown, revamped timeline, user profile dialog and a lot of other things. It’s the same small and fast client that blends nicely into your desktop environment, it just got much better. Go and get it!

Congrats on the release, kitsune!

Multiple (0.2.12 & 0.2.13) bugfix releases this week for timeline and sync issues, and also some minor UX issues. Get them while they are hot!

synadm is the Synapse admin CLI

A little synadm release went out this week. Thanks a lot to @govynnus for contributing "Registration token management", it's available as a new subcommand regtok. Also some tiny improvements here and there were brought in to make admin experience even more convenient.

Have a look at the release notes: https://github.com/JOJ0/synadm/releases

Those are the same registration tokens GSoC intern Callum implemented and told us about in this Matrix Live episode.

The Ansible Community has recently adopted Matrix as an official chat platform and this is our first Matrix-powered conference. Feedback welcome! You will need a Matrix account to participate in the conversations. For more information, please see Communication - Real-time chat and the Ansible Community Matrix FAQ.

Join the Ansible Social Room anytime before or during the event and say hi! During the presentations, join the Main Conference Room to participate in the discussions. We will also have a session on How we are rolling out Matrix to the Ansible Community.

If you're interested, check out the details and register on Eventbrite. We look forward to seeing you on Matrix at the Ansible Contributor Summit!

there's a mix of stuff going on to try out, we have hack sessions on Tues that may use the embedded Jitsi etc, and talks on Friday that will be more presenter/spectator 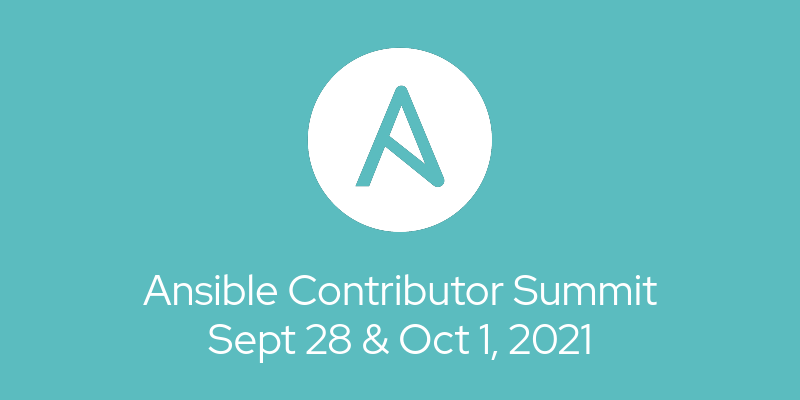 It's exciting to see an organisation holding an online conference on Matrix!

I will blog about the setup as a post mortem

We count on that, others are interested in this kind of set-up too!