This week, I had the great pleasure of chatting with a lovely bunch from Element about Spaces. This feature just got out of beta and they tell us all about it.

Hello TWIM, it's me, not-anoa, again with your weekly spec update. I unfortunately didn't get a chance to figure out how to run the tooling which generates fancy graphs, but it looks like you'll have a more qualified person next week 😇

This week we saw a couple new MSCs:

We've also been making progress on trying to get the spec release out by formally specifying all the new global version numbering and new endpoint versioning (see this and this), and have been experimenting with how room versions are represented by the spec.

From page 6 of the open MSCs there's MSC2723. The MSC is relatively small, but solves a fairly important problem with forwarded messages in Matrix: where were they forwarded from? From a glance, it has minor technical feedback and could do with an implementation (psst: client authors, this should be easy and fit well into a North American Long Weekend project 😇).

That's all I have for you today, but if I've missed something: sorry, and you should be in capable hands next week.

This week I have completely rewritten the Pinecone router with the aim of improving code quality and boosting performance. It now uses significantly less resources, making it much easier to simulate larger networks and using less battery power on mobile devices.

While there is still some work to be done to ensure the Pinecone network gracefully handles large-scale mobility events, protocol development is slowly progressing and we will soon be looking at how Matrix federation can be made more efficient by using routing intelligence from the overlay network.

If you have a passion for routing protocols and/or peer-to-peer systems, we're looking to hire engineers to work in the P2P Matrix space — get in touch by emailing your resume to us!

We also have our very own P2P Matrix room where you can follow along with the latest discussions and also occasionally pick up experimental iOS and Android builds of Element with an embedded P2P-enabled Dendrite homeserver.

We released Synapse 1.44 this week! The release was mainly focused on bug fixes and internal cleanups. In particular, we've made significant strides toward enforcing static type annotations across several more Synapse modules, we continue to remove "magic" code from our configuration handler, and we've landed significant refactors to both the user directory and federated event authentication. These changes pay off significant technical debt, reduce Synapse's maintenance cost, and ease future bug fixes.

But that's not all. This release also includes performance improvements around JSON serialization, new capabilities for extension modules, and better metrics around cache evictions. See the announcement for more details.

And for the regularly scheduled Helm Chart update this week; matrix-synapse has been updated to 1.44.0

Hi! Rocket.chat is working on a bridge with Matrix !!!! So nice 😊

Hello one and all! We've got a minor-yet-MAJOR release candidate of the IRC bridge up for grabs. https://github.com/matrix-org/matrix-appservice-irc/releases/tag/0.32.0-rc1 is now based upon the 3.X matrix-appservice-bridge library, and so all the innards have been replaced with matrix-bot-sdk.

Please try it out, and the full release should be out next week.

The first maintenance release of Quaternion 0.0.95 is here, plugging more HTML injections (quite limited this time), with tweaks in positioning of the timeline to really return to the message you last read before closing the room, colourful display names in the timeline and not just in the user list, and one particular crash fix for a case when you made a typo in your password but then did it right - only to see Quaternion falling down to pieces. The release notes, together with self-contained binaries, are in a usual place, the Flathub repo has a new Flatpak too - just go and update!

Cinny v1.3.2 got released this week. It fixes unwanted "Password don't match" error on register page along with small improvements in Public room modal and message input (Thanks to Empty2k12). We also released v1.3.1 last week which fixed unnecessary CPU usages on idle and infinite spinner after login.

Check it out at: https://cinny.in

Both the Web/Desktop and the Android variant have received a couple of new features during the last weeks, so it's time again to share some of the highlights with you!

The Web/Desktop variant has received plenty of love for the last few weeks, so best to list some of the bigger changes:

The following screenshot showcases the compact room list and user name color mode based on PL: 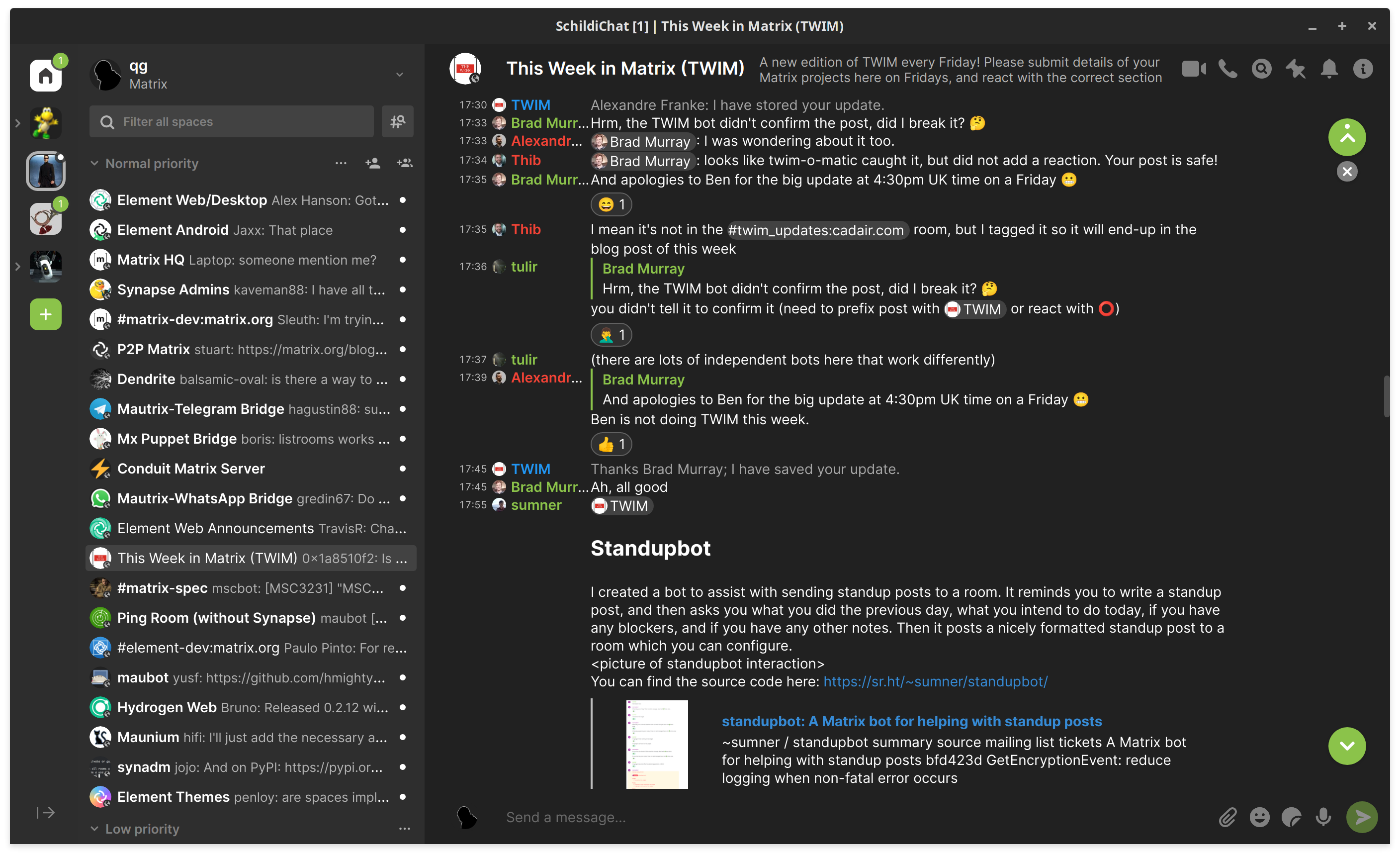 So take that, IRC style lovers! 😁

We added support for MSC2654 for server-reported unread counts. This means that we can now display the number of unread messages even for muted chats, if your homeserver supports it (synapse does)!

Feel free to join the SchildiChat space (#schildichat:matrix.org), and visit our discussion rooms!

Hello! Halcyon is a Matrix bot library created with the intention of being easy to install and use. My goal is to lower the barrier of entry currently required to write and maintain a bot. I do not intend you to need a database, or have to juggle encryption keys.

With the initial release of the library we currently have:

Hi! Just a quick one: this week saw the first stable release of jOlm - Olm bindings for Java

This week has seen two maintenance releases of libQuotient - just after 0.6.10 went out, fixing an issue with invites not showing up, another issue with URLs that have unescaped double-hashes (coincidentally, matrix.to URLs to some IRC channels are exactly those). Those URLs are not quite following the RFC but are accepted widely enough to warrant a fix, and a new release. Get 0.6.11 from here (or better, just checkout the respective Git tag).

A few weeks ago, I posted about the standupbot that I wrote to help assist with creating and sending standup posts to a room. I'm excited to announce today that you can choose to interact with the standupbot using threads! Instead of asking you about each part of the standup post individually, it creates threads for each of the parts that you can fill in. Your replies get added to the standup post like before, but it's a bit more interactive of a process. Here's a picture of how it looks (ignore all the display bugs due to Element). 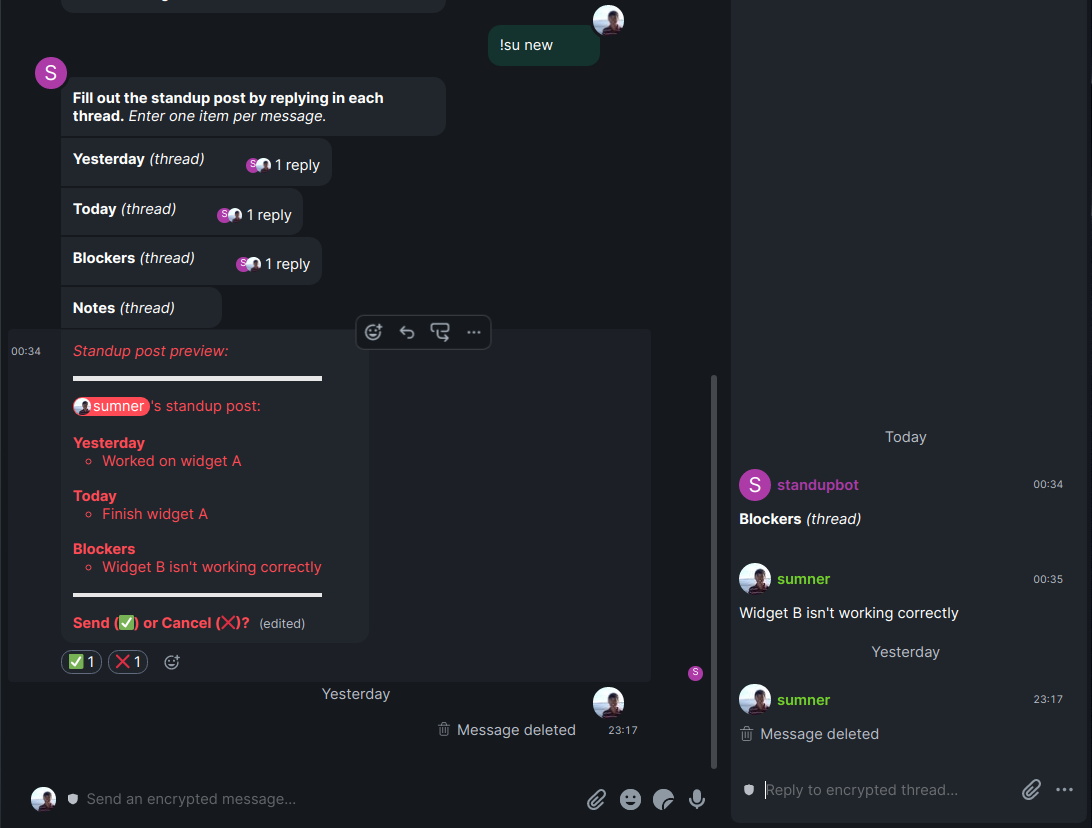 If you are interested in learning more, the source code is here: https://sr.ht/~sumner/standupbot and you can join the development matrix room #standupbot-dev:sumnerevans.com

Running conferences on Matrix: A post-mortem of Ansible Contributor Summit

Following the Matrix-powered Ansible conference featured in TWIM-2, @gwmngilfen:ansible.im has written up some thoughts on how it was structured, how it went, and why he thinks it worked (spoiler! It worked quite well!).

An (unofficial) Matrix server for the Newgrounds community.

Since I was pressed for time last week, I didn't go much in depth on how this server works. Here is a brief overview of its components:

Point 2 also means that anyone on the Matrix network can make a room that's restricted to Newgrounds Supporters. Just make sure the bot has a high enough power level to kick users!

(PS: The "W" stands for "double"--because of its job of "copying" rooms into Matrix.)

This week's space is: #retro:nil.im