Friday already? Did this week already happen? It looked like the spacetime continuum was broken and we didn't know who did it. We needed witnesses to solve the case: did things really happen this week? And the witnesses showed up! A huge thanks to everyone in the Matrix community who reported their progress, and to everyone currently working on making awesome projects around Matrix!

The case is closed: the week has not been stolen from us. Time appears to have wings, and flies faster than we had anticipated.

A very very dense and exciting wrap up of what's happening these days in the Matrix space by Matrix Foundation co-founders Matthew & Amandine! Matrix is stepping up a gear with blazing fast Sync v3, Threading Support, VoIP, VR, a new release of the Spec, always more monthly active users, a full security audit and progress on P2P.

This week we finally, finally had one of the aggregation-related MSCs, MSC2674 (event relationships) enter final comment period! This MSC, along with several others, document the stuff that powers message edit, reactions, the upcoming threading and polls MSCs, and much more! So it's really great to see the MSCs start to actually land.

Speaking of threading MSC3440 has had a good amount of review from the Spec Core Team last week. Threading in Matrix has been a long awaited feature for chat applications - as well as helping extend the flexibility of Matrix as a data structure even further. The MSC relies on both MSC2674 and MSC2675 (or a modified version of it), so the latter will be an area of focus for review for next week.

It seems that the recent Matrix v1.1 has drummed up some more community support for spec PRs. Thank you to everyone who's sent in clarifications, changes and even typo fixes. In particular, @ankur12-1610 for fixes to the OpenAPI fields, and for typo corrections in the spec copy, and @Dominaezzz for helping review them. Thank you both!

The random spec of the week is... MSC2867: Marking rooms as unread!

This is definitely a feature that I would love to have for chat. Note that this MSC proposes marking a room as unread, rather than a specific point in the room's timeline. This is intentional as noted in the document, as the latter is more complicated, as it intersects with sending out read receipts to other users. 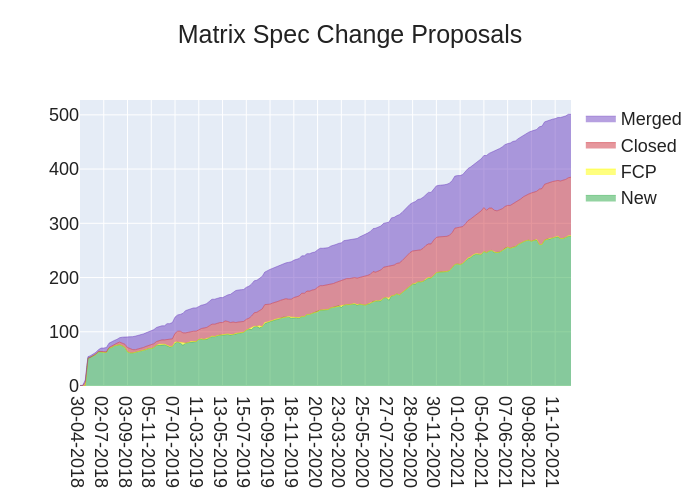 Note: we plan to release a security release, Synapse 1.47.1 on the coming Tuesday, 23rd of November; see the predisclosure.

We released Synapse 1.47.0 after squashing a couple of problems related to database migrations remaining in 1.47.0rc2. Briefly, this release includes

The blog post has a better summary, and GitHub has the full gory details.

We also released Sydent 2.5.1, a minor release which improves the way we handle and log various error cases.

Thank you as ever to our community contributors, and everyone out there who's using Synapse to communicate!

When we release the fix, the changes will be publicly known and bad actors will have the ability to deduce the vulnerability. Most servers don't run release candidates, so releasing the fix in an RC will mean there's a larger window for an attacker to exploit the problem. Internally, there will be an RC deployed to test homeservers and eventually matrix.org. This means we'll be able to confidently recommend the upgrade to server administrators.

Keep your servers up to date, and your users safe, administrators!

Would you believe it? This week has also seen updates to my Helm Charts, with matrix-synapse having been updated to 1.47.0

Plumb moderation! If the bridge bot has ops on IRC it will do its best to map kicks and bans (regarding IRC users) from Matrix. This definitely isn't perfect and is meant as a convenience.

Topic synchronization is now configurable for plumbs as well to make it possible to share the same topic between an IRC channel and a plumbed Matrix room. Default is still off and it requires the bridge bot to have enough PL to work.

The separator for IRC ghosts can now be changed to forward slash (/) from the default underscore (_). This happens by modifying the regex in the registration file. Only do this for new installations and it will cause all IRC users to duplicate in rooms who you can't remove and probably other bad side effects as well. The default may be changed in the future.

There were lots of refactoring issues so I hope I fixed all of them 🙈.

Best effort your fix from GitHub, PyPI or matrix-docker-ansible-deploy!

Yet another week, yet another great update on Heisenbridge. At this rate Heisenbridge will reach perfection and hifi will run out of things to report!

So, Nheko has a small little release this morning! Okay, that's a lie, it was actually pretty big! You can find the full changelog and some of our binaries here: https://github.com/Nheko-Reborn/nheko/releases/tag/v0.9.0

As always, thank you everyone, who contributed. There were over 30 authors this release! If you haven't tried Nheko in a while, give it a whirl. Lots of stuff changed, some things might not even have been mentioned in TWIM! I put the first few lines of the changelog below for your convenience:

As always, come check us out and chat about Nheko in #nheko:nheko.im ♥

Nad updates us with

The time command, but it sends the output to a Matrix room

after the Miounne update posted a minute ago here is another one, and it's about time: Time To Matrix (ttm) got v1.4.0 release!

Time To Matrix is a time-like command that will send end of an arbitrary command output and some other info (like exit status) to matrix room.

Go check out the source code and say hello in #ttm:etke.cc

simplematrixbotlib is an easy to use bot library for the Matrix ecosystem written in Python and based on matrix-nio. Version 2.3.0 adds support for additional configuration via config files and other methods. Currently, there is only one setting that can be changed, however many existing and future features will be able to be enabled or disabled via this config.

An example of a toml config file is shown below.

The backoffice of etke.cc service

Go check out the source code and say hello in #miounne:etke.cc

The moderation bot for Matrix

That's one feature I've wanted for a while, and it's going to make moderation a lot easier! Thanks Mjolnir teams for keeping us safe!

Today I want to showcase you MinesTRIX. MinesTRIX is a decentralized social media based on matrix. The goal is to create a privacy respectful social media using the power of matrix while trying to be as simple as possible. 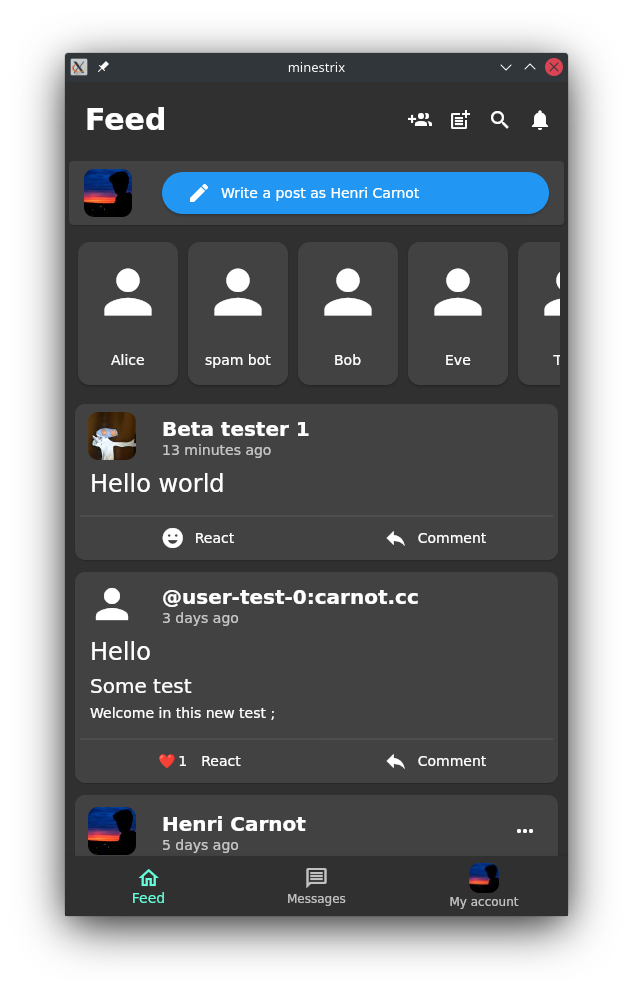 That's a fascinating client, it looks absolutely fantastic! It reminds me a little of Cerrulean. Good job Henri!

There was the "Sign in with Matrix" project recently

An important note on the interesting projects using Matrix for the login: those are community projects, and there are MSCs in the works to "do it right" at the Spec level!

As Matthew Hodgson reported in a comment on Hacker News :

The direction we're headed in the Matrix spec core team is instead towards replacing Matrix's current auth mechanisms with normal Open ID Connect (rather than wrapping our own OIDC-like thing, as we do today) - as per https://github.com/sandhose/matrix-doc/blob/msc/sandhose/oauth2-profile/proposals/2964-oauth2-profile.md The common login flow would then be for users to be authed by their server using a trusted OIDC identity provider, rather than ever trusting arbitrary clients with their credentials.

I have compiled a list of public homeservers available for registration, since previous such efforts to make these homeservers more discoverable fell through. This list serves as a sanitized version of the asra.gr list, with only homeservers intended for public consumption included. It is a static list and does not include pings, but rather than focusing on the technical aspect, my list has an emphasis on the written rules of a homeserver, which I believe to play a larger role in the Matrix experience. Hope this can spark other efforts in maintaining a better list!

That's one very useful list of hand curated servers! The transparency about the inclusion criteria is very much appreciated. Good job!

This week's room is: #travel:hacklab.fi

"Discussion about destinations, culture, hotels, flights etc.. English only, be nice to each other."