MSC2675 (serverside aggregations) is getting lots of updates from Bruno in order to align the proposal with what is currently implemented in the wild (as it's easier to iterate on incremental improvements from a starting point grounded in reality). This MSC is a bit of a special case though, as it was implemented with stable prefixes before the MSC landed (in the before times...).

Regardless, thank you very much to Bruno for going through and finally untangling and help land aggregations in the spec! This MSC is one of four which describe how aggregations should work in Matrix, and it's great to see them finally being properly spec'd, especially as further features start to be built on top of them (such as threading!).

And finally, a further thank you to community members @ankur12-1610, @Dominaezzz for an OpenAPI schema fix!

The random spec of the week is... MSC3395: Synthetic appservice events!

This proposal aims to allow appservices to get ever greater visibility into what is happening on the homeserver, while still maintaining full process separation.

A lot of the time solutions to complex problems require knowing when a user has registered or logged in, with what name/3pids etc, when users change their emails, etc. Hooking into these non-room-based actions can help with developing useful features. Maybe you want an appservice that plays a sound effect whenever a user signs up to your homeserver!

These days, that is often achieved by homeserver implementation-specific solutions, such as modules in Synapse. Being able to notify of these events using a standard API shape would be hugely beneficial to generalisation of projects.

So give the proposal a look over and review if that interests you! 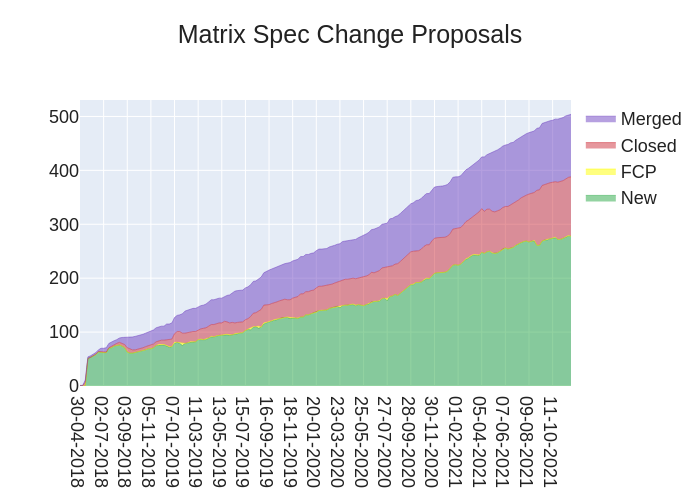 Some exciting MSCs this week, I've been waiting for server-side aggregations for long!

As predicted last week, we released Synapse 1.47.1 on Tuesday. This is a security release which fixes an issue with Synapse's built-in media repository. Admins are strongly encouraged to upgrade.

Otherwise, relatively slow week: a handful of of the team have been away (Happy Thanksgiving, Americans!), but we did release Synapse 1.48.0rc1. Most importantly, this release candidate includes changes to improve the efficiency of large background updates from past releases, which should significantly reduce database load when upgrading. It also adds support for the /v3 APIs defined in version 1.1 of the Matrix specification.

We'll talk more about 1.48 when it's formally released next week, but as always, we appreciate folks trying out the release candidates and letting us know how they behave.

Administrators, keep your users safe: update as soon as you can!

A bit of an earlier update this week, but I wanted to make sure to note that my Hem Charts have been updated to matrix-synapse 1.47.1 for the security fix - and element-web has also been bumped to 1.9.5

mautrix-googlechat has seen lots of improvements over the past few days. New features include:

(edits and deletions are only available on Google Workspace accounts, not normal accounts. I have no idea why they did that, but that's just how Google Chat works 🤷)

There's still a bug where it sometimes silently stops receiving messages, which I'm currently trying to solve (or work around). After that I'll make a v0.3.0 release. Backfilling history may also happen in the near future

An add-on for the matrix-appservice-webhooks bridge. Webhooks are essentially web interfaces for applications to "push" data to. The bridge can receive messages in a certain format, which is nice if the notifying app can be configured. Often it cannot.

Do you like to receive notifications in matrix? Matrix Webhook Receiver (MWR) is an add-on for the matrix-appservice-webhooks bridge. Webhooks are essentially web interfaces for applications to "push" data to. The bridge can receive messages in a certain format, which is nice if the notifying app can be configured. Often it cannot.

This is where MWR comes in: It can receive any (JSON) content, optionally reformat it nicely (customizable!), and forward it to the webhooks bridge which will post it to a room for you. If you are running any software service, there is a good chance it can notify you via webhooks!

Right now, several example configurations exist, ready for you to use:

For example, here is the GitHub webhook as seen in #matrix-webhook-receiver:matrix.org:

It is also easy to use to send messages from the commandline with standard tools (curl), e.g. for your cron jobs! See the README for an example.

Some other webhook matrix things exist, but often require

What a massive update! At this rate I won't need to leave my Matrix client for anything!

Hey folks! Some exciting new news on the bridge front: I've renamed matrix-github to matrix-hookshot to better reflect it's not-just-GitHub-ness. That's not all though, as there are new features too:

We're not quite ready for a 0.2.0 release, but please check us out at https://github.com/Half-Shot/matrix-hookshot.

An interesting update, and Half-Shot even demoes it in today's Matrix Live!

After the 0.9.0 release last week, we have of course been busy fixing all the bugs different people reported. Messing around with the sticker pack editor and then leaving room should not make Nheko crash anymore. The problems where the flatpak has issues starting on Gnome systems are still under investigation. We thought we had a solution, but that seems to have broken other stuff! 💥

Apart from that we have been doing some after release party cleanup. Apart from some refactorings, you can now filter your rooms on whether they are a direct chat or not in the sidebar. This is in addition to the filters we already had for favourites, spaces and your other personal tags. User colors should also now be much less biased towards blue and jdenticons should have more variance. Expect the next release to be a much more colorful experience!

Speaking of colors, Twily made this awesome ZX Spectrum inspired logo after we changed our Gitlab bot to be more colorful! Check it out: 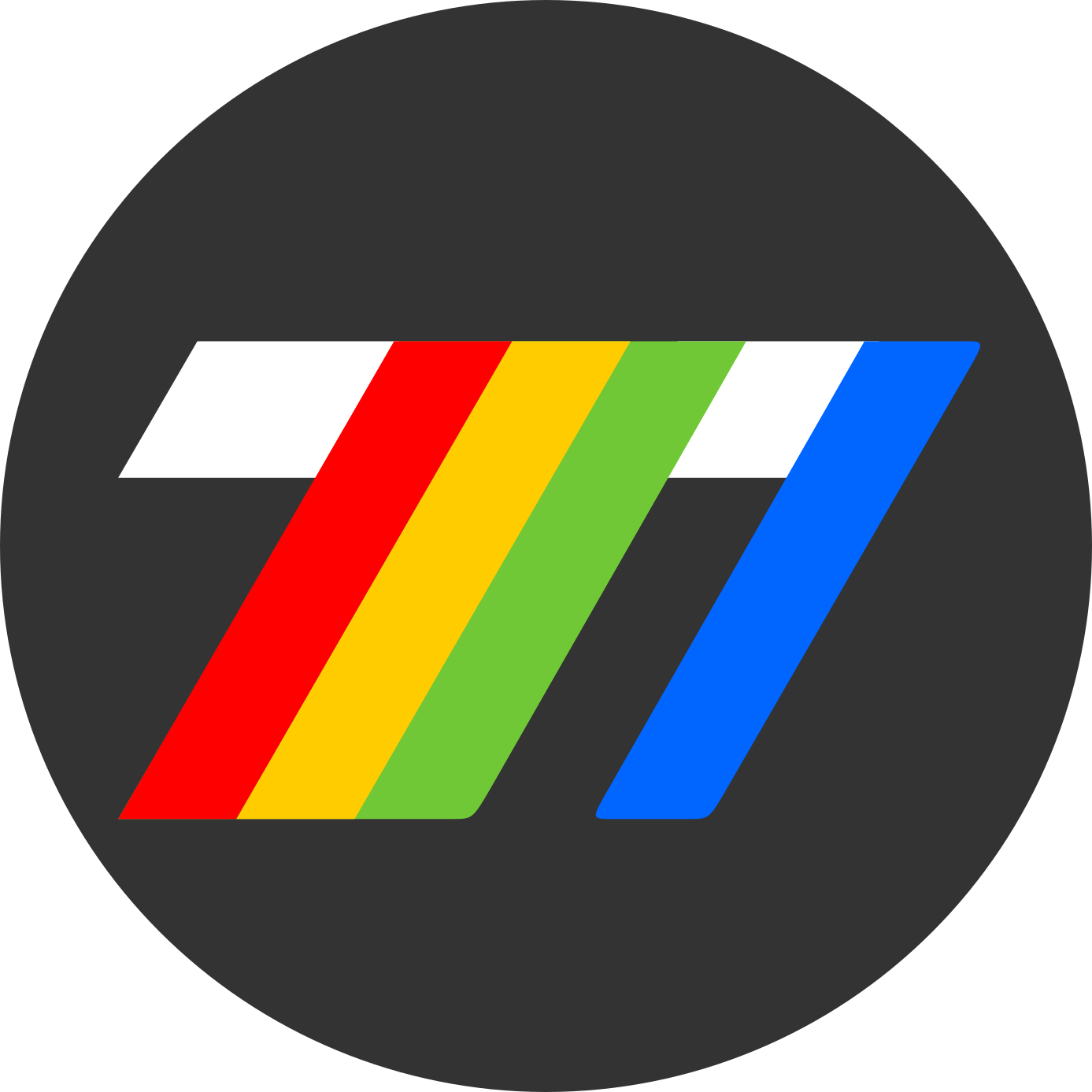 Gorgeous, I love it!

We're still distracted with SDK work and other things less visible for users, but this week we've also released 0.2.22 that fixes login on Element One (and other servers using SSO login and not yet supporting the experimental dehydrated devices).

simplematrixbotlib is an easy to use bot library for the Matrix ecosystem written in Python and based on matrix-nio. Version 2.4.0 provides several new features and a fix.

A thank you to HarHarLinks for their contributions to version 2.4.0!

This week saw three releases of jOlm which fix a native memory management issue, an Olm API (buffer) issue and add a few other improvements. Everyone is strongly encouraged to update to the latest release.

The only Java bindings of Olm to my knowledge, that's some very valuable work here!

My personal favorites of the new features are:

synadm is very useful as a homeserver administrator. Thanks JOJ0

Also, I finally took a day to figure out Sphinx/autodoc and made some decent-looking autogenerated docs for mautrix-python. I'll probably extend that to generate maubot-specific API references too eventually.

Quick update on MinesTRIX (a privacy focused social media based on MATRIX). This week was focused on performance and stability.

Come chat with us : #minestrix:carnot.cc 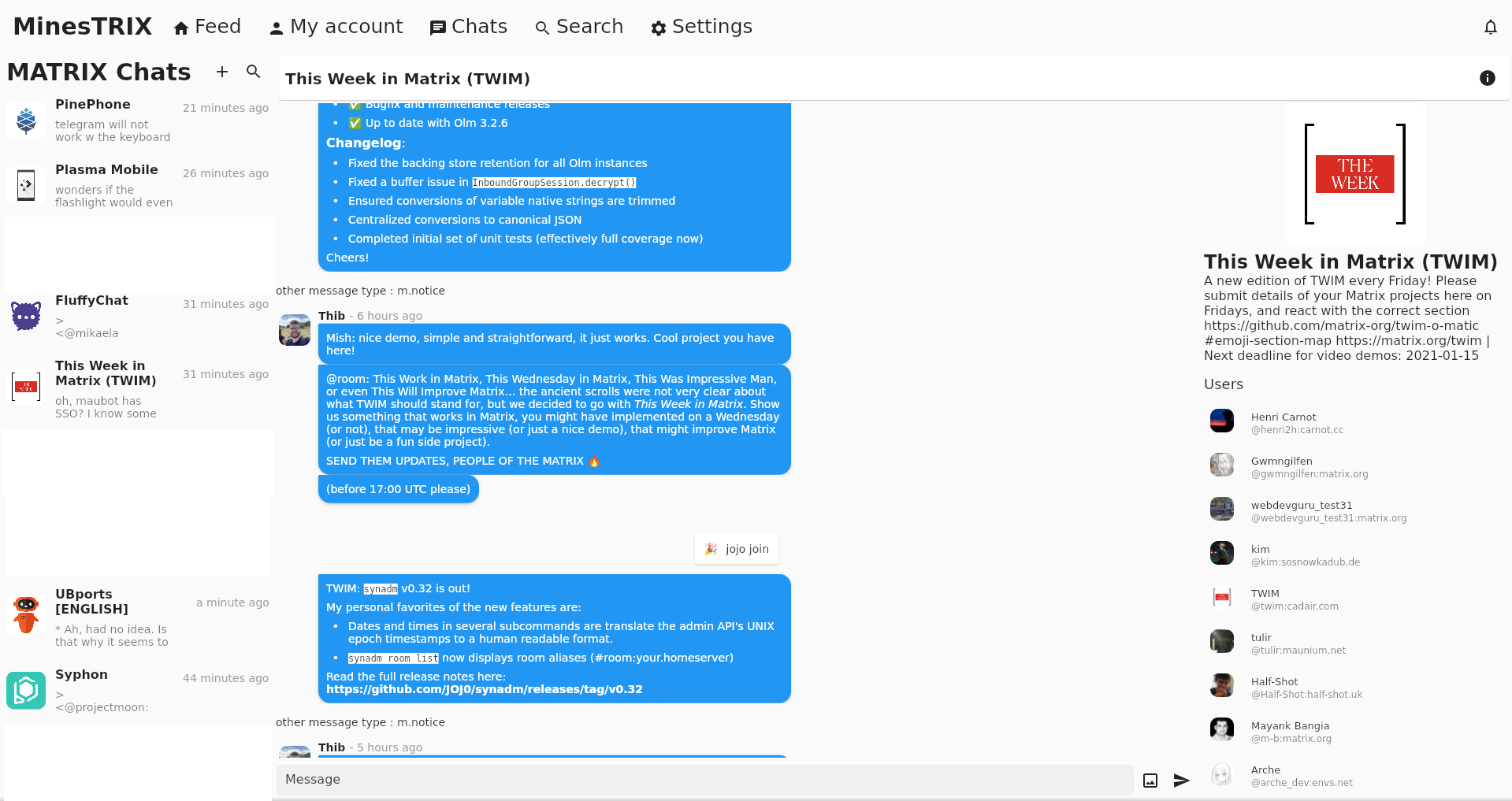 That's one exciting project, I can't wait to see how far it's going!

As last week, a note to keep in mind that this is a community project and that there is a MSC to make Matrix more OAuth2 friendly. More on that very soon!

Can be installed using NodeJS or Docker

Today is a good day for those calling me a spy, someone not wanting to care about privacy and for those who did publicly harass me for server_stats.

People using the API likely already noticed it wasn't reachable for a while. Effective immediately I am currently leaving all rooms the bot is part of. This will take days or even months considering this are 6397 rooms at the time of writing. I am not going into the motives of why I am shutting it down. It comes down to personal reasons.

There won't be any dump of the data. The source will be kept public. Note though if anyone ever tries to run it that you need about 600GB of space for synapse, a lot of CPU, a lot of RAM and plenty of workers as this can easily crash synapse.

Server_Stats was an incredibly useful project. It pains me a lot to see it go, but it pains me even further that its author got harassed. This is not an acceptable behaviour, and we are better than that as a community. Thanks for this incredible project MTRNord, it's been both exciting and useful.