This is the third in a series of three posts which discuss recent work to improve type annotations in Sydent, the reference Matrix Identity server. Last time we discussed the mechanics of how we added type coverage. Now I want to reflect on how well we did. What information and guarantees did we gain from mypy? How could we track our progress and measure the effect of our work? And lastly, what other tools are out there apart from mypy?

The best parts of --strict

While the primary goal was to improve Sydent's coverage and robustness, to some extent this was an experiment too. How much could we get out of typing and static analysis, if we really invested in thorough annotations? Sydent is a small project that would make for a good testbed! I decided my goal would be to get Sydent passing mypy under --strict mode. This is a command line option which turns on a number of extra checks (though not everything); it feels similar to passing -Wall -Wextra -Werror to gcc. It's a little extreme, but Sydent is a small project and this would be a good chance to see how hard it would be. In my view, the most useful options implied by strict mode were as follows.

By default, mypy will only analyze the implementation of functions that are annotated. On the one hand, without annotations for inputs and the return type, it's going to be hard for mypy to thoroughly check the soundness of your function. On the other, it can still do good work with the type information it has from other sources. Mypy can

The information is already available for free: we may as well try to use it to spot problems.

This flag forces you to fully annotate every function. There are less extreme versions available, e.g. --disallow-incomplete-defs; but I think this is a good option to ensure full coverage of your module. It means you can rely on mypy's error output as a to-do list.

One downside to this: sometimes I felt like I was writing obvious boilerplate annotations, e.g.

There was one particular example of this that crops up a lot. Mypy has a special exception for a class's __init__ and __init_subclass__ methods. If a return type annotation is missing, it will assume these functions return None instead of Any. (See here for its implementation.) This is normally compatible with --disallow-untyped-defs and --disallow-incomplete-defs, with one exception. If your __init__ function takes no arguments other than self, mypy won't consider it annotated, and you'll need to write -> None explicitly.

It's also worth mentioning --disallow-untyped-calls, which will cause an error if an annotated function calls an unannotated function. Again, it helps to ensure that mypy has a complete picture of the types in your function's implementation. It also helps to highlight dependencies—if you see errors from this, it might be more practical to annotate the functions and modules it's calling first.

If I've written a function and annotated it to return an int, mypy will rightly complain if its implementation actually goes on to return a str.

If mypy isn't sure what type I'm returning though, i.e. if I'm returning an expression of type Any, then by default mypy will trust that we've done the right thing.

Enabling --warn-return-any will disable this behaviour; to make this error pass we'll have to prove to mypy that i_promise_this_is_an_int() really is an int. Sometimes that will be the case, and an extra annotation will provide the necessary proof. At other times (like in this example), investigation will prove that there really is a bug!

This is a bit like a limited form of gcc's -Wtautological-compare. Mypy will report and reject equality tests between incompatible types. If mypy can spot that an equality is always False, there's a good chance of there being a bug in your program, or else an incorrect annotation.

I'm not sure how general this check is, since users can define their own types with their own rules for equality by overriding eq. Perhaps it only applies to built-in types?

It was important to have some way to numerically evaluate our efforts to improve type coverage. It's a fairly abstract piece of work: there's nothing user-visible about it, unless we happen to discover a bug and fix it.

The most obvious metric is the number of total errors reported by mypy. Before the recent sprint, we had roughly 600 errors total.

This is a decent way to measure your progress when working on a particular module or package, but it's not perfect, because the errors aren't independent. Fixing one could fix another ten or reveal another twenty—the numeric value can be erratic.

I found mypy's various reports to be a better approach here. There were three reports I found particularly useful.

This produces a main index page showing the "imprecision" of each module. At the bottom of the table is a total imprecision value across the entire project. 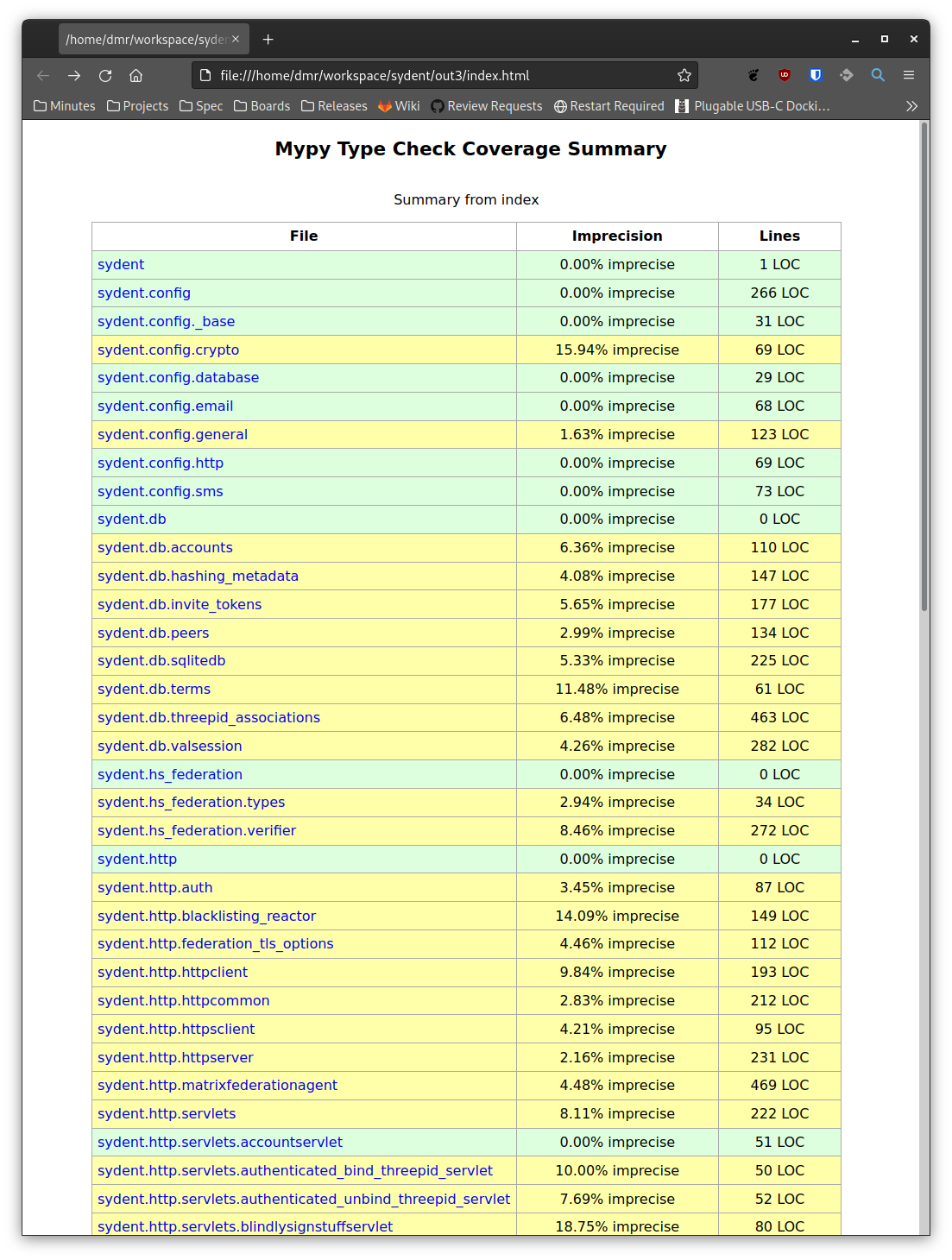 The precision for each module is broken down line-by-line and colour-coded accordingly, which is useful for getting an intuition for what makes a line imprecise. More on that shortly. 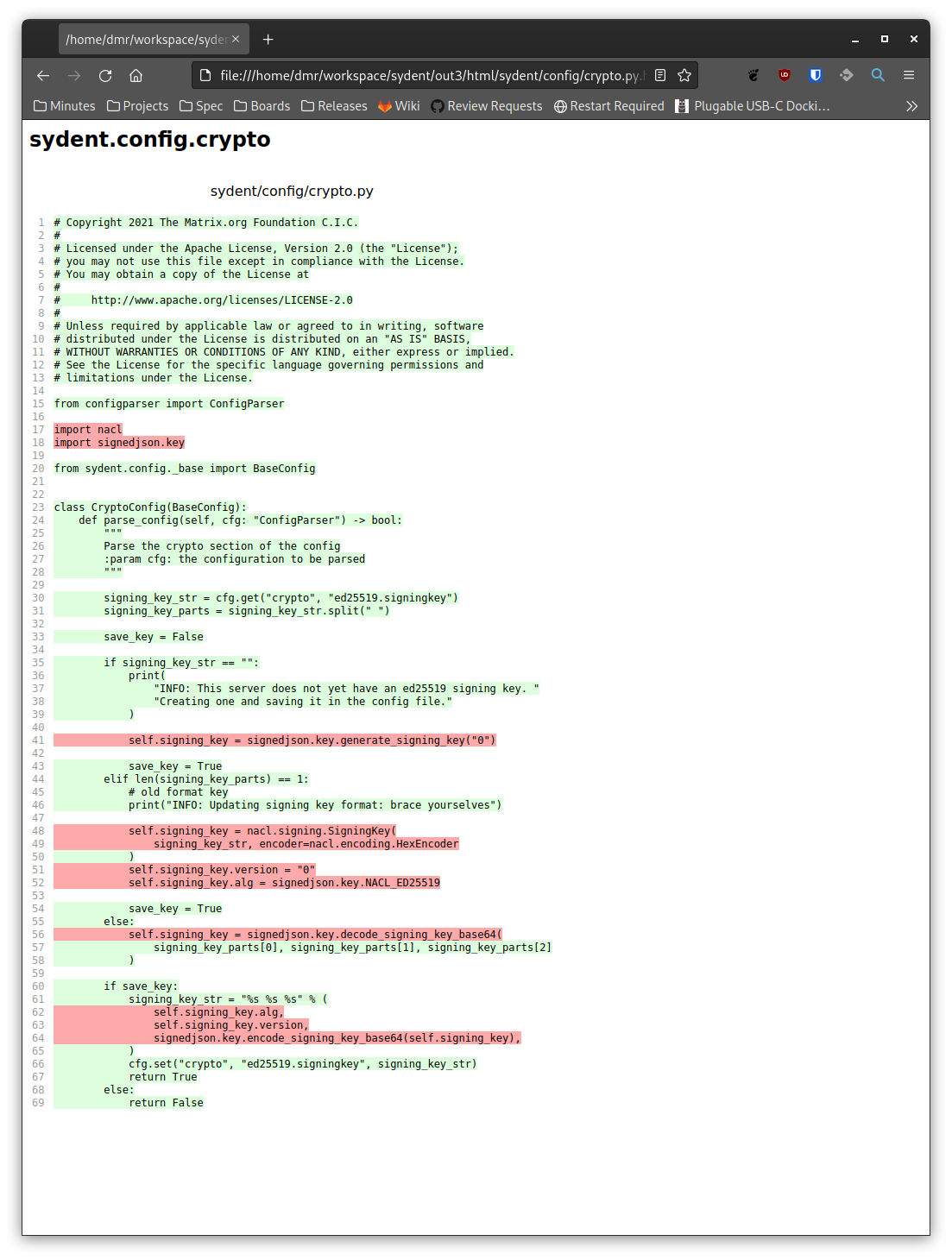 This reproduces the index page from the html report as a plain text file. It's slightly easier to parse—that's how I got the data for the precision line graphs in part one of this series. That was a quick and dirty hack, though; a proper analysis of precision probably ought to read from the json or xml output formats. Here's a truncated sample:

Selecting this option generate two reports: any-exprs.txt and types-of-anys.txt. The latter is interesting to understand where the Anys come from, but the former is more useful for quantifying the progress of typing. Another sample:

The breakdown in types-of-anys.txt has more gory detail. I found the "Unimported" column particularly interesting: it lets us see how exposed we are to a lack of typing in our dependencies.

The meaning of precision

There are two metrics I chose to focus on:

These are plotted in the graph at the top of this writeup. I could see that precision and the proportion of typed expressions were correlated, but I didn't understand how they differed. I couldn't see an explanation in the mypy docs, so I went digging into the mypy source code. My understanding is as follows.

The "imprecision" number reported by mypy counts the number of lines classified as IMPRECISE or ANY.

On balance, my preferred metric is the line-level (im)precision percentage. There wasn't much difference between the two in my experience, but the colour-coded visualisation in the HTML report is a neat feature to have. Maybe in the future there could be a version of the HTML report that colour-codes each expression?

It's worth highlighting the typeshed project, which maintains stubs for the standard library, plus popular third-party libraries. I submitted a PR to add a single type hint—it was a very pleasant experience! Microsoft has an incubator of sorts for stubs too.

After the sprint to improve coverage, I spent a short amount of time trying the alternative type checkers out there. Mypy isn't the only typechecker out there—other companies have built and open-sourced their own tools, with different strengths, weaknesses and goals. This is by no means an authoritative, exhaustive survey—just my quick notes.

PyCharm has its own means to typechecking code as you write it. It's definitely caught bugs before, and having the instant feedback as you type is really nice! I have seen it struggle with zope.interface and some uses of Generics though.

When annotations were first introduced, they were a generic means to associate Python objects with parts of a program. (It was only later that the community agreed that we really want to use them to annotate types). These annotations are available at runtime in the __annotations__ attribute. There's also a helper function in typing which will help resolve forward references.

All in all, in a two-week sprint we were able to get Sydent's mypy coverage from a precision of 83% up to 94%. Our work would have spotted the bytes-versus-strings bug; we understand why the missing await wasn't detected. We fixed other small bugs too as part of the process. As well as fix bugs, I've hopefully made the source code clearer for future readers (but that one is hard to quantify).

There's room to spin out contributions upstream too. I submitted two PRs to twisted upstream; have started to work on annotations for pynacl in my spare time; and submitted a quick fix to typeshed.

Looking forward, I think we'd get a quick gain from ensuring that our smaller libraries (signedjson, canonicaljson) are annotated. We'll be sticking with mypy for now—the mypy-zope plugin is crucial given our reliance on twisted. We're also working to improve Sygnal and Synapse—though not to the extreme standard of --strict across everything.

I'd say the biggest outstanding hole is our processing of JSON objects. There's too much Dict[str, Any] flying around. The ideal for me would be to define dataclass or attr.s class C, and be able to deserialise a JSON object to C, including automatic (deep) type checking. Pydantic sounds really close to what we want, but I'm told it will by default gladly interpret the json string "42" as the Python integer 42, which isn't what we'd like. More investigation needed there. There are other avenues to explore too, like jsonschema-typed, typedload or attrs-strict.

To end, I'd like to add a few personal thoughts. Having types available in the source code is definitely A Good Thing. But there is a part of me that wonders if it might have been worth writing our projects in a language which incorporates types from day one. There are always trade-offs, of course: runtime performance, build times, iteration speed, ease of onboarding new contributors, ease of deployment, availability of libraries, ability to shoot yourself in the foot... the list goes on.

On a more upbeat note, adding typing is a great way to get familiar with new source code. It involves a mixture of reading, cross-referencing, deduction, analysis, all across a wide variety of files. It'd be a lot easier to type as you write from the get-go, but typing after the fact is still a worthy use of time and effort.

Many thanks for reading! If you've got any corrections, comments or queries, I'm available on Matrix at @dmrobertson:matrix.org.