If you know of any MSCs which you believe should be included in Matrix v1.2, but haven't started/finished Final Comment Period yet, please bring them up in the #sct-office:matrix.org, and we'll take a look. Thanks!

When I first came across this MSC, I didn't know what "Early Media" as a concept referred to. Even after skimming the MSC... I still didn't really know. But I'll demystify it here in case it peaks your interest and you would like to learn more.

Early media is essentially any media that is exchanged between the moment you start a call, to the moment the other side picks up (a connection is established). For instance, the ringing you hear while waiting for someone to pick up (called "ringback tones"), or the "busy" tone you hear when the line is busy. Those audio bits are known as "early media". Video can also fall into this category (though that's less common).

This MSC would essentially allow Matrix to introduce these concepts in Matrix-only calls (though these days the client just plays sounds while connecting), but more crucially would allow Matrix to interoperate with other protocols (like SIP) that expect to handle these features. 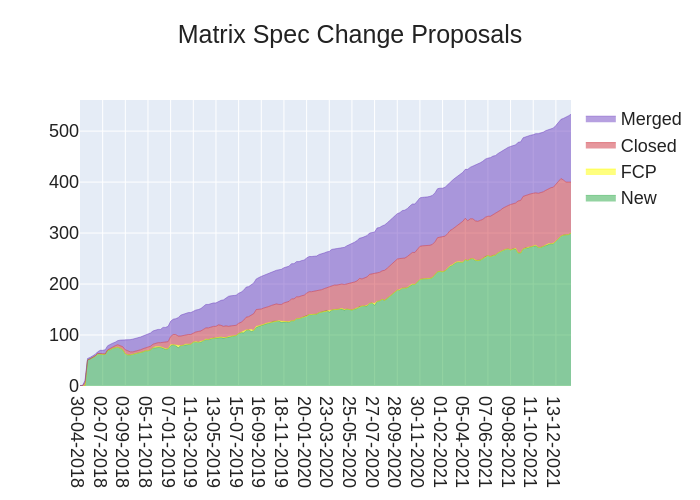 After a somewhat bumpy process, we released Synapse 1.50 on Tuesday! The big thing you need to be aware of is that we're turning off support for Python 3.6 and PostgreSQL 9.6, including Linux distributions which ship with those versions by default (like Ubuntu 18.04 LTS). Please make sure your infrastructure is up-to-date.

I'm personally very excited that we tracked down a bug which could cause device list updates to get lost when being sent over federation. When device lists fall out of sync, it can cause failures when attempting to decrypt messages, since the keys may not have been sent to all of the user's devices.

We've also made quite a lot of progress in allowing Application Services to support end-to-end encryption via the still-experimental MSC3202.

For MSCs which have been merged into the Matrix Spec, we now implement MSC3419, allowing guests to send state events into rooms, and we now use stable identifiers for cross-signing and fallback keys per MSC1756 and MSC2732.

Looking to the future: We're aiming to release 1.51 next week so it has plenty of time to burn in before we host FOSDEM 2022. This is a pretty quick turnaround from 1.50, but we'll return to our usual fortnightly release cadence for subsequent releases. To that end, 1.51.0rc1 is out today; give it a shot. 😉

Hello again! In the last week we continued to optimize the rocksdb backend and Conduit in general, trying to get it as memory efficient as possible. Using valgrind we could see that memory was not getting released in some cases.

We found out that switching to the jemalloc allocator completely got rid of this problem and memory usage seems to be a lot more stable now!

All of this is currently available on the next branch. We are preparing to make a v0.3.0 release soon!

Join #conduit:fachschaften.org to help us test it.

And back to regular form, my Helm Charts have gotten some upgrades again; element-web got upgraded to 1.9.9, and matrix-synapse got both 1.50.0 and 1.50.1 (the configuration generated by the chart shouldn't be affected by the .0 bug, but always good to upgrade)

A watchOS client for Matrix

It's been a while since I reported any updates on Watch The Matrix.

The following new features have been added: 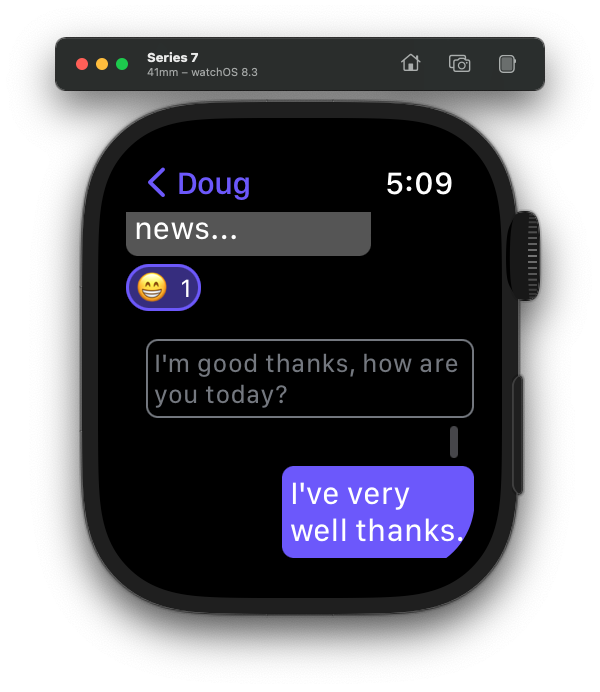 Sailtrix is a matrix client for SailfishOS

In labs (you can enable labs in settings on develop.element.io or on Nightly)

Next up: Bulk editing of rooms for updating room power levels or aliases in masses. If you're a maintainer of a homeserver, space or bridge, please let me know your use cases.

It's a small cli tool that does exactly what it says - exports matrix messages from a room. As example you can check etke.cc/news - that page and all items on it generated by emm from #news:etke.cc room.

Circles is a project to build a privacy-respecting, end-to-end encrypted social network on top of Matrix. It was originally built out of the desire for a safer way to share baby photos with friends and family, but it can be used by anyone who wants easy sharing combined with strong security.

The (old) Circles homepage: https://kombuchaprivacy.com/circles The code on Github: https://github.com/KombuchaPrivacy/circles-ios

long time no see! Today I come with a new internal etke.cc tool that publicly available, because open source matters.

Honoroit is a helpdesk matrix bot with end-to-end encryption support, that utilizes MSC3440 (Threading) to act as a proxy between a customer (any matrix user) and your backoffice (users added in special room), each customer's room = thread in a backoffice room, where multiple operators can send messages to the same customer at once. 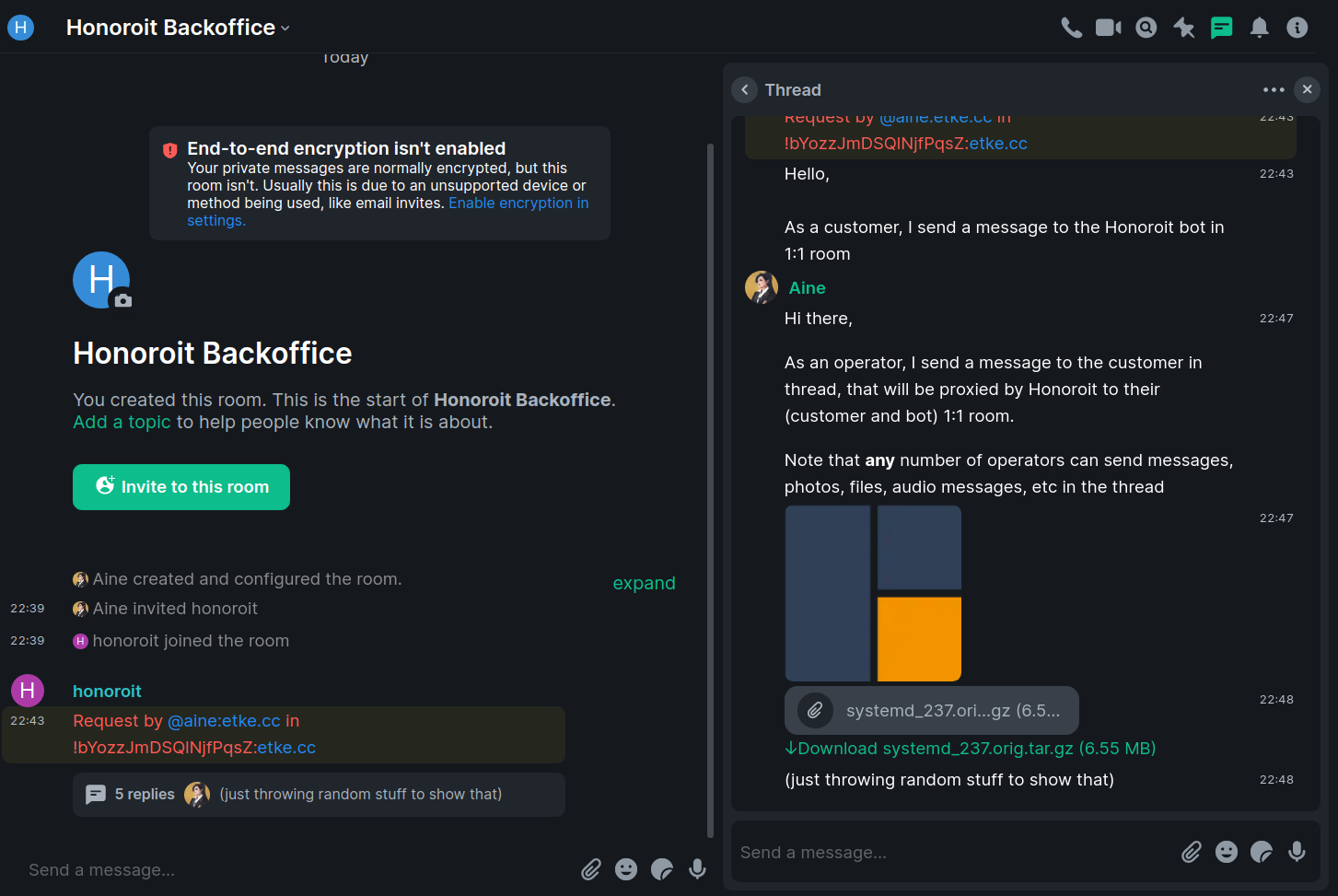 A Devianart Fork based on Matrix

Planned for this week is to add registration and usage of external profiles. As soon as that works I am also going to make uploading images work. So with a bit of luck in the next TWIM anyone is able to post their images :)

Hi TWIM. I published a long-planned, long-in-the-making, long-winded report of how I containerised my matrix-synapse homeserver and its PostgreSQL database in order to get ahead of the application dependency deprecations. This was something I couldn't find for myself, so I put this together to help anyone else who might need it. (And it does contain a TL;DR section!)

During the holidays I recorded a podcast about Matrix and Element with AnDaolVras/La Cantine Brestoise, which is a French non-profit organising tech events and operating a coworking space in Brest, France. The episode (in French, sorry!) came out on Monday and can be found on their website, on YouTube as well as on most podcast platforms 🙂