Dept of oh hey it's FOSDEM

We've got a devroom. check it out. https://fosdem.org/2022/schedule/track/matrixorg_foundation_and_community

And let me add

You can join our devroom at #matrix-devroom:fosdem.org to watch all the talks, and our stand at #matrix-stand:fosdem.org

Matrix v1.2 has landed! 🥳 Read the official announcement blogpost and check it out over at https://spec.matrix.org/v1.2/. This release includes headlining features such as Spaces, room versions 8 and 9 which bring restricted join rules, as well as the new Matrix URI scheme.

Otherwise, thank you to aaronraimist and devonh from the community for their fixes to the spec's text that merged this week. They are highly appreciated!

The random MSC of the week is... MSC3051: A scalable relation format!

This MSC proposes to pave a way to allowing relating an event to multiple other events, which unlocks some additional use cases. Go check it out if you're interested in extending Matrix's capabilities even further! 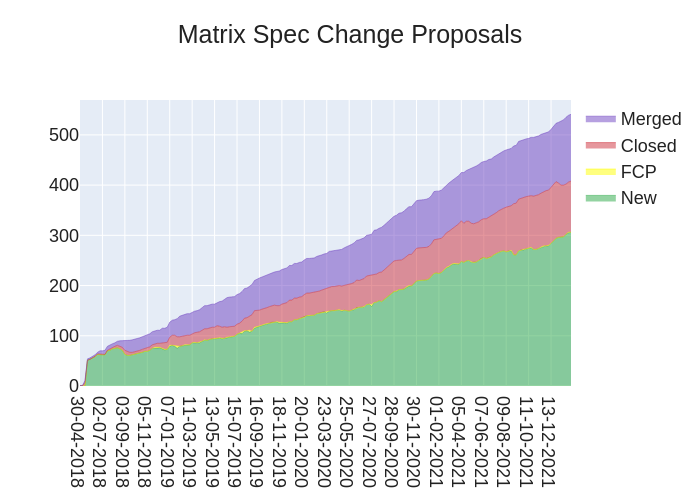 Synapse 1.52.0rc1 is out, but honestly, we're just all hands on deck for FOSDEM tomorrow! As a reminder, members of the Synapse team will be giving a couple of talks during at the event:

Be sure to check out all of the talks in the Matrix.org Foundation & Community devroom or visit the Matrix stand for more freeform discussion — we'll see you there!

Today we've released Dendrite 0.6.1 which contains a number of fixes and improvements. This release includes the following changes:

Spec compliance, as measured by Sytest, currently sits at:

As always, you can join us in #dendrite:matrix.org for Dendrite discussion and announcements.

Hey everyone, this evening we will finally release the next Conduit version: v0.3

If you have questions about anything, come and ask us in #conduit:fachschaften.org

We have managed to get a lot of features and improvements into this release, here are some of the most exciting ones:

This chart creates a polylith, where every component is in its own deployment and requires a Postgres server aswell as a NATS JetStream server.

dendrite-helm is an experimental Helm Chart to deploy a polylith/monolith Server.

After last weeks release of Dendrite 0.6.0, I finally updated my Helm Chart to finally reflect that.

Special thanks to locmai, who added the missing dependencies!

It's FOSDEM! Don't forget to checkout my 5 min ramble about custom stickers and emotes in Matrx: https://fosdem.org/2022/schedule/event/matrix_custom_stickers/

In preparation for FOSDEM, I've also been working on some goodies so that you can participate using Nheko in a limited manner:

While this isn't grand, it should be good enough for some to participate using Nheko. You will need the latest master (some commits aren't even pushed at the time of writing!), but if you are just watching, this should give you an easy way to fetch the talk link for each room. You will still have to watch the actual talk in your browser though.

LorenDB also added a big, fat, red offline indicator. If your server dies because of FOSDEM, now Nheko will tell you.

I hope you all will have a great time and I hope I see you around!

A Matrix client; forked from Mirage.

Releasing Moment, a fork of Mirage! In case you missed out on Mirage, here's what this is:

After 6 months of inactivity on the Mirage project, Moment brings it back to life. We have fixed some important issues and will continue to maintain Moment! 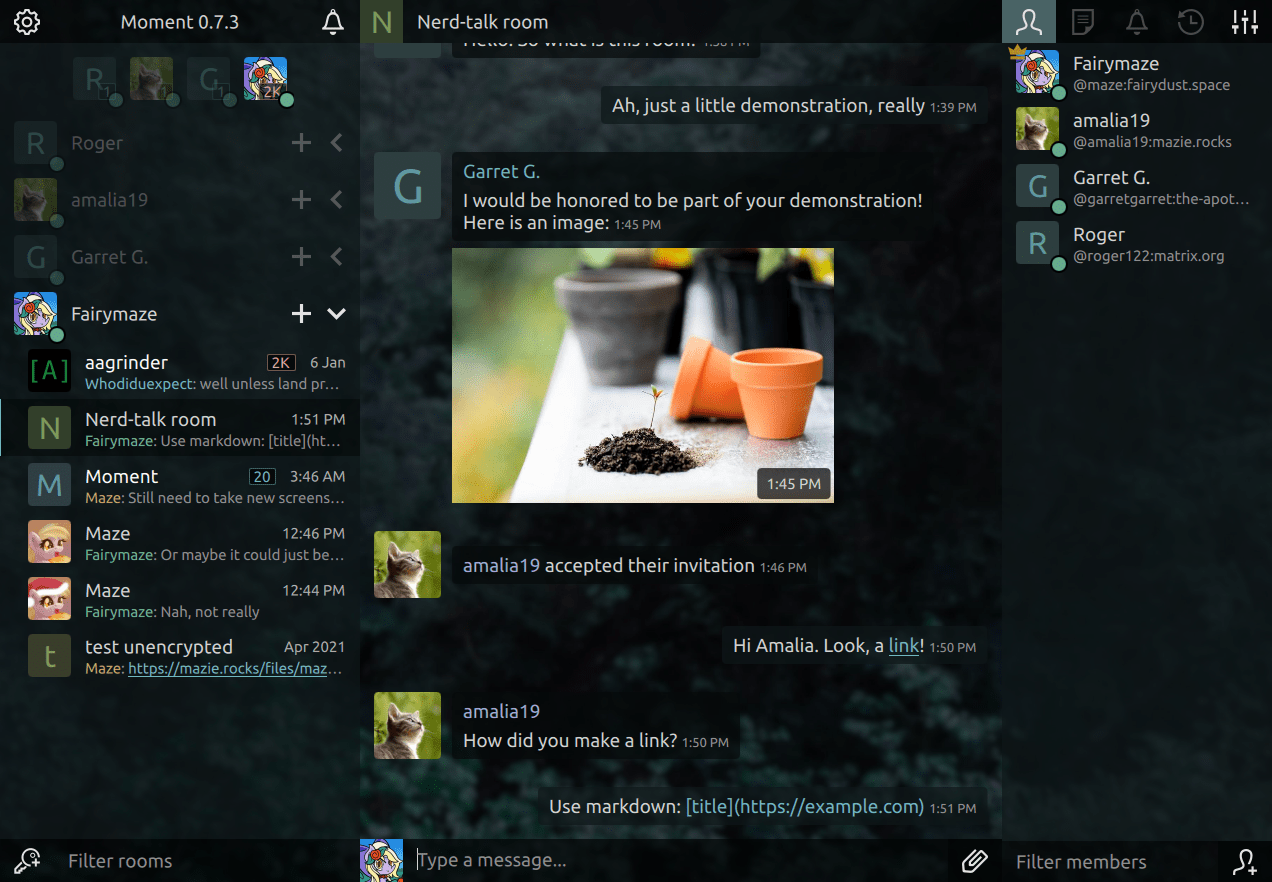 🎺 We've released Hydrogen 0.2.24 and 0.2.25 with session backup writing and some bug fixes! From now on you shouldn't need to have another client running along hydrogen for keys to be written to the key backup!

Welcome to another week of TWIM at Element! Here’s our updates:

In Labs (Enable labs features in settings on develop.element.io or Nightly)

Here's a big populus viewer update! Since last time, I've been mostly working on improving the user experience and onboarding for non-experts, as well as making my teaching-assistant bot a little smarter - this work is ongoing. But I have had time for a few new features 😁

The reason that MSC3574 is not a final draft is that I'm increasingly looking at the w3c's web annotation data model as a compelling foundation for annotations on Matrix. Stay tuned for a upcoming MSC, or come over to #opentower:matrix.org to talk about the future of annotation on Matrix!

I've also been working on a proof-of-concept for one Matrix use-case that I'm hoping Populus can help fill. Social annotation can be a good tool for getting feedback on works in progress, or for discussing new research with your team or lab. Wouldn't it be nice if you could just pop open a paper on a preprint archive and start commenting, or say "hey friends, I'm reading this paper, what do you think?" And wouldn't it be nicer if you could do that and host the discussion on your university or team's Matrix server?

Here's a first pass at that idea: https://opentower.github.io/populus-philarchive/

At the moment works by just pasting in paper codes from philarchive.org - it'll preview bibliographic information and give you a list of discussions taking place around a given paper, with the option to create a new one. Sessions are shared with populus-viewer, and pdfs continue to be hosted by the original archive. There are a number of clear upgrade paths, by integrating with a preprint archive that has an open search API, or even by adding an OAI-PMH metadata harvester to the backend, to combine the metadata from a bunch of open paper archives. I'm really excited to see where this work goes.

A KRunner plugin to list joined rooms and possibly other things from nheko.

I have been working on a little project over the last week: nheko-krunner. nheko-krunner is a KRunner plugin that loads rooms from nheko, displays them to the user, and allows the user to activate said rooms. How does it do this? Well, I've also been creating a D-Bus API for nheko! This code has not been merged yet, but once it is, you will be able to create your own plugins that access nheko via D-Bus!

The current functionality of nheko-krunner is simply (1) search and switch to rooms that you are in (not unlike the Ctrl-K switcher), and (2) join rooms from their aliases.

If you want to try out nheko-krunner, you will need to build from the dbus branch in my personal fork of nheko and then install nheko-krunner from the above repo.

I hope that somebody finds this useful and I am excited to see what other D-Bus plugins may show up in the future!

Ideally, I want to focus as much on the Matrix Spec as possible, but for the v0.5.0 I might venture into the territory of the Synapse Admin API, e.g. for listing and deleting media in a room. Please contact me, if you have use cases around media moderation you'd like me to consider.

Now you can ignore messages from some users, defined in the -i cli argument.

For example, to ignore TWIM bot and me, -i @twim:cadair.com,@aine:etke.cc

No new release this week. I've been working on the video sending functionality, and I am looking forward to seeing what that enables ya'll to do! In the meantime, I've published a template / demo bot you can find here: https://github.com/WesR/Halcyon-stock-bot . In just 37 lines of (unminified) code, this little bot:

I'm always looking for more feedback, and love to see what people are working on. Come hangout in the Halcyon room: https://matrix.to/#/#halcyon:blackline.xyz Lastly, for more info at on the bot library visit https://github.com/WesR/Halcyon Happy Hacking! 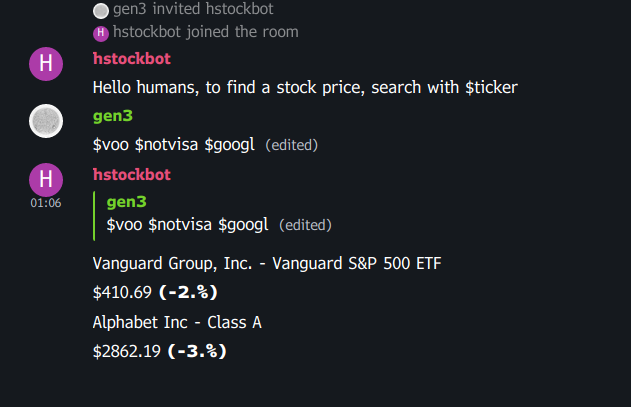 The Polyjuice Project has a new component: Polyjuice Client Test, a tool for testing Matrix clients. Each test has its own preconfigured homeserver environment, implemented using the Polyjuice Server library, and can be customized according to the needs of the test. Only a few tests are implemented so far, but many more are planned, initially focusing on testing functionality related to end-to-end encryption. You can see a demo of it in the Matrix Live video.

Thanks to HarHarLinks, matrix-docker-ansible-deploy can now install the matrix-hookshot bridge for bridging Matrix to multiple project management services, such as GitHub, GitLab and JIRA.

See our Setting up matrix-hookshot documentation to get started.

reconciliator and gateway for a managed Matrix server

matrix-corporal (as of version 2.2.3) is now published to Docker Hub (see devture/matrix-corporal) as a multi-arch container image with support for all these platforms: linux/amd64, linux/arm64/v8 and linux/arm/v7. Users on these ARM architectures no longer need to build matrix-corporal manually.

New version comes with in-memory caching for thread relations. It significantly decreases amount of requests to homeserver during thread relations solving, both for MSC3440 threads and reply-to chain fallback

A Deviantart Fork based on Matrix

This week the focus was on fixing quirks and making the profile (at least partially) editable and adding translations.

An R package To Gather Stats From Chat Platforms

ChatStat is an R package for making reports on Matrix rooms.

Ahead of my lightning talk on Sunday, ChatStat has been polished up and given it's first release. You can get it here. Huge thanks to @johrpan:johrpan.de for their contributions too.

The main highlight since my last TWIM is that we actually have report generation now! You can see an example here, or check the project wiki for an example of using the raw data with ggplot2 to make custom plots of your own.

If you do give it a try, please stop by #matrix-matrix_chat_stat:fosdem.org to let us know how you got on! 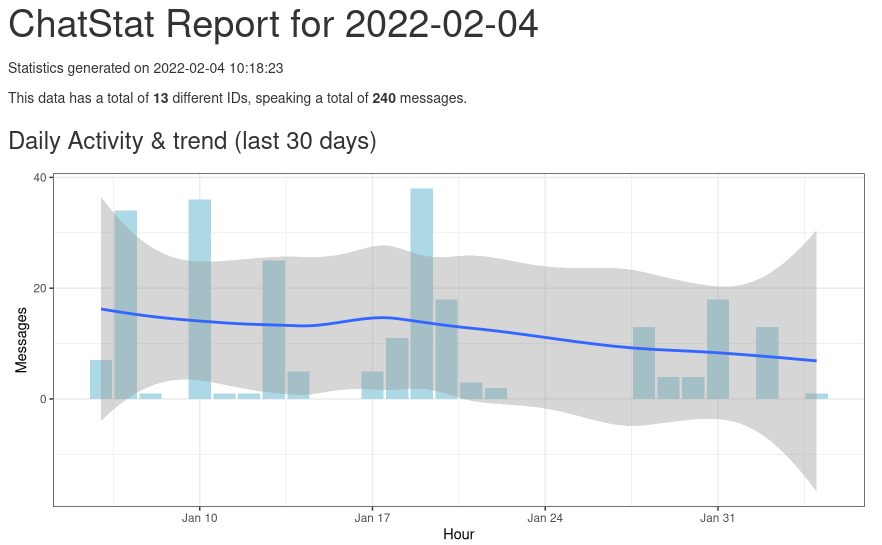 The season 2 of Raising Dion (a Netflix TV show) featured shortly a video call with Riot/Element and a few other open source software (e.g. Karbon). Oh and you might recognize a few usernames in the sidebar 😅

Circles has made it into a small German speaking Apple News site/App called ifun.de. „Circles-App: Neue alte Ideen für private soziale Netzwerke“ https://www.iphone-ticker.de/circles-app-neue-ideen-fuer-private-soziale-netzwerke-185764/ There wasn’t a mention of Matrix - which is kind of exciting really. This means it can just be the transparent layer of great apps :)