MSC3440 (threading) continues to move forward with a proposed final comment period this week. As a really useful feature in Matrix, it's great to see it getting closer to landing in the spec.

In a similar vein, MSC3613 (combinatorial join rules) had a proposed final comment period. The intention of this is to be a simple mechanism for resolving the "it's not possible to have both a restricted and knock room" situation - as both introduced mutually exclusive join rules. This MSC will likely serve as the basis of a new room version whenever it lands.

The random MSC of the week is... MSC3144: Allow Widgets By Default in Private Rooms!

This MSC makes the case for allowing widgets to be created in private rooms by default. The actual spec for it is blocked behind having widgets in the spec (see this tracking PR if you're interested).

As noted in the PR though, this MSC could build on the existing im.vector.modular.widgets unstable prefix for widgets in order to create an implementation for this feature. It does not appear to have happened yet though. 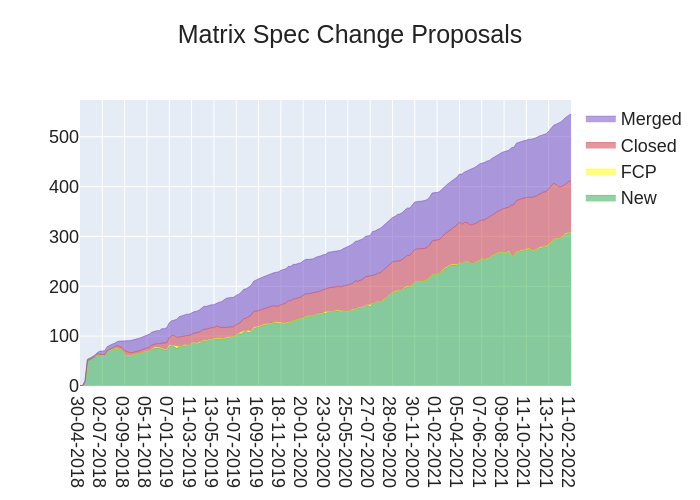 This is a smaller release as it's coming off of our FOSDEM sprint, but we look forward to getting back to more regularly-sized and featureful Synapses this month.

Notably, we've been experimenting with Poetry to better manage Python dependencies in our applications (Synapse, Sygnal, and Sydent). We just switched Sydent over this week and are working out the kinks in our CI and build pipelines. We're looking forward to bringing this consistency to Synapse next month!

See you next week!

Yesterday we released Dendrite 0.6.3 which is a primarily bug fix release. It contains the following changes:

As always, please feel free to join us in #dendrite:matrix.org for more Dendrite-related discussions!

Conduit v0.3.0 released last week and over 50 servers already upgraded! This week we looked into some bugs that still happen with this version:

These bugs will be fixed in the coming days.

This week saw more updates to my Helm Charts as usual; matrix-synapse is now at 1.52.0

I am pleased to share that both v2 and v3 of the Dendrite Helm Chart have now been released.

Version 2 included a bump in app version up to v0.6.0 and the necessary switch from Kafka to NATS.

Version 3 includes the addition of polylith support as well as some general improvements and fixes.

NeoChat 22.02 is out with the possibility of sharing files directly from NeoChat to other apps and services (Nextcloud, Imgur, email, ...). We also added support for minimizing the application to the system tray on startup and you can now label accounts to better organize them if you are using the multi-account feature. Aside from that, we spend some time fixing many small bugs and paper cuts reducing the total amount of open bug reports by 20%. 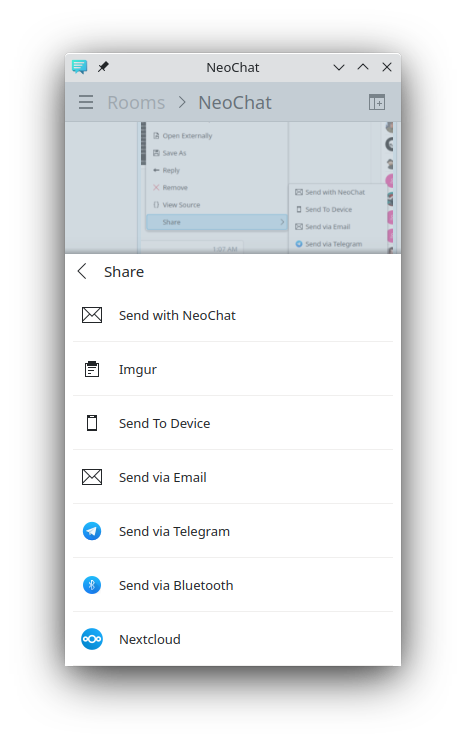 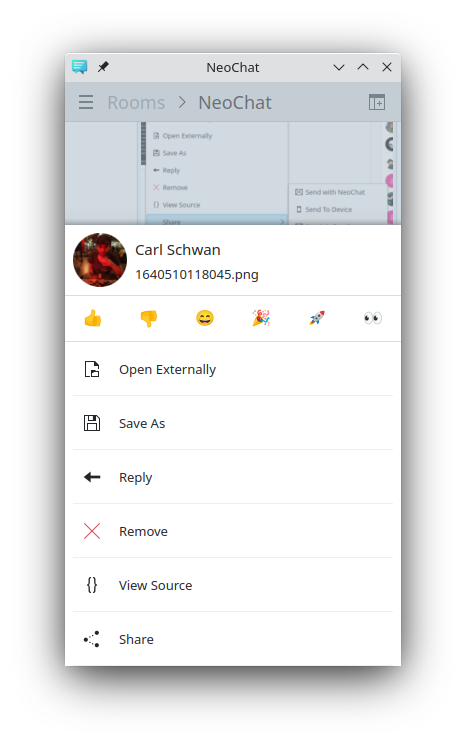 We've release 0.2.26. You can now create rooms and direct messages with Hydrogen. There's also a bug fix in this release for replies not loading in e2ee rooms under certain conditions. 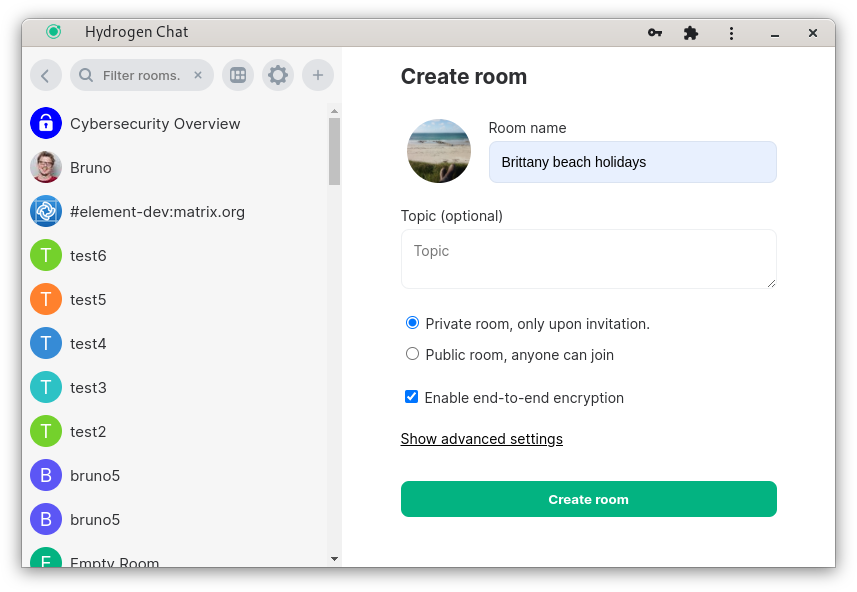 Welcome to another week of TWIM at Element! Here’s our updates:

In Labs (Enable labs features in settings on develop.element.io or Nightly)

Thanks to everyone who tested the maximised widgets feature which was recently added to Element Web. It received a sudden burst of attention as part of the FOSDEM conference. 😄 This week we've been fine tuning the feature to ensure it works for more workflows, and we've also cleaned up various associated widget bugs. In particular, in the develop version of Element Web, the pin and maximise actions are more consistent accessible, so you can toggle between pinned and maximised if e.g. you're in a conference room and temporarily want the stream widget to be larger while still having access to the chat timeline.

Next week we'll be focusing more on our Matrix-native collaborative document plans.

All you chats in one app.

Beeper is a universal chat app built on top of Matrix. We've created 12+ open source Matrix bridges and integrated them into an easy to use all-in-one service which does not require setting up your own homeserver. 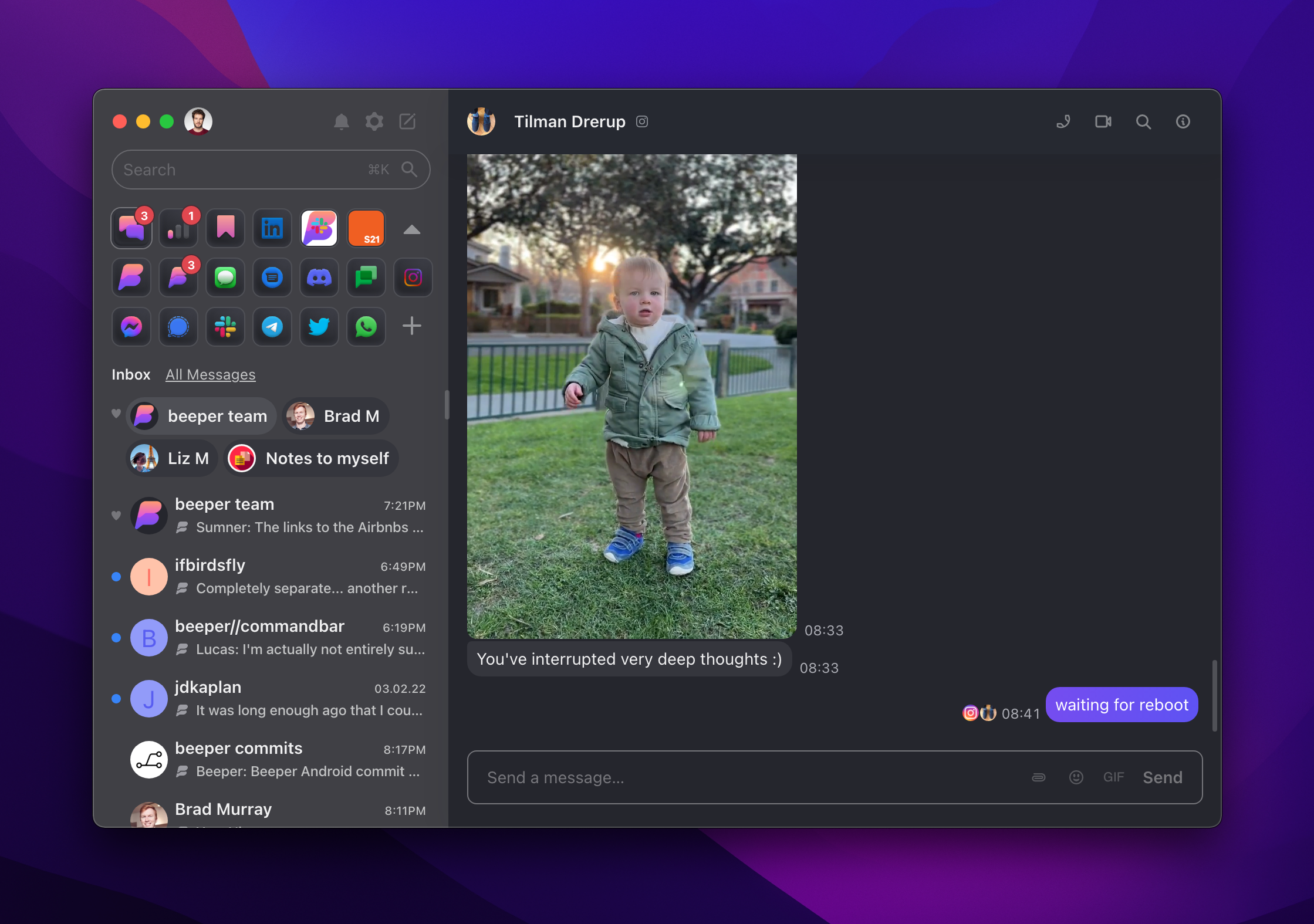 We’re excited to announce that as of today we are now out of Beta! We have been hard at work and we’re now ready to be sharing Beeper with a lot more people, starting first with the people we’ve built up on our waitlist.

For more details and demos on the current state of Beeper, including our recently rebuilt and relaunched iOS app, check out the update on our blog: https://blog.beeper.com/p/beeper-update-4-out-of-beta or watch the video below.

The new version contains two new features around the Synapse Admin API, making someone a room admin and listing all unencrypted media URLs.

I've had some good ideas on how to make Matrix Wrench cover more use cases while staying simple for both users and me as a developer. New components allow me to add new API endpoints in as little as 7 lines. So far this only applies to simple endpoints without parameters, like joining and leaving a room, but it can be expanded to more endpoints because of how similar all Matrix endpoints are. Props to the Spec! 🙌

Trixnity is now on version 1.1.7. Since 1.1.0 we have fixed many bugs and added some improvements and features. Our reference client runs amazingly reliable and fast thanks to Trixnity 🚀

Version 1.1.1 released This was a quick bugfix release for a finding by jeffcasavant, in which joining a room with a predecessor, the bot could crash. Thanks Jeff!

I'm always looking for more feedback, and love to see what people are working on. Come hangout with us in the Halcyon room: https://matrix.to/#/#halcyon:blackline.xyz

We have been using Matrix as a chat solution for the attendees of our biannual conference (KIF) and for new students during the introduction week, as well as Pretix to register attendants. Up until now the process to invite attendees to the corresponding Matrix Rooms and Spaces involved some curl and jq magic as well as manual intervention to connect both.

We have now replaced said manual process with a Pretix plugin that invites registered attendees to a configurable Matrix Room or Space. This plugin is now available on the Pretix marketplace or directly from its repository.

I'm excited to share a side-project I've been working on for the last ~3 months: Gatho (http://gatho.party) - a web app for hosting small gatherings.

Gatho is perfect as a replacement for Facebook Events for small social gatherings. I'm a 24 year old Australian who recently deleted Facebook - I've used Gatho for a few parties now and the guests have loved it!

Gatho includes a Matrix bot which, when added to a room, can synchronise RSVP emoji reactions to a linked Gatho event! See gatho.party/getting-started to hear how the Matrix synchronization works.

You can also create one-click RSVP links to send to your friends - no matter which chat/social app they use!

It's fully GDPR compliant and multi-region with an EU server and database, and uses NextAuth.js for passwordless authentication.

The Gatho website and bot is open source (AGPL-3.0) on Github, PRs and Github issues are very welcome! It's built using Next.js in Typescript.

I'd love to hear your feedback! Join the Matrix room at #gatho-events:matrix.gatho.party

The ping room has been upgraded to room v9. During the 452 days the previous (v6) ping room was alive, it received a total of 735997 org.matrix.dummy_events and 604459 m.room.message events.