There's been lots of new MSCs this week! Three of them - those regarding state restrictions and subkeys - are related to the ongoing live location sharing work that Element is currently working on. See MSC3672 for the current state of the spec work for that feature.

Otherwise the spec core team has been reviewing a flurry of MSCs this week. This includes MSC3383 (Include destination in X-Matrix Auth Header), MSC3700 (Deprecate plaintext sender key) and MSC2246 (Asynchronous media uploads). Exciting things in the pipeline!

The random MSC of the week is... MSC2815: Proposal to allow room moderators to view redacted event content! 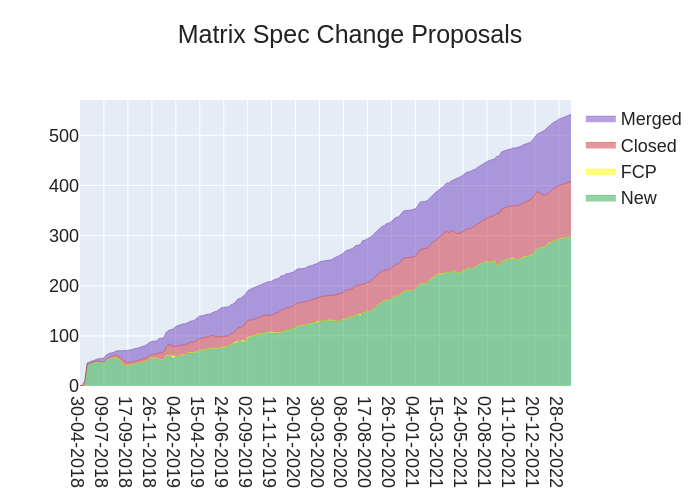 In case you missed it, we've released the first release candidate for Synapse 1.56 on Tuesday. This one includes a couple new module-related features, but also quite a few bugfixes and internal improvements. I'll talk about this in more details next week when Synapse 1.56 gets properly released, but the key points of this release is that Synapse will now refuse to start if it's configured with unsafe registration settings (i.e. open registration without any form of verification) as well as if it's running against a PostgreSQL database with the wrong locale values. Have a look at the upgrade notes for more information about this.

Apart from that, the team still continuing work on the two main topics I've been mentioning in previous weeks: fast room joins and integrating poetry. The latter is getting reeeally close to the finish line now, as the pull request has recently entered the review stage. So watch this space for more exciting news on this topic!

That's all for this week, catch you all next time 🙂

MMR v1.2.12 is out now with a bunch of added features, removal of in-memory cache (per last release's deprecation notice), and some bug fixes.

Most notable are some added/improved support for JPEG XL, HEIF, and HEIC thumbnails, content ranges support (allowing the ability to skip to a part of a video), and a way to make the logs a bit quieter.

Give it a go and report issues to the issue tracker 🙂

It feels like one of these comes out nearly every month, which probably means we're doing something right! This release takes a step back and fixes quite a few of our more longstanding bugs and fixes many nits here and there. Please read the change notes carefully as some APIs have moved around and your load balancers / config may need adjusting. One final note is that this release drops support for Node 12, making the minimum version Node 14.

Once again, thanks to the wider Matrix community for filing bugs and submitting PRs, it's very much appreciated! 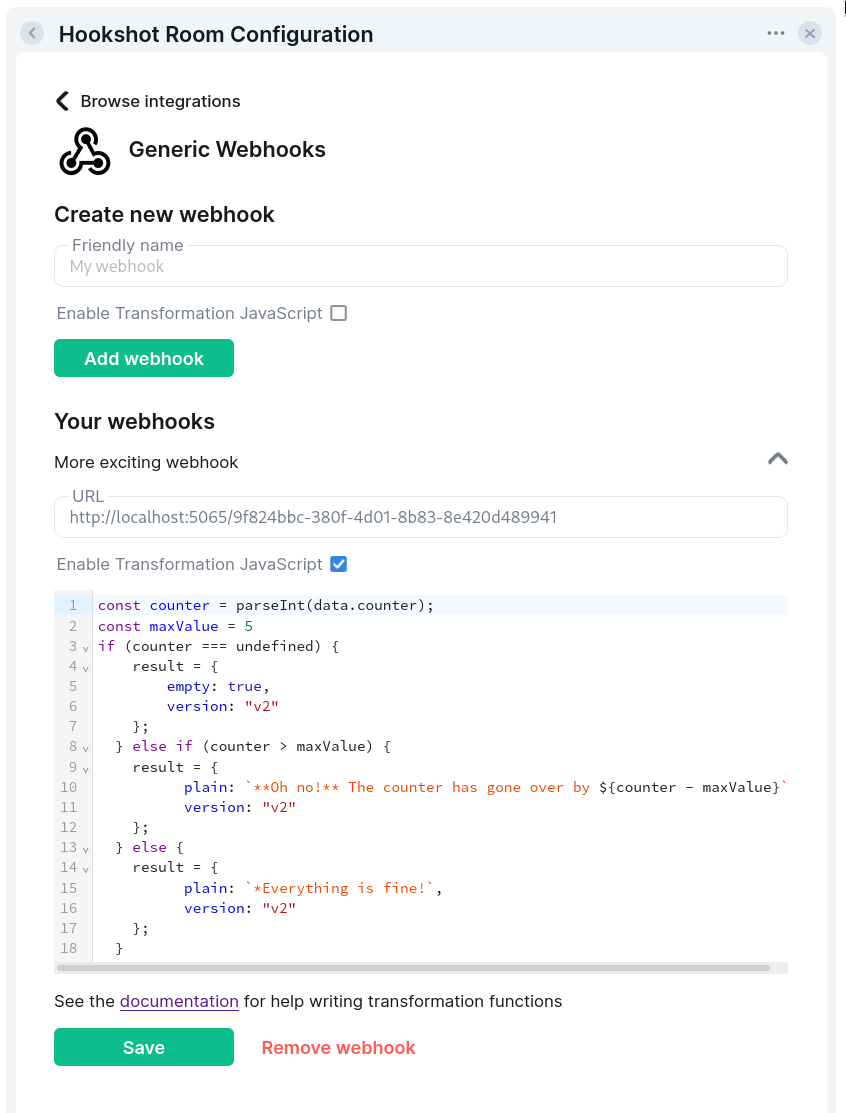 More updates! This week the bridge library itself gets a major update. We've made a few breaking changes, notably we now expect target homeservers to at least be Matrix v1.2 compatible. Also, this release brings the new "Provisioning and Widgets API" which allows developers to start creating HTTP APIs for their bridges which work for both provisioning mode (shared secret tokens) and widget API style (authenticating via Matrix OpenID token sharing). This stuff is still a little experimental, but it's starting to power our new experiments in the bridge world.

You can check out the release here

Media messages, both from or to KakaoTalk, are now supported! The biggest exceptions are inbound files & stickers. The latter may be a hard sell to get working, due to how KT manages stickers, but I'll look into it some more before giving a concrete answer.

The bridge is also now responsive to disconnects, like when you log in from another KakaoTalk desktop client (since the bridge mimics the desktop client, and KT only allows one desktop client to be logged in at a time!). Luckily, not all KakaoTalk APIs rely on the same connection that chatting does, meaning that some functionality can continue to work even when "disconnected". The bridge now takes advantage of this, meaning that profile-management commands (currently just the list-friends command) will work even if you get disconnected from chats for whatever reason.

The bridge is drawing ever closer to "good enough" status... Please give it a try if curious!

Heyo, we released a hotfix release for the IRC bridge this week. This fixed a rather nasty regression where the bridge would kick everyone from the Matrix side when a Matrix ban list is updated. People who aren't using the new ban lists feature don't need to upgrade.

1.0 is a big number and a step not taken lightly. But Nheko has been in development for half a decade and we think it is time to take a step forward! As such we worked hard to fix readability issues in the app. Your messages should now be readable on any theme, because we send the first half as white text and the second half as black text (thank you, rrogalski for the contribution). For accessibility reasons this is enabled by default. We also added an improved typing indicator. Sometimes it is hard to notice when a message is too long, as such we gradually adjust the background color the longer the message gets. It also helps a lot, if you have a bad theme and can't read the text against the background color. Just enter a few characters and the background will change, so the messages should become readable. But that is not all! We all know some people have a harder time seeing colors than others. So for accessibility we also slowly rotate the screen, so that even if your display is monochrome, you don't miss out. Please see the attached video for a demo or check out our release candidates here and here.

Before this month we also rewrote the room creation dialogs to be less confusing. We now have separate dialogs for direct chats and group chats, which should cut down confusion between the options by a lot. You can also now edit the topic and name of a room inline and Malte added a jump to bottom button. On mobile you can also now drag to the sides to reply. Last but not least, you can now knock on rooms from Nheko using /knock or if an invite failed because you were not allowed to join a room and you can add a reason to room joins, leaves, invites, knocks and everything. Some of those features require the server to support Matrix v1.1, so make sure you update your servers to use them.

Excuse the blurry picture, but Bubu just sent me this and I just had to share it! 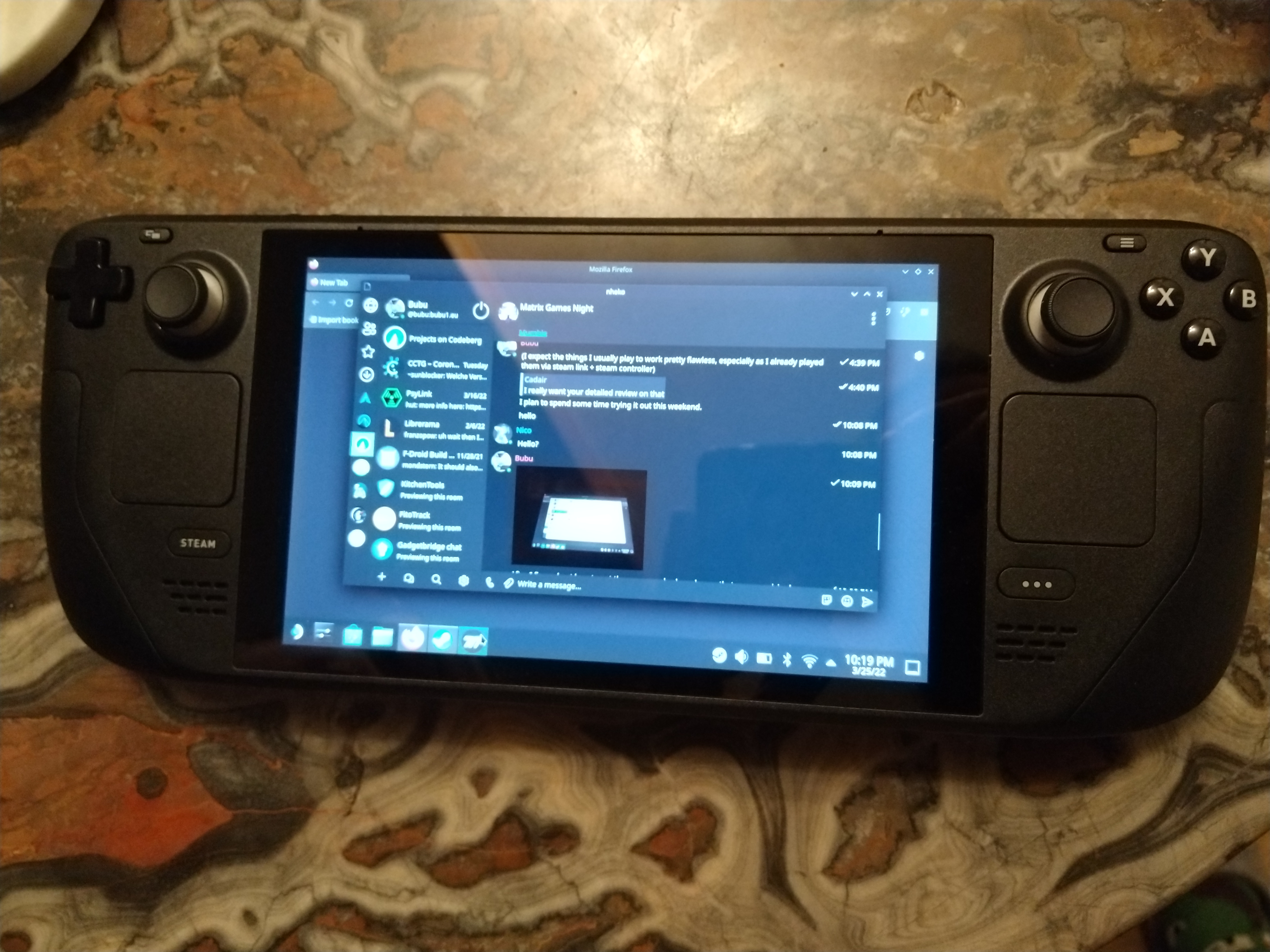 NeoChat now has a KRunner plugin thanks to work done by Nico (not the one from Nheko 🙂). This allows plasma users to search for and open matrix rooms directly from their desktop. You will be able to enable it from the KRunner settings after the next release.

Snehit changed the room preview to no longer show markdown characters, fixing a few situations where this would be unexpected.

On the end-to-end encryption side, we're currently working on implementing device verification. 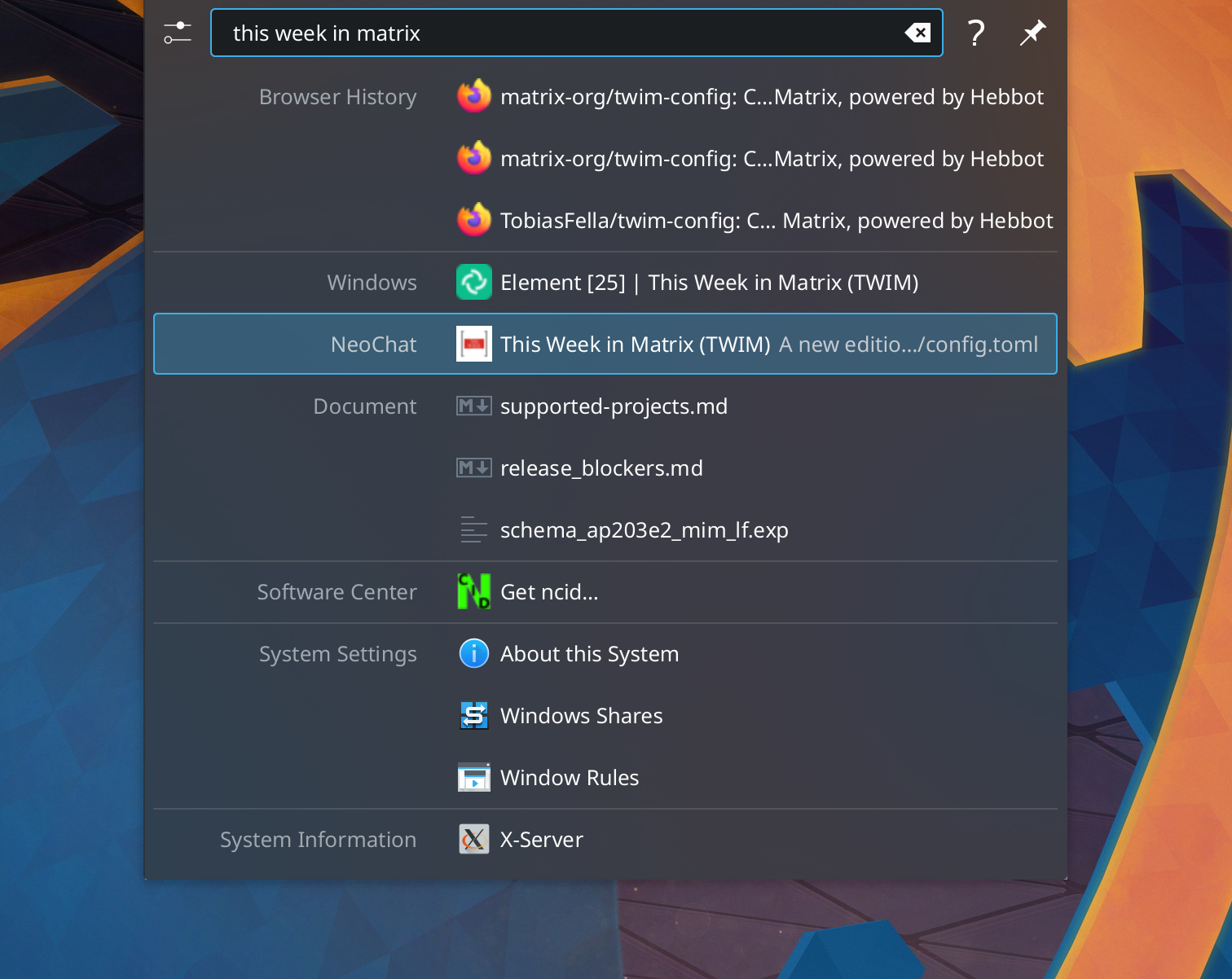 This week I have something really exciting to report. We moved Fractal-next to the main development branch. This means that we now have nightly flatpak builds[1], so users can already try out the new version of Fractal without having to build it from source. This will also give use much more feedback and many more bug reports, hopefully not too many :) Note that this isn't a release and the software should still be considered unstable.

It’s April Fool’s day but there will be no tricks here; We’re far too excited to share all our good work with you 😉

Coming soon to an Element-Web near you... 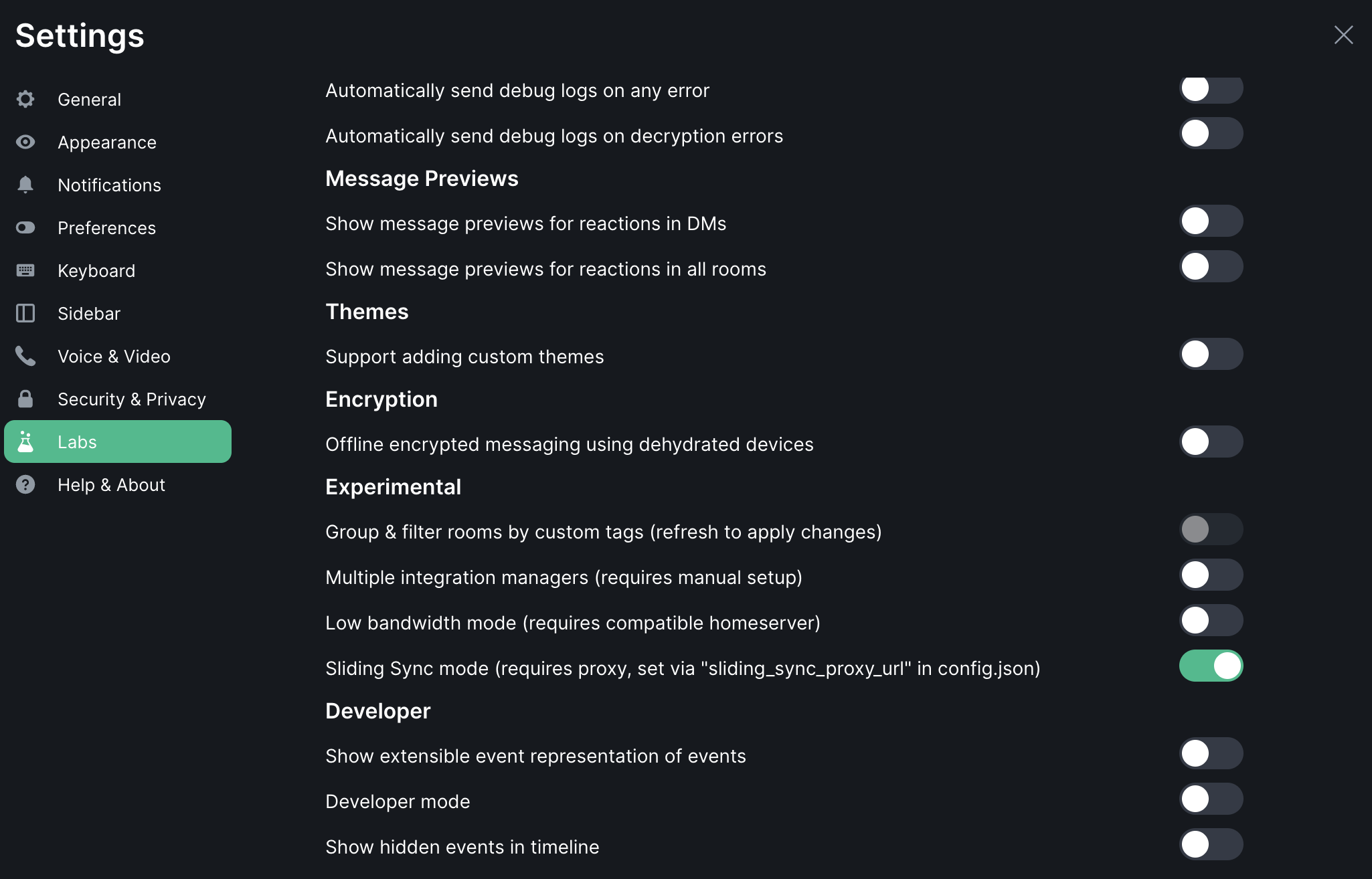 In labs (you can enable labs in settings on develop.element.io or on Nightly)

A decentralized and federated way of annotating the web based on Matrix.

Matrix Highlight got an update this week. I've switched the highlighting widget to use a shadow DOM, which means styles from the page don't affect styles from the extension itself. This used to affect quite a lot of pages, but shouldn't be much of a problem anymore!

There was also a decent amount of internal cleanup / developer experience work, so if you previously tried to contribute but ran into weird IDE bugs or code inconsistencies, make sure to check back. The same goes for sliding sync, which has been making decent progress – stay tuned!

I'm doing a talk about Matrix at the ACCU Conference on Saturday 9th April. Recordings of talks will be available soon after the conference, and tickets are still available to be there live in person or online! Here's the talk summary:

The Matrix network provides messaging (like WhatsApp or Slack) that offers all the features you expect, but without centralised control: it's an open standard, and anyone can run a server. The servers link together, so you can talk to other people even if they use a different server (kind of like email).

In the first half of this session, we will explore the basics of the protocol: making simple HTTP requests to send and receive messages, and discuss some of the interesting distributed-systems issues that make writing a server exciting.

In the second half we will explore the fact that messaging is only one potential use of this network, and look into some examples of other real-time use cases that are in active development, taking note of how these use cases benefit from the real-time and distributed nature of the network.

An image gallery for Matrix

There was some silence lately on this, but activity is picking back up.

Mainly, the project is getting rewritten. Why? Well, I learned from the issues and ran into issues with the framework used. There are going to be various changes to the architecture (like no more SSR, no nextjs, pwa support and more).

Another big thing that's going to change is that I am working on a complete redesign. While I am still fairly early in the iterations, I wanted to share the first art direction Matrix Art is going to go. The main changes are that I try to have an art language which distinguishes it from the other proprietary players, as well as compensating for the fact that Matrix Art has a much lower volume of images on it's feed. Please be aware that this is way before the first round of polish. :)

If you want to connect with matrix-art please join the room: #matrix-art:nordgedanken.dev or follow/star the github project :)