https://arewep2pyet.com is finally here as a tracker for our progress on P2P Matrix

In terms of Spec Core Team MSC focus for this week, we've been largely looking at proposals which are at or near FCP in an effort to get them through the last stages of the process. We're also thinking about what the next release (v1.3) looks like and when we'll end up putting it out into the world. If you have MSCs which you'd like included, please stop by the #sct-office:matrix.org on Matrix with your suggestions - if they're near enough, we'll try to get them in.

Random MSC of the week

The script has elected MSC3391: Removing account data as the random MSC this week. It's a small but interesting MSC which helps clean up account data on the server when it's no longer needed, though how this sort of removal gets represented to clients can be a challenge. It's currently missing an implementation if someone is looking for a medium complexity contribution this weekend 😉

So many MSCs are in the open state, which is why we're continually looking at merging MSCs which are ready to go. 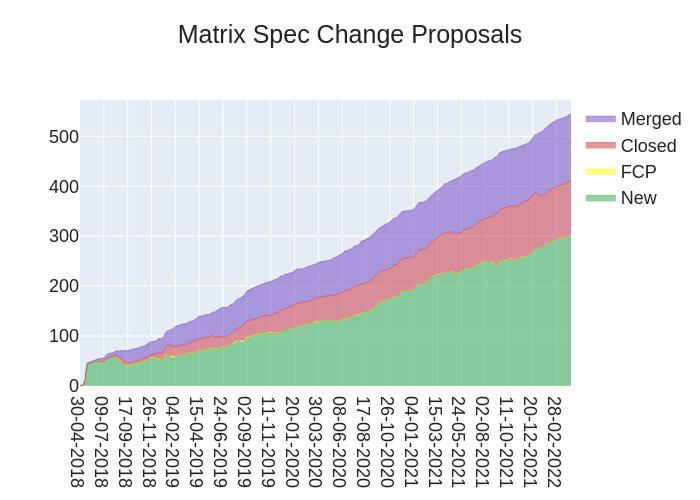 This week, we've released Synapse 1.56! It includes only a couple of new features but quite a few bug fixes and internal improvements. One of the main changes included in this version is that Synapse will now refuse to start if configured with open registration with no verification (e.g. email, recaptcha, etc). This is an attempt at reducing the likelihood of spam across the federation, as most cases of abuse we've observed over time usually involves the attacker(s) finding homeservers with open registration and automatically creating a lot of accounts on them in order to evade sanctions.

This version of Synapse also deprecates the groups/communities feature of Matrix. This is a feature we introduced back in 2017, and was the predecessor of Matrix spaces. But now that it has been mostly replaced by spaces, we have decided to retire this feature, which we thank dearly for its 4 years of good and loyal service to the federation.

Read all about this, and more, in the release announcement on the Matrix.org blog! 🙂

This week we released Dendrite 0.8.0, which is primarily a feature release, and then Dendrite 0.8.1 which fixes an emergency bug. It's also a recommended upgrade if you are running a Dendrite deployment. It includes:

Our sytest compliance numbers are now:

As always, join us in #dendrite:matrix.org for more news and discussion.

Matrix-Hookshot: The one with the widgets release

Hello webhook fans! As teased last week, configuration widgets have landed in hookshot! 1.4.0 now contains all you need to setup your very own webhooks without having to leave the comfort of your GUI. The plan is for widgets to be greatly expanded over the new few releases to support more services. Eventually, this work is going to propagate out to other matrix.org bridgey projects 🌉.

Update away, and let me know how you get on.

Many updates this week! New features include:

At this point, the bridge should be fairly usable now. Very soon I'll open a Matrix-bridged KT channel to act as a public stress-test!

Just your typical bug fix release but this release also breaks support for homeservers not supporting the "v3" API path so if you run Synapse 1.47 or older the bridge will not start. Sorry.

Go and get some spring cleaning from GitHub, PyPI or matrix-docker-ansible-deploy!

The latest Thunderbird beta finally has Matrix support enabled by default. Get Thunderbird beta now to try it out. There have been many improvements to the Matrix implementation since the last update, including:

Syphon is a Matrix client with heavy emphasis on privacy and ease of use; currently in open alpha.

We released 0.2.13 this week mainly fixing an annoying bug that could cause messages sent while a configured proxy server was down to be re-sent multiple times once the proxy came back online. If you use a proxy with Syphon, this update is highly recommended!

In addition, this release will only show the option to use hidden read receipts if the feature is supported by your server.

Finally, a range of translation updates and improvements are included in this release.

More changes are coming soon, including a (currently work-in-progress) implementation of MSC2228 (self destructing events). As far as we know, we're on track to be the first user-facing implementation of this MSC, putting Syphon on the bleeding edge of Matrix!

Thanks to the awesome polyjuice client, Nheko now supports MSC3700, which slightly improves privacy in encrypted rooms. It also lead to us fixing issues with the secure symmetric secret storage, where some clients use a different base64 encoding than recommended in the spec, which could make unlocking the secrets with a recovery key or passphrase fail. And we also improved the key queries on initial login, which would sometimes fail to_device messages with a warning, that the device is unknown.

As a small feature, you can now close the currently open room using Ctrl-W, spaces are not treated as DMs under some circumstances anymore, you should get a less confusing error message than 500 when entering an invalid alias now and lots of fixes to the translations.

Thank you, LorenDB, Apurv and Mikaela for the contributions!

Have released the SDK, v0.0.10 with custom tiles support. Calls and theming are getting closer, the latter we were planning to release this week but hit a blocker for theming support in develop mode, so we'll have to postpone to next week.

Since last time, we've made a lot of small quality-of-life improvements, but a few changes that stand out are:

Number 4 works nicely with my teaching-assistant-bot (built with matrix-bot-sdk, mathjs, and chartjs), which helps me visualize information about student activity.

MSC3752 - Markup Locations for Text, has also filled out quite a bit! Implementation coming soon hopefully.

As always, if you'd like to learn more, or talk about the future of social annotation at matrix, come join us at #opentower:matrix.org!

A decentralized and federated way of annotating the web based on Matrix.

Matrix highlight saw some "under the hood" changes this week, in particular a refactor to rely less on the Chrome/Firefox extension API. This should make it possible (in theory, and with some more work) to run Matrix Highlight on pages without installing anything! Aside from the obvious, I think that there are additional use cases opened up by this change; one such case I have in mind is as a commenting system on a site (a la cactus comments, but with the ability to highlight page snippets!).

In the process of all of this, I've spent some time running Matrix Highlight in Firefox. I've encountered no issues during this time, so it seems like the tool is usable from FF, too. 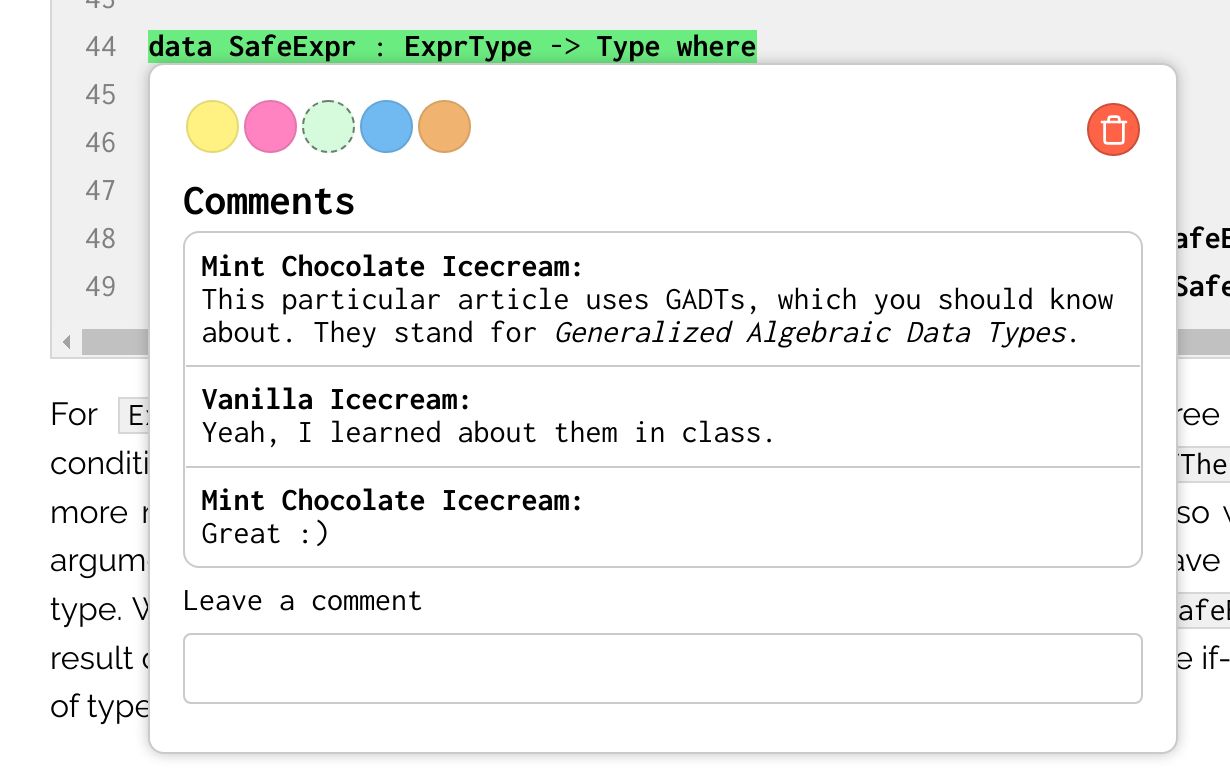 Trixnity 2.0.0-RC1 has been released. This release candidate contains many breaking changes due to a large refactoring, which allows us to share a lot code between server and client implementations of the Matrix APIs. Yes, that means Trixnity can be used to implement a matrix server! We also made some progress to make the client module (with all the high level logic) multiplaform. This is the only module, which does not support Kotlin/Native and Kotlin/JS yet. There are many other features (like client-side notifications!), which has been added. See the changelog for more details:

An easy to use bot library for the Matrix ecosystem written in Python. https://matrix.to/#/#simplematrixbotlib:matrix.org

Polyjuice Client Test is a testing tool for Matrix clients. Since the last TWIM update,

Dept of Ping will return!