Taking my GNOME Foundation hat on for this news: the GNOME Foundation is adopting Matrix! Is this TWIM worthy? It probably wouldn't have been if it wasn't for all the great work of Gwmngilfen! We published a joint blog post (though in all fairness Greg did all the heavy lifting) to explain how the decision was taken, and transparently share the data we had at hand.

In practice that means after years of Matrix being around in the GNOME community and being the most popular platform, it's finally moving out of the grey zone of "everyone is using it but some older contributors really like their current set up, so it exists but it's not officially our primary platform". For now we're keeping both our Matrix instance and the bridge to GIMPnet (the IRC network GNOME people have been using for years). The major change is that IRC is now our legacy, so if tradeoffs have to be made Matrix will keep the premium experience.

Again, huge shout out to Gwmngilfen who gave meaning to the data I handed to him.

Hello again everyone! Your regularly-scheduled TWIM Spec update has returned, along with graph-based media!

Quick news to point out this week is that a new maubot plugin has been written to simply note the details of MSCs after their IDs ("msc1234") have been posted in a room. The bot supports multiple MSC IDs in a message, message edits, threads and end-to-end encrypted rooms.

A copy of the bot is currently running under @mscbot:matrix.org, so feel free to invite it to a room if you'd find that useful!

The random MSC of the week is... MSC3216: Synchronized access control for Spaces!

This MSC serves as an alternative to MSC2962, and essentially allows for user permissions to be simultaneously enforced across a set of rooms in a Space. This would allow functionality to users of platforms like Discord, where a user can be a moderator in a guild, and thus in all of that guild's channels. 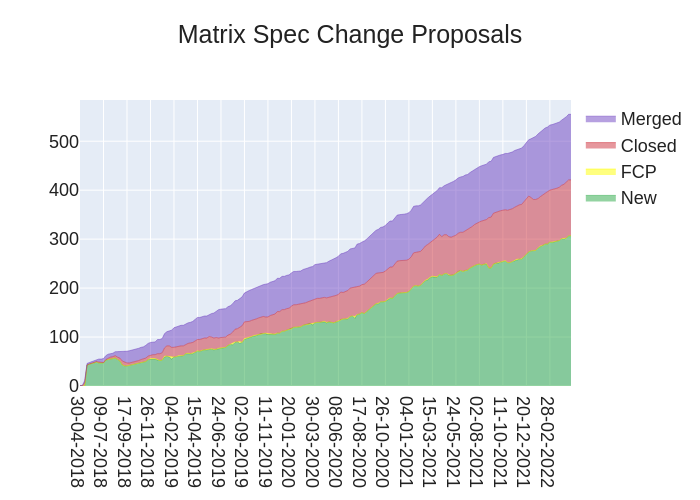 A few operational issues have taken up quite a bit of the team's time this week, but we've still found time to cut a couple of release candidates of v1.58. Highlights include:

We're also excited to see quite a few contributions from outside the core maintenance team: thanks to Dirk, Beeper, Famedly and everyone else in the community who has made pull requests!

Meanwhile on the core team, Sean has been continuing to lay groundwork for faster room joins, and Olivier has been doing some exciting work so that we will (finally) be able to test Synapse in worker mode under Complement.

This week we announced Dendrite 0.8.2 with a bunch of usability fixes. As always, join us in #dendrite:matrix.org for more discussion and updates.

The bridge should finally be at "Good Enough" status--and to celebrate, I've bumped the version to 0.2.0 🥳

I've also opened a PR to showcase this bridge on https://matrix.org/bridges/ 😃

Our last update included the words "if things go to plan", and even though that's usually calling for trouble, not so this time! We released Ruma 0.6.0 yesterday and apart from a tiny missing feature that was fixed and released as 0.6.1 today, everything went smooth 🙂

The biggest breaking changes are

Also, with this release we can now claim practically 100% coverage of Matrix v1.2, that is you can send and receive requests for all specified endpoints of the various APIs, as well as send and inspect all specified event types, all with a strongly-typed Rust API.

Thanks to Aine of etke.cc, matrix-docker-ansible-deploy can now set up the Buscarron bot. It's a bot you can use to send any form (HTTP POST, HTML) to a (encrypted) Matrix room

See our Setting up Buscarron documentation to get started.

There were no news about miounne for a while because we worked on a new "iteration" that can handle matrix encryption (thanks to the mautrix-go).

So, here is it - Buscarron v1.0.0 with e2e encryption and multiarch (arm32, arm64, amd64) support. It can handle any HTTP POST/HTML form and send it to a (encrypted) matrix room. Of course, Buscarron has small neat features like spam checker and rate limiter.

Go check out the source code and say hi in the #buscarron:etke.cc

I wrote a small, extensible bot that replays GPX recordings as a location sharing stream. This is an implementation of MSC3489: Sharing streams of location data with history and may help you debug the feature or see it with real world data. Join my Space to see this in action (with the Element Web Labs feature): #geo-trackers:iot-staging.ems.host or run the bot with your own rooms and GPX files. https://gitlab.com/jaller94/matrix-location-sharing

Opsdroid 0.26 has been released this week. Included in this release are some improvements to the Rasa NLU parser if you want natural language training for your matrix bots as well as some small documentation improvements to the matrix connector and other bug fixes. Big thanks to Oleg for many of the changes as well as all the other contributors.

The highly configurable message aggregation and filtering bot for matrix!

Matrix Community Manager has seen some work in the features department over the past week.

With the new Ansible playbook I think it's possible for someone with a bit of Ansible experience to get this bot up and running in under 10 minutes. I did a fresh install in 4 minutes. That is a fresh VPS and creating a new matrix account. Instructions for the Ansible deploy can be found here.

The major features are:

A few bugs were fixed as well:

We're meeting on Fri, 6th May at 6:30 PM in the c-base. Please join us, if you're looking for locals who work with Matrix and use it regularly. Our Matrix room is Matrix Meetup Berlin.