The Spec Core Team has decided to not include MSC3440 (threading via m.thread relations) specifically in the upcoming Matrix v1.3 release. We previously stated that it would be in v1.3, but there's a few unproven MSCs (namely MSC3773 (notifications for threads)) which make it feel improper to put threads into the spec at this stage. We're aiming for a future (very near) spec release to contain threads, assuming we can get enough of the feature landed. This is a very similar approach to what we did with Spaces: while the core feature existed as FCP-concluded for a while, we wanted to give some other MSCs a chance to land before writing it up formally.

As a follow-on from this, any implementations that are currently assuming "v1.3" spec support translates to threading support should note the following:

At the spec level, we'll still be writing up MSC3440's dependencies (aggregations and friends), but will notably be missing MSC3440 specifically in v1.3. If folks can update their clients urgently, it would be massively appreciated!

The random MSC of the week is... MSC2596: Proposal to always allow rescinding invites!

A simple change to the auth rules to help prevent an edge case where one is able to invite a user, but not disinvite them as the latter requires a separate permission. The MSC attempts to solve this by always allowing the cancellation of invitations you've sent.

A small MSC, but one with some open threads still. Perhaps a good opportunity to go in and clean it up!

Hello everyone. This week the team cut a release candidate for Synapse v1.59, which includes:

Meanwhile, the core team has looking at caches and memory usage: Erik has been looking at ways to reduce the memory usage of small servers, Shay's been adding some exciting new config options to limit the total memory usage of Synapse and David's added the ability to reload the cache factors of a running Synapse instance via SIGHUP.

In parallel, Olivier's been doing groundwork to reduce replication traffic for workerised Synapse deployments, Andrew (anoa) has been looking at media retention policies and work continues on faster room joins.

This week we've actually made two releases — Dendrite 0.8.4 and Dendrite 0.8.5 — which are both primarily targeting performance and bug fixes.

We've also released our new living documentation, which is available at https://matrix-org.github.io/dendrite/, which features new installation instructions and documents that will be helpful to Dendrite server administrators. We will be writing more documentation and expanding this over time.

As always, feel free to join us in #dendrite:matrix.org for more Dendrite-related discussion.

Most of this week's fixes are in the testing branch, so try it out!

Ement.el, a Matrix client for [GNU Emacs](https://www.gnu.org/software/emacs], received some more updates this week:

As always, feel free to join us in #ement.el:matrix.org.

Hello and welcome to another Element TWIM! 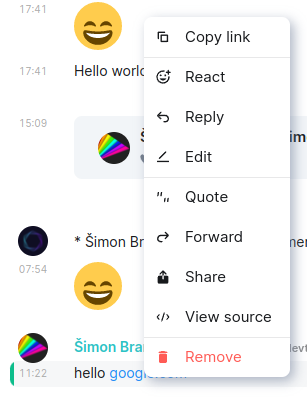 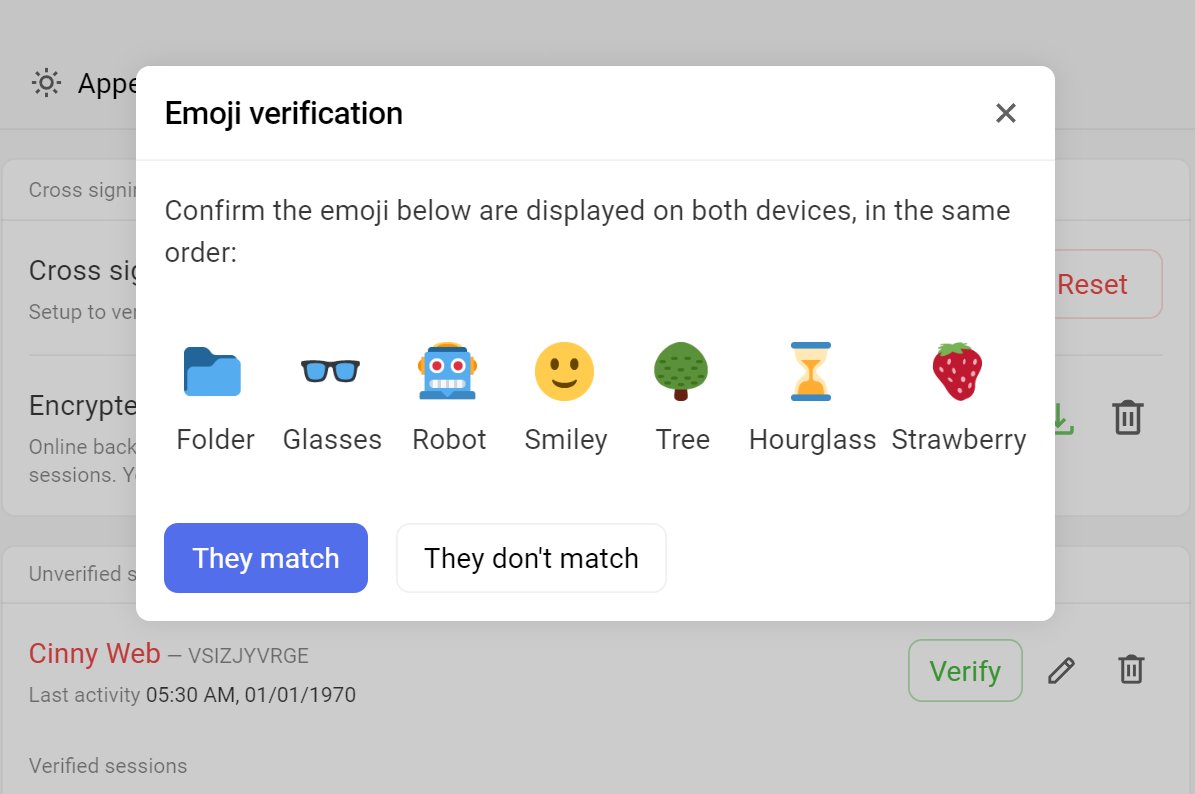 Since this release, we are also shipping a desktop app of Cinny for Windows, MacOS and Linux. You can download the app for your platform from https://github.com/cinnyapp/cinny-desktop/releases

The Rust Matrix team is very excited to announce the next major release Matrix SDK 0.5 "stores and native crypto", now available for everyone by adding matrix-sdk = "0.5.0" to their dependencies in their Cargo.toml. This first major release in about 8 months brings significant changes many have been waiting for:

For more details, check out the Release Notes.

Sidenote: If you want to contribute, or just learn Rust by actually doing it, we recommend taking a look team at the help wanted issues in our repo.

Buscarron is the new backoffice of the etke.cc and its main feature is to receive web forms (HTML/HTTP POST) and convert them into (encrypted) matrix messages.

Check out the source code and say hi in #buscarron:etke.cc

Who's In This Room Matrix Bot

If you use Matrix with the Signal bridge (or any bridge) with relay mode enabled, your guests have probably experienced the confusion where they don't know who else (on Matrix) is in the chat as only Matrix can double-puppet.

When this bot is added to a Matrix room, it will announce:

I built it just this afternoon using the excellent matrix-bot-sdk, but it's in Typescript and has plentyful unit tests!

I don't currently have a public bot, but if anyone is interested please join #whos-in-this-room-bot-discussion:jakecopp.chat and say hello!

PRs for adding support for other chat apps (basically identifying which bridge from the puppeted username) are very welcome! https://github.com/jakecoppinger/whos-in-this-room-matrix-bot 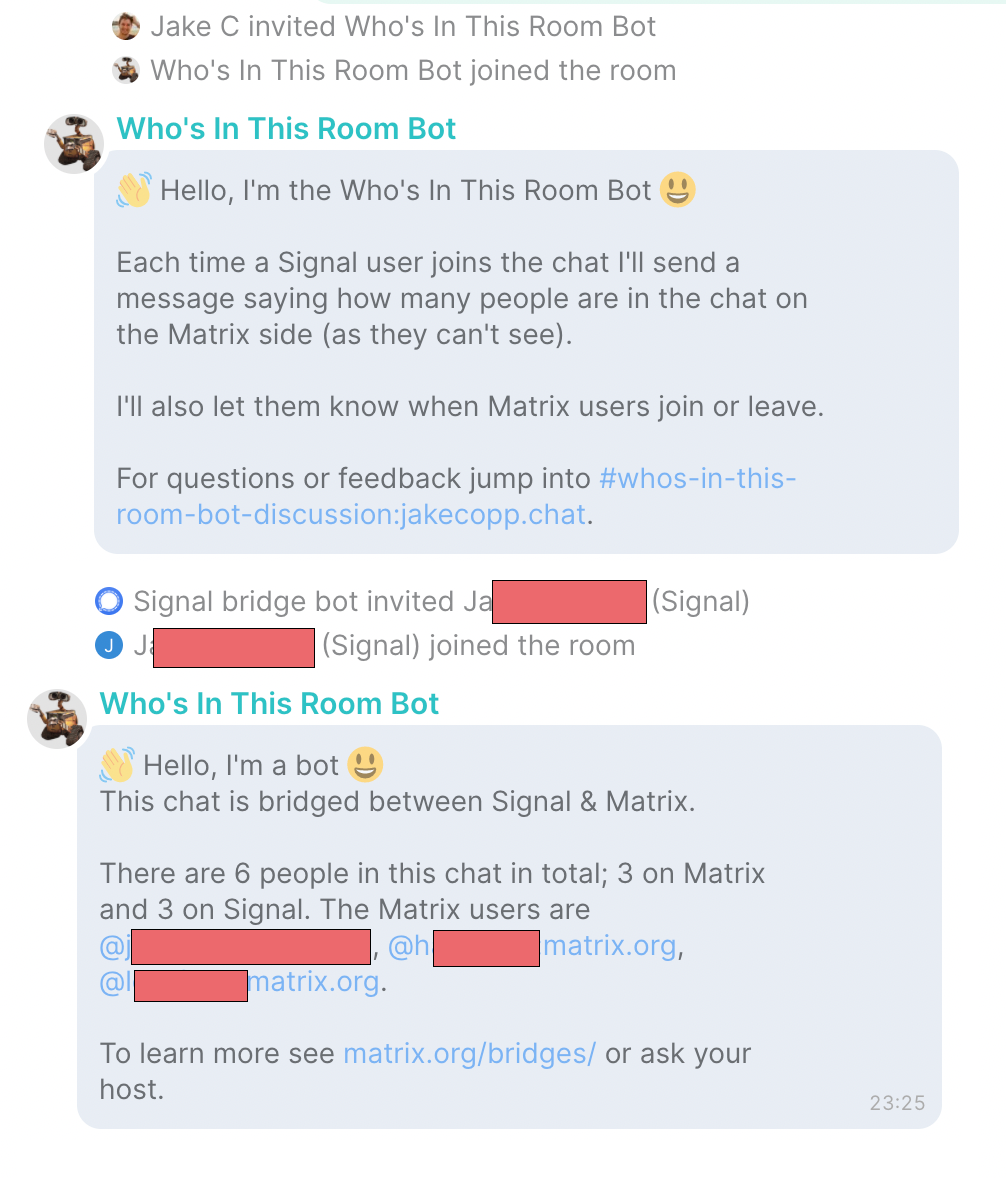 The videos from the HYTRADBOI conference a few weeks back are now publicly available, in case anyone was curious but couldn't make the conference. I gave a talk about building collaborative, open software on Matrix. The whole conference was great, so I recommend browsing the schedule for videos that may interest you. 😄