Element has signed the open letter of the Global Encryption Coalition, of which we are members of. We are working with them to push back against any intrusive measures that could compromise the privacy of users.

Some new MSCs popping up this week around widgets, room types, fixing notifications with threads and room version 11! Though note that the last one currently serves as a means for the Spec Core Team to publicly track what should be included in room version 11, and is by no means is its content considered final.

The Spec Core Team are currently focused on room version 10 and getting Matrix v1.3 out the door soon. There's also been some discussion on MSC2676: Message editing this week, with the intention of finally landing that in the spec. Thanks to richvdh for driving the charge there.

Homeservers currently make use of Client Server Media APIs to pull media from other homeservers over federation. This has worked for a long time, but is a bit of a confusing blur of the lines between client<->server and server<->server traffic. It also makes it difficult to require different authentication rules for clients versus servers.

This MSC aims to help clean that up. Take a look if you're interested! 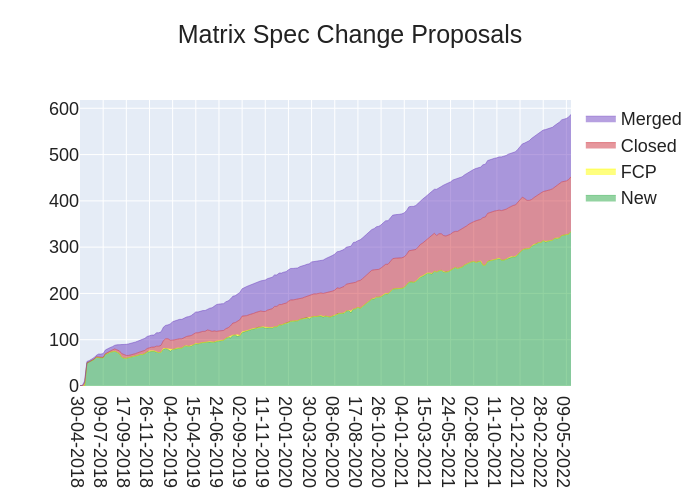 It's May 20, and Google has announced the results for its Summer of Code program.

This year the Matrix.org Foundation participated, and we could be granted the five slots we asked for!

Many thanks to all the candidates, we had some very strong proposals this year.

This week we released Synapse 1.59, which features a bunch of niceties including new features, bug fixes and performance improvements. Read all about it, including increased flexibility for workers and improvements on push rules, on the matrix.org blog!

Aside from this, the team is still hard at work and focusing on making Synapse better, among other things by looking at improving performances on room join and decreasing memory usage.

and more! Visit #hookshot:half-shot.uk to follow the development in real-time.

Also, testing adds support for joining KakaoTalk rooms from Matrix, either by joining an existing portal or providing an Open Chat URL to the bot with a join command. ...However, I've been unable to test this, since KT is stingy about whom it allows to join Open Chats! So please give this a try if you can.

In other news, this bridge is now listed on Matrix.org! 🥳 Thanks Thib !

Also, for the time being, I will be taking a hiatus from this bridge & the LINE bridge, as I'll be quite occupied for the foreseeable future on account of having joined Element 🤩!! (The bridges aren't paused forever--I just have to work out the details of their future before making any promises I can't keep 🙂)

Special thanks to all those who have given feedback & advice on these bridges, and to Beeper for having sponsored their development ❤️

A bridge between Matrix and Discord.

Hello! Just a notice to say that the `matrix-appservice-discord project has kindly been adopted by the matrix.org foundation, which means that hopefully there will be a lot more time available to maintain it than when it was my personal project! We expect to have a new update for you (the first one in 1.5 years) very soon! If you've got any questions about this, please feel free to ask in the usual spots like #discord:half-shot.uk.

Some cool stuff this time around! Aside from many bug fixes this release has two great new features: IRC message colors and hiding invites from channels.

IRC colors are enabled by default and are rendered how your Matrix client sees fit. They can be disabled per network if needed.

Hiding joins works with room v9 restricted join rules feture to allow IRC ghosts to join rooms without an invite from the bridge bot first. This clears some clutter and may even make joining a bit faster in the long run - we will see. This feature is disabled by default and needs to be enabled by the bridge administrator as it is consiered a "labs" feature for now.

Go and get a Dell from GitHub, PyPI or matrix-docker-ansible-deploy!

In the last weeks, we've landed a few smaller features and papercut fixes in NeoChat:

We're also making progress on the end-to-end encryption support where we hopefully will soon have news from libQuotient's side. 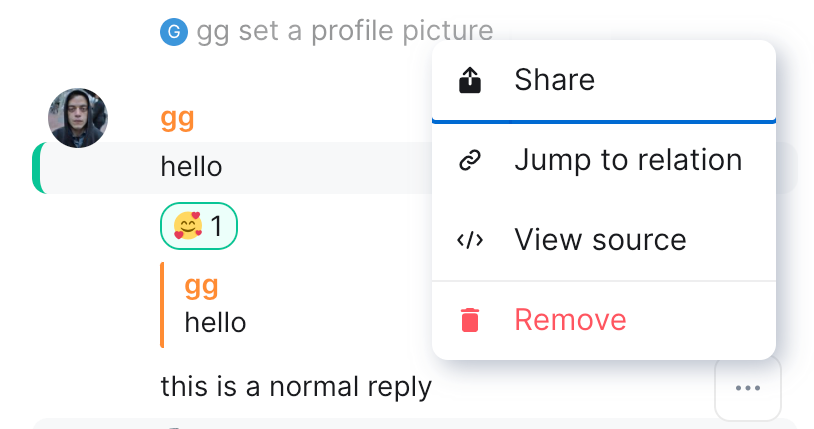 In the last two weeks, populus-viewer has seen some exciting changes:

Here's a demo video of video annotation, and a screenshot of the new landing page: 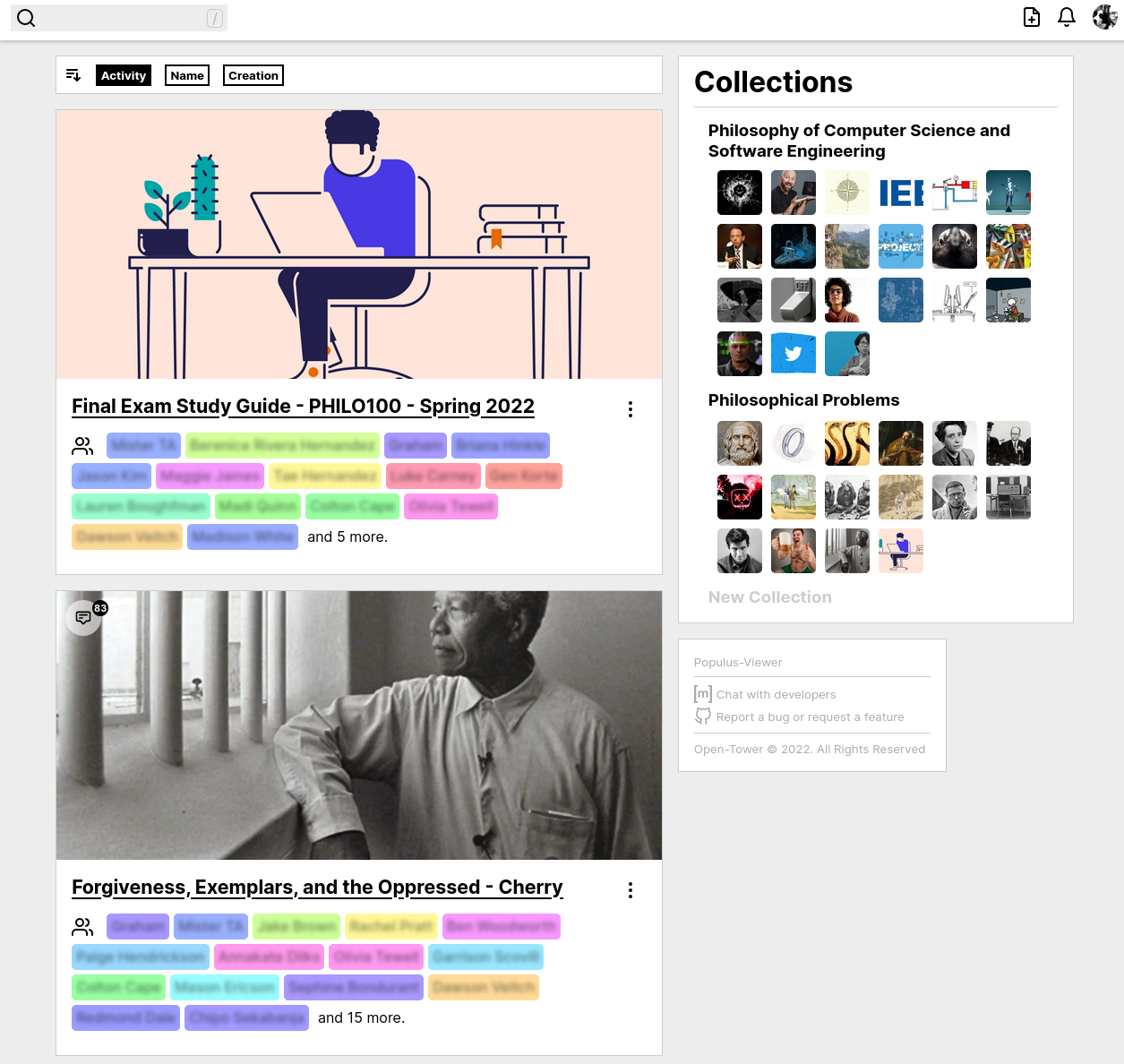 A widget for moderating with mjolnir. Highly WIP. Use at your own risk!

Check it out at https://github.com/MTRNord/matrix-moderation-widget or join #mjolnir-widget:nordgedanken.dev if you have any questions.

Post release (we have release 0.5.0 last week) the main focus was on minor fixes and bigger features we had pending but didn't want to merge before. Aside from a few documentation and other minor fixes - among others switching to resolver v2 or more accurate power_level calculation - the biggest merge was around the FFI interface for Apple (iOS and Mac), which we have initial support for now 🎉.

The main work is currently happening behind the scenes, while we prepare for the upcoming tasks - like WASM and NodeJS support for the crypto-crate and work on UniFFI. We are also hardening our processes for improved security and risk management around our code base, dependencies and the potential to ship binaries.

👉️ We are very happy about the influx of people, who joined our developer community questions since the release. We'd like to take this opportunity again to invite anyone else interested in hacking on matrix in rust to check out our help wanted tagged issues and join our matrix channel at #matrix-rust-sdk:matrix.org.

Matrix SDK written in pure Dart and maintained by famedly.com

Also, we now properly update the user lastActiveAgo on presence event updates and not when opening a room.

Finally, we moved the MSC2835 support into its own extension.

See you next time ;)

We are proud to announce that Ossrox is now listed as a hosting provider on matrix.org! 😍 We offer Matrix Home Servers via https://ossrox.org - for the time being only in the German-speaking area. We are dedicated to hosting open-source software and also offer other services in the messaging, groupware and web meeting segments. If you got any questions, just reach out to us at #public:ossrox.org.

Hello Matrix friends. We have recently launched an online learning platform that has Element at its core. We added some great features such as annotations for both course material and web pages. Here is an overview video of what we are doing.