This week was very busy and we unfortunately didn't have the time to record a Matrix Live. Everything will be back to normal next week!

The big news from the spec last week is the release of Matrix v1.3 🎉 (read the blog post if you haven't already)! Roughly three months since the release of Matrix v1.2, this release brings improvements such as knocking on rooms, room version 10, reduced metadata in encrypted messages and the first pieces of aggregations finally landing in the spec proper. And more! See the blog post for the full changelog.

Most of the Spec Core Team has been away this week, thus there has not been much moving forwards. But we do have two new MSCs from @duxovni and @Johennes, which you can view above.

The random MSC of the week is... MSC3077: Support for multi-stream VoIP by @SimonBrandner!

This MSC allows for differentiating between different incoming streams of media coming from a single user by adding a sdp_stream_metadata dictionary to Voice over IP (VoIP)-related events. This is a relatively simply addition with useful functionality, such as allowing a single user to share both their camera feed and screen share at the same time!

Check it out if that kind of stuff interests you! 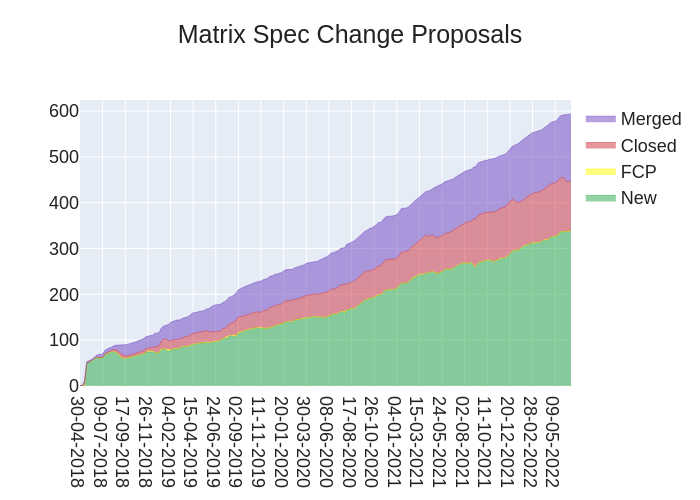 Conduit v0.4.0 just came out and fixes all the problems you were having* and more! Read the changelog on https://conduit.rs/changelog

Over the last few weeks we've:

Along with a number of other minor bugfixes and UX improvements. And, we've added one neat new user-facing feature: inline previews of video and audio annotations. This one is a little hard to explain, but a video is worth ten thousand words:

Over the last month since the last update, we