This week Matthew gives us a general update on everything Matrix and Element. What is going on with Sliding Sync, OpenID Connect or P2P Matrix? Let's find out!

We're also pleased to announce the next episode of Open Tech Will Save Us has been scheduled. We will be talking live and interacting with you on July 27, 16:00 UTC (18:00 CEST) on the subject of platforms with people from GNOME, KDE and Element.

The Spec Core Team took a concentrated effort to work through our priority backlog of MSCs, resulting in the decent amount of MSCs hitting FCP this week!

Thankfully the community has nearly matched this number by adding quite a few more MSCs into the fray. But we're still up by 1!

Perhaps one of the most exciting MSCs to move forwards is MSC2676: Message editing, which allows users to edit events (including messages) that they've previously sent. Part of the aggregations work, this functionality has been used extensively throughout the ecosystem. But only now is it making its way into the spec proper. I'm also personally excited about MSC2285: Private read receipts, which allows users to read a room's contents without advertising it.

Of course the above MSCs are still in Final Comment Period; a 5 day period where anyone can raise their concerns about an MSC before it is accepted. So if you have any last-minute comments, be sure to get them in now!

The random MSC of the week is... MSC2666: Get rooms in common with another user!

Another MSC I'm personally excited about! This MSC provides an endpoint on the homeserver to request the rooms (or spaces) you have in common with another user. I would find this useful for incoming DMs from users I may or may not know. Note that the client may not already have this information if it is making use of lazy loading room members, so it needs a way to ask the server for this information.

Looks like the MSC is currently sitting in the Spec Core Team's review backlog. We'll get to it soon! 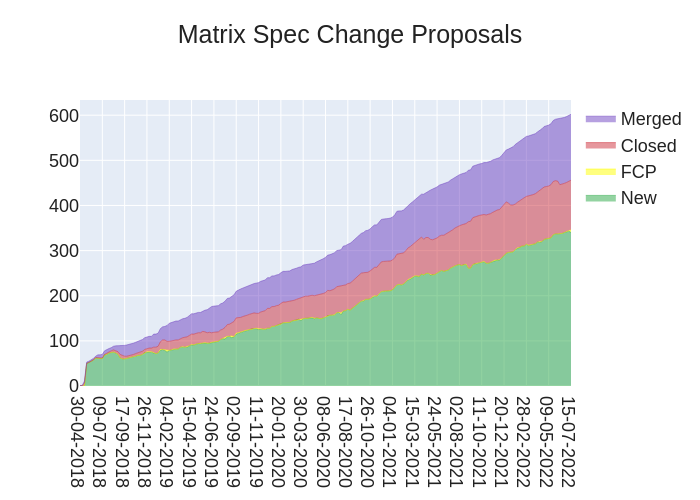 The Synapse team has been hard at work! This week we published Synapse 1.63.0rc1. Among the notable features are support for MSC3827: filtering /publicRooms by room type, allowing for better discovery of Spaces. You can read more about that here. In addition, the release contains a number of bugfixes, updates to the documentation, and internal changes focused on reducing memory usage and increasing performance, as well as supporting the long-standing goal of faster room joins. More on these next week in the official release announcement!

Good news, as you might have noticed, conduit.rs is back online and better than ever! Matrix.org is so kind and donates this Linux server to me. I already host a discord appservice and handle 23k messages per day and, most importantly, now I'm at the top of both #ping rooms ;)

On the development side, I'm currently working on a big refactor, see https://gitlab.com/famedly/conduit/-/merge_requests/365 and please give feedback if you have experience this is your chance to have a lasting impact.

rofi is a application launcher and dmenu replacement. https://github.com/davatorium/rofi. I made a little plugin for it to switch channels on the nheko matrix client https://mzte.de/git/LordMZTE/rofi-nheko

With this the feature set I wanted to have for the next release is complete. I wanted to focus on improving moderation and room management capabilities in Nheko and it does now have a very basic sets of capabilities to do so. I do already have plans to expand on them though!

So instead of working on new features, I will be focusing on bug fixes. For a start if someone has the username room, Nheko will now omit the reply fallback to prevent pinging the whole room. The verification window now also should always be big enough to show its contents and we now properly explain to users, why emojis might look different on different devices fixing an issue reported via Twitter... There is also a new icon for the room directory (it is now a building, very punny, huh?). 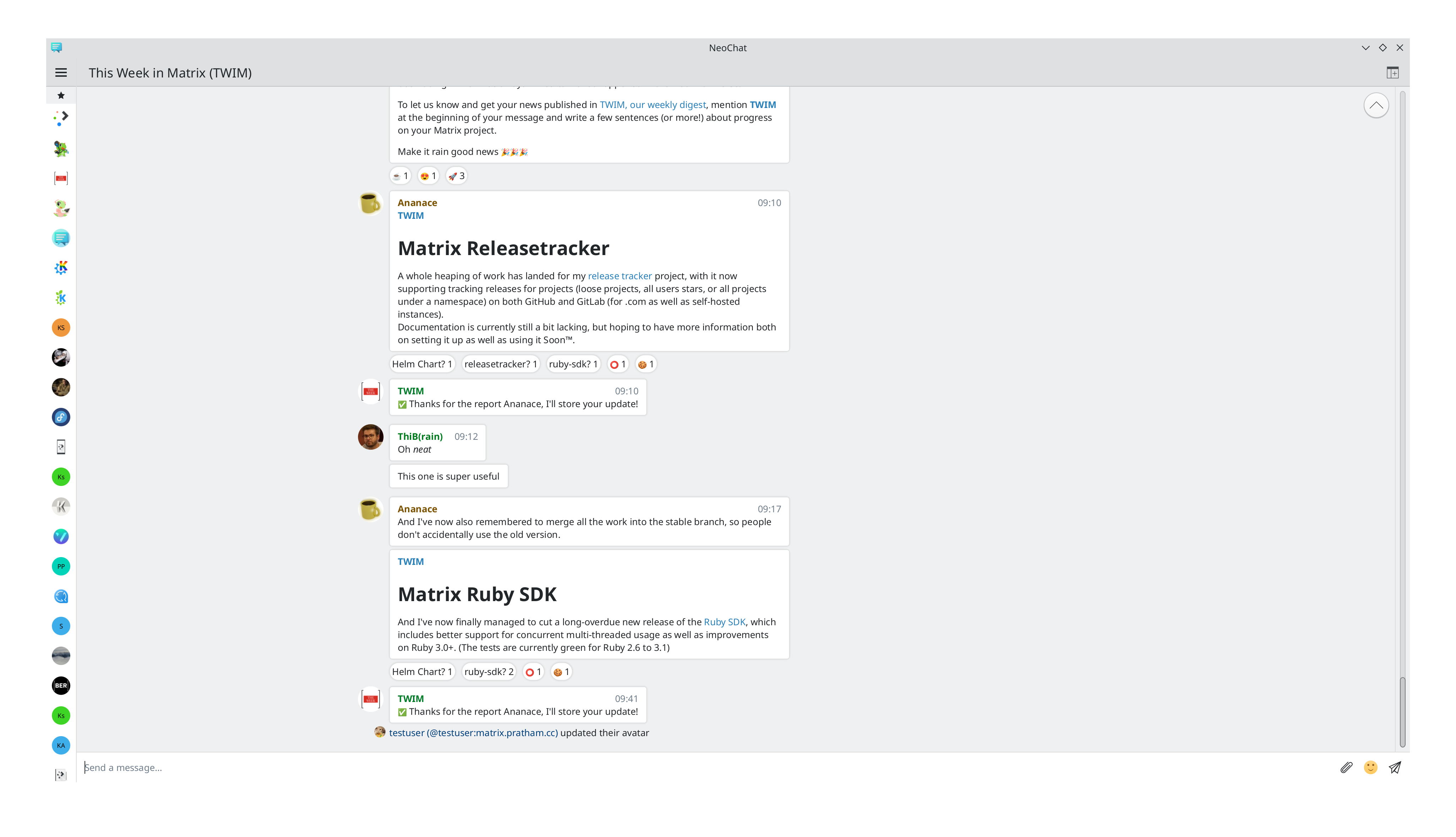 1.4.28 is being prepared with the following changes:

In the last two weeks or so, we've made some UX improvements:

We also added one feature that friends of mine were requesting 😃: annotations can now be equipped with a "motivation" (part of the w3c web annotation data model, mentioned in MSC3574), and filtered by motivation. This makes it easy to, for example, mark some discussions as "questions" about the text, which is pretty useful when managing a class.

And I've now finally managed to cut a long-overdue new 2.6.0 release of the Ruby SDK, which includes better support for concurrent multi-threaded usage as well as improvements on Ruby 3.0+. (The tests are currently green for Ruby 2.6 to 3.1)

The team is proud to announce the first release of @matrix-org/matrix-sdk-crypto-nodejs to npmjs.com (0.1.0-beta.1) for all the best npm user friendliness you can get. This marks the first release of the crypto ffi for nodejs from the rust team supreseeding the previously existing project. It is also the very first release for nodejs featuring the great new vodozemac core (replacement of libolm). We've marked this as a beta release while we work out any remaining minor hickups or problems, so if you see something, say something! However, the main point of contact to it for most people is probably TravisR |s Nodejs Bot SDK, which is already consuming that beta in its latest release.

A TypeScript/JavaScript SDK for Matrix bots

After a year of working on different ways to support encryption, the bot-sdk has finally stabilized on the rust-sdk crypto crate for crypto bindings internally. Tutorials on how to get your bot/appservice set up and working with the new crypto code are here (note that for appservices you'll need to turn on EDUs and MSC3202 in Synapse). If you run into problems, please report bugs or pop by #matrix-bot-sdk:t2bot.io on Matrix for help.

Alongside support for encryption, v0.6.0 brings a whole lot of other functionality for appservices, Synapse Admin API users, and bots wanting to make use of real DMs. Check out the full changelog here.

axon.sh v0.17.0 has been released which adds support for managing per-user ratelimits, and includes a fix for a bug related to server discovery. Please try it out and report your experience in #axon:matrix.thisisjoes.site, I'd appreciate feedback!

A release tracker that posts updates into Matrix rooms

A whole heaping of work has landed for my release tracker project, with it now supporting tracking releases for projects (loose projects, all users stars, or all projects under a namespace) on both GitHub and GitLab (for .com as well as self-hosted instances). Documentation is currently still a bit lacking, but hoping to have more information both on setting it up as well as using it Soon™.

my conference talk at ACCU this year is now out on YouTube: Matrix is a Distributed Real-time Database. I explain what Matrix is, and show how to use curl to send and receive messages, and why it's "interesting" to write a server, and, as the title hints, I introduce the idea that Matrix can be for a lot more than messaging.

We encourage everyone with matrix-related projects, products and ideas to come around and give a talk: From the past to the future, from the moment of the idea, the story of the creation or the vision of the future. We’d like to understand the principles as well as the technology. The conference is from people for people, so if you’d like to talk about yourself, your community, your organization, please do. Showcase yourself and your relation to the Matrix world. Let's get to know each other! We aim to compile a versatile program. We are open to contributions of any length, from 5 minutes (lightning talks) to presentations and talks to workshops and hacksessions up to 5 hours. We’ll come together to discover, celebrate and enjoy the world of matrix. Also, if you have any arty, cultural or playful contribution in mind, please offer it.