Here's your weekly spec update! The heart of Matrix is the specification - and this is modified by Matrix Spec Change (MSC) proposals. Learn more about how the process works at https://spec.matrix.org/proposals/.

The Spec Core Team had another retro this week, and part of what we talked about was how most of the spec PR writing falls to just a few people. Starting this week, we're going to try and diversify that work across the Spec Core Team, both for reducing bus factor and increasing bandwidth of spec PRs. Hopefully the results of that will be noticeable!

For those that don't know, "SAS verification" refers to the act of two devices verifying each other through the use of Short Authentication Strings (SAS). This is the backbone of emoji verification when you verify with another user or one of your own devices.

It turns out that libolm, the olm and megolm encryption library, originally incorrectly encoded the base64 output of the message authentication code (MAC) calculation, which is a values that's passed between devices. Due to trying to maintain backwards-compatibility with older clients, this has not been fixed in newer clients yet.

This MSC proposes bumping the MAC algorithm identifier (which is agreed upon between devices when verifying) to a something new, which allows newer clients to know when to use the new or old (and incorrect) method of calculating the base64 encoding of MAC values.

As far as I can tell, this has no security implications. It's just unfortunate to have incorrect base64 encoding when interfacing with other, non-libolm, implementations of olm and megolm. 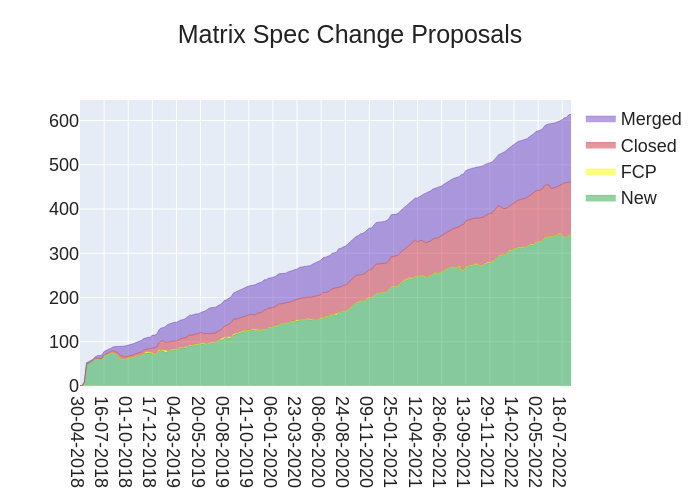 The Synapse team is hard at work making Synapse faster and leaner. Work continues apace on faster room joins over federation, and it seems that the work might land sooner rather than later, although there are no solid dates yet. In other news, profiling work is being done to determine ways to hopefully increase the speed of local room joins and DM creation. Stay tuned for more information in the future on that. Finally, it was an RC release week. Synapse 1.65.0rc2 was released, and it contains some fun features and bugfixes. Check it out!

Dendrite is a second-generation Matrix homeserver

This week we released Dendrite 0.9.2 which contains the following updates:

This brings our current test compliance figures to:

As always, please feel free to join us in #dendrite:matrix.org for Dendrite-related discussion.

What? Another week, another major release? Yes, we want to make breaking changes obvious, and the bridge now requires Node.js 16+.

The release fixes the outdated yarn.lock file. Thanks to the package maintainers of NixOS to point this out! 👋 Furthermore, mentioning Matrix users in Discord got fixed.

Similarly you can now somewhat edit what rooms are in a space. I grew up with Windows 98, so this is a very nested right click menu. We are still discussing some of the wording choices for the options there, so if you have any opinions about it, feel free to give feedback about it! This is part of the bigger goal to be able to manage your communities from within Nheko, so stay tuned for more features coming in that area.

red_sky (nheko.im) also improved our notifications code on macOS. You can now disable the notification sound in the system settings, which for some reason requires badge permissions to show that option... macOS will always remain a mystery to us! Similarly we fixed the source text for notifications on Windows, which should now not show a stray %1 anymore as well as a few other cleanups. 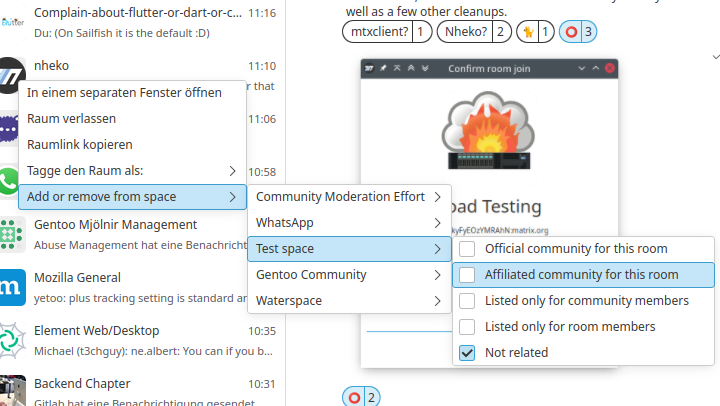 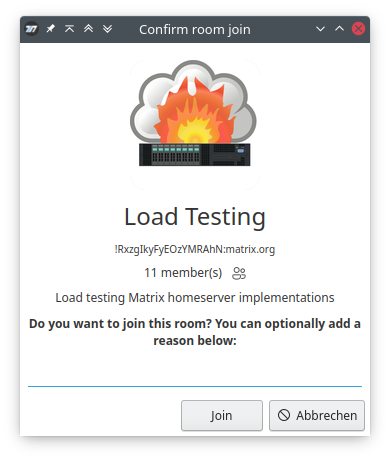 On July 28 project marked its one-year milestone. During this time it has grown at an unexpected rate, both in terms of development as well as popularity. This is great news, so let's celebrate that with this birthday edition.

In the case of the roadmap, we are still on that, work on the "Rich input editor" is in progress and will come as the next release. Stay tuned for that!

The update is live on https://app.cinny.in and the desktop app can be downloaded from Github.

Pro-Tip: Join #cinny-space:matrix.org to check out some cool sticker packs. There are some great packs in #stickers-and-emojis:pixie.town too.

Thank you. See you all next time! 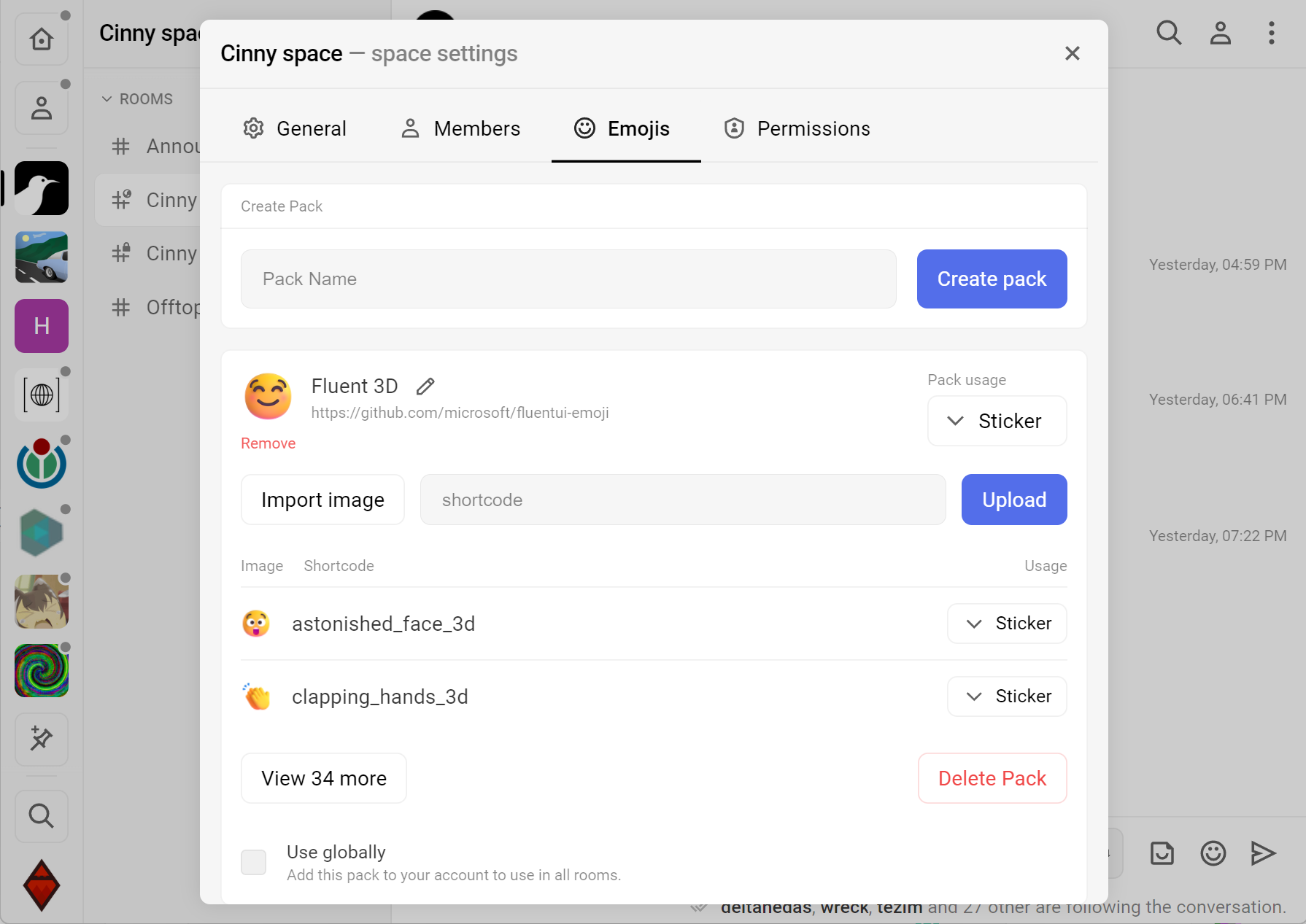 We released a bugfix v0.2.1 . Thanks to nannanko who discovered and fixed this bug. There are also docker images.

A new version of the Ruby Matrix SDK has now been released, adding a new abstraction in the form of a Sinatra-inspired bot DSL, as well as general fixes and improvements. Making a Ruby-based Matrix bot can now be as simple as;

Thanks to Charles Wright, matrix-docker-ansible-deploy now has optional experimental Conduit homeserver support for new installations. This comes as a follow-up to the playbook getting Dendrite support earlier this year.

Next weekend, Sat 20th and Sun 21st, FrOSCon will be taking place. It's a conference about open source software near Bonn, Germany.

There will be some program around Matrix, though I'm still looking for volunteers to help me with a stand and DevRoom.

For the stand we want a small group to explain Matrix to others. For the DevRoom we want some talks and workshops. Anyone's welcome to ask me for more info or to get involved.

Announcing matrix-locust, a new tool for load testing Matrix homeservers, based on the Python load testing framework Locust. It's very early days for this project, but we're already discovering some interesting results. There isn't an official tagged "release" yet, but anyone interested in this topic is encouraged to stop by #load-testing:matrix.org and say hello.

Have you ever felt lost in the Matrix world? Too many rooms and spaces to manage? Well, back by popular demand (with Timo's blessing), I present, The Room of the Week! Every week we strive to highlight a room or a space that we believe deserves attention for discussing interesting going on across the Matrix Network.

This week, we are highlighting: #coffee-discuss:matrix.org

A place to discuss buying, brewing, and drinking everyone's favorite morning beverage of choice! I had no idea there was so much Nuance to this topic until I joined this room . For example, did you know there was a correct way to distribute coffee grounds when you first pour to ensure maximum flavor? Neither did I! Whether you are new to the world of coffee drinking, or a seasoned connoisseur of morning Joe, this room has something for everyone who loves coffee.

If you have a room you wish to see highlighted, join us at: https://matrix.to/#/!bIyiUUnriVoHtYzuPS:fachschaften.org?via=chat.shawnsorbom.net&via=matrix.org&via=fachschaften.org to get your favorite room of the week highlighted.