Happy TWIMday everyone! Thib is away this week again, so I'm covering for him as your host in this edition of This Week In Matrix.

Following up on last week's tutorial about using Docker Compose to install Synapse, this week Thib explains how to use Ansible to deploy your own Matrix homeserver.

Earlier in the year, t2bot.io passed 1 Million known rooms and now it's passed 10 Million bridged users (10,039,915 users to be exact, at time of writing). Most of these users will be people who have participated in a channel/chat on Discord or Telegram that was bridged to Matrix through t2bot.io's free service, with about 500 thousand being active each month.

Approximately 8 Million of the users are from Telegram, covering about 11% of all Telegram users (previously 15% based on information available at the time). The remaining 2 Million are Discord users, roughly 0.5% of Discord's user base. For perspective, t2bot.io has just over 683 Million events in the database and is bridging between 30 and 40 thousand people a day.

Like last time, this is just a milestone update, though it's also a good reminder to host your own server if you can. Element's own hosting platform is a great option if you'd like to have a server without running it yourself, and Beeper offers a richer bridging experience than t2bot.io can feasibly provide. If you'd like to go down the self-hosting route, check out Thib's video guide on hosting synapse or last week's Matrix Live for a better understanding of what hosting Synapse actually means.

As for an interesting statistic: despite not having much functionality that deals with Spaces, t2bot.io can see 2687 Spaces from the wider world. The plan in the coming months is to support a way to bridge a whole Discord server to a Matrix Space, making this statistic hopefully more interesting as time goes on.

The Spec Core Team has been continuing to push forward on the spec. Several new MSCs have been opened recently. The Spec Core Team is available in #sct-office:matrix.org when MSC authors think that they are ready for primetime.

The random MSC of the week is... MSC2162: Signaling Errors at Bridges!

Bridges sometimes are unable to relay messages to the remote service for one reason or another. This MSC proposes a way to allow bridges to indicate that a message failed to be delivered, and allow users to tell the bridge to retry. 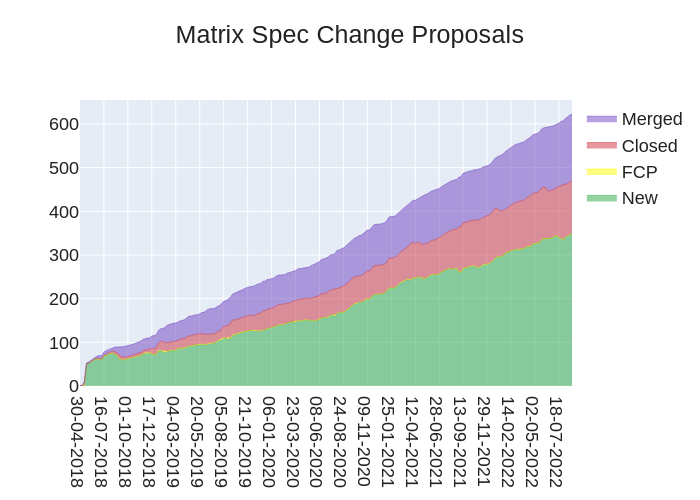 This week we've released Synapse 1.66.0rc1! This upcoming release deprecates delegating email validation to an identity server (more info here) and includes improved validation around user-interactive authentication, support for a couple of experimental features, as well as the usual batch of bug fixes and performance improvements 🙂

As always, any help with testing and feedback on this RC is appreciated! Feel free to drop any feedback or bug report in #synapse:matrix.org and the Synapse repo respectively.

This week we released Dendrite 0.9.5 which includes a number of fixes, particularly for federation:

As always, please feel free to join us in #dendrite:matrix.org for more Dendrite-related discussion.

Thanks to Aine of etke.cc, matrix-docker-ansible-deploy can now set up the new Postmoogle email bridge/bot. Postmoogle is like the email2matrix bridge (also already supported by the playbook), but more capable and with the intention to soon support sending emails, not just receiving.

See our Setting up Postmoogle email bridging documentation to get started.

Actually, he explained it pretty good, so here are some additional links

Source code and Roadmap with implemented and planned features and as usual, say hi in the #postmoogle:etke.cc

A Minimal, simple, multi-platform chat client for the Matrix protocol.

Quadrix v1.2.5 has been released! The update is already available for Linux, MacOS and iOS. The Windows and Android updates are awaiting approval from the respective stores. This release has mostly "under the hood" improvements (upgrade to React Native 0.69, React 18 and other key dependencies), but also fixes a few bugs and brings minor UI improvements.

Please leave feedback/comments at #quadrix:matrix.org or in the issues at https://github.com/alariej/quadrix (stars welcome :-))

Element Call v0.2.7 and v0.2.8 have been released this past week, adding local volume control, full screen mode, audio in screen sharing and, ahem, fixing an embarrassing bug where we broke walkie-talkie mode... 🐑 Oh, and it's also all in TypeScript now. 🚀 https://github.com/vector-im/element-call/releases/tag/v0.2.7

Here is a summary of things that have happened since we last announced v2.6.3 on this channel:

The easiest to use bot library for Matrix. Get started in just 10 lines of code:

With a few people out of office, this weeks has been one of the more quiet ones, but progress has been made non-the-less. Again a lot happens in draft PRs and the background, like with the upcoming Timeline API but also the path forward for integrating the crypto bindings into the js-sdk. There are a few notable PRs merged this week still improving the API (#972 and #973, #961), uprading to latst ruma , removing dependencies (parking_lot) to improve compile times as well as merging the release infrastructure for crypto-js.

This new bot allows users to use webhooks to forward monitoring alerts (e.g from prometheus) to matrix rooms. This means that you no longer have to use E-Mail or Slack to receive alerts. To set it up visit Github Alertmanager or join #alertbot:hyteck.de

Though this release doesn't include Matrix-related changes. Still there are new feature and fixes worth mentioning:

Thanks for all the contributions! 🙌 See the full changelog for details.

Greetings to the world from #matrix-summit-berlin-2022:c-base.org! 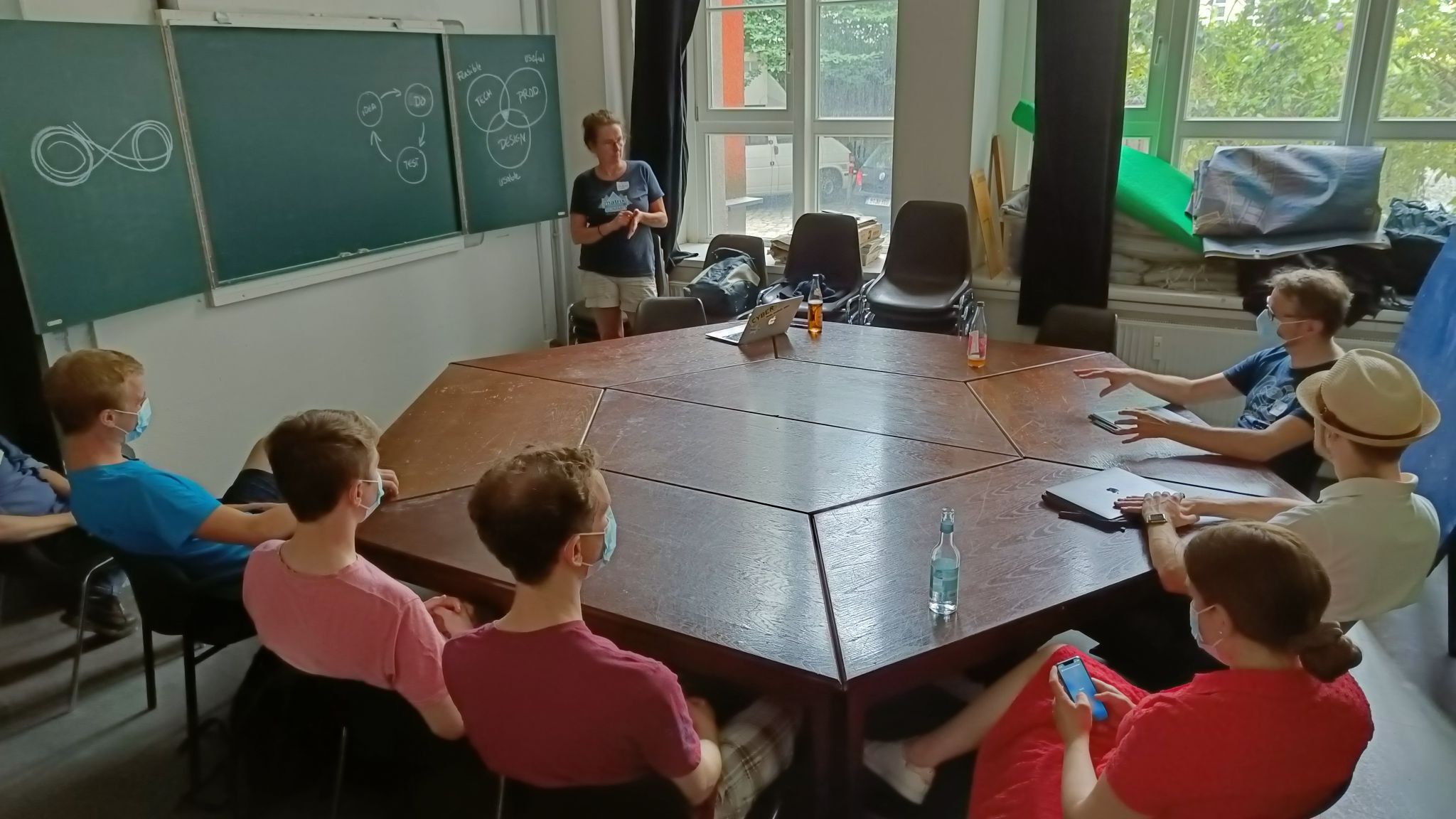 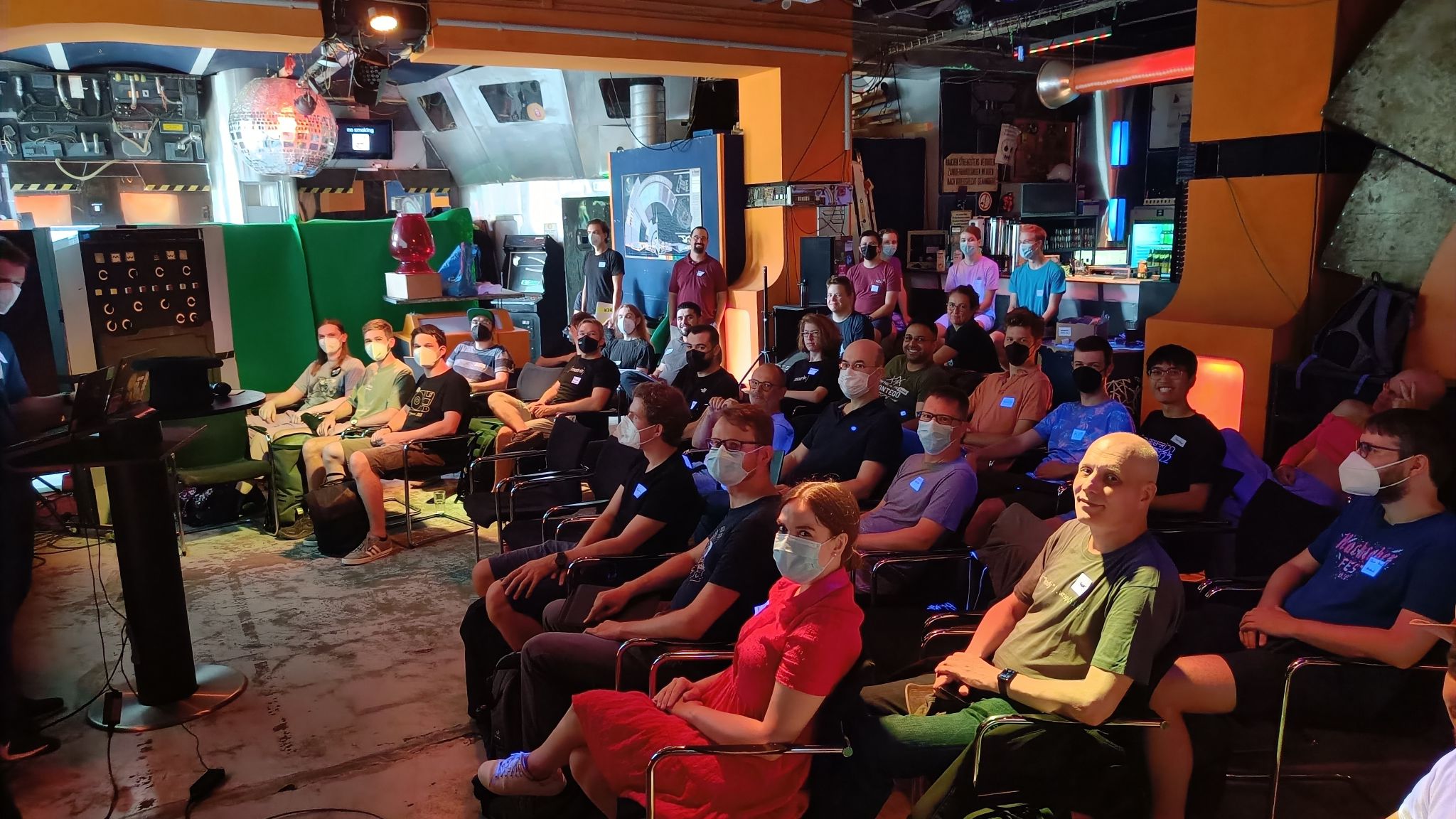 Array in a Matrix reports

Matrix AI that generates messages based off other users' messages using a neural network. The bot trains its GPT-2 model using the CPU and is written in JavaScript (Node.JS) and Python. The project's code can be found here.

Hi all, quite a lot happened since the last twim post a few months ago.

In a nutshell, we refactored the feed page and user page for a better viewing experience. We also now allow displaying and commenting post images in a dedicated view. Also, you can now send follow request using knocking, thanks to profile as space support. (Yes, MSC is coming)

Well... we almost modified everything :D

Stay tuned, event organization is coming soon (you can see the first implementation in the blog post.

PS: For those at the Matrix summit, I will be presenting it tomorrow 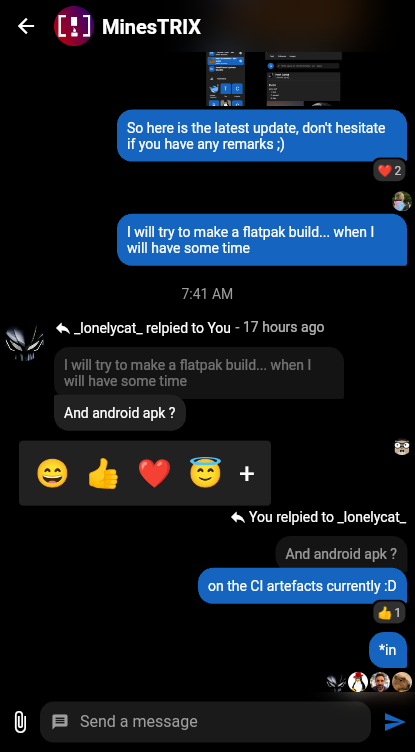 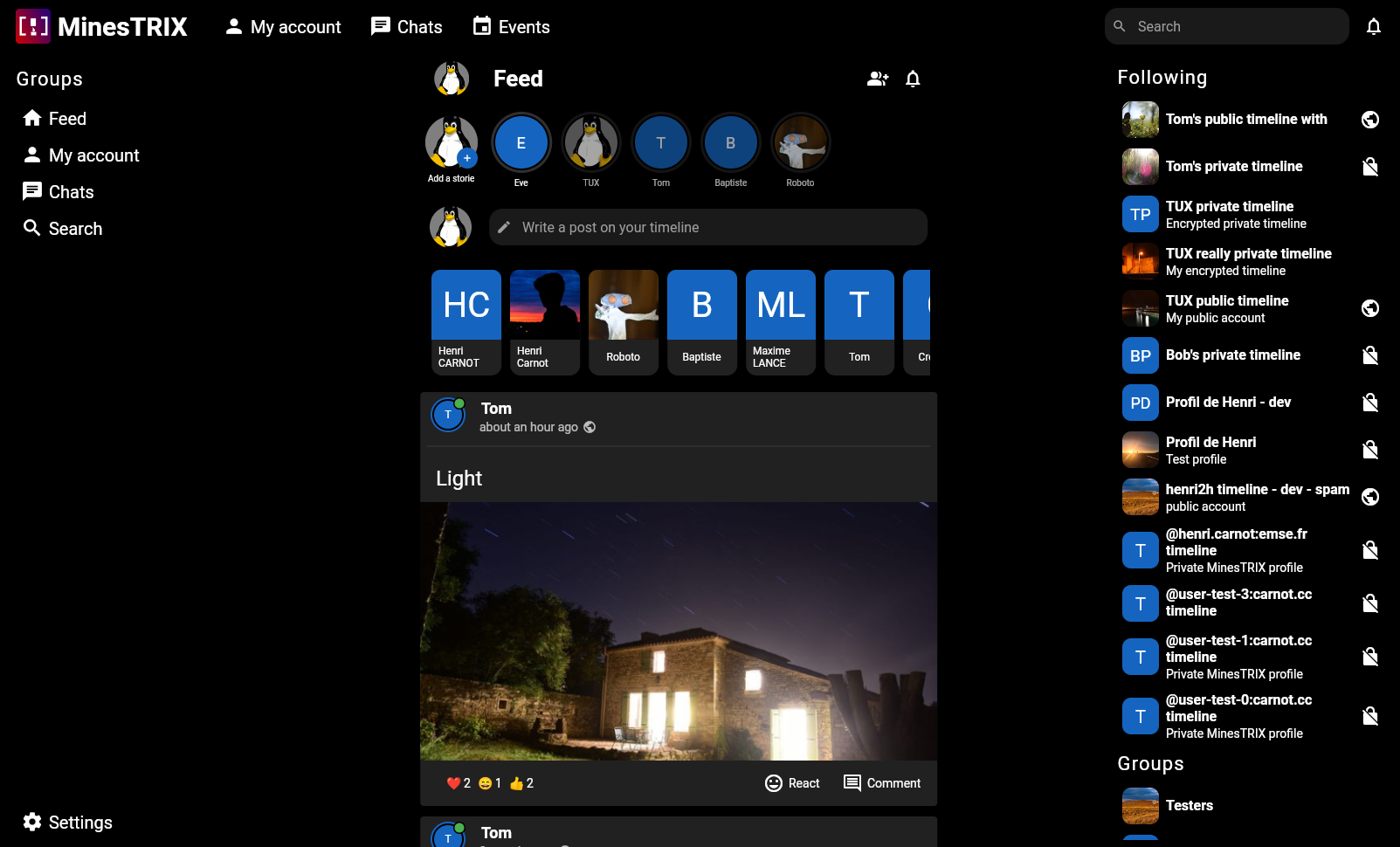 I recently made a blog post / video walk through of Matrix, hopefully it will be helpful to someone: https://www.covingtoncreations.com/blog/what-can-matrix-do-for-your-organization

Have you ever felt lost in the Matrix world? Too many rooms and spaces to manage? Well, back by popular demand (with Timo's blessing), I present, The Room of the Week! Every week we strive to highlight a room or a space that we believe deserves attention for discussing interesting going on across the Matrix Network.

This week on room of the week:

We Are All Tech enthusiasts on The Matrix Network, but do you ever experience Tech burnout? Do you ever wish you could find discussions in The Matrix Universe about things other than Tech? Well, this week we bring you a very technical solution!

Because we are highlighting:

A space where you will find information about everything except technology. Groups are helpfully categorized by Subspace, and feature discussions about everything from musical instruments to beverages. If it isn't about computing, it's there.

If you have a room you wish to see highlighted, join us at: https://matrix.to/#/!bIyiUUnriVoHtYzuPS:fachschaften.org?via=chat.shawnsorbom.net&via=matrix.org&via=fachschaften.org To get your favorite room of the week highlighted.

No ping stats while Thib is away, but you can always join the fun at #ping:maunium.net and #ping-no-synapse:maunium.net!