Carla Griggio, a researcher at the University of Aarhus, is conducting Human-Computer Interaction research on how messaging interoperability affects personal expression and privacy attitudes in online communication. The study consists of a short questionnaire and a 30-60 minute interview about experiences with cross-app messaging (for example, privacy concerns related to differences between clients). The results will contribute an interpersonal perspective to the design of messaging interoperability and potentially influence future policy making.

Interested in participating? Eligible participants should live within the EU and either: a) Have frequent conversations on a Matrix.org client with contacts that use different Matrix.org clients (such as Element-FluffyChat) or b) Frequently use bridges between Matrix.org and other platforms (for example, using Beeper, or Element with bridges to Telegram, IRC, etc.)

Reach out directly to @lalider:matrix.org for questions and arranging an interview. Thank you!

The next major release of the spec is now just around the corner! The Spec Core Team expects to release Matrix v1.4 next week, so be on the look out for the announcement and blog post then! Highlights for v1.4 include Threads and Message Edits!

Review this week from the Spec Core Team has once again mainly focused on Threads as we work towards getting it over the line (and to see client and homeserver implementations stablise). With fixes for notification issues and increased support for querying threads in a room for clients, we expect to see it land in v1.4!

In addition, MSC2676 has been merged to the spec (finally)! This means that it is now available in the unstable space and will be available in the next spec release. Congrats to all involved as it's been a particularly long-running MSC, and especially richvdh for pushing it over the line and writing up the spec bits, and TravisR for reviewing them.

The random MSC of the week is... MSC3265: Login and SSSS with a Single Password!

This MSC actually has a fairly detailed description right in the PR, so I encourage you to click through and see what it's all about! 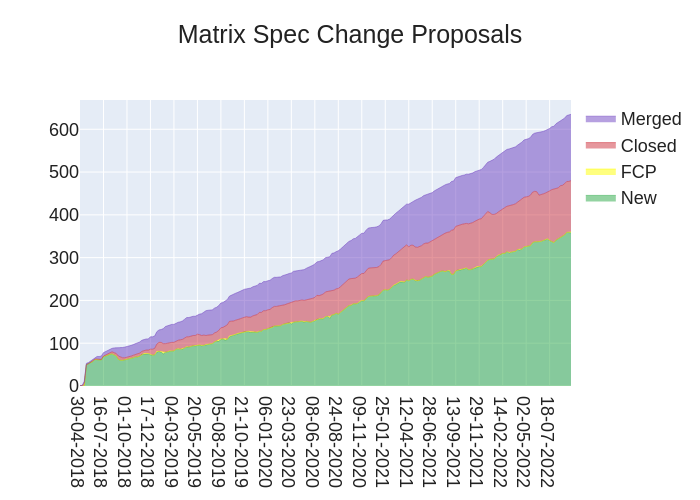 The Google Summer of Code 2022 has officially ended this week and I'm proud to present the matrix-cerberus!

It's an application that has the ability to delegate membership of a room based on a user’s interaction with other third-party services.

Some of the use cases could be:

Note: Both of the cases would require the user to log in with matrix and the respective third-party service in our app.

The application is built using React (frontend), FastAPI (backend) and matrix-nio for the bot. The entire application is containerized with docker compose to reduce the effort required to set up all the services.

Currently, it has support for the following third-party services:

There's also an interesting feature in this app - Room External URL Invites. If you have one of these room external url invites you can just log in as a matrix user with our app and relevant invites will be issued.

You can find documentation related to the usage, installation and hosting over here. If you want to play around with the app and see how it works you can check out the demo version of the app hosted here: https://cerberus.cadair.dev/

And finally, if you have any queries and issues related to setting up or just want to discuss the app then feel free to join: https://matrix.to/#/#matrix-cerberus:cadair.com

Worth noting that the demo version of the app should only be used for experimenting, I make 0 promises for how long it will stay online for!

Construct 0.8 has been rolling out with a set of performance improvements courtesy of the new io_uring(7) backend added to Boost ASIO on Linux platforms. These improvements were not truly necessary since Construct is already backed by a custom aio(7) implementation on Linux, but there's still a significant all-around improvement with io_uring. Users building on systems with boost 1.78+ will benefit from io_uring replacing the core epoll(2) event loop and networking. This has a significant impact for certain operations like sending messages to large rooms with lots of servers by greatly reducing the number of system calls. Users with boost 1.79+ get the added benefit of some local filesystem operations using the io_uring rather than aio. If your distribution ships an older version of Boost, rebuild Construct with the option --with-included-boost=1.80.0 to ./configure so you too can enjoy these benefits.

For questions or support don't forget to idle and perform #construct:zemos.net

This week we've released not one, but two release candidates for Synapse 1.68. This Synapse version will be the first one to require a Rust compiler for installations from a source checkout. 1.68.0rc2 fixes an issue the previous RC had related to this change - so if you were bitten by Rust-related issues when trying out rc1, please try rc2! The minimum required version of Rust has also been set to 1.58 to make it easier for third-party packagers to package Synapse (it previously was 1.61).

Thanks a lot to everyone who help us by testing Synapse RCs and catching these issues early! Please report any feedback or bug in #synapse:matrix.org or the issue tracker, respectively 🙂

In other news, Synapse 1.68 will also be raising the minimum required version of SQLite to 3.27. If you're running a Synapse instance with SQLite, please make sure your environment is up to date!

This week we released Dendrite 0.9.9 which contains some bug fixes and performance improvements — if you are running Dendrite then it is recommended to upgrade! Changes include:

almost Postfix. The biggest change: you can use postmoogle to send emails from your apps, scripts and other tools using standard SMTP protocol (or Matrix Client Server API, if you wish so)

We completely redesigned how you can modify the access rules in a room. You now have a list of toggles to allow public access to a room, knocking and/or joining via a different room. You can also now edit what rooms you can access the current room via. By default the parent communities are in that list and you can enable joining via those using a toggle button, but you can also add other rooms in. This is helpful when you have a welcome room in a private community, but you still want people to be able to join the other community rooms after you explained the rules in the main room. We are still working on restructuring the room settings though, so that the new rules UI doesn't seem as out of place between the other settings. 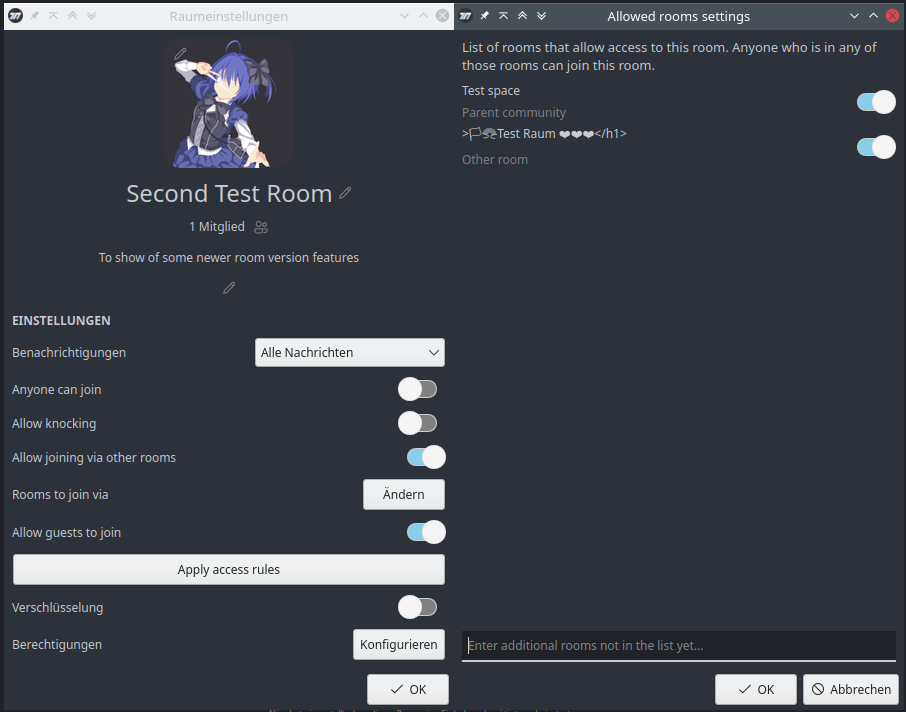 Nheko now also shows you what community a room is in and allows you to switch to that community or join it if you haven't yet. This should make it easier to discover communities and related rooms. In this case too, we built the feature, but I am not happy yet with how it looks, so it might change in the future.

q234rty also fixed sending messages using the Enter key, when an input method is active. We significantly shrunk our flatpak images (to almost a third) by using the upstream gstreamer again (which is recent enough in the recent runtimes now). Thanks to Forest users now have significantly more control over what Nheko logs when troubleshooting an issue and Hiers added an unread line to make it easier to find where you left off. (The blue line is the unread indicator, the names and avatars are just replaced with color boxes to protect the innocent.)

As you can see there were lots of new features that might need some time to figure out the UI, so feedback is welcome as always in #nheko:nheko.im.

This week, Bharadwaj implemented showing link previews. While working on E2EE, support for showing stickers broke a while ago, which James now fixed. I (Tobias) finished the work on basic device verification; it will start working once libQuotient officially supports it. I also implemented support for reporting messages to the server admins. 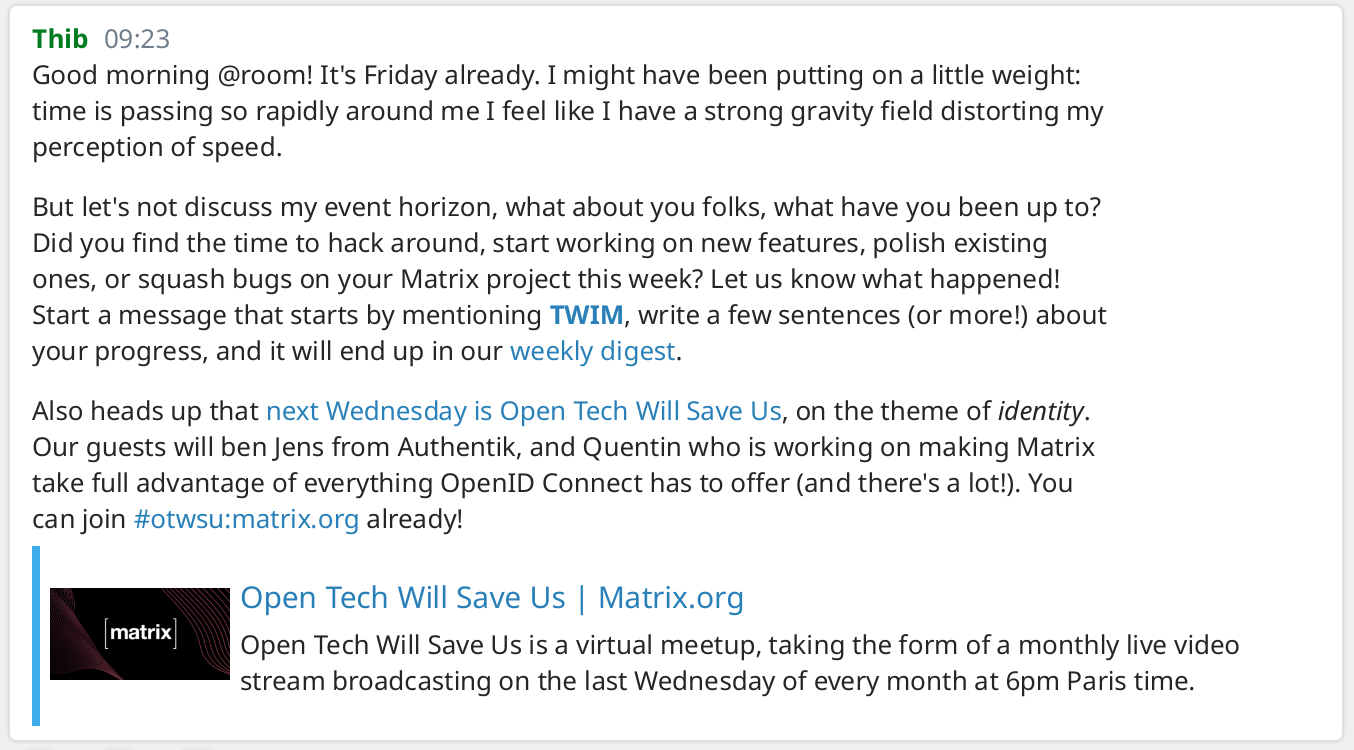 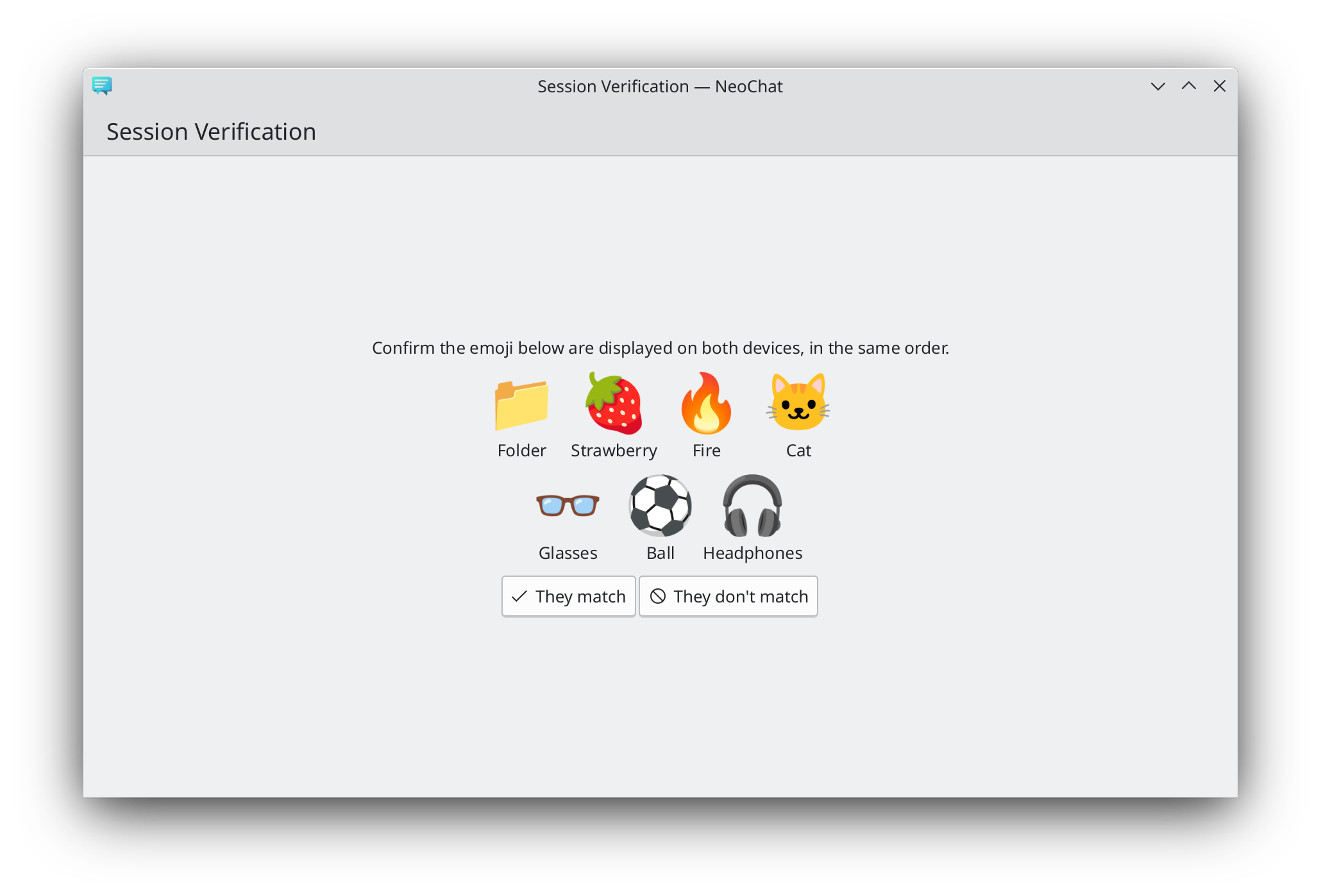 Hi 👋 It's just the VoIP team this week, but we're excited to share that Element Call is on its way into the app! We've added an experimental implementation of Element Call video rooms in Labs, which you can try out on develop.element.io and Nightly, and are working on bringing native group calls to text rooms as well. Thanks to everyone who contributed to last week's community testing session, and please keep the feedback coming. A TypeScript/JavaScript SDK for Matrix bots

matrix-bot-sdk has just had a v0.6.2 release with mostly bug fixes this time around. Please give it a go, and if you run into issues please report bugs or visit #matrix-bot-sdk:t2bot.io 🙂

Also, check out the matrix.org guide to learn more about how to use this SDK.

A very simple bot to notify rooms every 12h of HSL (Helsinki Regional Transports) disruptions (for instance, cancelled trains, metros, buses or trams).
For now, the bot is very barebones but more is planned:

At some point will also be added more beautiful display of those events but for now the focus is on pure functionality.