With the Spec Core Team aiming for a most-bugfix/maintenance release for Matrix v1.5, I'd like to call out some of the fixes to the spec that have landed in the last two weeks:

Thanks everyone! If you'd like to help get involved yourself with minor spec fixes, check out the list of clarifications on the matrix-spec repo.

This MSC aims to eliminate an ambiguity in the push rules portion of the spec. Specifically, that which arises from how to deal with event fields which have a dot (period) in them - such as m.ts. The problem is that a . in the push rule definition is intended as a path-separator. For instance, if you want to match on the value of the "foo" field in the event below:

you'd write "bar.foo". But if instead of foo, we have m.foo, then you'd be stuck when trying to figure out what field to match against in the following case:

Are you matching against 1 or 2?

This MSC tries to fix this by stating that "matching on a dot in a field name requires that dot to be escaped". So you'd write "m.foo" to mean the field m.foo, rather than a dictionary "m" containing a key "foo".

Anyhoo, check the MSC out and voice your opinion if any of that seems interesting to you :) 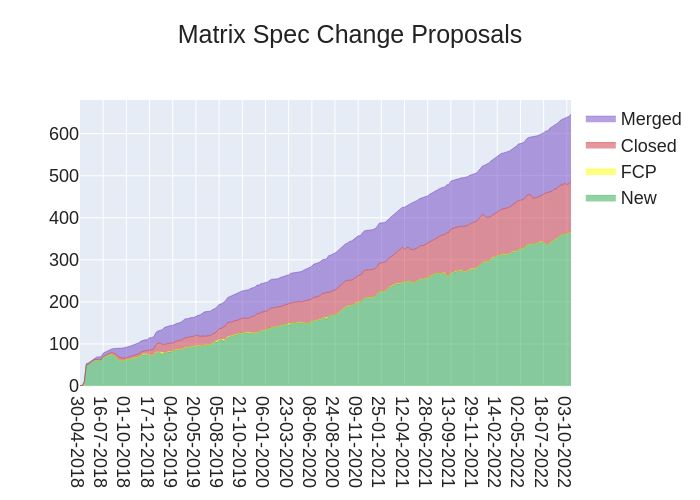 (Just saw this on mastodon) https://www.process-one.net/blog/matrix-protocol-added-to-ejabberd/

It is exciting to see more actors joining the Matrix ecosytem! We strongly encourage ejabberd developers to join #homeservers-dev:matrix.org and to open MSCs if they find clever ways to improve Matrix.

Out of curiosity I wanted to know which server discovery methods various homeservers were using. To get the data, I cobbled together my autodiscover-server-configuration library with a list of known servers from my homeserver's destinations table, which holds 14683 entries (although a few are clearly invalid). After following the discovery flow for every server on the list, it'd also check HEAD /_matrix/key/v2/server to see if the resulting (delegated) hostname is behind a reverse-proxy, or directly connecting to Synapse (or a proxy-server that doesn't set it's own server header). Visualized are the results. Some favorite server names: 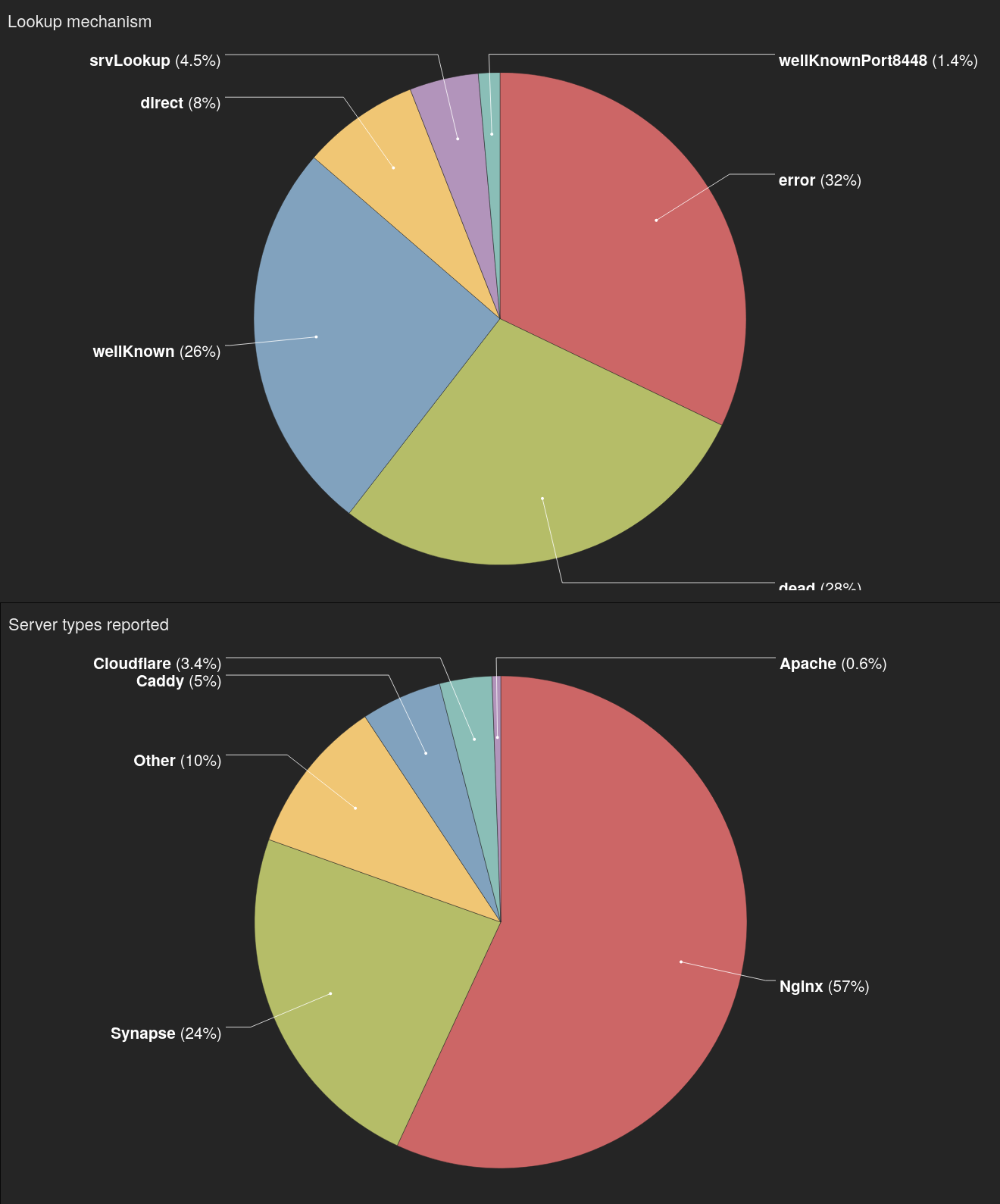 We've been working diligently to make Synapse faster and leaner this week. Some notable items in the release candidate this week are:

plus many more bugfixes, features, and improvements. Check it out here: https://github.com/matrix-org/synapse/releases

This week we released Dendrite 0.10.3 with the usual dose of features and fixes, including:

Hey everyone, it's been a long time since my last TWIM post. I just want to tell you that the refactor branch was merged to next and a few useful fixes have already been merged:

You can expect a new Conduit release very soon, if you have any last wishes for small features or bug fixes, please tell me now :)

I currently work on Conduit in my free time, you can support me on https://liberapay.com/timokoesters PS: I'm also looking for Conduit grants and jobs for when I finish university next year, contact me if you have ideas

Haven't managed to report on these for a bit, but my Helm Charts have been keeping up-to-date nonetheless. Currently sitting on element-web 1.11.10 and matrix-synapse 1.68.0

There is so much spam on the internet....

But no, that's not a new article on Medium with whining about modern society and technologies, it's Postmoogle v0.9.7!

It already had abilities to send and receive emails, had huge amount of customization options and permission management.

Now we added the anti-spam options, both "standard spamlist" things to reject emails by email address, domain name or even localpart and "advanced checks" to reject emails from senders without MX records or when the sender email does not exist for sure.

So, check out the source code and say hi in #postmoogle:etke.cc

Another year, another Syphon release (I jest, but it has been a while)!

The long awaited 0.2.14 release has been cut last week. Unfortunately, due to CI issues, not all official builds are available yet. As most of the core team has been rather preoccupied with life lately, some delay is expected, but they are on the way!

In the meantime, the GitHub release page contains the successful builds, including Android and MacOS x86, and the full changelog for this release. Some highlights from the latter include:

As always, massive thanks to all contributors, especially @EdGeraghty and @Florian-Sabonchi who single-handedly accounted for more than 3/4 of the changelog!

Finally, as a reminder, we now have a Syphon space. Feel free to join us for support, development discussion or just a friendly chat, at #syphon-space:matrix.org.

r._.hit has been working on voip call v1 support as part of the Google Summer of Code. Calls v1 are an improvement over the existing v0 call spec, which should make the calling experience much nicer (however they are still an MSC). As part of his work Nheko now mostly supports the v1 signalling. There are some improvements still missing like allowing multiple streams for screenshare instead of compositing them locally and a few more things, but the bulk of the work is done now. Thank you very much for working on this.

In other news Nheko now evaluates pushrules locally, which means you can now get notifications on servers that don't support the /notifications endpoint properly and you can properly get notifications for encrypted messages. Since this is quite a large change, feedback is welcome. We also broke our dbus API to make it faster. When listing rooms they now don't include the avatar, but just an mxc uri and you need to manually query the avatar over dbus if you need it. Last but not least, Nheko now supports Unicode 15 in the emoji picker including 🪿!

This week, we have finally fixed one of my biggest annoyances with NeoChat so far: Mentioning a user will now be highlighted in the input field and more reliable, meaning you will no longer have to guess if writing a user's name will actually create a mention. While implementing this, I also added the ability to send room links in a similar way to user mentions.

The image viewer has also been improved significantly: It will now only cover NeoChat's window and includes quick actions to resize, rotate and save the image

libolm 3.2.13 was released this week. This is mainly a maintenance release to fix compatibility with node 18. There was also: a minor change to the Python packaging, documentation updates, and a slight improvement to the pkgconfig file. Most people will not need to update.

In this snippet, rules such as f"{prefix}echo <message *>" would be treated as required literals, with the usage of \<> to denote arguments. The optional usage of python's f-strings feature also makes inclusion of variables such as prefix more intuitive and flexible. For more information on the simplematrixbotlib version 3 matching api, please checkout the relevant issue at https://codeberg.org/imbev/simplematrixbotlib/issues/4 or room at https://matrix.to/#/#simplematrixbotlib:matrix.org .

After the release of 0.6 a few weeks back, the team has removed a lot of legacy code that will be dropped by the next release. Most notably the previous experimental timeline API has been removed and was replaced this week with the new stateful-messages timeliness API, which will soon be available via FFI, too. Meanwhile the sliding sync extensions are still on-going as a recent rest showed that the internal test-client jack-in fails to pull events via the API - investigations are under way.

While iOS libdispatch integration work took place behind the scenes, the android team has shared their first steps for full sdk based element-x.

Until now, people who wished to make additions to the Synapse container image had to make a fork and build it from scratch. This new feature makes things much easier. To learn more, see this changelog entry

This Synapse-customization feature was developed in an effort to assist another feature which we've landed today: synapse-s3-storage-provider support.

Have you ever wanted to have a specific color MXID in Element? I certainly have, and so I'm pleased to announce mxid-color-gen, a small utility which can help you predict what color your MXID will be assigned before creating your account. Gone are the days of creating accounts until you get a color you like (or is that just me?).