AnsibleFest 2022 happened this week, and the work the community has been doing with Matrix got quite some attention! We got a mention during the Day 1 Keynote (YouTube) and again during an interview with theCUBE.net. Both are worth watching 🙂

Thanks to the shoutout from Adam in the Keynote, we've had 40 new people join the #social:ansible.com room 🚀 and lots of interest in Matrix at the Fest Community Booth. Huge thanks to @maxamillion:one.ems.host and @cybette:ansible.im for their time! ❤️

The Spec Core Team are continuing to work on spec maintenance in the run up to Matrix v1.5 (due next month!). Again, if you'd like to help out with small fixes and corrections to the spec, feel free to take a look at the list of open spec clarification issues. Thank you!

The random MSC of the week is... MSC2700: Thumbnail requirements for the media repo!

This MSC has the goal of clarifying the mimetypes of media that a homeserver both MUST and SHOULD support thumbnailing for. The intention is to give clients a clearer picture of what file formats will receive a proper thumbnail before they are uploaded to the homeserver.

Comments on the MSC seem to suggest that the MSC as it stands does not completely solve the problem: while it does give clients an explicit list of supported mimetypes, the list is quite short. And the list of SHOULD mimetypes cannot be relied on.

The MSC also clarifies that encrypted media should always be uploaded with a mimetype of application/octet-stream, instead of the original media's mimetype, which seems like a welcome and uncontentious point. And finally, it defines 501 M_UNSUPPORTED to be returned instead of an internal server error on thumbnailing failure.

I believe the next step for this MSC is for the current threads to be incorporated into the text; so don't miss the threads when reading it! 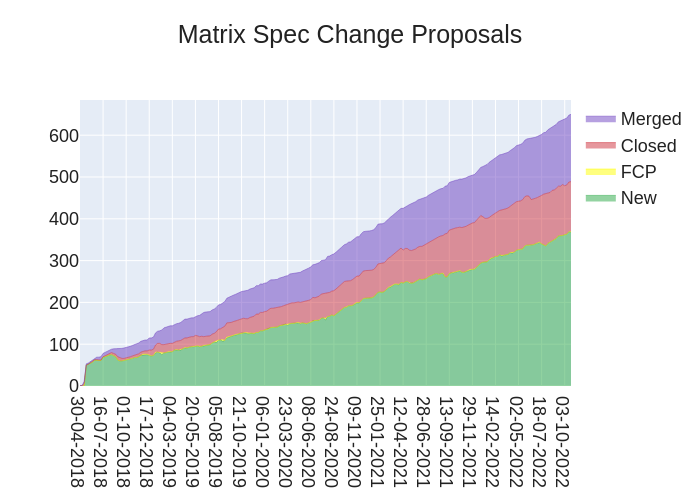 This week we've released Synapse 1.69! It comes with improved caching tools for third-party modules, and support for a bunch of experimental features, such as thread-aware read receipts (MSC3771) and an approval flow for new registrations (MSC3866). As part of this release, we've also laid out the removal schedule for the long-deprecated legacy Prometheus metric names, and the generate_short_term_login_token module API method. Read all about it on the matrix.org blog: https://matrix.org/blog/2022/10/17/synapse-1-69-released

Another big thing in Synapse 1.69 is experimental support for faster remote room joins! You can read more about it on the blog: https://matrix.org/blog/2022/10/18/testing-faster-remote-room-joins but briefly, we are ready for server admins to begin testing, with some caveats. If you've read the post and feel confident, turn it on, give it a spin and let us know how it goes!

Alongside 1.69, we're also disclosing a moderate severity vulnerability that we fixed back in Synapse 1.62. If your deployment runs a Synapse version older than 1.62, and is openly federating, please update to a more recent version of Synapse at your earliest convenience. More info on this in advisory GHSA-jhjh-776m-4765 and CVE-2022-31152.

This week we've also released the first release candidate for Synapse 1.70 (1.70.0rc1). This release will include experimental support for thread-aware notifications (MSC3773) and filtering (MSC3874), improved validation, advertising support for Matrix 1.3 and 1.4, and the usual load of bugfixes and internal improvements. We're very grateful to anyone helping us make Synapse more stable by testing and running release candidates, and reporting bugs to the issue tracker and general feedback to #synapse:matrix.org 🙂

This week we released Dendrite 0.10.4 which contains the following features and fixes:

matrix-hookshot 2.4.0 is here with yet more features!

Nheko now has native builds for Apple silicon macs! No need for Rosetta! If you have an Apple silicon device, please check out the latest nheko nightlies so we can get feedback on how it’s working!

It's been a little while since our last update, but Populus development continues! In addition to the usual bugfixes, we've made a number of ergonomics improvements suggested by the experiences of other users at my university. These include:

We've also made some minor graphical improvements: loading messages are now indicated with a nice low-contrast SVG hint, rather than the literal-minded "loading message" message. Some icons have been improved, and the bartab (lines in the margins) display logic has been improved. And, we're now on the latest JS-SDK version.

👋 Hello form the VoIP team. This week we have a bunch of news. 1) We released Element Call version 0.3 with a lot of UX polishing including i18n (thx to the great community) and paving the way for a proper 2) integration into Element Web and Desktop. If you want to give it a try:

While the sliding sync extensions are being tested and bugs found during the tests reported and fixed, the FFI for the new timeline API has been approved and merged this week. The third big chunk that was merged this week, was a refactoring to Replace QR with SAS verification and the yet to be merged signaling for SAS verification.

While forcing the (not clearly spece'ed) sending of authentication tokens for get_profile and get_display_name, we've also noticed a bug where we sometimes, unintentionally include the access_token in debug output - and fixed that. We will be providing a patch release and RustSec about this soon.

Other than that, this week has seen many smaller fixes, like making the store-setters on client-builder actually adhere to the builder pattern or removing string from storerrors, and improvements like the API to set local trust or setting workspace wide dependencies for uniffi and others.

Zoo 2022, a Commodore 64 Demoparty has decided to bridge it's various chat channels via Matrix. You can join via Matrix, Discord, IRC or Telegram and participate in the party programme. The actual party will be held 28.-30.10 in Orivesi, Finland. https://2022.zooparty.org/

our friends at Bluesky announced their application protocol for building decentralised social media called AT. While not based on Matrix, there are some parallels, and some stuff we may be able to get inspiration from around portable identity :) https://blueskyweb.xyz/blog/10-18-2022-the-at-protocol