Here's what happened in spec land this week:

The Spec Core Team have chosen the following three MSCs to focus on for next week: MSC 1270 (URL resolver in media), MSC 2366 (accept in verification), and MSC 1849 (aggregations/edits)

This week we put out Synapse 1.6.0, and 1.6.1 checkout all the juicy details in the blog post. Aside from that message retention and ephemeral message support continues and we expect the latter to merge early next week.

The next big thing we’ll be looking at is sharding out the Synapse master process so that instances running in worker mode can make full use of the CPU power available. This will make a big difference to matrix.org.

Several packaging projects have been updated to deploy the new version

The container image with the updated LDAP auth provider over at https://gitlab.com/famedly/container/synapse-ldap/container_registry has been updated to 1.6.0 too.

Timothée has been working on a university project to integrate the Yggdrasil library into the CoAP proxy, which allows Matrix homeservers to federate over a pure Yggdrasil connection instead of using IP. The Yggdrasil portion gives full reachability and traffic forwarding between nodes in the mesh even in complicated topologies, and end-to-end encryption as an additional benefit

Yggdrasil is a proof-of-concept mesh network that is designed to avoid the scaling issues that we've seen in the past with existing mesh systems. It uses a spanning tree-based topology and aims to make all nodes in the mesh fully routable, even at massive scale

If you'd like to know more, come chat to the folk in #yggdrasil:matrix.org, and read https://yggdrasil-network.github.io

New Vector (the startup which the original Matrix team founded in order to hire folks to work on Matrix as their day job) are currently hiring people so if you ever wanted to work on Matrix full time get in touch.

You can read all about it here but we are particularly keen to speak to people who want to hack on Synapse or work in Operations.

We are remote friendly though find it easier to hire people in some territories than others, so if you have any questions just ask.

You can apply via the site, or alternatively reach out to @neilj:matrix.org (engineering) or @nadonomy:matrix.org (design).

On top of this, Neil Alexander, creator of Seaglass and maintainer of Yggdrasil, will be joining New Vector. He said:

My fellow comrades, today we have released 0.14.0-rc1 of the IRC bridge. The changes are massive and vast, and frankly it probably could have been done in 2 or 3 releases. At any rate, this release contains support for PostgreSQL Datastores and Sentry monitoring, amongst other small quality of life changes. The bridge has also had a total refactor using Typescript, and it's a little bit nicer to look at now.

Redesign of Ditto is out!

Come chat about UX and things you'd like to see in Ditto!
Matrix room: #ditto:elequin.io swedneck asked if being purple in colour, the project used libpurple? The answer is no, it uses React Native, and he was widely rebuked for doing so.

I spent the last few days building my Matrix client Nio 😄 Apple just approved a very early first alpha for TestFlight distribution. It really doesn't do a lot aside from account authentication and displaying recent chats and messages. It is able to handle e2e encryption, but unfortunately doesn't persist the encryption keys right now (meaning it loses them and re-requests them from other clients on being restarted). It's built on SwiftUI and runs on iOS (iPhone and iPad). The app will likely not run as-is on macOS in the future, but I'd love to also build a separate version of Nio for macOS once the iOS app is functional. Note that this is not connected to the existing Matrix project, matrix-nio.

Continuum and koma, client and library in Kotlin 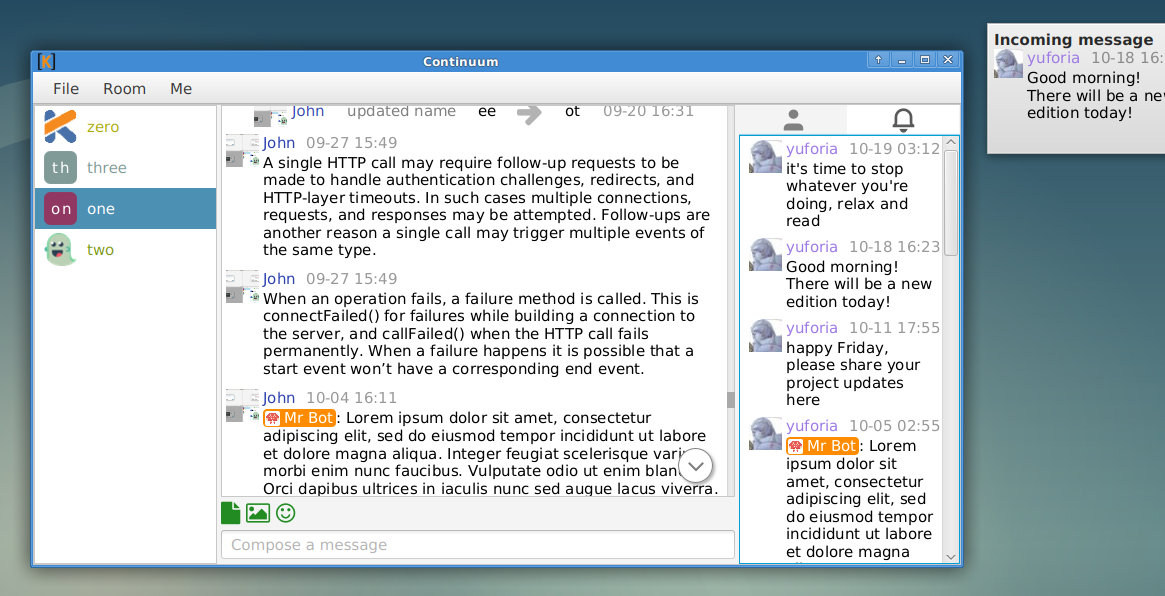 We have a new bottom sheet that we are going to use a lot in the coming designs. We used it in the widget permission screen. Meanwhile we are working on user verification by DM

We made a release this week with all the work around privacy for the use of an Integration Manager and widgets.

All flows for registration and login are now supported. Please test them on your specific homeserver configuration in case we miss something. We are also working on user verification by DM.

matrix-docker-ansible-deploy has switched from the bubuntux/riot-web Docker image to the official vectorim/riot-web image. There should be no visible changes for users. We're just hoping for faster releases by keeping closer to upstream.