It's demos this week!

Yes it's back! For the first time in months we are shipping branded IRL-items featuring Matrix branding. Head to The Shop to stock-up.

In terms of Spec Core Team MSC focus for this week, unfortunately our three MSCs from last week ( MSC2366 (verification flows), MSC2403 (knocking), and MSC2630 (SAS security)) are still pre-FCP. Most of the team has been quite busy with implementation for the past few weeks. Instead of advertising those 3 MSCs again, we're going to switch the focus to "implementation" for a bit until we're freed up again.

So the focus for this week is: MSC implementation work. However, this should not discourage any MSC authors from responding to MSC feedback in the meantime 🙂 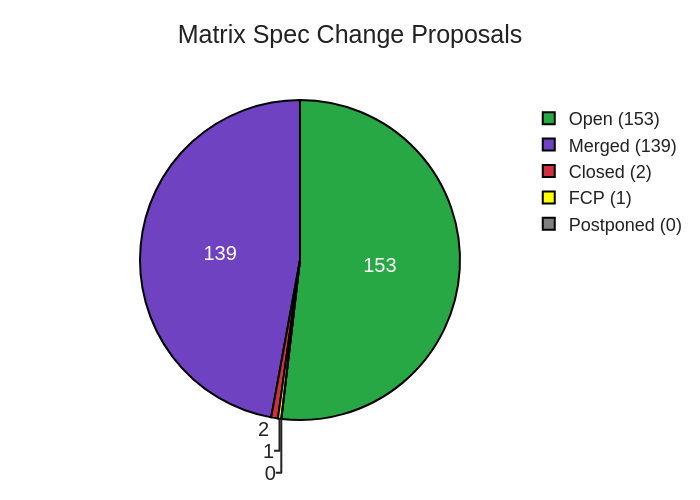 This week in the ruma/matrix Google Summer of Code project, ruma-events was made ready for use! After adding stripped and sync event generation to the event_enum! macro there were only a few small tweaks needed to try it out in some dependent rust crates. I spent a few days converting matrix-rust-sdk to use the ruma-monorepo. Since ruma is used on both client and server-side, I also opened a PR to update Conduit, a homeserver implementation written in Rust. To test that everything worked together, I updated rumatui, my command-line client written in rust.

Then I could test that Conduit sent, and matrix-rust-sdk received the new ruma events successfully. While updating, I felt the pain of not having accessor methods for the Any*Event enums to get at the event fields held within. I have opened a pull request to add the generation of these methods to the event_enums! macro. Hopefully, the Conduit and matrix-sdk PR's will be merged and the ruma monorepo can be tested in the wild!

This week I've worked on the following features for the project "HTML embeddable chat rooms" under GSoC '20:

The user can enter their credentials into the modal dialogue box.

Using the same design as Riot. However, I am just using flexbox and text instead of drawing on an HTML5 canvas. The HSL color is generated by hashing the user ID.

The client now supports guest access. If no access token or user ID is provided in the configuration file, the client attempts to register a guest account on the home server. Room contents are viewed using peekInRoom.

If the guest attempts to send a message, only then joinRoom is called to avoid spam (each page load would lead to a guest joining the room).

SAS Verification is completed and works !

This week has been mainly about testing to ensure that all the progress over the past few months is kept up-to-date and correct. We've also added a few features in order to get certain sytests working. To that end:

In addition, we now have support for collecting code coverage output from SyTest. This indicates we are testing roughly 70% of the Dendrite codebase. The remaining 30% are hard to reach via integration tests (e.g database failures, communication problems between internal APIs).

In total, we've made an additional 45 sytests pass this week.

Mascarene v0.2.0 has been released.

This version implements a minimal set of client API endpoints to work with Riot and allow user registration,

This week I finished the cross-signing PR:

This week we’ve been working on further improvements to event persistence and ironed out a nasty bug where an unusually long state resolution could block the reactor overall and impact send times. We seem to have got to the bottom of this and m.org has improved a lot as of today.

More generally we’ve been trying to characterise matrix.org performance so that we can continue to improve over the coming months.

We are going to focus on:-

As well as tracking the CS API generally.

We are using apdex with a satisfied limit of 250 ms and a tolerating limit of 1000 ms. By the end of the Summer we will aim to hit an apdex score of 0.9 for each area.

For instance here is Federation Send Event Apdex graphed overtime. You can see that we are averaging about ~0.8 currently, so plenty to keeping us busy!

Next up will be to work on Outbound Federation Latency

Aside from that we’ve been working hard on the upcoming Notifications improvements. Mapping the push rules to the demands of the UI has been challenging and we’ve been through several iterations. If you’d like to learn more take a look at Michael and Rich’s explanation in this week’s Matrix Live. Rich’s presentation has Sheltie pictures #justsayin’

It's a Tulir kind of week.

The WhatsApp bridge got a bunch of improvements this week, such as:

The Messenger bridge mostly got bugfixes, but also Matrix->Facebook bridging of all media and location messages

The Telegram bridge now supports logging in by scanning a QR code, although it requires using the master branch of Telethon instead of a release. I also fixed bridging captions in file messages, so they're now bridged as separate messages like with images

Hey all, I've got several releases to talk about this week!

First, matrix-appservice-slack has been updated to 1.4.0 with several quality of life changes such as automatically setting the bot profile on startup, supporting logging out of slack accounts and adding a health checkpoint. There are also quite a few bugfixes so make sure you update.

matrix-appservice-irc was also bumped to 0.18.0 with the headline features being Node 14.x support.

We've also shipped 0.19.0-rc1 which has stopped support for Node 10.x. Why? Because we're adding worker support to the bridge! This release starts to make use of the new(ish) worker_threads feature so that we can dish out processing to separate threads (running their own UV event loops, for node enthusiasts). The first thing to be workerized is metrics, so that metrics may still be reported should the bridge become saturated, but we plan to split out more work as things progress.

Finally matrix-appservice-bridge got a few fixes to support our new worker land, as well as being updated to support matrix-js-sdk 6.0.0. You can checkout the changes for 1.13.1 here.

Fluffychat Version 0.15.0 is released, and should be available in the Play Store, on F-Droid and in IOS Testflight soon! This makes Fluffychat the first non-Riot matrix client that supports Cross-Signing. 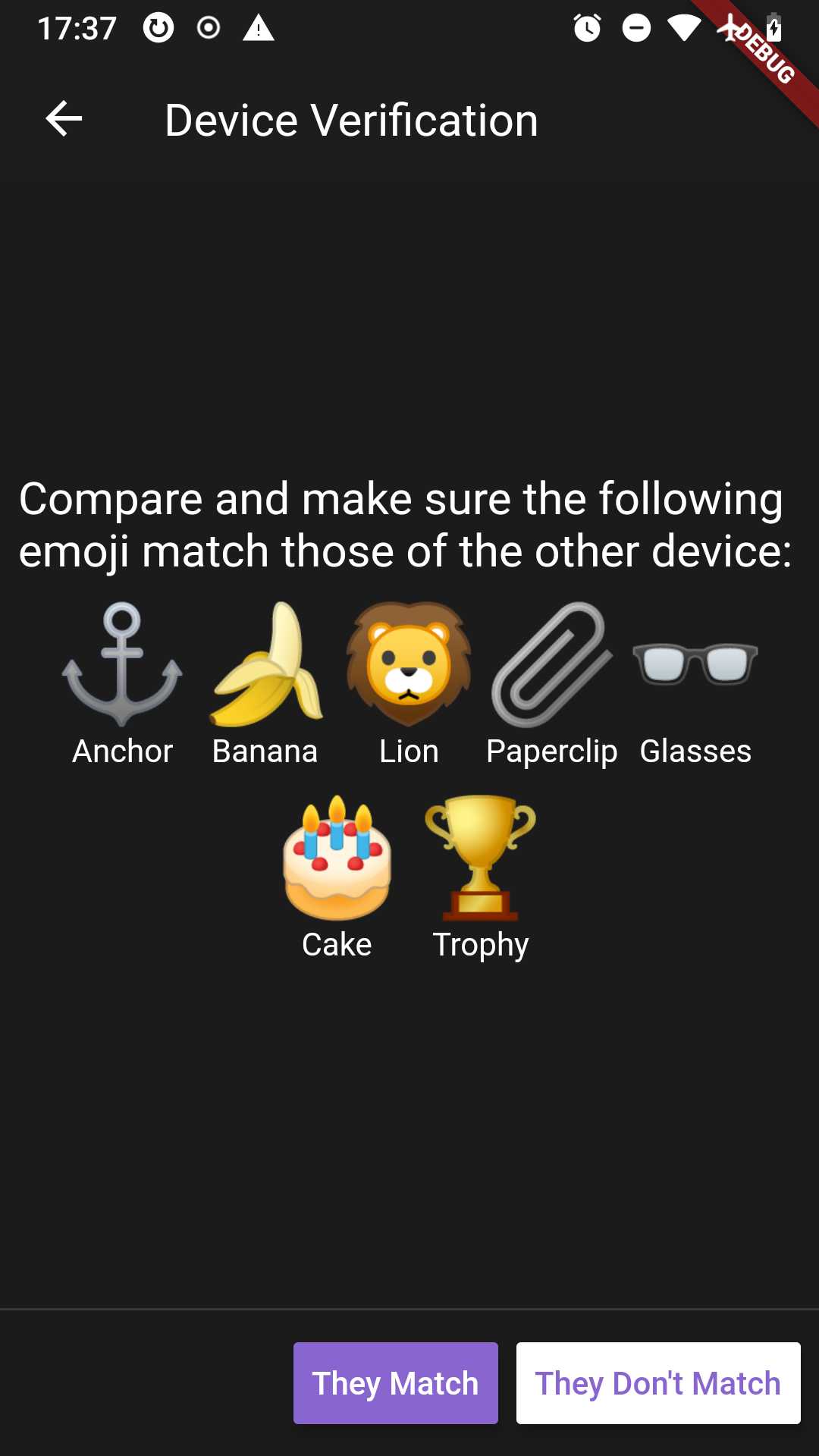 A new version has been released and will soon become available on Google Play, TestFlight and F-Droid! 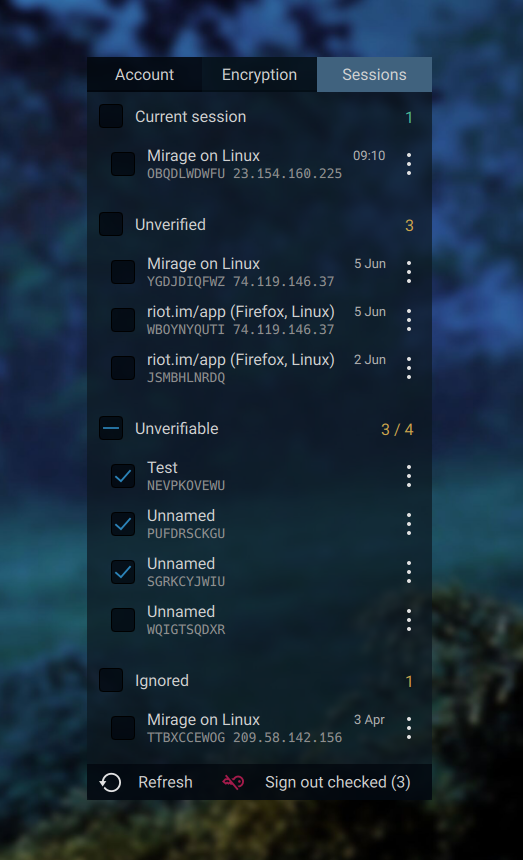 Riot Chat for Nextcloud 0.5.0 The new version updated the Riot.im version to 1.6.6 and added the ability for admins to set their own custom config for Riot rather then using the settings interface in addition to a few bug fixes.

Riot Chat for Nextcloud allows individuals and organizations with a Nextcloud instance to easily set up and configure their own Riot instance with just a few clicks on a web interface without the need to write a config file.

Join the development Matrix room at #riotchatfornextcloud-general:garykim.dev. Check out the source code here.

This week, we completed UX for cross-signing and secure backup. We made associated settings but we still need to polish them.

Sygnal and the new push extension have been updated to match Apple requirement and our privacy concerns. Events content are no more sent anymore. We started to implement the new room notifications settings UI.

This week we were mainly working on cross-signing, room settings, VoIP stabilization and performance improvement.

We will publish at the beginning of next week a beta version of the migration to RiotX codebase on the beta channel of the PlayStore, to be able to ensure the migration works fine, before release it to production.

Get it on pub!

joepie91 discovered this project, presented yesterday at Conference in the Cloud:

Net::Matrix::Webhook implements a webhook, so you can easily post messages to your matrix chat rooms via HTTP requests. It uses IO::Async to start a web server and connect as a client to matrix. It will then forward your messages.

Soru wrote a quick program that scrapes riot-web, riot-x and riot-ios for translations of the emoji names for emoji verification and combines them all into an easily-readable json file, so that other client developers can use it. Since all three riot versions have a different set of translations, it might also be helpful for them. You can find the source code along with the outputted json files here.

"Scandinavia and the World" comic bot

To add to my existing xkcd and CommitStrip maubot plugins, there's now a similar plugin for Scandinavia and the World comics: https://github.com/maubot/satwcomic

Like the other bots, you can self-host it, use my instance (@satw:maunium.net) in your own room or simply join #satwcomic:maunium.net to automatically get the latest comics in Matrix.

A bot that will allow to room administrators and moderators to generate room custom commands (in a similar way how telegram commands are thought).

When they are invoked it will post the message event object data and a predefined context object along with a token to a custom url. More information in: https://gitlab.com/communia/matrix-webhooker

Drupal module to receive links shared from a matrix room. Get links provided by a matrix bot in a room. With this module one can get media from a matrix own bot to any drupal site. Once installed and bot is created through matrix-webhooker bot. A blog entry about it (in spanish) in https://planet.communia.org/content/enlaces-desde-matrix

We have a couple of conferences coming up who are planning to use Matrix as part of their offering, much as we do with Open Tech Will Save Us. To help add some more features, I created an MVP "poll visualiser", which watches a room and works in tandem with the poll-bot from Brendan Abolivier . This project is still at the beginning, but might be interesting to some! Find the code at https://github.com/benparsons/pollvis.