Open Tech Will Save Us 4

The next Open Tech Will Save Us event will take place on Wednesday, that's 2020-07-08! Line-up is confirmed as:

In terms of Spec Core Team MSC focus for this week, as last week we are sticking with "implementation" for now. We'll be back soon :)

This week was the first evaluations, we'll have results to share next week.

This week has seen some new architectural changes and a number of bugs fixed:

This week I didn't have much time to work on Conduit, but together with @the0 we could implement both password changing and account deactivation!

With last week's key backup and cross-signing PR landing in master, here's a list of all major features still missing from Conduit:

Synapse 1.15.2 shipped this week with some important security fixes - if you haven't already upgraded, please do asap! Meanwhile, we're also preparing a 1.16 release with the normal round of bugfixes and incremental improvements.

The big focus in the Synapse team continues to be on performance for larger Synapse instances, which is reflected in the support in 1.16 for running multiple media worker processes. We're working on giving other worker processes the same treatment, so expect more of the same in the weeks to come!

Just pushed the 1.15.2 tags for the K8s-optimized Synapse image.

I wrote a very simple Twilio & Maubot based SMS bridge recently which I've been running for long enough with no delivery errors that I'd consider it stable. It's oriented towards bridging many individuals to single rooms via SMS. You'll need to have a Maubot instance in order to run it.

Tuesday, I did a soft announcement of open alpha for Syphon - a privacy centric matrix client

Please note there's still a lot of work to do and a lot of features missing that other clients have. It's not ready for everyday use.

Please let me know if you have any questions or would like to contribute!

This week we released 1.6.8, and the highlights include:

The previous Fractal update was quite a while ago but we’ve kept busy.

There has been a lot of under the hood work that users won’t notice and which we won’t delve into. In addition to them, we have a few nice things: 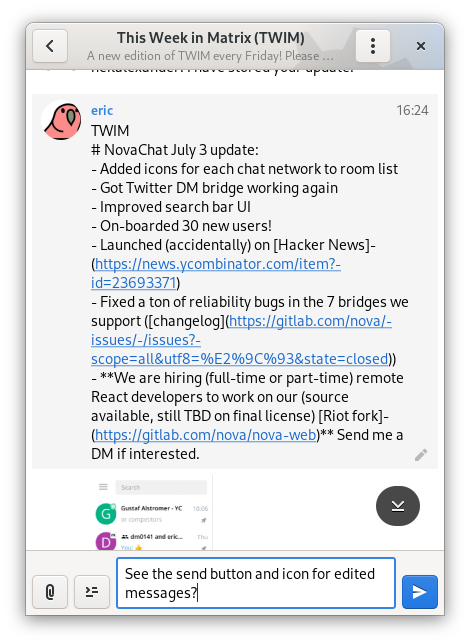 NovaChat has been getting good coverage lately, on Twitter and Hacker News.

RiotX published in the beta channel of the Riot-Android app

RiotX is now published in the beta channel of the Riot-Android app: https://play.google.com/store/apps/details?id=im.vector.app. You can get the last beta version by becoming a tester if you want to. There will be no more update of RiotX on the PlayStore. Current RiotX users should signout from RiotX and signin again on Riot-Android. Riot-Android users do not have to do that. The changelog can be read here https://github.com/vector-im/riotX-android/releases/tag/v0.91.3-beta. And this week we are working on implementing what's remain on our list, and we are fixing as many bugs as we can before the great release.

This week, we made some improvements for the cross-signing UX.

We started to work on the rebranding. And we also made some small improvements in the display of some events in the timeline.

it appears to be puppet week in matrix-docker-ansible-deploy-land!

This brings the total number of bridges supported by the playbook to 15!

I've eliminated most of the bad bugs that were present, so will be doing some feature development for a bit. As of now, the features of the bot are:

Did you ever have the issue that a media event sent from someone is too large for your HS and you don't want to fiddle with the link?

IPFS Bot might be a solution. Invite @ipfs:nordgedanken.dev or Check out https://github.com/MTRNord/matrix-ipfs-bot/ to use the bot.

If you reply to any media event with !ipfs the bot will send you a link to the media stored on ipfs.

We could include this video here, but it seems me appropriate to link to an actual IPFS location.

Hello, I am announcing my first matrix bot - cody - that will evaluate code snippets in your Matrix rooms and return the result. Here is an example interaction:

You can chat with him @cody:bordum.dk and view the source code at https://gitlab.com/carlbordum/matrix-cody

This initial release only supports Python, but the plan is to add support for more languages in the next few weeks. The repo might also be of interest to some of you as it has CI, CD to DockerHub, complete dev environment with cody, pantalaimon, synapse and riot using docker-compose, simple metrics and Grafana-dashboards-as-code.

Nope, it's not dead.

I also made a flame graph of the internal algorithm and I'm surprised by some of the results. The good thing is that I think there's quite a few ways to speed up the algorithm. Here it is:

See you first thing tomorrow morning, and be sure to stop by #twim:matrix.org with your updates!