Demos week is fun! Reminds me of walk-around-the-office-interrupting-people week, which we don't have any longer. :(

Open Tech Will Save Us #8 will take place next Wednesday, join us! Calendar event coming soon.

Here's your weekly spec update! The heart of Matrix is the specification - and this is modified by Matrix Spec Change (MSC) proposals. Learn more about how the process works at https://matrix.org/docs/spec/proposals 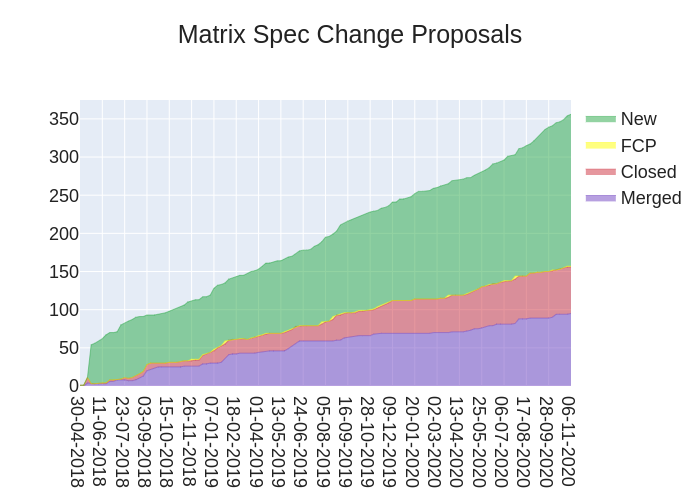 If you haven't upgraded your Synapse in a while, please do.

A major focus of Synapse is being able to meet the performance and reliability needs of massive homeservers like matrix.org. If you're curious about how Synapse's architecture has evolved over the years to meet these scaling challenges, check our our blog post from Tuesday: How we fixed Synapse's scalability!

Lastly, we anticipate releasing 1.23.0 in the next fortnight; keep your eyes peeled for release candidates and let us know if you have any feedback. For a preview of what's coming, check out GitHub for the new commits that have landed on the develop branch since our last release.

Synapse now horizontally scales across multiple python processes, as of 1.22: you can configure it so that events are no longer sent through the main proc, eliminating the single biggest bottleneck for large scale Synapse deployments. Read all about it at https://matrix.org/blog/2020/11/03/how-we-fixed-synapses-scalability

That said, a couple of minor changes have been merged:

Spec compliance is the same as last week:

Element Web integration had been updated to 1.7.9 (1.7.12 available in branch testing)

Exciting visual progress this week with actual bridging between Gitter and Matrix utilizing the virtualUser feature,

we've been iterating on the past couple weeks. Check out the image with all of the user avatars and display name goodness to make both chats on Element and Gitter feel one in the same!

You can also check out the live demo in Matrix Live!

As mentioned in the sync on Monday, I was mostly distracted from Hydrogen this week. (sorry Bruno -BP) I did release the picture lightbox on Monday, and yesterday managed to close 4 bugs. There's also a community PR for better usability and accessibility in the login screen (keep those coming!) and after some work to make encryption more robust, I hope to do a release with all those goodies tonight.

Check out the demos vid for more Hydrogen!

And here’s another nudge, calling for reviewers for that mega merge request for us to switch to matrix-rust-sdk.

Element for Android 1.0.10 has been released to the beta channel of the PlayStore. We will push it to prod if there is no major problem with it. Full release notes: https://github.com/vector-im/element-android/releases/tag/v1.0.10.

This week, we came back to the background sync work to quickly display a notified message in the app. In parallel, we created a profiling tool at the SDK level to track performance like this one.

We are working through some low hanging fruit around post registration, blank screen interaction prompts and toast tweaks. We are also experimenting with SSO for matrix.org. Meaning that Element will give the user the option of either username/password or SSO. Finally, we are continuing our VoIP efforts and nailing down the designs, checkout Matrix Live for all the details. Next week we'll carry on with post registration UX, VoIP improvements.

Hi all! I think this is the right place to share this 🤞. I've been working on a Matrix SDK for Elixir over the last few months as a side project, it's very early days and it's currently just a bare-bones wrapper for the Client-Server API. I've also written the Elixir/Erlang bindings for Olm (currently missing group sessions) which should be added to the SDK soon. The repo can be found here: https://github.com/niklaslong/matrix-elixir-sdk and the Elixir bindings for Olm are linked in the readme.

It is the right place! Thanks cognitive_tea :D

Asked if there were big plans for use of the project

Not as yet, though a few people have reached out to me already and are building on top of it. I started it as a way to get going with Matrix dev and as a fun side project. That being said, I think providing the tools to Matrix-enable Elixir apps might lead to some interesting things. If anyone has any precise ideas on how they would want to integrate their Elixir apps with Matrix, I'd be super happy to have a chat 👍️ Less precise ideas are also welcome, of course 🙂

Hemppa the bot is a generic bot for writing modules as easily as possible in Python. Thanks to issues with Freenode IRC bridge Hemppa got a new module for basic relaybot bridging of any Matrix rooms. Relaybots are stupid, but sometimes there's no working alternative. https://github.com/vranki/hemppa#relay-bridge

I did a talk at Arch Conf 2020 last month, on a generic introduction of Matrix and how to install a Matrix homeserver on Arch Linux. The recording has just been uploaded; it can be found on CCC's media site as well as YouTube 🙂

See last week for the talk!

I stumbled upon this: https://www.reddit.com/r/linux/comments/jozg0v/how_i_got_my_group_chat_to_move_to_matrix/

I love that the comments, even on Reddit, are mostly positive. A really nice report.